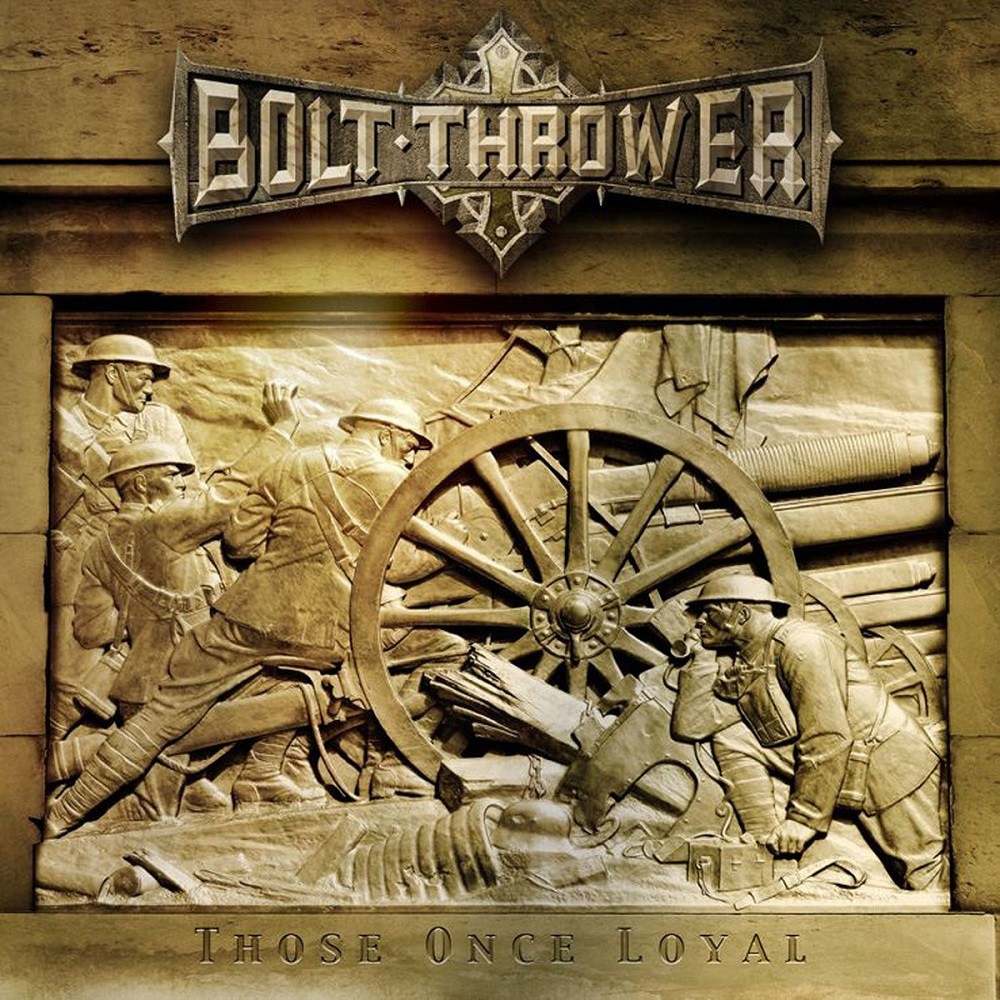 What turned out to be Bolt Thrower's final full length saw the band go out with a real bang.  Sad though it was to see them decide to not go on after Martin Kearns' sad passing their final offering as a band was every bit as entertaining as the rest of their hefty back catalogue was.  A further tinge to the sadness is the belief that they could have carried on and done even more (Memoriam's output alone proves this).

Nostalgia and hope aside Those Once Loyal continued the rich vein of war themed death metal that fans had become accustomed to.  Opening duo At First Light and Entrenched drive forward the Bolt Thrower charge, setting their stall out perfectly.  Coventry's finest never rocked up to piss about and that attitude drips from this record.  The catchy and equally ripping The Killchain pummels away at you for nearly five minutes like some relentless artillery assault, fading in like some raging machine before immediately settling down into a robust chug and cut riff machine.

The power in those riffs never sounded more full or threatening and the menace in the brooding rhythm of the sound feels as assured as it does domineering.   The range and scope of the drums feel deft and dangerous as any sniper looking down on unsuspecting lead fodder.  I never felt like Bolt Thrower were veterans of the metal world, despite them having been around for the best part of two decades at the point of this release.  There was an energy here that belied their years, an urgency and eagerness to the sound that still appeals in bucket loads to my battered and bruised ears.

Having released the largely underwhelming Honour-Valour-Pride four years prior to this release the band took the return of Willetts as a springboard to get things firmly back on track.  We might only be able to speculate on what could have been had fate been kinder but we shouldn't rest too long on that negative and focus instead on the near perfect swan song that Bolt Thrower gave us.

I loved Bolt Thrower back in the day but have never checked out their post-90’s material until now. I admit that I came in with the preconceived expectation that “Those Once Loyal” was going to sound exactly as they did in their 90’s heyday but that only ended up being partially true. The first thing I noticed was the inclusion of quite a few riffs that would fit more comfortably on a groove metal or nu-metal release than a death metal one. There's even a couple that remind me of early Amorphis. I know that sounds a bit unappealing but it actually works quite well in this context. I think the simplicity of Bolt Thrower’s trademark mid-paced drum beats, their solid song-writing skills & the overall tightness of the band combine to prevent these stylistic departures from sounding out of place. I won’t go so far as to say that I love all of these moments but they are definitely not off-putting. There are certainly enough of their standard tremolo-picked bottom-string riffs with driving double-kick drumming on offer to satisfy the old-school fans too. Vocally Karl hasn’t changed in the slightest. His style is still fairly limited but is generally effective & suits the atmosphere nicely. I enjoyed Jo’s bass lines quite a bit. She threw in some nice inventive licks here & there that made for a more interesting listen. The rhythm section does a stellar job really.

Overall I really enjoyed the album but I don’t think it reaches the heights of their classic albums. The small changes in riff style were probably necessary to keep the band relevant in the current market but they don’t appeal to me quite as much as the more memorable melodic moments of the past. There are some belters like “Those Once Loyal” & “Anti-Tank (Dead Armour)” mixed in with some less effective tracks but generally Bolt Thrower can be relied upon to dish out a quality product & “Those Once Loyal” is no exception.