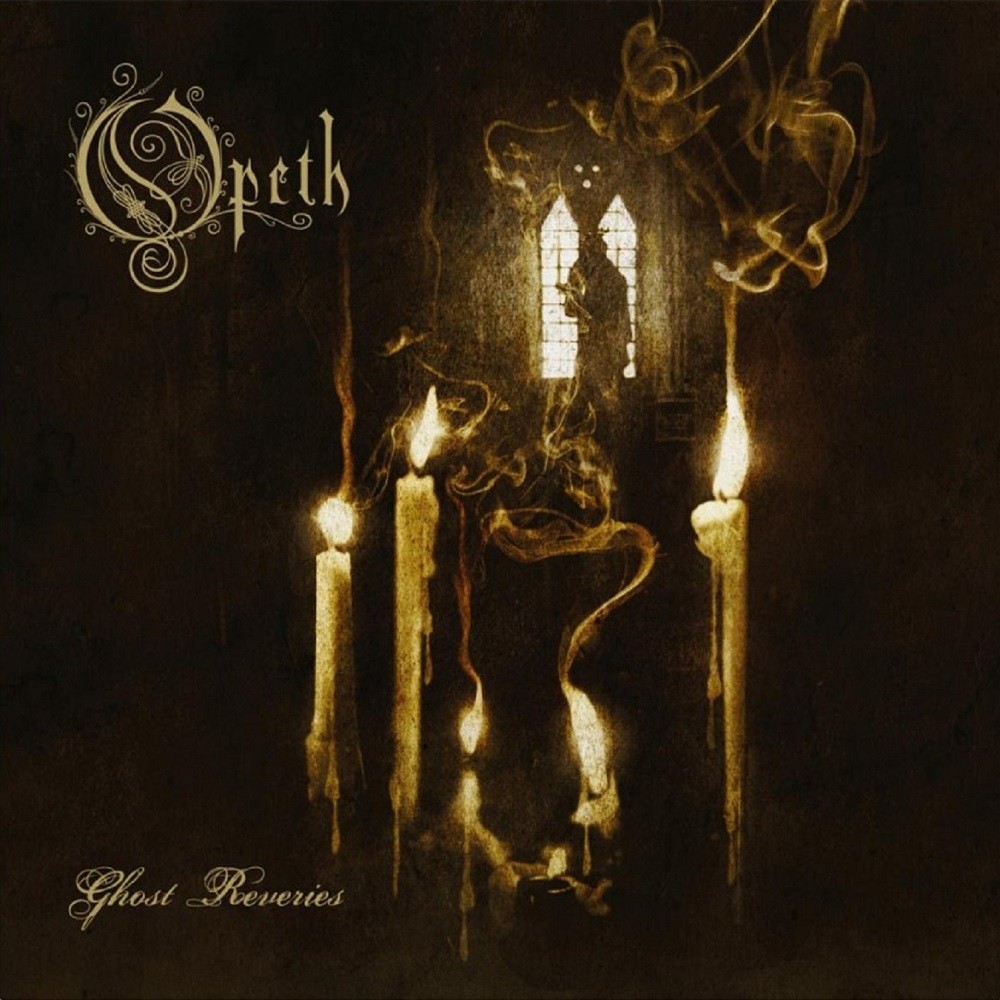 After that mostly dull Damnation album, Opeth unleashes their progressive death metal sound once more with their last perfect album, Ghost Reveries! While most prog-death bands stick to their worse softer side at that point, Opeth releases one more album in their original style better than before. They're true legends from the underground!

The production never ceases to amaze me, once again helping Opeth make their quick return to creating some of the best albums in any genre. You can clearly hear all the time and care dedicated to creating this album. This is also their first to have a full-time keyboardist Per Wiberg, who was a live member during some performances in the couple years before this album, including the live album Lamentations, but was hired full-time to help with Ghost Reveries. His keyboarding playing is spectacular!

"Ghost of Perdition" is a great starting track, beginning with a brief moment of clean guitar strumming before exploding into a heavy groove riff accompanied by Mikael Åkerfeldt's growls like a nicely violent earthquake. The riffing is precisely intricate, which is usual and not too surprising. At one point, Mikael tries singing in a different style, closer to talking but definitely not rapping (thank greatness!). The mellow part is one of the most beautiful here. Mikael sings some notes in that part that are higher than usual (but not falsetto high). Impressive! The high energy continues throughout the song's remainder, ending with clean melodic chanting over the heavy riffing. So great! "The Baying of the Hounds" is where the band really becomes a lean mean progressive machine, beginning with a huge power chord (the exact opposite of the first song's small clean intro) then ringing into awesome progressive death metal. What's unique is the E-Bow and the keyboard setting a spooky evil atmosphere. Eventually there's a staccato riff that would be used more often in this album than previous releases. Once again, Mikael sings clean vocals over the heavy riff-wrath. Because of their previous album Damnation, Mikael has more confidence to sing cleanly more often. During those heavy bits, the cleans sound great yet a little disturbing. His singing carries over to the mellow parts that have Per's keyboards playing along once again for a dark mood. There's also a sick guitar solo towards the end. This song is so heavy, and I'm talking about PURE PROGRESSIVE HEAVINESS. Love it!!

"Beneath the Mire" begins with a small drum roll followed by strange Egyptian mellotron melody over cool guitar staccato by Peter and Mikael, all driven by Martín Méndez's f***ing classy bass. After that is slow groove-paced death metal sounding haunting evil, that might remind some of Hypocrisy. Once again there's heavy staccato riff-rage alongside Mikael's clean vocals. Then the piece becomes beautiful and mellow with Per's grand piano. This is followed by nice clean harmonies before what sounds like a soloing duel between Per's keyboard and Mikael's guitar harmonized. Then there's some more heavy riff-wrath and of course more clean vocals. That's the beginning of the song's epic intense climax. That climax continues with another sick guitar solo, and instead of shredding, that solo is a beautiful prog-ish one. Then it ends with Lopez's fading tom beat. "Atonement" is the first mellow ballad in the album and it's very experimental. Once again, there's Egyptian mellotron riffing, complete with tribal drumming. Mikael uses clean singing throughout the sing and once again does that talking-ish style of singing in the verses. In the chorus, Mikael sings a beautiful high note over Per's mellotron. Lopez does nice well-thought foreign drumming. A nice chill break after that 3-track onslaught. OK, just to stop any confusion, "Reverie" is NOT part of "Harlequin Forest", instead being a pregap interlude. However, the digital version I have ended up putting the interlude at the end of Atonement. Nice interlude though! "Harlequin Forest" is the epic centerpiece of the album. It kicks off with atmospheric metal riffing action and melancholic vocal melody. Lopez is really great at these weird creative drum beats, nothing standard at all! The pattern goes on for a while until it switches to death growling and groove-ish riff-wrath. Then there's a nice acoustic passage helped by Mendez's bass. After that's there only guitar and sad-sounding melodic vocals by Mikael before continue the acoustics. Lopez and Mendez continue playing as the mellowness goes on, with Per later adding atmosphere. This is probably one of the nicest most mellow moments here. It even concludes with guitar solo-ish harmony. That mellow part is so long that it can be a separate song, splitting the actual track into 3 movements. "Part 3" begins with the heavier riffing returning along with Mikael's growling, now sounding closer to slow (but not doomy) death metal. After a bit more of the death-ish growling and riffing, the song ends with more staccato riffing emphasized into E-Bow notes. D*mn, that has been an amazing epic!

"Hours of Wealth" is the second ballad and has absolute pure beauty. Clean guitar is driven along with Per's mellotron. All that and Mendez's bass work simply beautiful atmospheric combo. Now I know I didn't like Damnation for its complete softness, but because the softness is used as a break between heavier songs, less is more! Then everything stops close to the midway point in place of subtle grand piano chords and some of Mikael's most heartfelt vocals yet. Then ending the song is his beautiful blues-ish guitar soloing that goes on for a while. Probably my favorite mellow ballad from both the album and the band! After that moment of mellowness comes one more heavy onslaught, "The Grand Conjuration"! This is the heaviest of the bunch and the main riff is horrifying yet awesome. That's right, it's the main riff! While most of their songs having so many riffs and none of them set to a main riff, that riff is this song's main theme. Some of Mendez's best bass work is in here, driven with distortion all over the song. Once again, Mikael has a new eerie style of clean singing, but the next moment, the song explodes into some more death metal and he switches to growling. Mikael also does great riffing and soloing, including a killer one sometime after the 3-minute mark and one of his most atmospheric riffs shortly after. Then there's probably the most death-ish part of the entire album, sounding similar to Mikael's death metal collabs with Dan Swano such as Bloodbath and Edge of Sanity's Crimson. After a nice little bit of mellotron, Mikael unleashes the most violent scream and growling he has ever done. The only other album to have to fast riffing like in this song is Deliverance, this time made more frightening with the E-bow. Then the main riff and verse comes back. Lopez must've brought in some shaman-ish percussion for the foreign drumming. Then the song ends with, you guessed it the main riff. That song might scare you sh*tless but I love it! "Isolation Years" is one of the most beautiful mellow gems in all of metal or any popular genre. It begins with with slightly dissonant clean guitar and another bluesy solo. The verse sounds like that of their earlier ballads, but it leads to a f***ing beautiful chorus. And holy d*mn, Mikael's vocals are filled with beautiful chills. What's unusual for Opeth but usual for other popular bands is both the short song length of 3 minutes and the mundane verse-chorus structure that's used so well. This is both a ballad and the closing outro which, either way, almost brought me to tears.

All in all, this album once again shows that Opeth is probably the best progressive metal band of all time. I recommend Ghost Reveries for fans of not only progressive metal but also other genres like blues rock and classical jazz. You gotta f***ing own this excellent offering. Opeth's perfect album streak has reached its perfect end!

Favorites: "The Baying of the Hounds", "Harlequin Forest", "Hours of Wealth", "Isolation Years"

A classic, addictive album! Personal favourite highlight tracks from an amazing album are: