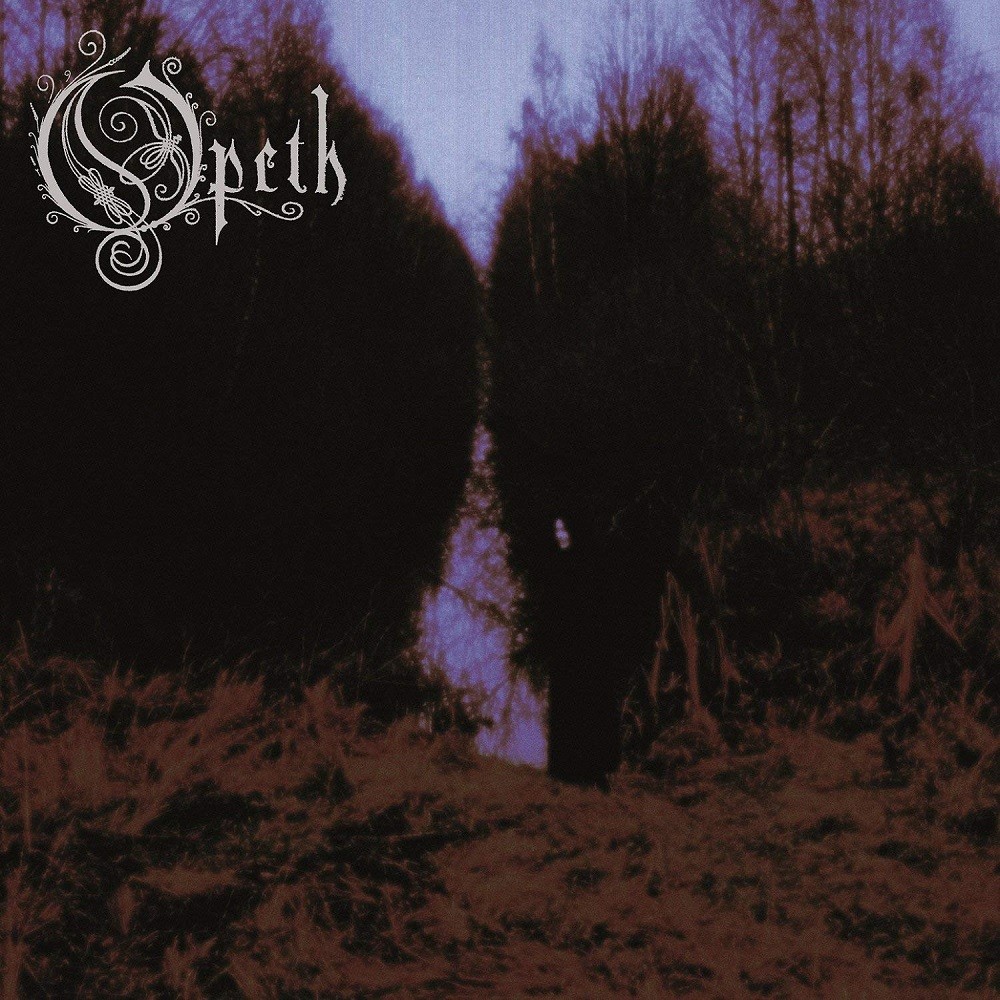 Opeth is one of the most talented bands in metal, much more than most other bands throughout their careers. Those bands would either tremble in fear or feel the p*ssed-off jealous urge to kill them and possess their skill. I consider this album the last part of their starting trilogy, but there are some differences between this album and the previous two. I'm glad that I'm starting this review to conclude their first trilogy and hope to continue with later albums, such as the two-parter, Deliverance and Damnation where they started gaining mainstream praise. This album, My Arms Your Hearse is an underrated masterpiece that deserves appreciation from Opeth fans, new and old.

As I've already mentioned, this album is different from the loose dreamy first two album, Orchid and Morningrise. Here the songs have been tightened up to be much shorter and more concise. I think using this approach is what made this album perfect, and mixing it with bits of the old approach in the next 5 albums (except Damnation) also makes a perfect mix of progressive death metal. All songs here are filled with killer enjoyment throughout this 9-piece over 50-minute thunderous journey!

The "Prologue" begins with 30 seconds of rain before haunting piano echoes serve as a dull yet mostly mystical reminder of the darkness to come. "April Ethereal" blasts off into metal fury with terrifyingly tremendous growls. The pounding riffs at over the 3-minute mark kick things up to brutal heights. Seriously, this is true brutality! Any generic non-progressive blackened death metal bands can s*ck their own gory a**es and learning something new from these true masters. A minute and a half after that, there's slow harmonizing bliss of sublime beauty. This song proves the band's amazing progressive/technical metal songwriting talent that no other band can do with sounding like sh*t. This song will surely convince you and TAKE YOU AWAAAAAAY!!! If you're listen to clean guitar echoes in the next track waiting for the brutal hellfire to begin after 27 seconds, you know exactly "When", with one of the best ever song intros! That song's headbanging moments are some of the most solid amongst a inconsequential guitar bloodbath. Every 3 minutes or so, there's a gorgeous acoustic lead section that most other bands can never do in 3 millennia. Simply epic as f***!!

"Madrigal" is a much better interlude than that prologue, adding true melody to the album instead of just lazily adding a few spread-out notes to extended the length. "The Amen Corner" continues the high flying brutality, perfectly flowing through ferocious riff-wrath, an acoustic section, burning solo leads, and a p soothing acoustic ending. But if there's one song that has absolutely perfect perfection, that would be my album favorite, "Demon of the Fall", a melodeath/doom-inspired progressive metal song and one of the best masterpieces in that genre and by the band! That opening riff can causes massive avalanches from multiple surrounding mountains and bury you in visceral images, but in a pleasant way unlike those torturous stories you're forced to read for your Spanish history class. The chorus worth growling along to ("DEMON!! DEMON OF THE FAAAAAALL!!!!"). You'll also hum to the doom-like melody at literally the last minute, sounding both brutal and catchy. That song is true progressive death metal!

The acoustic ballad "Credence" has heavenly guitar melodies weaving through multiple sections without even realizing it. The clean lead throughout the one-minute outro takes the softness to another level. You have to listen to believe! The last actual song "Karma" has a soft section in the middle of the chaos with lush vocals ("You have nothing more to lose...") before making way for a melancholic strumming section followed by a mourning depressive lead that no other band or artist can ever be good at composing throughout their lives. The last track of this album is the "Epilogue", a beautiful captivating album closer, with mystical jazz organ and amazing leads, especially when they flow towards the end. Add some clean vocals to that track, and it could be Opeth's very own "Sear Me"!

This is actually a concept album, but the concept never interrupts the album's flow and adds magnificence to its dark feel. There really should be more albums like this to spice up the bland scene today. Mikael Åkerfeldt's clean vocals hadn't reach that perfect level yet, not until their next two albums. Although you can consider My Arms Your Hearse one of your favorites, it takes a full listen to understand the glory of this underrated masterpiece. This album has blown my mind, and maybe yours too!

Favorites: "April Ethereal", "When", "The Amen Corner", "Demon of the Fall"

For me, My Arms, Your Hearse is the pinnacle of Opeth's career. Each preceding album had improved incrementally, but this is where Opeth truly become Opeth. This is where they truly earn their reputation as the titans of modern progressive metal.

That's not something I would've written a few years ago. If you had asked me during my teenage years of wholehearted metal exploration, "hey what do you think of Opeth?", I would've half-heartedly smiled and informed you that yes, I do, in fact, like them. But if I was completely candid, I would've also told you that I didn't really understand the magnitude of praise and adoration they received. Their music just didn't consistently speak to me like it seemed to for others. Sure, I loved a few gems here and there such as "Lotus Eater", "Forest of October" and "Bleak", but many of their songs felt dull and impenetrable. Some still do (particularly the albums following this one). I'd had the Opeth discography sitting on my computer for years and I always dreaded going through an album because, even though they were enjoyable enough, it usually left me with an aftertaste of frustration for not feeling them with the intensity that everyone else did. But "My Arms, Your Hearse", shortly after my 20th birthday, changed things. It was the first Opeth album that came to life for me, from front to back, with each song making a lasting impression without forcing it.

I can't explain the sudden change. The first few times I listened to MAYH, it came off as typical Opeth affair - occasional moments of interest sprinkled throughout lengthy passages of monotony. Then all of a sudden, on a rainy summer night in Dallas, a haunting vocal melody popped into my head. "...Run away, run away..." It was somewhat familiar, but I couldn’t quite place it. "…Just one second…" And it wouldn’t go away. "…And I was left with nothing..." Eventually a google search revealed that the ghost in my head was apparently “Demon of the Fall”, a song from an album I'd previously deleted from my library for being “forgettable”. Funny how a song can subconsciously worm its way into your heart and lay there dormant for months, only to resurface at a seemingly random time.

I gave “Demon of the Fall” another try and was immediately hooked. I decided to give the rest My Arms, Your Hearse another chance. And it was like I downloaded an entirely different album this time. I took a midnight stroll despite the drizzle, listening with an open mind and letting it envelope me. Each song, one after the other, came to life as I walked through the dark. They unfolded their beauty before me, as if finally rewarding me for my long-suffering attempts to understand Opeth. The melancholic clean vocal melodies. The cathartically powerful screams/growls. The all-consuming riffs. The haunting acoustic passages. The tragic tale of a ghost separated from his still-earthbound lover. They all combined to create an intoxicating atmosphere that perfectly matched the gloomy, damp weather outside. I soaked it up in all its dark majesty.

Rarely have I ever felt so one with an album. That black metal-tinged riff at the beginning of “April Ethereal” lifted my spirits and I couldn’t help but start running down the path with one fist raised. Mikael Akerfeldt’s screams pulsated energy through my body, evil yet triumphant (It was me, peering through the looking-glass!). My neighbors, if any happened to peek out their windows, would’ve thought me high, insane or both – simultaneously sprinting, headbanging and stomping through the downpour. But it was pure joy. Anyone who has ever had intense emotional connection with music will understand. And it only got better as it went on. The entire section from I will enduueueuuure to the end is simply breathtaking, one of my favorite conclusions to a piece of music ever. When Akerfeldt wails The rain was waving goodbye!, I stopped running and turned my face up at the falling rain, yelling maniacally along with him, arms stretched wide. And just when I thought that was the climax, Opeth ramp the intensity up to a whole other level when Akerfeldt rips out his perhaps highest and most emotional scream ever: TAKE ME AWWAAAAAAAAAY!!!!!!!! Then these perfect harmonized guitar melodies segue in on top and close out the song with crushing contrast. It was one of my cherished musical experiences, that first enlightened re-listen to "April Ethereal", and is still amazing every time. I must've listened to that song 40+ times in two weeks.

But my iPhone didn't sense how awestruck I was, and simply rolled on to the next songs. Though it doesn't reach the heights of the opener, "When" is another dynamic, emotive song that builds up to a big final passage (When can I take you from this place?). "The Amen Corner" immediately pummels you with the heaviest riff on the album. You can feel the narrator spirit's seething anger in the lyrics and vocal performance, perfectly matching the chaos of the instruments. The way Opeth effortlessly switch back and forth between clean/harsh and soft/heavy in this song is something to behold. They go from a The Mantle-esque whispered/acoustic line (Eerie circles upon the water) to sounding as chaotic as Anthems to the Welkin at Dusk in about two seconds as the ghost's love is consumed by hate. The ballad "Credence" slows things down after the violence of "Demon of the Fall" and has really grown on me lately. Opeth's lullaby-style songs usually put me to sleep, but I have a soft spot for this one. It's just so haunting but oddly catchy (Deserted again...). The acoustic outro is pure gold. Then we close things out with "Karma", a fitting conclusion that sees the ghost resigning to his fate of eternal aimlessness (You have nothing more to find, You have nothing more to lose.).

As if that wasn't enough, there are two excellent covers as bonus tracks: Iron Maiden's "Remember Tomorrow" and Celtic Frost's "Circle of the Tyrants". These are probably Opeth's two best covers of their career, here on the same disc. They both do exactly what covers should do: stamp on their own unique identity and ideas while still remaining true to the spirit of the originals. Hell, I probably prefer this version of "Remember Tomorrow" to the original.

All of Opeth's strengths come together on this one. The musicianship and performances are top-quality as usual, but My Arms, Your Hearse seems much more cohesive and memorable than other albums. Perhaps it's because Akerfeldt is focusing his songwriting into one concept/story that he clearly feels strong passion for. Perhaps it's because they did away with the long-winded "epics" found on other albums. Perhaps it's because the production is vastly improved. Maybe it's all of these things combined with some magical golden "it" factor that has mostly eluded them ever since. But it doesn't really matter why. My Arms, Your Hearse has almost everything I want in music and is, for me, far and away Opeth's finest hour.