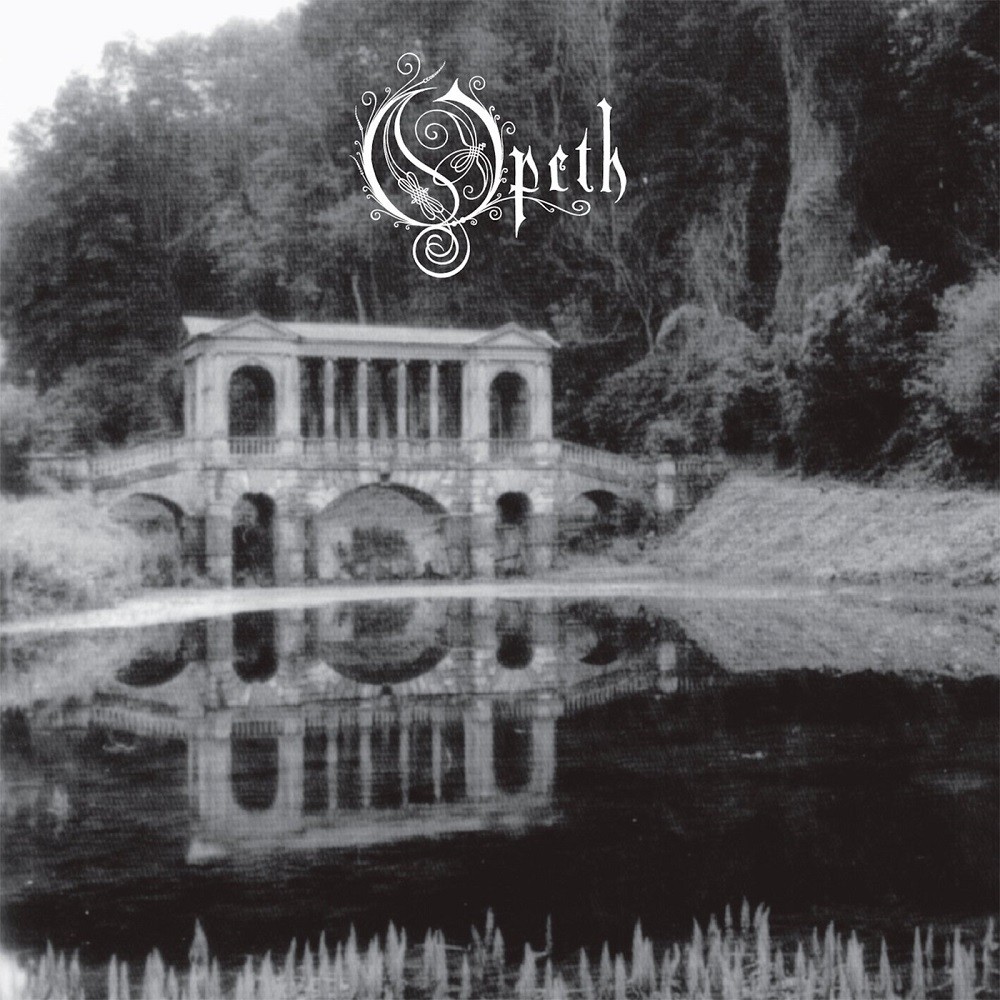 An epic album of typical Opeth brilliance, but a challenging listen at times.

After their Orchid debut captured the attention of the metal scene with its unique blend of death metal with progressive and acoustic elements, Opeth very quickly began working on a follow-up. With no change in line-up, other than bassist Johan DeFarfalla becoming a fulltime member as opposed to the session musician position he held on Orchid, the band once again entered Unisound studio with Dan Swanö in the production seat. Released on June the 24th, 1996, Morningrise again contains a rather striking album cover, which is a black and white photograph of a Palladian style bridge found in Prior Park Landscape Garden, which is located south of Bath in England. It’s without question the album that really sent Opeth’s status soaring and one that many fans still consider the best of their career. I’ll say straight up that I disagree with this sentiment, but would never suggest it is not worthy of attention. Being a huge fan of the Swedes and everything they’ve ever done, I’m always eager to shout plaudits of admiration to anyone that will listen. Yet Morningrise is an album I find more challenging to blindly recommend, and is perhaps a bit too demanding on the listener for my tastes. I still listen to it and find enjoyment, but I simply don’t connect with it the way I normally do with Opeth material.

Morningrise shares many similarities with Orchid in that it combines contrasting genres and explores vast arrangements that refuse to comply with standard song structures. Both albums contain tracks that develop gradually with little repetition, which might suggest a level of improvisation if it weren’t for the precise nature of the compositions. All the various elements are very tidily linked together and the wide array of dual harmonies would no doubt have taken much time to compose. While I found this technique worked well for the debut, which contained more death metal and was consistently captivating throughout, I can’t help feeling that Opeth pushed things a bit too far with Morningrise. The album does include some wonderful sections with extremely proficient musicianship, but the sheer length of the compositions and the at times unfocused, wafting nature of these tracks can result in something very close to boredom. If I concentrate on Morningrise for long periods there really isn’t a lot to complain about, but my focus tends to drift away regularly and before something cool draws me back, another few minutes have passed harmlessly by. It doesn’t help that every track comes in at over ten minutes, with Black Rose Immortal pushing over twenty, and all five contain numerous elements with no common theme to distinguish one from another.

Given the above qualms, why do I still give Morningrise such a high mark? Well, if I get past the album’s gluttonous misgivings, there’s unquestionably excellent music spread thick across the nearly seventy minutes. Each and every track includes multitudes of five star sections and when they show just a little bit of restraint, such as on wonderful opener Advent and The Night and the Silent Water (which is about Mikael’s grandfather who died just prior to recording), Morningrise is very entertaining indeed. Even Black Rose Immortal, which is like the Lord of the Rings movies in that it seemingly finishes several times before spluttering back to life, is for the most part gorgeous. I think Morningrise is a great album to put on in the background while you’re doing something else (such as writing reviews). That way the great bits will draw your attention, while the acoustic meanderings set a nice chilled out mood without putting you to sleep. The band unquestionably learnt from this experience with all subsequent releases being far more focused and utilising more typical song structures throughout. If you're a fan of the band, then you will most likely already have this album and the rest to boot, but if you're new to Opeth, Morningrise is probably not the place I’d recommend starting. You’d be better off checking out Blackwater Park or Ghost Reveries as they're simply more accessible than this incessantly shifting epic.

The first time I tried listening to a few Opeth songs, including one of the songs from this album, 5 years before this review, I didn't like the band too much. The nice acoustics, classic melodies, and cool bass that I enjoy now weren't enough to grab me back then. Now that I love some of their albums enough to fully listen to this band, it became time to listen and review all their other albums in this site. Despite its flaws, I line and appreciate this album Morningrise!

Back in my Orchid review, I've mentioned some of the band's oddities that make them great. Just like that album, their second one, Morningrise has soft production and longer songs. Despite the switches from acoustic to electric and back being random sometimes, there are places that flow smoothly while not going for the coherent look.

The mighty opener "Advent" is a faster tune that the rest. It's a great first chapter of this progressive adventure with good solid drumming by Anders Nordin that isn't as amazing as the band's next drummer Martin Lopez. I also admire the audible stellar bass by Johan De Farfalla, but it's too bad he had to go as well after this album. He performs a nice bass solo close to the end.

"The Night and the Silent Water" is an epic gem, though less intense in some parts. Though I enjoy all the songs, "Nectar" is the shortest song here at exactly 10 minutes but I feel like it should've been shorter. That song lacks heavy energy and long variety, but it still has some d*mn good riffs that prevent me from hating it.

There are two more songs that are definitely the best of this album despite sounding like it could've been composed and polished better, the first being the longest track of the album and by the band, the 20-minute epic "Black Rose Immortal"!! I love this song so much, the best of the bunch and one of the best by the band! However, it's not without big problems in the compositional. The first 9 minutes are full-on epic extreme progressive metal with a couple brief acoustic parts, but right at that mark, the heavy action abruptly stops for a mellow section with a beautiful acoustic riff. I still love that absolute beautiful moment, but that transition could've been less sudden. Anyway, besides that issue, a lot of heavy and calm moments help make that tune the best, leading up to a 20-second growling scream over a one-minute sinister ending. Epic! "To Bid You Farewell" is the other ending highlight, a mostly acoustic ballad except for 3 minutes of heaviness toward the end. Mikael Åkerfeldt uses his clean singing as his sole vocal style for the first time, delivering such an emotional performance, a nice break from his furious aggressive growls from other songs. It's not easy to absorb the complex structure, but it's an underrated song that deserves attention. The next few albums would continue the motive of including at least one prog-rock ballad, but shorter.

Morningrise isn't exactly the most headbanging and recommendable album for metalheads, but the music is still good and can get you into the progressive metal zone. I would recommend listening to this album on a windy Autumn sunset, like I just did when writing this review....

Favorites: "The Night and the Silent Water", "Black Rose Immortal", "To Bid You Farewell"

Like Ben’s review here, I find Morningrise to be real gift and yet also at times a curse.  There’s no denying that there’s some serious work gone into the compositions on display here.  Had I the brain capacity as well as the time to do so I could sit through the whole thing and maybe (just maybe) have enough patience to listen to the whole thing with 100% of my attention.  The fact is though that for all it’s good points, the astonishing musicianship, the expansive songwriting and the ethereal beauty that the whole thing seems draped in the structuring of the record is not well thought out.

There does seem to be elements of a not thick enough filter on the quality control section of the band going into this record.  Competent and established musicians though they unquestionably were already at this stage of their careers they still had a lot of work to do on composition and in song arrangement of the component parts.  Whilst full of largely brilliant ideas the album feels overwhelming and often when listening to it I find myself wanting to like it more than I actually do.  Whenever I find myself able to focus on one element of the album I soon get agitated by the turn of the tide in some regard and end up drifting away altogether for large portions of the record.

That having been said, I don’t feel the album is showy necessarily.  I can’t fault the ability of the musicians in anyway and they aren’t trying to be egotistical either I suspect.  They just wanted to share too much.  There’s enough material over this short track listing to make another album with, at least of the same length.  The progressive and acoustic passages seem more dominant this time around and this is by no means a bad thing.  I don’t think the balance is off in the sense that the death metal elements are too juxtaposed with the cleaner, more progressive elements it is just that they struggle for direction as single entities.

Learning consistency and appropriate use of repetition served the band well for future releases and I guess Morningrise is a real “fans” album on reflection as it definitely showcases the talent of the band and stretches the attention span of all but the most avid listener.  It’s too much for me though and sadly I just don’t think I will ever have the time or regular notion to ever give it my full attention.