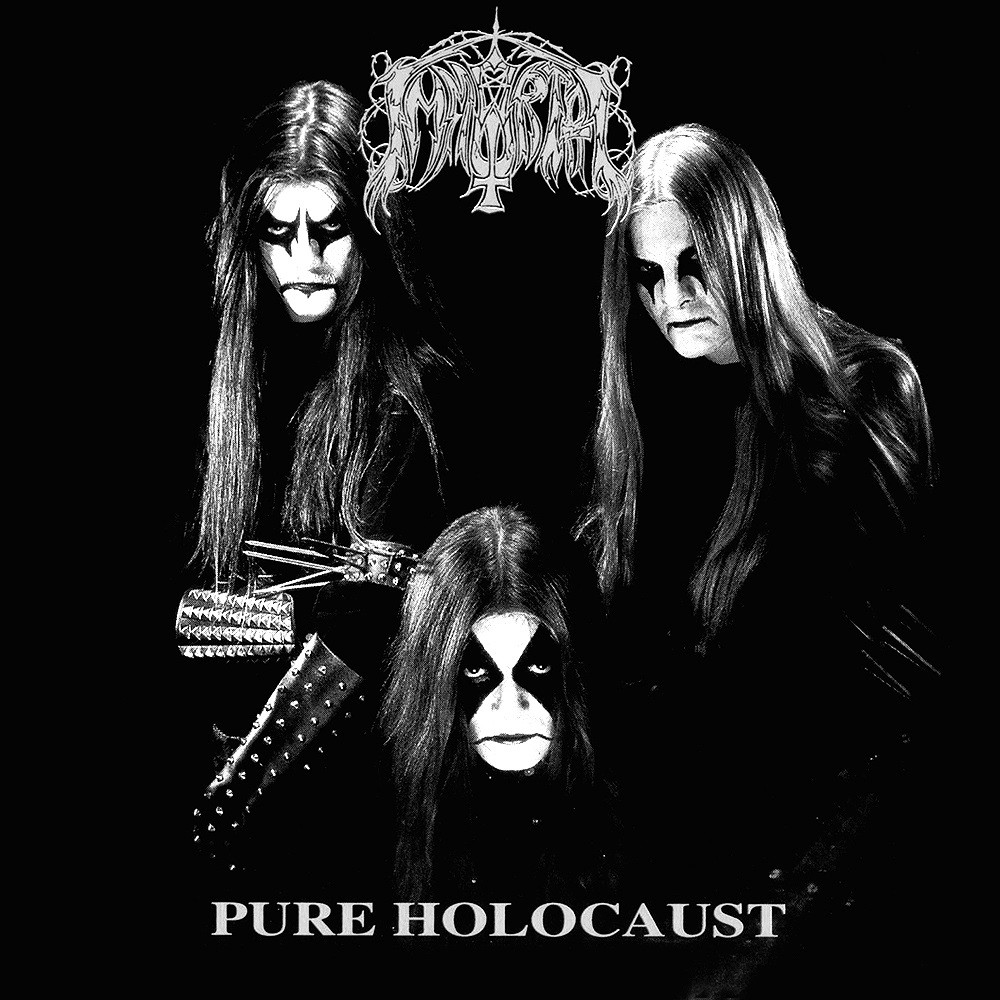 It has always been rather difficult for me to listen to Immortal without having images of a whacked-up Popeye on vocals, knocking back cans of spinach in between each track. While you'd think that this image might ruin all atmosphere and darkness that this album would otherwise contain, I seem to be able to get over it long enough to enjoy what is a legendary album in the black metal genre. Pure Holocaust is a perfectly fitting title for this release as most of it moves at a relentless speed. Even when the rhythm section slows down a tad, Abbath continues his double bass kicking and blast beating as if the guy simply couldn't stop if he wanted to.

Immortal may have been hugely influenced by Mayhem, but they certainly added their own flavour to the genre. The Viking battle element in the lyrics and song titles is matched by the cold, epic feel in Demonaz's riffs. Immortal have always known how to create an extremely icy atmosphere and it's there in spades on Pure Holocaust. Despite my comments earlier, I think Abbath's vocals, no matter how silly they may appear to outsiders, are frickin’ awesome and perfectly suited to Immortal's sound. As mentioned earlier, his drumming is powerful and relentless, but it must be said that it's also a bit messy at times. Quite often I am distracted by a slightly out of time beat here or there that the band clearly didn't care about at the time of the recording.

Flaws aside, Pure Holocaust is a great example of black metal played the way it was intended. Raw, aggressive, and damn cold. Unsilent Storms in the North Abyss is one the greatest tracks the band ever put out (even though unsilent just isn't a word, nor would you ever consider a storm to be silent in the first place) and A Sign for the Norse Hordes to Ride isn't far behind. While there will always be those that do not understand why this album is so good, I recommend anyone that likes their black metal extreme to go check this out. Here's hoping the reformed Immortal will head back into the studio shortly.

Pure Holocaust might be the most "Black Metal" Black Metal album I've ever heard, in both the best and not so great of ways. The early and mid 1900's saw the Black Metal genre explode with so many albums that are now considered classics, with their prominent features ranging from chilling and raw lo-fi riffing to epic and symphonic endeavors. Immortal doesn't dare journey down the symphonic route, but Pure Holocaust rises above the average lo-fi affair that was so common during that time by just doing all of the Black Metal stuff right.

Everything you could ever want out of an early 90's chilling and occult album is here with substantial density, whether its the faded and bone chilling guitar tone, the frantically impressive drumming, or the ravaged sounding vocals. The layering and use of these elements is phenomenal, with the lead and rhythm guitar being most prominent above the insane drumming and slightly pushed back vocals, but Immortal's sound is impressively crystal clear and large sounding as they shred through riff after riff. There are a ton of impressive melodies in Pure Holocaust that shine through thanks to their layered guitar approach, with one guitar shredding away with tremolo in the background as the other carries a chord progression or melody. While melody may be a sacrilegious term for early Black Metal fans, the amazing riffs in "Unsilent Storms in the North Abyss" and "The Sun No Longer Rises" don't lie. Behind all these riffs the drums pound away, with Abbath, one half of the duo that made up Immortal at the time, delivering a truly blistering performance through the entire album. The slower melodies played by the lead guitar get drug along by the chaos of the drumming, giving the album a heavy and sinister Black Metal atmosphere. A few of the tracks pump the breaks on the drumming enough to offer some variety, like the hefty, double bass filled 4/4 rhythms in "Frozen By Icewinds" and the second half of "As The Eternity Opens". The vocals are extremely accessible too, especially for Black Metal this heavy. They have a nice erratic and unhinged quality to them that feels right at home among the blast beats from the drums and the constant tremolo from the guitar. They're also a bit more clear and less vile than other Black Metal vocalists, which I for one appreciate as a nice change of pace.

Overall, Pure Holocaust exhibits all the things that make Black Metal a great genre in a raw but clear form. On the other side of the coin, it takes almost zero risks and can be pretty run of the mill when directly comparing it to the competition since it lacks some of the energy and pure chaos that other albums released at the time have. There are so many qualities that are so well done about it, but nothing is particularly earth-shattering or stunning to me. It's just a really, really good Black Metal album in all the ways I expect a Black Metal album to be. Hell, it's even memorably catchy at some points, with the finale of "The Sun No Longer Rises" and the insanely killer riff of "Pure Holocaust" getting stuck in my head for the entire time I've been writing this review. Pure Holocaust does the best job I've heard of encapsulating a genre, with all of the elements represented in clear and interesting, but safe, ways. If anyone ever wants to know what old Black Metal sounded like, I'll be pointing them straight to Immortal.

In terms of their discography, Immortal’s sophomore album represented a sudden peak in Black Metal mastery that they only ever really matched once more during their time with At the Heart of Winter.  What Pure Holocaust did was take the blastbeat frenzy of most BM of the time and wrap it in hypothermic riffs that chilled the very soul of the listener.

This was the first Immortal record I ever owned.  I heard the debut around the same time but it didn’t stand up at all against this follow up and as I got familiar with the rest of the back catalogue it was soon apparent that not much of anything else could stand up either.  Whilst the aforementioned 1999 release was notable for its vast scope, robust structures and excellent storytelling, Pure Holocaust was almost the exact opposite.  It thrived on relentless aggression, merciless blasting and bone jarring turbulence.  There’s little in the way of variety here and whilst for some records that means an almost certain unmemorable death the sheer audacious nature of the delivery on this record just captivates me still to this day.

I can’t think of many more records that capture the grim and inaccessible nature of BM so perfectly.  There’s an audible arrogance to how Abbath and co deliver this release.  Completely unapologetic and full of unwavering menace and threat throughout, Pure Holocaust should be on the shelf of every Black Metal fan’s library for when their room temperature needs dropping a few degrees.