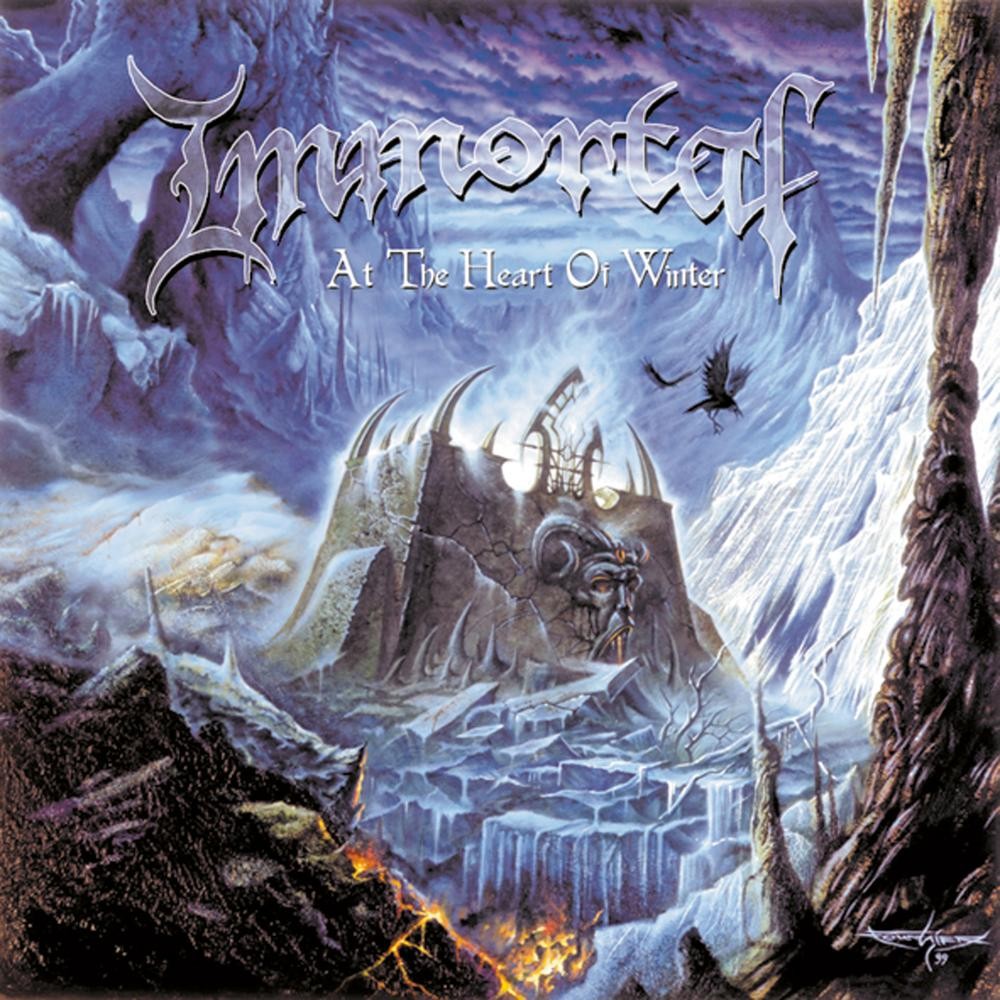 Better Production Values, Still Got It

I'm not a fan of too much production value in my Black Metal. I want it to sound like they picked up their microphones and instruments out of the trash and recorded by playing back to a tape from a static filled amp. This isn't quite that, they found a bit of money to find decent guitars and an actual recording studio. This is still pretty good. I first listened to this album while on a mountain hike in the middle of winter with snow falling all around me. Fit perfectly, if only their was a bit more static involved to feel like the snow really hitting me with enthusiasm.

This is a great album. Immortal still has it into their 5th album and 10 years. They're such a uniquely sounding black metal band, that although they're are black metal through and through you can still hear the melodic tones in this one. I love melodic death metal a lot and though, as I stated earlier, I prefer the low-fi production for my black metal it works really well here. The melodic death metal is a change of pace that I welcome. The melody isn't progressive, it's not trying something new to take you somewhere else, it implants you right where you're sitting and puts you into a mesmerized state that you just want to sit back and enjoy. It takes away the atmospheric elements of nature or symphonic elements of horns and string instrumentation and just lets the guitar alone do it's thing to create a soundscape to fall into.

This is a definitive change of pace for Immortal that I haven't heard before from them or really since. Very unique album along my black metal library that I will be returning back to for more melody that I didn't know I needed.

Listen back to "Pure Holocaust" or "Battles In The North" and you simply cannot deny the cold, harsh and blistering fury of the pace across those records. Relentlessly executed and delivered with real venom each time, they are quite rightly bona fide classics in any BM collection. What "At The Heart Of Winter" brought was a less frenzied, much more calculated assault. With it's immediate use of melody from virtually the word go (check out album opener "Withstand The Fall Of Time" from about 3 mins in for 30 seconds or so as a fine example of how things were going to pan out on this record), measured perfectly by those awesome riffs and thunder toms, man!

This was never a case of Immortal wimping (or selling) out. This album was a point in time for Immortal and at that point they were at the top of their game not just musically but also in the quality of the songwriting. Each track is an epic foray into Abbaths' nightmarish, frozen world only this time there is no searing, ice-cold wind stinging your eyes; instead you have Immortal as the fiery dragon scorching out of the blueish haze, standing proud and stoic over their realm.

The pace isn't doom by any stretch and that is one of the key successes of this album. It might be a change of sound but it is still so very obviously Immortal, Abbath is unmistakeable in his vocal delivery but this time the band are building structures around them. Take second track "Solarfall" and listen as it swoops in and out of fast paced riffs and more melodic passages that help build the imagery behind the song title brilliantly. Nowhere is this more apparent than on the "Tragedies Blows At Horizons", with it's measured development and well reined pace punctuated superbly by dreamy plucked strings and big, bold and plodding riffs.

Of course I am going to mention the artwork too. It's up there with Emperor "In The Nightside Eclipse" in terms of epic, fantasy artwork doing great justice to what lies beneath. It is one of those records that if ever owned on vinyl I could sit gawking at the cover for hours.

By the time you get to the oddly titled "Where Dark & Light Don't Differ" the sense of controlled aggression is all the more evident here with the thrashing riffs and astonishing drum work of Horgh combining perfectly.

If you haven't figured out by now that the title track is going to be awesome then its opening foray of picked strings and haunting keys should be enough of a wake up call. It is a whole 2 minutes before that riff crashes in and Abbath's grim croak establishes itself. Again there is variety galore in terms of riffs, melody and drums on this one track alone. The track gallops along with riffs leaving horseshoe imprints on your forehead as the mighty Immortal beast thunders on.

By the time you reach "Years Of Silent Sorrow" you are still just as exhausted as you were at the end of "Pure Holocaust". Only this time your Immortalised brain has had to come to terms with a melodic style of BM that retains all the harsh, cold and scathing darkness of the genre yet it has been somehow packaged in a solid structure of accessible and thoughtful songwriting.