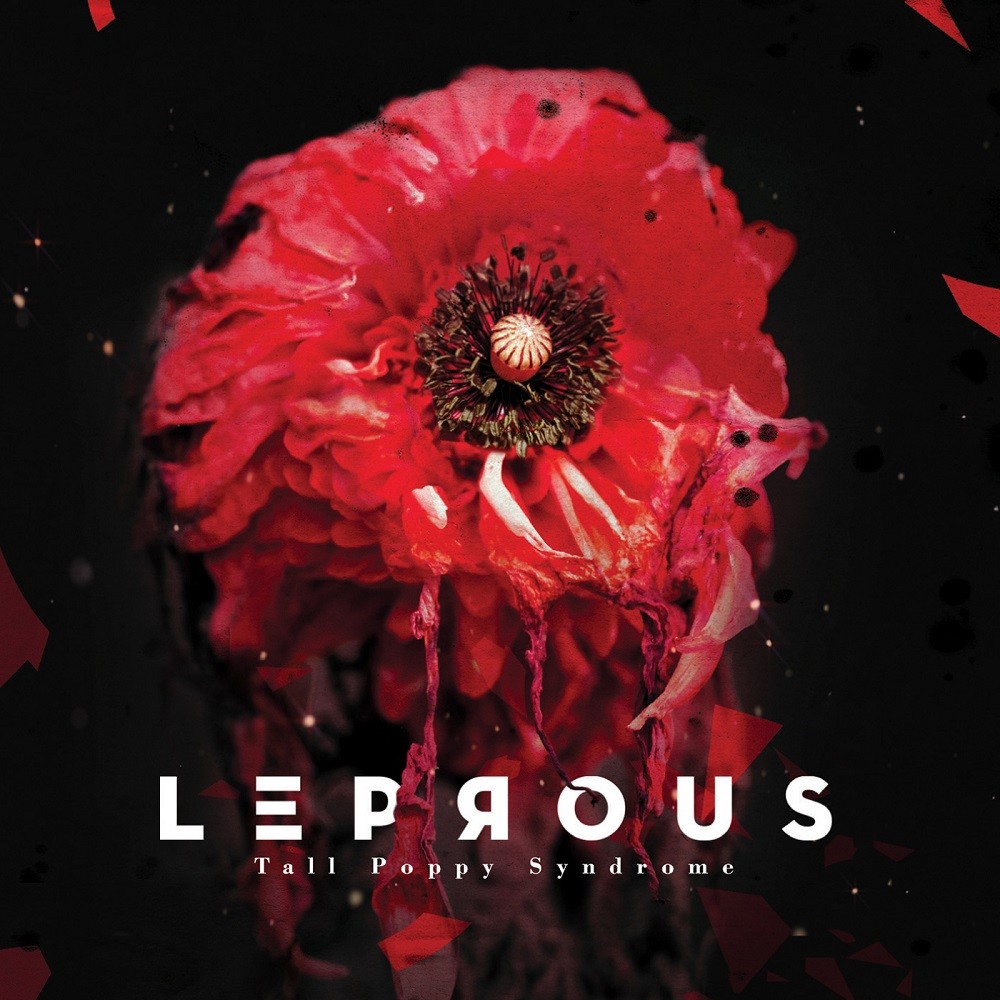 I've been familiar with Leprous for a long time now. I caught on to this band after their very successful 2013 album Coal and got to see this band meteoric rise to fame from the ground up with 2015's The Congregation. That being said, while I really did enjoy those albums, I only recently went back to listen to Leprous' older discography and, most notably, Tall Poppy Syndrome. Unfortunately for what was a relatively new progressive metal band at the time, Leprous never caught my attention in the same year veterans like BTBAM released The Great Misdirect, Amorphis' Skyforger, and Mastodon's bid for progressive album of the decade, Crack the Skye.

The first thing that I noticed was how much heavier this album is than the groups later efforts. The songwriting is much more sporadic and technical and it also features many more crunchy rhythm guitars. But it all sounds so smooth. While some of the transitions between different phrases can have a heavy whiplash factor, I am super impressed by how Leprous pulls these phrases/themes together and makes fully explored songs instead of a random grab bag of pieces thrown together. Each section is incorporated more than once in each song and in some cases, in polyphony. "He Will Kill Again" has an excellent build while still maintaining a fairly straightforward form, while songs like "Phantom Pain" and "Not Even A Name" sound humongous thanks to some killer bass grooves. And the closer "White" does not overstay its welcome despite an eleven-and-a-half minute performance.

But Leprous has always stood out for me because of the vocals from Einar Solberg. The natural charisma that is used as he alternates between stupendous melodic singing and the harsh screams is commendable. There are countless metal bands who wish they had a vocalist that could pull off both as wonderful as this! Speaking of those harsh vocals, this is something that has become far less prominent on subsequent records. So hearing them as frequently as they are on Tall Poppy Syndrome took a little bit of adjusting to get used to. But over multiple listens, I think I like them even more!

The two biggest faults this album has going for it are the length and some of the synth choices. The former is pretty obvious; songs like "Dare You" sound really good and have some fantastic hooks/grooves, but some of the middle sections feel like they meander and could have been cut, and the outro of "Not Even A Name" is played out as well. As for the synths, they sound incredibly late 2000s; most notably on the bridge of "Phantom Pain". I didn't like it when bands like TDWP and other adjacent Warped Tour metalcore bands used it and I'm not going to let it slide here!

Overall, I did enjoy going back to this older, heavier version of Leprous, it still maintains many of the integral songwriting techniques that are present on later records, but pulls them off with more gravitas, and the great production to back it up. I'm not sure it will ever eclipse Coal in my mind, but it does make quite the intriguing case.

I was a little late to discover the wonders of Norwegian progressive metal high-achievers Leprous to be honest. When I returned to metal in 2009 I was simply too focused on making up for lost time in the extreme metal space & it seems that “Tall Poppy Syndrome” may have floated by right in front of my face without me ever bothering to look up. It wasn’t until 2013 that their “Coal” album saw me getting onboard the Leprous train & the experience impressed me enough to entice me into checking them out on their first Australian tour three years later when they co-headlined with Perth’s Voyager at the Factory Theatre here in Sydney. Leprous were really solid in a live environment too but didn’t play anything further back than 2011’s “Bilateral” & that may well have contributed to me never having felt the urge to venture any further back into their back-catalogue which, as it tuns out, is a real shame given the results of the last couple of day’s listening sessions.

“Tall Poppy Syndrome” certainly gave me a solid nudge but I wouldn’t say that it knocked me off my feet on first impression. I was undoubtedly struck by the overall class of this record however I didn’t find myself reaching for elite level comparisons until subsequent listens & I think that has a bit to do with the fact that it relies so heavily on a few highlight pieces. The 63-minute, eight-song tracklisting is extremely consistent with the shortest & most laidback inclusion “Fate” representing the least impressive of the eight tracks but still being quite enjoyable. It’s interesting that Leprous have opted to hold back on drawing from their best material until a good fifteen minutes into the album though & I think that’s one of the reasons that it took me a couple of listens to see my feelings reaching their fullest realisation as I found that my initial impressions were already set by the time I got to those tracks the first time around & I needed time to let it all settle in my brain before being open to the finer nuances that became more evident with a great level of exposure. The first two tracks are both highly professional & are really very strong in their own right however they simply don't prepare me for the wonderfully constructed & more obviously hook-laden pieces from a little later in the tracklisting with “Dare You”, the title track or “Not Even A Name” all being superb pieces of progressive metal that saw my score rising into the stratosphere.

You won’t see the wheel being reinvented here by any means & the tendency for people to want to toss around terms like “avant-garde” are completely misguided, as are the references to progressive rock as there’s not a single track here that branches outside of the metal spectrum. “Tall Poppy Syndrome” is simply a very high-quality progressive metal record that presents its influences fairly openly for all to see but manages to match its more widely celebrated peers pretty comfortably in the process. It’s not hard to identify the sort of Dream Theater-isms that have been essential ingredients in virtually every clean-sung progressive metal release since the early 90’s but there are also moments when Leprous flirt with the more extreme territories that the band’s Norwegian homeland has built its reputation on. Opeth is clearly the biggest influence on “Tall Poppy Syndrome” though & it’s the moments where they drift closest to their Swedish idols’ sound that I get the most excited about to be honest. The title track is a great example & I often caught myself wondering whether a good half of its huge appeal is due to a sense of comfort built on familiarity or nostalgia.

I’m not sure that Einar Solberg’s vocal hooks are as consistently potent as they would become in later years (particularly on their classic “Live At Rockefeller Music Hall” double album which is my all-time favourite progressive metal release these days) & this would see me holding back from fully engaged worship for a period. However once Solberg starts to nail those melodies I find myself getting dragged in pretty quickly & it was really hard not to let those few genuine highlight tracks guide my rating to be honest, particularly given that the rest of the material is so blemish-free & invariably displays an undeniable class in its execution. Eventually I just gave in as it was clear that my subconscious had strong enough feelings to warrant it. Above all else, it’s important to note that Leprous never forget about the importance of song-writing & composition within a progressive structure. In fact, they get the balance of technique & accessibility just right on this occasion & in doing so create a stunning piece of art that will stay with me for some time yet.

For fans of Opeth, Haken & Ihsahn.

I had no idea what the phrase "Tall Poppy Syndrome" means until some recent research. Apparently it's a social phenomenon where people are criticized because of their genuine talents elevating them above and from their peers. That's what Leprous was doing with this album but guess what? Very few progressive peers despise that and they succeeded in the elevation! Resembling a combo of influences such as Opeth, Winds, and Porcupine Tree, the appeal of Leprous is undeniable. You can never place the band in a specific genre other than progressive metal.

The band's progressive metal material is a well-crafted mix of odd structures, clean vocals, time changes, complex rhythms, and contrasting heaviness, all in dexterous writing. The band's most appealing moments are the heavier ones, but those are only employed sparingly while helped out by the cleaner sections. Sure it would be awesome if the music was more crushing, but that would make the material less memorable and likely to suffer the negative effects of Tall Poppy Syndrome.

The opening song "Passing" is a great introduction to the album and the official part of the band's discography, having quieter verses in gloomy atmosphere combined with crushing sections of melancholy. It might deceive some listeners who would end up thinking this album is doomy when the rest isn't. "Phantom Pain" starts with quieter acoustics before an abrupt piano switch into heavier riffs, hammering bass, and later some jazz instrumentation. I dare you to listen to "Dare You" and NOT find how hauntingly effective the piano is in that song. Well, it is! Dueling with the guitar in mesmerizing ambiance.

"Fate" also starts quiet, but it is more of a short progressive power ballad with robust atmosphere and a build up into a slow but heavy teary solo. "He Will Kill Again" is a killer song that would've fit pretty well in the Aeolia sessions. "Not Even a Name" really flows between early Dimmu Borgir-style melodic black metal (frantic screaming vocals and speedy tremolo) and melancholic jazzy progressive rock/metal. With that ebb and flow of those two styles, it sure gives Leprous the originality it has.

Leprous' Crusade (yes, I'll keep using that Trivium Crusade reference) is the title track. It has a locked and loaded atmosphere with avant-garde progression of good twisted riffs from guitars, floating bass, and a small section of spoken vocals. After all that happens for 6 minutes, the last two minutes shows the track getting a little repetitive, but it doesn't break the greatness of this album. Repetition is something not to overuse when writing a progressive metal instrumental like that. However, what really tops it all off is the epic closer and my favorite in the album, "White", the longest Leprous song at 11 and a half minutes. Almost 10 minutes of glorious progressive metal, ending with a couple key transposes and unleashing all of the band's power before collapsing into a couple minute piano outro. Incredible!

It's pretty clear that I'm one of the very few people who enjoy Tall Poppy Syndrome more than many other progressive metal albums. This is quite a polarizing album but it immediately shows me the best forms of art. If you want to be more open-minded and look for something unique and less mundane, this is the album for you!