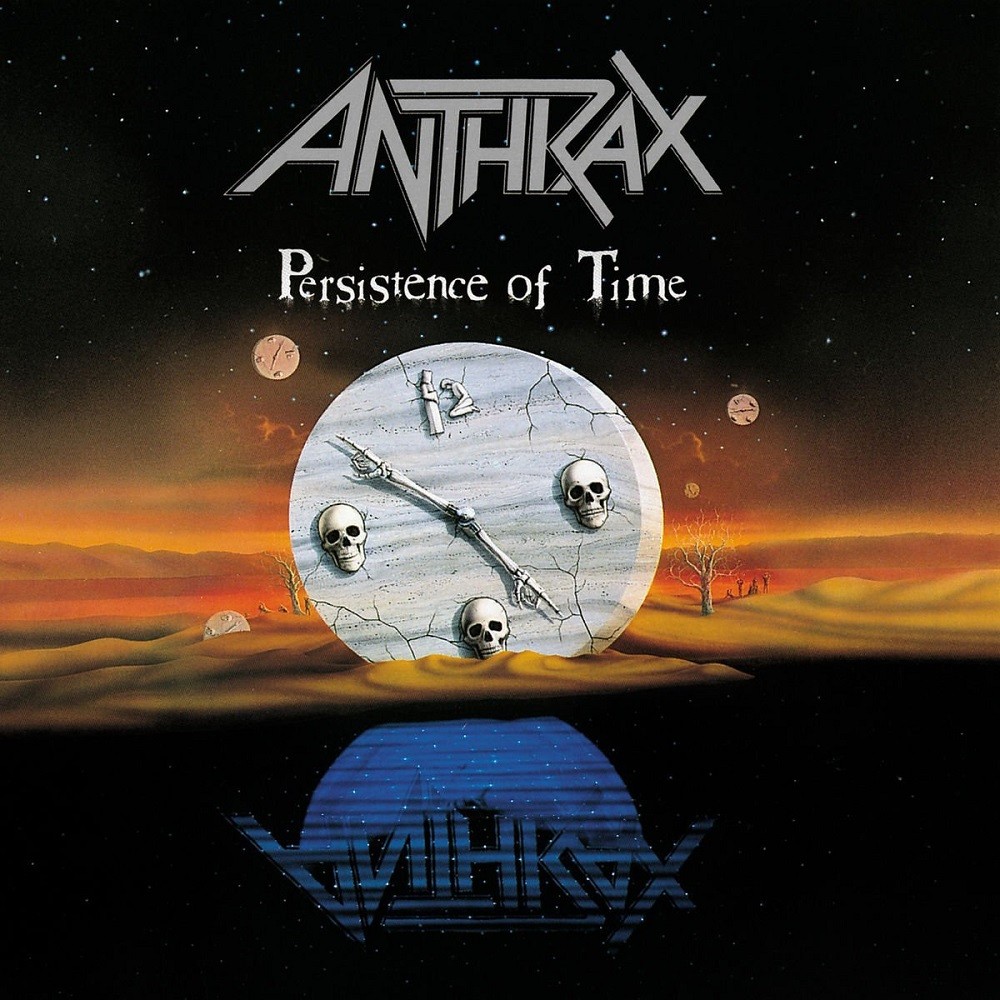 I've recently been extensively revisiting Anthrax's earlier stuff and whilst Spreading The Disease and Among The Living still retain their classic status for me, I have had a huge about-face with the subsequent two albums, State of Euphoria and Persistence of Time. I was originally much better disposed towards State of Euphoria with it's catchier choruses and less so to PoT's denser material. However, I feel time hasn't been too kind to SoE, whereas Persistence of Time has aged much better. Neither are as good as the previous two albums and I feel the main reason for this is the fact that there are less by way of backing vocals (particularly Scott Ian) that helped to beef up Joey Belladonna's performances on those earlier releases. Joey is a perfectly fine singer, but lacks the  vocal presence to carry off such aggressive thrash in isolation, sounding a little weak as a result.

SoE comes across as a bit throwaway now and, to be honest, in places a little silly, fuelled I'm sure by the "success" of I'm the Man. PoT, however, whilst not having as many great songs as Among the Living is much more akin to the 1987 classic and songs like Blood and Gridlock wouldn't feel out of place next to tracks like A Skeleton in the Closet and Imitation of Life. There is some filler and I think it peaks with Gridlock - Intro to Reality, H8 Red and One Man Stands failing to match the preceding highs and sounding a bit vanilla. It does go out strong with Discharge, but overall the latter half is ordinary.

It is a more mature-sounding album than State of Euphoria, but just doesn't have enough killer tracks to justify higher ratings. Would have been much better if they had trimmed the length to about 40 minutes and lost some of that Side B filler.

Anthrax had some great albums in the 80s with Among the Living and Spreading the Disease of particular note. But then they released State of Euphoria, which was a disappointment to many. To follow that album up, the band needed to try to write a more consistent release, and possibly let go of some of the silliness that had started to creep into their style. Persistence of Time is the album they needed to make and it's a thoroughly enjoyable album throughout.

Tracks such as Time, Blood, Keep it in the Family, Gridlock, Intro to Reality, Belly of the Beast and Discharge are all good, solid Anthrax tracks. The main problem here is that there are simply no 5-star tracks. No tracks that stand out as classics. So, while the album is consistently entertaining and has no real failures, it just doesn't force me to come back and listen to it again. Still, it's another 4-star album from Anthrax that could have been higher with a little more spunk.

I have never really got on all that well with any Anthrax release.  Whether it is the debut, the much lauded Among The Living or their live output, I just find everything to be lacking somewhat overall.  Their best release has to be Spreading the Disease but even then the world doesn't get bathed in flames for me.  I think that fundamentally I have never enjoyed any of the vocalists over the years.  Whether it has been Turbin, Bush or Belladonna things have always felt underwhelming and decidedly weak on the vocal front.  Whether it has been to please a younger audience (or maybe just a more accessible one) I have found the output in recent years to be weak overall and lacking in any real power.

1990's Persistence of Time was by all accounts disappointing.  Two singles released from the album had been given mixed response.  The cover of Joe Jackson's Got The Time being less well received than the more anthemic In My World and this is probably the story of the album overall, a mish-mash of some good ideas and some real filler thrown in to permeate the cracks.

The album does take a while to get going, the first three tracks - despite being memorable enough - just don't really make me feel like this is a positive start to an album.  Time feels clunky and cumbersome in both structure and delivery, Blood comes off as quite immature from a songwriting perspective and likewise Keep It In The Family lacks any real bite despite seemingly try to say a lot.

It is the aforementioned single, In My World that kicks things off proper for me.  It feels authentic and angry like a thrash metal album should do.  Seething with despair and crippled by hatred for mankind it is one of the few real gems of the many songs that Anthrax have written.  Unfortunately, the next few tracks just pass me by and without the record playing I could not recall any context of how they sounded at all.  Only Belly of the Beast provides some glimmer of well constructed thrash metal but it is not until the penultimate track One Man Stands that things get back on course, albeit fleeting before the horror of Discharge closing the album.

I hadn't quite realised just how much I disliked this record until I sat down to write this review, I even neglected to notice I owed a copy on CD which I have no recollection of picking up.  Sorry Anthrax fans, after 30 years of listening to metal I doubt much is going to change in the way of my low opinion of Anthrax.