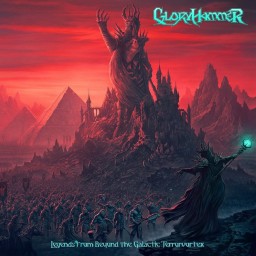 Cinematic, satirical and well packaged, the third concept album from modern power metal stalwarts Gloryhammer continues their science fiction/fantasy epic and shows the band has grown into themselves with this album. Now, Gloryhammer are not a serious band at all. With talented musicianship, and imaginative storytelling capabilities, they aren’t writing music to change the metal landscape. Right out of the gate the band opens up the album with a quick one minute thirty second orchestral intro that could have been ripped from any major 80’s Sci-fi flick mixed with some cheesy narration. Following this is a set of nine tracks filled to the brim with wild guitar solos, fast synth runs, orchestral surges and wild drum fills. It’s the absolute musical parody of any power metal band even attempting to take themselves seriously these days. As previously said the talent of the musicians in this band certainly carry the most appealing aspect of this release. Songs like Masters of the Galaxy and Power of the Laser Dragon Fire show off excellent instrumentation on top of solid vocals from lead singer Thomas Winkler.

The story of this third act in their Angus McFife saga, focuses on the titular character going back in time through a portal opened up at the end of their last record. Though the past the hero is thrown back into is not the one he remembers. It is instead been remade in the image of the main antagonist Zargothrax. Thus Angus must go on a quest to try and cleanse his home of Dundee of the evil space wizard. It’s beyond silly, and the lyrics tell the story in a very up front fashion along with some really cheesy narration by the hero and the villain. So if you don’t care for the aesthetic, or the story at all, you probably won’t enjoy the record. But if you can get past the beyond cheesy lyrics, ridiculous storytelling and embrace the epic instrumentation, this release will be up your alley. Any fan of power metal should enjoy this at least a little bit, and if you are really into the world building these guys have put together you will find lots of cool call backs and advances in the storyline (including a neat musical equivalent to after credit scenes seen in blockbuster franchise films.) It helps that the band doesn’t pretend to be anything other than they are. They completely embrace their image and it makes the album a fun listen.

With that said, there are still quite a few gripes I have with the record. The main song writing structure of most tracks includes a big key change in the last chorus. This was prevalent in the previous record as well and can get tiresome. Also certain lyrical passages sound pretty clunky and go beyond the general cheesy lines of the majority of the record. One line that comes to mind, “My steel will blow you away, fighting mega battles every day.” from the song Gloryhammer tends to make me scratch my head on every listen. But for every moment like that there are epic flourishes in tracks like The Fires of Ancient Cosmic Destiny with its long form narration and multiple phases within the song. It shows off some progressive tendencies within the band’s songwriting capabilities.

With an understanding that my final score might seem a bit harsh for how much praise I gave, this album is a truly solid effort from one of power metal’s most popular bands. 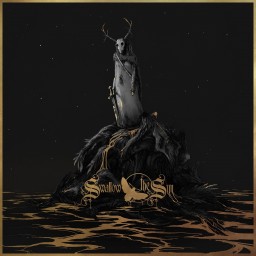 Swallow the Sun are a band with a pedigree of grandiosity, melodrama, and atmosphere. This album lacks none of these, yet still finds ways to pale in comparison to earlier releases like Songs From the North, or the debut The Morning Never Came. It felt like the band was treading water for this record musically speaking. The melodies on this record are certainly there. They show up especially in the vocals on tracks like The Crimson Crown and Upon the Water, where lead vocalists Jaani Peuhu and Mikko Kotamäki interweave and harmonize well. Both are pleasant tracks and connected with me strongly at times. Another track, Firelights, has a similar vibe in its slowed tempo, melodic guitar passages and dramatic/introspective lyricism.

The production and atmospheric touches on the record also work for the most part. I never noticed any glaring detracting parts of the production. I would say that a main issue for me through multiple listens would be the lack of standout moments. The only exception to this would be the opening moments to the final track Never Left, the guitar build up felt pretty satisfying to hear, but it unfortunately failed to continue the momentum into the main body of the track. Besides that, each track flows into each other with similar structures and melodies, and the end product as a whole suffers for it. If you’ve heard the first track, you’ve kind of heard them all. The harsh vocals are hardly memorable, only showing up for a few lines throughout tracks, or as backing vocals. The context of the record, however, does put a lot of emotional weight behind the tracks and it’s lyrical content. Lead male vocalist Jaani Peuhu had lost his partner prior to the recording of the record which puts into perspective the heaviness of the lyrics and their delivery. It mixes a sense of mourning, despair, with a slight feeling of hope. It's an album about processing grief, perhaps taking one’s “Shadow” and “forcing it into the light” Is a metaphor for working through those difficult and harsh moments in our lives. I felt that lyrically as a whole the album spoke to me in that regard.

Previous Swallow the Sun records were not immune to the monotony issue that this record faces. Their previous record “Song From the North” was a triple album that was able to hide some of its flaws behind that fact, but had multiple tracks running into each other and blending together. Take away the novelty of the three disc project and you get “When a Shadow is Forced into the Light.” A powerful message about how one deals with and works through loss, grief, and emptiness, sandwiched between lackluster songwriting and song structure. It’s overall, not a bad album, in fact it will draw a lot of listeners in with the pleasant melodies, and easy to connect with concept. I just struggle with the record’s lack of memorable moments and feeling of “I’ve been here before.” 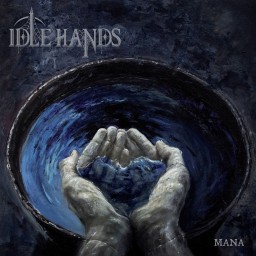 Portland, Oregon based gothic rock band Idle Hands released their debut record, Mana, for all to hear this past May. After multiple listens, one might realize that everything about this band just fits right into the niche they attempt to occupy. Gothic aesthetics mixed with post punk vocals and heavy metal guitar work, combine to create one of 2019’s most accessible records in the heavy rock genre. Idle Hands are taking a romanticized 80s new wave blueprint and writing heavy metal and gothic rock around it. The most obvious example of this would be the song Jackie. A hyper melodic and swiftly played track focusing on the relationship between the narrator and the titular character. Another track towards the end of the album (A Single Solemn Rose) also fits and emphasizes this model perfectly. The vocals of lead singer Gabriel Franco immediately evoke thoughts of The Cure and Joy Division, while the guitar playing sounds like a watered down Iron Maiden. Half the time I felt this combination worked well and created many memorable moments. Tracks like Nightfall, Blade and the Will, and Give Me to the Night play into the youthfulness of the record very well with crystal clear vocal melodies on top of great aggressive guitar riffs and dual guitar licks. The other half of the tracks just failed to show off anything better. Not that any song on here is downright bad, but others are just so obviously better than others that it creates a bit of unevenness to the end product.

Lyrically is where the album suffers. They are not delivered smoothly on tracks like Cosmic Overdrive, and are fairly simple, some could even be considered downright head-scratching. The track Dragon, Why do you Cry? comes to mind. The gloomy and overt melodramatic nature of the track combined with the intermittent narration had taken me out of the experience and left me wondering what drove the writing of the track. Yet still even with these moments, I still find myself having a good time with the record. The saccharine melodies are beyond catchy, and the speed of the guitars tend to get a head bob out of me frequently. Production wise the album is incredibly clean and easy to digest, yet still able to effectively emphasize the atmosphere and imagery of the heavy metal genre. Structurally the album consists of eleven 3 to 4 minute long tracks with simple verse/chorus/verse structures. The instant gratification and easy digestible nature of the album is definitely an advantage. It will assist in allowing it to stand out among a sea of much less melodic affairs in the other major genres of metal.

At the end of the day, not many bands with this kind of sound have broken out and managed to capture an audience as large as they have. While the lacking lyrics and the uneven quality of each track are keeping it from standing out as a great record. Its a solid album that executes its goals very efficiently with some standout results.