Gloryhammer - Legends From Beyond the Galactic Terrorvortex (2019)Release ID: 9761 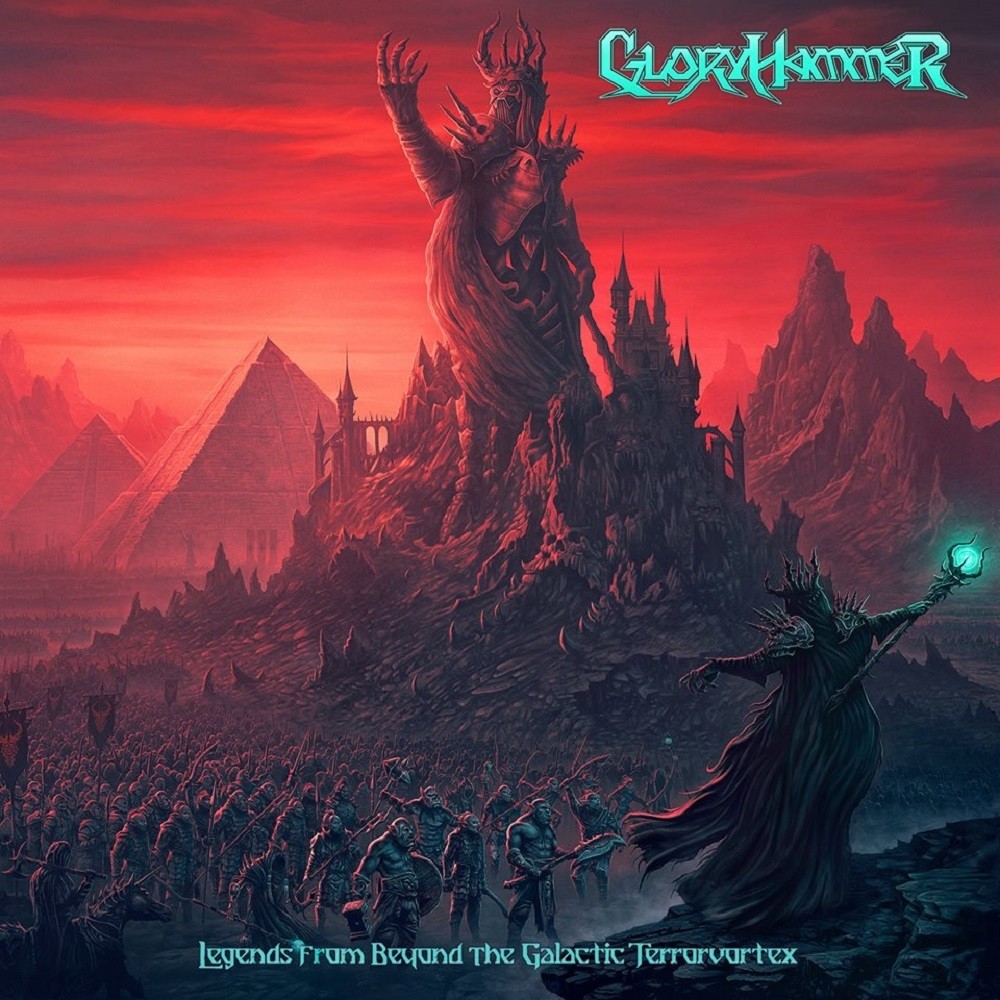 Cinematic, satirical and well packaged, the third concept album from modern power metal stalwarts Gloryhammer continues their science fiction/fantasy epic and shows the band has grown into themselves with this album. Now, Gloryhammer are not a serious band at all. With talented musicianship, and imaginative storytelling capabilities, they aren’t writing music to change the metal landscape. Right out of the gate the band opens up the album with a quick one minute thirty second orchestral intro that could have been ripped from any major 80’s Sci-fi flick mixed with some cheesy narration. Following this is a set of nine tracks filled to the brim with wild guitar solos, fast synth runs, orchestral surges and wild drum fills. It’s the absolute musical parody of any power metal band even attempting to take themselves seriously these days. As previously said the talent of the musicians in this band certainly carry the most appealing aspect of this release. Songs like Masters of the Galaxy and Power of the Laser Dragon Fire show off excellent instrumentation on top of solid vocals from lead singer Thomas Winkler.

The story of this third act in their Angus McFife saga, focuses on the titular character going back in time through a portal opened up at the end of their last record. Though the past the hero is thrown back into is not the one he remembers. It is instead been remade in the image of the main antagonist Zargothrax. Thus Angus must go on a quest to try and cleanse his home of Dundee of the evil space wizard. It’s beyond silly, and the lyrics tell the story in a very up front fashion along with some really cheesy narration by the hero and the villain. So if you don’t care for the aesthetic, or the story at all, you probably won’t enjoy the record. But if you can get past the beyond cheesy lyrics, ridiculous storytelling and embrace the epic instrumentation, this release will be up your alley. Any fan of power metal should enjoy this at least a little bit, and if you are really into the world building these guys have put together you will find lots of cool call backs and advances in the storyline (including a neat musical equivalent to after credit scenes seen in blockbuster franchise films.) It helps that the band doesn’t pretend to be anything other than they are. They completely embrace their image and it makes the album a fun listen.

With that said, there are still quite a few gripes I have with the record. The main song writing structure of most tracks includes a big key change in the last chorus. This was prevalent in the previous record as well and can get tiresome. Also certain lyrical passages sound pretty clunky and go beyond the general cheesy lines of the majority of the record. One line that comes to mind, “My steel will blow you away, fighting mega battles every day.” from the song Gloryhammer tends to make me scratch my head on every listen. But for every moment like that there are epic flourishes in tracks like The Fires of Ancient Cosmic Destiny with its long form narration and multiple phases within the song. It shows off some progressive tendencies within the band’s songwriting capabilities.

With an understanding that my final score might seem a bit harsh for how much praise I gave, this album is a truly solid effort from one of power metal’s most popular bands.

I've always thought that Power Metal is one of the most important genres in metal. Amidst the brutal, death laden, austere compositions of various genres of metal, Power Metal showcases the simpler things in life: pirates drinking rum, countless references to Lord of the Rings and other fantasy landmarks, and, in Gloryhammer's case, over the top science fiction. I'm of the belief that metal as a whole takes itself a little too seriously sometimes, so albums like Legends From Beyond the Galactic Terrorvortex help to balance out that seriousness with their tales of inter-dimensional travel, galactic conquest, and jet-packs made of "cosmic steel". Power Metal can a silly, over the top, cheesy as hell genre for sure, but learning to wield that cheese like an all-powerful enchanted hammer can lead to something that's extremely enjoyable and entertaining.

The music itself is standard power metal fare with extra steps taken to ensure a lofty, more cheese filled experience, but Gloryhammer hits all the clichés boldly and with confidence. The tempos are high, the drums are driving, the guitar lines are assuredly similar to every other power metal album you've heard, and the orchestra and synths add that comical final layer to the epic space fantasy. Gloryhammer's vocalist does a great job with what he's given, and manages to make even the silliest of lines sound sincere. That being said, the names they've decided to go with are still hilarious, with Angus McFife being part of the Hootsforce (Hail Hoots) fighting the evil Zargothrax. Whether that adds or takes away from the album is up to you, but Gloryhammer pulls it off better than other similar bands.

As silly as it is, what makes Legends From Beyond the Galactic Terrorvortex stand out is the story. In my experience, a lot of these sort of albums like to pretend their telling a story but most of the album is nonsensical and not cohesive in the slightest. Gloryhammer does a fantastic job of actually telling a story that has a beginning, middle, and end, and follows normal storytelling metrics. Amazing what happens when you put a little bit of effort into world-building and have your songs outline events in chronological order. The story is also easily understood with the very first listen, which is another huge plus. Legends From Beyond the Galactic Terrorvortex isn't a marvel of storytelling and most of these ideas have been done before, I still have to give it credit for successfully building a compelling world with somewhat compelling plot elements. Listening to this has really made me want to go and listen to their first two albums to get the full story.

This is just an incredibly fun album through and through. If you can get past the cheese and nerdiness, there's great Power Metal songwriting and performances on pretty much every track. Although I have nothing but praise for this album, it's still another formulaic Power Metal album that is a little too silly for its own good. So, as a critic, I have to give it a lower score than what it's probably worth. As a metal music listener, though, I'm going to be recommending this for quite a while.