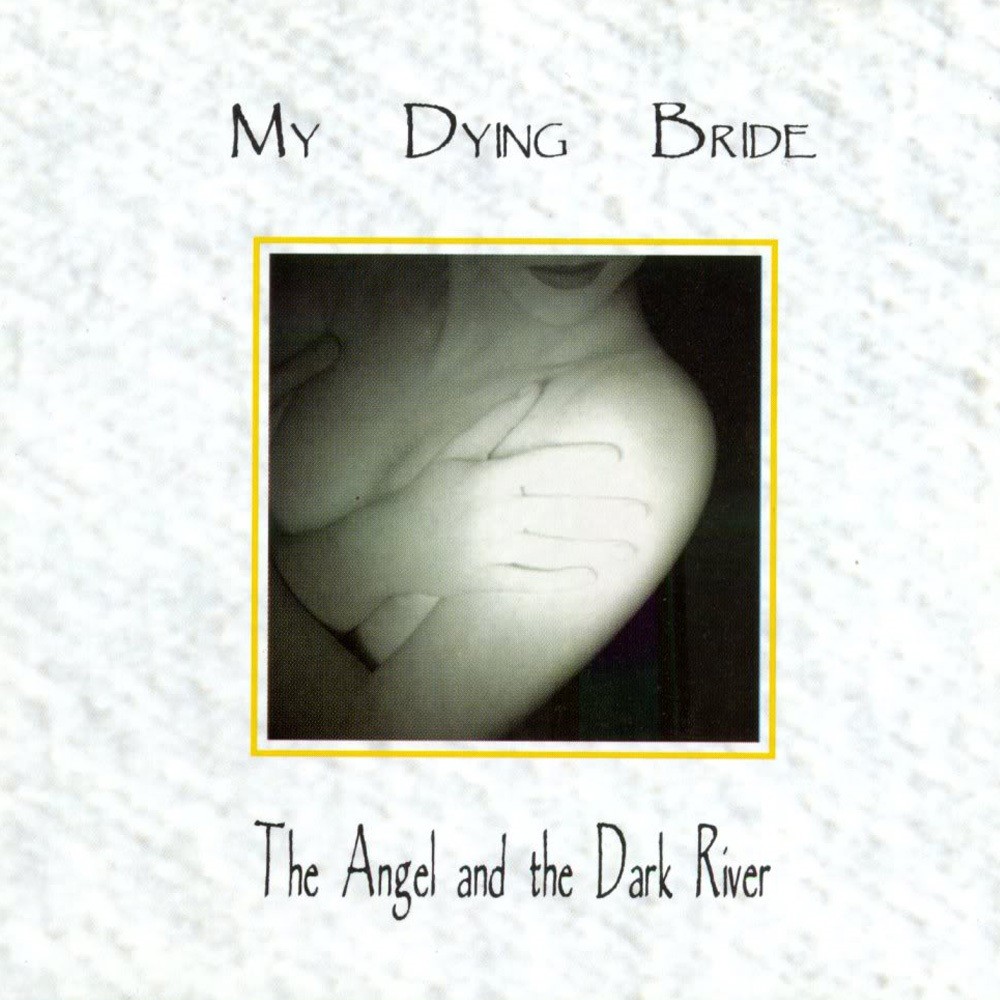 A beautiful album that brought My Dying Bride to a wider audience without shedding their identity.

You can always tell that a band is making a transition towards a new style when they change their logo. The fact that The Angel and the Dark River contained an at least half naked woman on the cover wasn’t particularly surprising. After all, both As the Flower Withers and The Thrash of Naked Limbs contained nudity in some form on their front display. What was particularly noticeable when viewing this release for the first time, was that the eerie, death metal themed logo that had adorned previous My Dying Bride albums had been replaced with a far more conventional font. This alteration alone suggested that The Angel and the Dark River might find the band attempting to reach a broader audience, and what better way to do that than to shed their ties to death metal. This was a very scary idea for me personally, as the band’s previous full length Turn Loose the Swans was (and still is) one of my absolute favourite albums of all time. I didn’t want them to change. I wanted more of the incredibly atmospheric death doom that was built around haunting riffs, crushing drums and violin romanticisms. Disappointment seemed to be the only result possible if the band had indeed taken this route. It took approximately 90 seconds of opening track The Cry of Mankind to know that I was about to be convinced otherwise.

I should have known better too, as both the opening and closing tracks off Turn Loose the Swans (Sear Me MCMXCIII and Black God) were amazing despite not containing guitars or drums in the slightest. These Brits seem capable of creating melancholic magic at will and they’ve done so consistently throughout their existence while still attempting to expand and evolve their sound. This is the album where they were confident enough to base their song structures around Martin Powell’s keyboard and violins rather than using him as simply a finisher. The Cry of Mankind is such a stunning track that starts off with the simplest of melodies before building up to a gorgeous orchestra of doom riffs, cascading drums, deep crooning vocals and exquisite piano. Not satisfied with the obvious genius of all the above, the track eventually breaks back down to only the original melody (the one you’d probably hadn’t noticed was continuing through the whole track), before fading out into ambient bliss complete with distant horns. It’s My Dying Bride at their best and it’s hard to imagine how the rest of the album could possibly be this impressive. As it turned out I’m not sure that it ever reaches these heights again (at least not the official release but more on that later), but it’s still nothing short of excellent.

From Darkest Skies is where fans first experienced Aaron at his most weepy and sorrowful. After years of listening to his aggressive death growls and deep clean vocals, this theatrical attempt at melancholy certainly took some getting used to. Fortunately for Aaron, the music is so deeply despondent and doom filled that his naked attempts at vulnerability work perfectly well in this environment. I should point out that he’s by no means limited to one style, varying his vocals throughout the album to fit the mood. I think his performances on later albums would sound a bit less awkward, but he’s nothing short of captivating throughout The Angel and the Dark River. After having such a powerful influence on the opening track, the piano doesn’t resurface for the rest of the album, with Martin utilising the violin instead. Every track has beautiful moments of exquisite melancholy and while Your Shameful Heaven’s guitar driven finale could be considered upbeat, this is one of the more depressive albums you’ll come across. Two Winters is another highlight with a really tender acoustic foundation combined with Aaron’s heartfelt vocals and Martin’s violin making for an almost overwhelmingly touching experience. Aaron has stated in interviews that this track is his favourite of all My Dying Bride’s work and it’s unquestionably one of the most moving.

There is one thing that makes rating The Angel and the Dark River a bit perplexing for me. Back in 1995 I purchased this album in the digipak form, which had The Sexuality of Bereavement as a bonus track. I think it would be at least ten years before I would be informed that this track was not actually part of the album the way it was originally intended. Yes, it did always seem a bit strange to me that there would be a huge death doom track complete with death growls to finish an album where the band had moved away from that sound, but the album sleeve made no mention of it being bonus material so I just took it as part of the package. The thing is...I think The Sexuality of Bereavement could very well be my favourite My Dying Bride track ever! It’s immensely emotionally moving and I don’t think the band integrated violins into their death doom any better than they did on this track. To me, The Sexuality of Bereavement will always be part of The Angel and the Dark River, and nowadays it’s a bonus track on every subsequent re-releases of the album. If I rate this album with its inclusion, I can’t give it anything but full marks. Without it...well, it just falls short due to my personal preference towards the band’s death doom material. It’s a beautiful album though that I listen to regularly and one that brought multitudes of new fans into contact with one of metal’s most esteemed bands.

Do any of you ever like to change the tempo of slow doom metal albums to 2x faster to get it to the speed you prefer? No? Just me? OK... Sure it might be what some of you consider "blasphemous to doom metal", but that's how I listen to some, just SOME super-slow doom metal albums. I think listening to them that way is a nice break from listening to them in the same tempo every other time. Of course, I'm gonna review them at its proper slow speed while making a few shout-outs to my faster mix.

Speeding things up or not, no gothic doom fan would ever put down an outstanding depressing heavy album like The Angel and the Dark River. My Dying Bride have made 6 of the best lengthy atmospheric doom songs to chill you to the bone!

The album starts with the MDB classic hit "The Cry Of Mankind", drifting through slow doom. The song is memorable through its actual 7 minutes, though those last 5 minutes weren't that necessary, repeating that d*mn guitar chord throughout with ambient noises of crickets, distant choirs, and unusual sounds. At least it doesn't badly affect the song nor the album. "From Darkest Skies" starts with bass and chilling violin, followed by deep emotional vocals. Then the song gets heavier with more violin.

Album favorite "Black Voyage" has everything! All the guitar, bass, vocals, drums and violin are so great, and a bit haunting. "A Sea to Suffer in" is a good composition that can cause anyone to shed tears even after claiming they don't cry.

"Two Winters Only" is an absolutely beautiful song with emotion poured out through fantastic music, though it would've been better not sounding too slow (hence my 2x faster mix). "Your Shameful Heaven" is an outstanding finale, starting with a sweet slow violin before exploding into a heavy mid-tempo riff while still having the depressing vocals. Great riffs, great drums, great speed, faster than the others! Perhaps I didn't have to speed up that song by 2x, but at least I turned it into killer gothic thrash metal.

And now to talk about the bonus track "The Sexuality of Bereavement"! It was originally recorded in the Turn Loose the Swans sessions as a sequel to "The Bitterness and the Bereavement" from their debut As the Flower Withers, but ended up getting left out and released as a single then as a Digipak edition bonus track for this album. The violin intro sound similar to that of the previous track "Your Shameful Heaven" which might make it sound like a continuation of that song, but then it leads slow heavy guitar and growls. That's right, the growling you would hear from Opeth at that time. It's a wonderful song of "desire and wine", and one of the band's best! Glad I finally got to listen.

All I can say is, The Angel and the Dark River is one of the best doom metal albums I've ever heard, regardless of speed. This album is best listened to during a depressing winter when you're staying home during a heavy snowstorm (or rainstorm depending on where you live). If this isn't an essential gothic doom album, I don't know what is!

Favorites: "The Cry of Mankind", "Black Voyage", "Your Shameful Heaven", "The Sexuality of Bereavement" (bonus track)