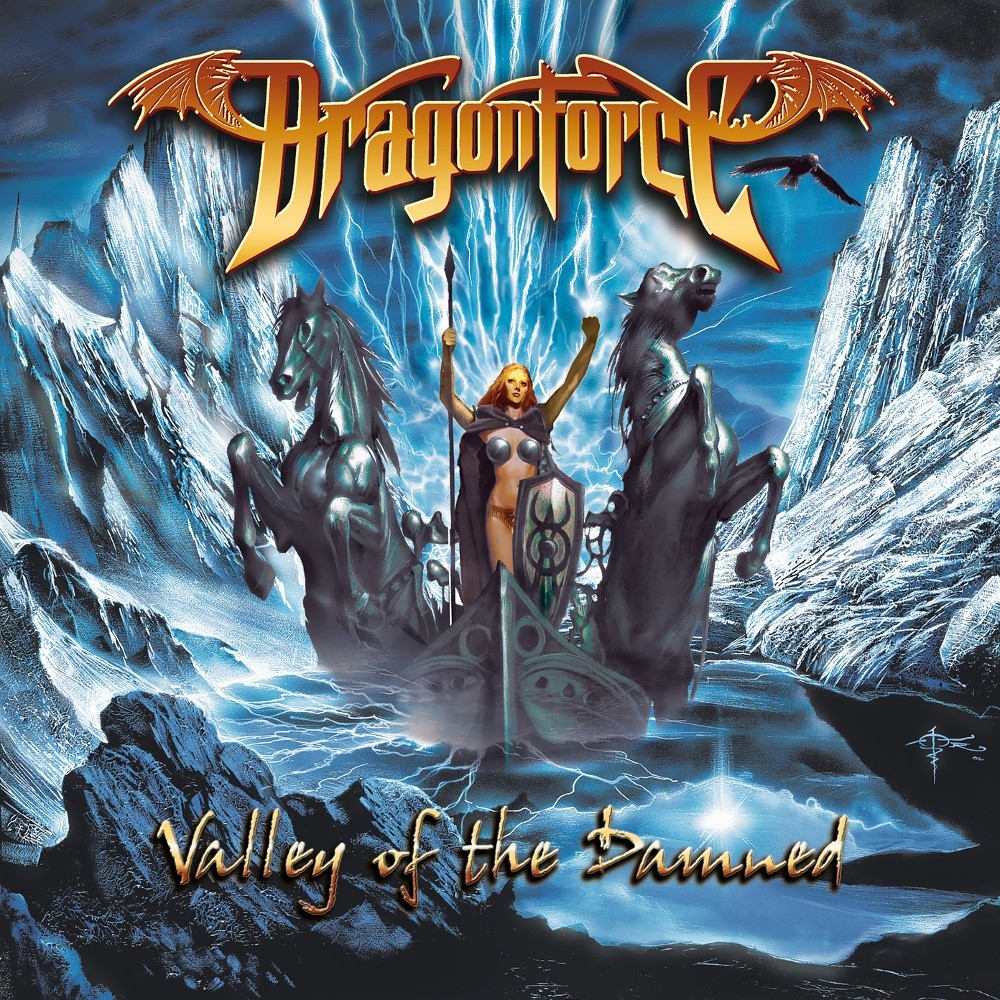 What better way to end the power metal part of my Metal Evolution Band Challenge with the one band that started my entire metal interest? That's right, it's DragonForce!! It would've been great to review their third album Inhuman Rampage which has the first ever metal song I loved, "Through the Fire and Flames", but then I decided to review this album. So let's play this album and get this review started!

Scr*w the haters who think DragonForce is fake because of a few poor live performances, this is real! There's absolute nothing wrong on this impressive album. Valley of the Damned is a true power metal classic, showing those guys' potential in creating satisfying works of extreme power metal. This is metalheads who love fast solos!

It starts with a quick windy intro, "Invocation of the Apocalyptic Evil". Then BOOM!! The power metal action kicks off in the title track! It has amazed me for like 7 or 8 years now. You already start to hear the amazing voice of ZP Theart in the first verse that rises from soft and deep to excited and high-pitched. The music speeds faster than Sonic in the exciting atmosphere. The real treat is in the middle of the song when you get the mesmerizing soloing from guitar wizards Herman Li and Sam Totman. They're the greatest guitar duo still intact in the present day, a greater blend of melody and speed than Slayer! After the final chorus, ZP does a majestic falsetto scream that starts a glorious melodic solo by Sam to conclude the song on an uplifting note. The next song "Black Fire" is another greatly fitting song where the amazing duo Herman and Sam shine with their guitar skills, alongside ZP's amazing vocals. And the chorus is so great! Also, part of the soloing is sampled from a Double Dragon theme. "Black Winter Night" continues the amazing guitars and vocals, though the leads sound a little weird in the verses but still OK.

Then we have the ballad "Starfire" (wow, they really named a couple songs after one of the Teen Titans, Starfire and her evil sister Blackfire). It opens with cool atmospheric piano with background rain. I don't usually love a lot of ballads, but I love this one! Next one is another great personal favorite of mine, "Disciples of Babylon". SO FREEZING AWESOME!!! It has the catchiest chorus I've ever heard in power metal! I love the "It's here, it's near" part of the chorus. The brilliant keyboards flow through the guitars and vocals in exciting mood. At the 4-minute mark, once everyone has calmed down from all that power metal adrenaline, there's an acoustic piano interlude that's good and a little jazzy. The soloing is still present, shredding lightning-fast through the otherwise calm interlude. Then the heaviness returns for the last chorus. "Revelations" is another epic song with a nice slower soloing part with a bit of ZP's harmonious vocals. The fast part of the soloing is awesome too.

Another cool track "Evening Star" starts as a slow beautiful ballad for the first 30 seconds, then speeds up to a great fast song. "Heart of a Dragon" is an amazing catchy uplifting song that serves as a happy ending...to the standard edition, this is. I'm sorry if any of you have the original standard edition of this album, because then you would be missing out on the bonus track, "Where Dragons Rule". It's a majestic song that would make any version of this album that has this song complete. It starts with in calm ambiance with cool piano before bursting into heaviness. This is so amazing that I don't why they would ever make it a bonus track. It's a brilliant album closer that would make you want more, and fortunately there is more to come in later albums. Dragons rule! Unicorns suck!!

Valley of the Damned is indeed one of the greatest produced albums in power metal history. The fantasy lyrics have great mood and every member of the band deserves credit. This really surpasses any Blind Guardian album I've listened to. All tracks are great! This is for all you power metal fans out there. May the DragonForce be with you!