Blind Guardian - Imaginations From the Other Side (1995)Release ID: 735 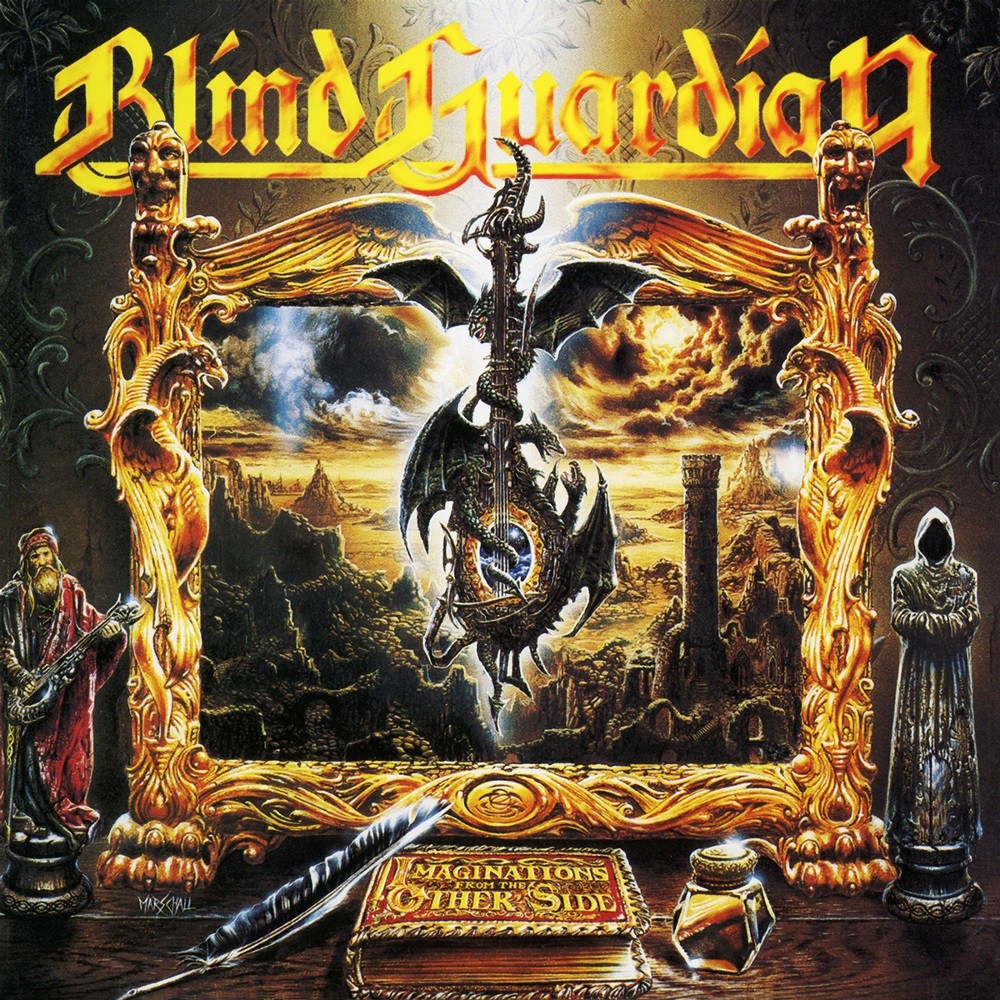 The Towers Of The Blind

The company walked along flaking and gilded, cold pillars as torches flickered against the deafening silence, casting familiar shadows reminiscent of the beginning of their journey. The empty halls were awe-inspiring, dignified, and soundlessly conveyed their grandness to the party. "You've become stronger, my prince," proclaimed a company member while catching his breath. "We all have, my friend, this journey has been a perilous one. One that still shapes our very beings," said the prince, slumping slowly down the pillar, armor and sword clanging on the cracked stone floor. "What a marvelous place," exclaimed the old bard, angling his lantern to the ceiling, casting beams of light that glinted and danced against the elegantly carved but worn designs. "Come and take a rest old man, we continue soon," sighed another company member. "Nay, we will rest for a while in these safe halls of the mountain. We've come too far to be hasty," argued the prince, the rest of his company complying."Imagine the wonders this hall contained in an age other than ours," said the bard, finally resting on another pillar across from the prince, who chuckled at his statement. "Imagination was always your forte, old friend. Even with our story far from over your head is still in the clouds," said the prince, catching a glimpse of the bard grinning, stroking his silver beard. "I hath seen many a sight, but no sight as efficaciously splendid as what lies within my own mind, my prince," stated the bard, slowly closing his eyes and resting his head. The prince slightly scoffed at the bard, but eventually followed suit and let his eyes close and his mind wander. The dark and frozen blackness of sleep was instantly set ablaze with a golden orange glow, rays of light dancing off all the polished gold one could imagine. Ornate rugs blanketed the stone floor and colorful tapestries hung from the shining pillars, depicting kings and dragons of olde. Throngs of dwarves packed the hall, guzzling ale and greeting their brethren. Slowly but surely the echoing performance of songs began to resonate across the halls, the melodies as grand as the halls themselves.

Imaginations From the Other Side is a tale of refinement, with Blind Guardian beginning the 1990's with the rough around the edges but filled with potential release of Tales From The Twilight World. The galloping riffs and furious drumming were still reminiscent of their Speed Metal beginnings two years prior, but a fuller and grander sound was beginning to take shape. That sound would be better realized in Somewhere Far Beyond, with vocalist Hansi Kürsch improving immensely to settle into his legendary Power Metal range. Certain portions of Somewhere Far Beyond had a full and epic sound, created by more mature songwriting and each band member executing their parts with powerful precision, however there was still some experimentation with their Speed and Thrash Metal roots plus some theatrical elements on tracks like "Black Chamber". Blind Guardian followed up this time of exploration with the best decision they could have made, which was not really experimenting at all.

It's apparent from the self-titled, opening track "Imaginations From The Other Side" that Blind Guardian finally embraced their fantastical tendencies and have fully crossed into the realm of boisterous and aggressive Power Metal. By not abandoning their complex songwriting and turning the epic knob up to 11, Blind Guardian roar to life with blistering guitar riffs, pounding drums, and a powerfully creative vocal performance from Kürsch. Imaginations From The Other Side sounds so much larger and full than its predecessors, with Kürsch's overlapping choir harmonies being even more pronounced and each drum beat being written to smartly accent important downbeats in the guitar riffs while not losing a bit of energy. The overall speed of the album took a dive when compared to Somewhere Far Beyond since there is less Speed Metal drumming influence, but even that ends up playing to the strengths of Blind Guardian's newly refined and larger sound. There's still plenty of ripping sections in tracks like "I'm Alive" and "Born in a Mourning Hall" to keep the album forceful and heavy, but they're more contained in-between slower and more epic choruses.

Imaginations From The Other Side balances the use of seemingly silly Power Metal effects extremely well, to keep each song sounding vigorous but never ludicrous, which is a feat in of itself considering the chorus section in "Bright Eyes" plus the overall cheesiness of "A Past and Future Secret" and "Mordred's Song". There's just enough acoustic and fantasy elements stuffed in between the guitar riffs and Kürsch's bellows to really sell the Power Metal theme without being overblown. The guitar solos and riffs as well as the drum fills and accents are top notch, with so many different variations in galloping Power/Speed Metal riffs that eventually transition seamlessly into slower and robust choruses. Blind Guardian always had a knack for keeping the listener on their toes, and songs like "Another Holy War" with its insane amount of guitar and vocal melodies show off that talent like no other. There's so many layers and hidden elements that make each song exciting to come back to time and time again just to find as many hidden gems as possible. It's incredible how much they were able to pack into an already complex and fast style of music without anything feeling out of place.

As said before, Imaginations From The Other Side is a masterclass in refinement of their style, with Blind Guardian sounding even more confident than they were on Somewhere Far Beyond. It helps that the lyricism is much tighter and more natural than their previous records, with Kürsch's vocals never sounding awkward or out of place, which was a slight problem in Somewhere Far Beyond and even more so in their older releases. The use of slower and more epic choruses also help Kürsch to seriously flex his vocal muscles throughout the entire album, with his performances on "Imaginations From The Other Side", "Another Holy War", and "And The Story Ends" being some of his best material ever. The vocals and guitar never vie for the spotlight either, with each being written to compliment each other at every turn. Kürsch even goes for a few more grisly notes that he never touched on Somewhere Far Beyond, showing that he really went all out to try and match the epic scale this album conveys. The harmonized choir is also used more often to create some necessary variety, even though I'm sure some Blind Guardian fans could listen to Kürsch screech his high notes out all day long.

While Somewhere Far Beyond was Blind Guardian's outset, Imaginations From The Other Side shows their maturity and consistency, even though they lost a bit of that bright eyed creativity along the way. This doesn't hinder the album from being an opulent pillar in Power Metal's history, but it remains true that most of the songs on here follow some repetitive songwriting choices. These choices make the album absolutely superb, but somewhat less memorable to me than Somewhere Far Beyond. Blind Guardian had found the golden center of their signature epic and full sound and didn't want to let go, and frankly I don't blame them, since Imaginations From The Other Side gave us nine of the most blistering, complex, but still fantastically grand Power Metal songs it could muster. It really goes to show how much heft and energy Power Metal can have with smart writing choices, without all the crazy additions now seen in modern Power Metal like a full orchestra or crazy synth effects. They're able to build and keep the energy up during the fast verses and bridges to finally release all the built up tension in a massive chorus in a way that few bands are able to do, and it shows on every single song. Blind Guardian's story doesn't end just yet, as the closing track exclaims, but for now I have no shame in basking in the gilded halls of dragons and kings for as long as I care to.

4.8
Band
Blind Guardian
Release
Imaginations From the Other Side
Year
1995
Format
Album