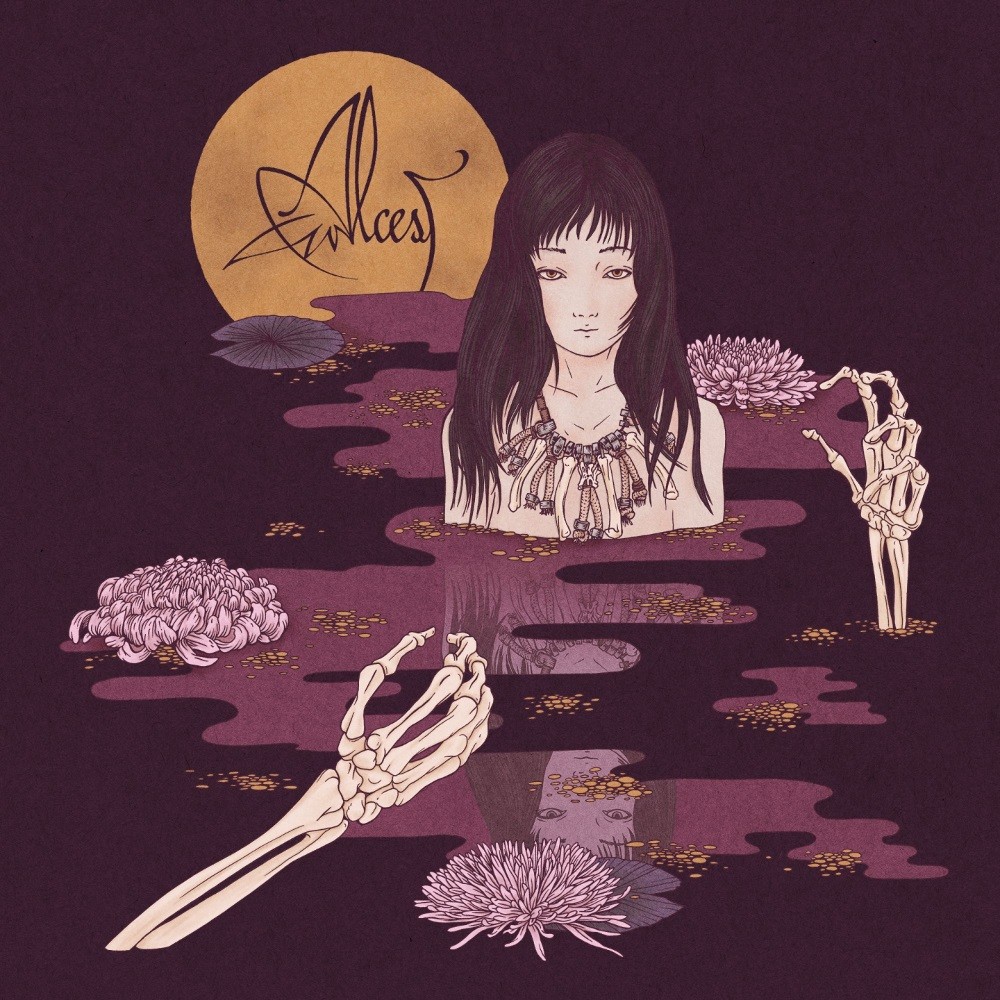 My foray into Alcest’s blend of dreamy but somewhat sinister influences from Shoegaze and Black Metal, hence Blackgaze, didn’t begin with their most acclaimed Écailles de lune nor with Souvenirs d’un autre monde, but with Kodama, an album that beautifully expands on their Shoegaze and Post-Rock tendencies. In fact, it was somewhat shocking to go back to Écailles de lune to find out how they solidified themselves as one of the first premier Blackgaze bands by having a more balanced mix of the extreme versus the relaxing. However, I’ve always been drawn back to Kodama more than the rest of Alcest’s discography despite it being a less daring or complex release. I’ve gone back and forth on how much I truly enjoy this album under a critical lens, feeling conflicted for quite some time about separating my ability to melt into my chair and just enjoy Kodama wholly as a break from all the death and destruction I tend to check out on a regular basis versus how good I think the album actually is. I’ve finally reached a resolution in that Kodama is an incredibly strong album for Alcest, but it doesn’t quite have the full album package I thought it once did.

For those who enjoyed the more Black Metal tinged side of Alcest may want to look elsewhere though since, apart from a few select sections in “Eclosion”, “Je suis d’ailleurs”, and “Oiseaux de proie”, they stay well within the realm of Shoegaze and Post-Metal to form their warm blankets of sound. The premise behind most of Kodama’s tracks is to form lush sounding, extended progressions of sound from layered guitars laced in echo and reverb atop drums that are just punchy enough to be noticed behind the soothing melodies. Minimalist guitar and vocal sections build and build to eventually culminate in a Black Metal inspired flurry of layered tremolo melodies with pseudo blast-beats and pained vocals that certainly gets aggressive enough to have an impact but never tips over the edge of sounding harsh or dissonant. Kodama is filled with incredible small moments that still leave a significant impression on me after a few years returning to this album, whether it’s the chorus vocal melody in the opener “Kodama” or the echoing guitar feature towards the end of “Je suis d’aillure”. The impacts of these small moments show how cohesive of an album Alcest were able to create, with everything seeming to fall into its perfect place as the tone rises and falls through the course of each of the tracks. The more I return to this album the more I realize how comforting it is with its supple vocals and winding melodies, but the pushing past some of the personal bias I realized that Kodama was beginning to show a few cracks after all these years.

The first half of the album is, personally speaking, Alcest’s best run of songs from “Kodama” to “Untouched”, but the final three tracks put a serious damper on Kodama’s full runtime. Although “Oiseaux de proie” is a fantastic track in its own right, after so many listens I can’t ignore the fact that it retreads a bit too much of the same ground as the first three songs without adding any of its own flair. From there “Onyx” is a more experimental interlude featuring a very slow layered progression that doesn’t exactly go anywhere, leading into the disappointing album closer “Notre sang et nos pensées”, another song that features a glacial buildup into a miniscule payoff to end the album. Kodama is undoubtedly a slow album in general with most of the track lengths reaching above 7 minutes, but I can’t help but feel let down after the end of “Untouched”.

Although Kodama remains one of the most beautiful, comfortable albums I consistently return to, it doesn’t sit atop as enormous of a pedestal as I once thought. When I was initially introduced to the likes of Blackgaze and Post-Metal, bands like Cult of Luna or Isis weren’t on my radar, so I was stunned at how elegant the layers of sound Alcest created were. As I’ve bolstered my experience in this realm of reflective, cozy sounding Metal, I feel like I’ve outgrown Kodama in some ways, expecting a bit more flair or full album cohesion overall. This remains my favorite Alcest release just due to how gorgeous it sounds, but it seems like it’s time to move on from this being my quintessential pinnacle of lighter, dreamier Post-Metal.

I've had an up & down experience with French blackgaze outfit Alcest over the years. I've always liked the idea of what they represent more than the actual result but have certainly given them more than their fair share of chances. I think the long & short of it is that I simply prefer a more dark & imposing sound so I often find myself feeling a touch outside of my element while their ethereal & uplifting brand of post-metal washes over me & that's still very much the case with 2016's fifth full-length "Kodama" although I've definitely seen myself feeling more comfortable & accepting on this occasion. Perhaps I'm simply softening up in my old age but I suspect otherwise.

I can see why Xephyr has selected "Kodama" for feature release status because I consistently found myself asking an obvious question during each listen. Is this a metal release? It certainly seems to be universally regarded as one on other metal-related internet resources & RYM has this album tagged as Blackgaze (152-9), Shoegaze (126-27) & Post-Metal (62-20) primaries with Post-Rock (127-10) & Dream Pop (101-23) secondaries. Now, that's all well & good but I'm gonna throw a cat amongst the pigeons here by claiming that there's not more than a couple of minutes of actual metal on the whole album & even then it's borderline. The inclusion of the occasional black metal scream does not tie a record to metal in my opinion & that's about the extent of it here. The instrumentation is absolutely in line with the modern Post-Rock model with several of the tracks drawing on Shoegaze for inspiration too. I'd be happy with Post-Rock as the sole primary but can see the logic in a dual arrangement as well. I'm just not hearing where all of these people are picking up the metal thing from as there's not a sign of it here. In all honesty, "Kodama" sounds much closer to Coldplay than it does to Deafheaven & that's not meant as a criticism. If it was played straight after a Sigur Ros record you certainly wouldn't feel startled & likely wouldn't miss a beat.

Musically, this is every bit an Alcest release. It's dreamy & melodic with the primary focal point being the layers of jangly guitars & the soft & unintimidating male vocals which see the listener being transported to a warm & positive world that's very much in opposition to the one we generally associate with a clan like The North. The consistency of the tracklisting is excellent with no weak tracks included & I find the whole experience to be very rewarding even if I do inevitably feel the craving for something more savage afterwards. It's often nice to be taken outside of your musical comfort zone by a quality artist that knows their craft very well & executes their plans with precision & that's exactly what we have here. "Eclosion" sees me drawing comparisons with latter period Anathema while the final track "Onyx" sees Alcest continuing their trend of finishing their albums with something a little different from the rest of the tracklisting, this time a darker & beautifully textured instrumental piece that I find to be the highlight of the album.

"Kodama" is not the sort of thing that'll I'll find myself reaching for all that often however it'll no doubt provide me with ongoing rewards whenever I do stumble on it while looking for something more specific. In fact, it's left me wondering as to whether I may have been too harsh on Alcest over the years. Perhaps a revisit of some of their earlier releases is required as God knows my taste profile has never wider & been more diverse than it is now.

The difficult challenge that many metal fans face is finding a respectable bridge to help cross the chasm into darker subgenres, and in this case, black metal. Alcest are the forefathers of the blackgaze subgenre that has become quite popular through the 2010s. Their first two albums: Souvenirs d'un autre monde and Écailles de lune are considered classics in this subgenre, and after a brief hiatus with Shelter which incorporated more post-rock than black metal, Alcest return with Kodama, a pleasant album for sure, but lacking in the many of the categories that most extreme metal fans would most likely scour at.

The guitars are produced beautifully; the balancing act of the rhythm guitar and the tremolo picking leads are superb and the fundamental bass and percussion are wonderfully balanced. Many of the main melodies however in the vocals and lead guitar feel lackluster in their performance as they feel left behind the heavy handed rhythm section.

I will say that one of Kodama's biggest faults is how slow it is. Given the fact that this is blackgaze, I cannot say that I find this surprising at all, but the overall simplicity of the tempo charting throughout this album does make it challenging to make any distinguished notes about the tracks on this album. It does have key variations so it is not as monotonous as you might think. "Eclosion" has a pretty melodic leads during the post-rock bridges, and "Oiseaux de proie" delivers an excellent display of pacing as Neige begins with melodic vocals, then opting for harsh screams, then ending with a atmo-black infused outro that serves as the best song on the album. And while "Untouched" attempts to copy this formula, it feels incredibly neutered by the lack of a release point.

If I can give Alcest anything, it that this is some of the prettiest sounding black metal you may ever hear. The wall of sound is not overbearing, and the songwriting leaves a lot of space making for some very comfortable soundscapes. This is the kind of black metal I would listen to on a beach, not locked up in my apartment surrounded by 10+ centimeters of snow. And for that, I give Alcest credit for standing out. While Deafheaven have proven that blackgaze can be just as much intense as the black metal tag would suggest. I do like this record, but would argue that it is one of the bands lesser works. Kodama should be seen as complimentary material to the first two albums.