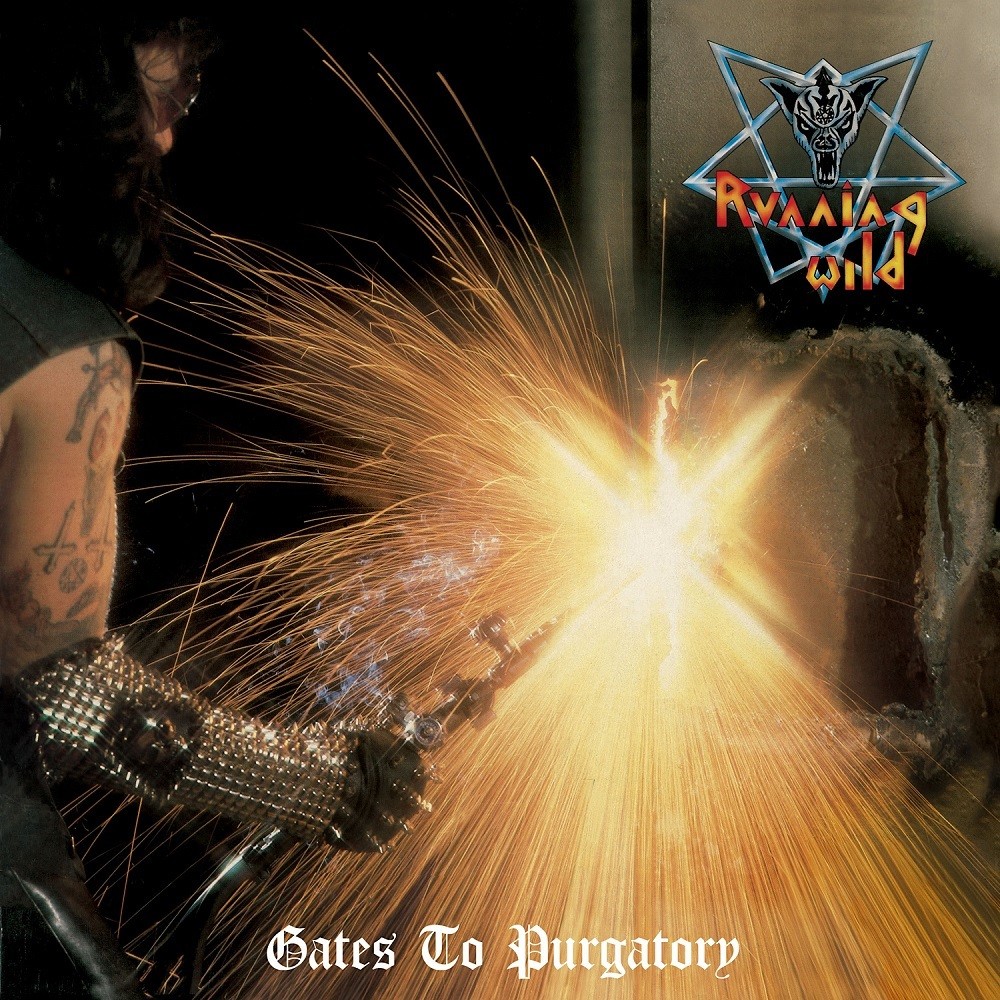 I've pretty much always known Running Wild weren't always pirate-themed, that it was only really with their third full-length, Under Jolly Roger, that they became the salty sea dogs we know them as today. But I'd never actually tried out those early pre-pirate releases, so this one would be an interesting experience.

Instrumentally, it's not a radical departure. There are some tracks where it shifts into slightly unexpected territory, but you can certainly hear the same gritty speed metal that would carry them on so well later on. Lyrically though, this is very much a different kettle of fish. It's surprisingly dark, by early 80s standards anyway, with an infernal theme loud and clear. You're hard-pressed to find a song on here that doesn't reference Satan and/or Lucifer; "Preacher" could easily be a Mercyful Fate track sans King's falsetto delivery, while "Soldiers of Hell" would feel right at home on any of Venom's early albums. Like those bands, this might not strictly fit in as "black metal" per se, but the lyrical direction is there.

And honestly, it's a good time. Setting aside any existing expectations of a Running Wild album, this is decent speed metal. "Genghis Khan" has a great fun rhythm to it, the sort they'd later put to great effect in their sea shanties. "Soldiers of Hell" has some absolutely gorgeous solo work that really carries you off and away. "Adrian S.O.S." and "Victims of States Power" are straight-up thrash fucking metal. The vocals can at times be a bit buried in the mix, but that aside this is solid stuff.

I can certainly see why the style changed later, as there's a vibrancy in the instrumentation here that can feel at odds with the darker lyrical themes. Something had to change, and I'd happy Running Wild went in the very rewarding direction they did. That said, Gates to Purgatory might not be part of the iconic Running Wild catalogue, but it's definitely worth a spin for any classic speed metal fan looking to be Lucifer's friend!

The debut from Running Wild ticks all the boxes in terms of balls to the wall metal intensity.  Considering what the band were to become over the years it does stand out as a weak point also.  Despite the points it achieves for effort the delivery is poor and one-dimensional.  You are essentially listening to the same track over and over again, such is the lack of variety on the album.

It is hard to tell where one track stops and another begins as at times breaks between tracks seem like pauses on one long track as the next rack that starts adheres to pretty much the same pace, tempo and structure.  The songwriting criteria on this record did not have the bar set very high at all it seems.  Now, this is not to deny the credentials of the musicians involved.  What quality is here is delivered by obviously individuals, the guitars in particular save the day on more than one occasion but they can only do so much I am afraid.

I think considering this was their debut and maturity clearly was lacking there is perhaps an argument to give them a little more slack but when your thought process is to regurgitate the same riffs and occasionally say menacing words like "satan" then the game plan is too flawed from the off.  Yes, the core heavy metal component parts are here but they feel force-fed as opposed to being offered in any discernible menu format.  Imagine a meal where all four courses are the main meal, you get the same meat dish over and over again and this pretty much is what Running Wild serve here.

The initial era of German heavy metal was dominated by two bands in Scorpions & Accept & we'd have to wait 'til the mid-80's before we'd see the introduction of another major contender. The artist I'm referring to is of course Running Wild & they’d go on to play an important role in the late 80’s & early 90’s metal scene. But for the purposes of this review, we’ll just be focusing our attentions on their debut studio album, 1984's “Gates To Purgatory”.

Running Wild first formed in Hamburg back in 1976 so they’d been around for a while by this stage & I think you can hear that maturity in the execution here. The band seem to know their sound quite well & don’t try to over-extend themselves on their first effort. Instead this four-piece outfit tend to keep things fairly simple & focus on the song-writing. The production has that authentic 80’s underground metal sound & I think it really works for Running Wild here.

Musically you can expect a fairly short album with just the eight songs included; three of which fall comfortably into the speed metal category with the other five being more in line with the classic heavy metal sound. As with most of the European metal scene at the time, the NWOBHM was certainly the major influence on Running Wild & I’d probably describe them as a mixture of Judas Priest & Venom with bits of Iron Maiden here & there. The Venom influence is really obvious in the speed metal tracks but also in the lyrics & image with “Gates To Purgatory” sporting mainly Satanic themes & imagery. It’s interesting because this is certainly not in line with the band’s later works which were amongst the first to tackle predominantly pirate-related themes. There’s a lot of Judas Priest in the riff assault on offer here while the dual guitar attack also reeks of Judas Priest's Tipton/Downing combo. The inclusion of guitar harmonies often leaves me thinking of Iron Maiden though. As does the obviously Maiden-esque “Genghis Khan” with its hilariously mispronounced chorus. This isn’t the only time you’ll hear that sort of thing on the album either. “Preacher” sees Running Wild taking a temporary side road through Black Sabbath territory while “Black Demon” seems to indicate that Megadeth’s Dave Mustaine might well have been a fan as it sports a pretty similar sound to some of Megadeth’s early-to-mid 90’s albums.

Front man Rock ‘n’ Rolf doesn’t sport the trademark high-pitched European heavy metal approach. He takes a much more gruff direction & I’d suggest that Venom’s Cronos & Tank’s Algy Ward might have been his two main influences. It’s interesting that I can hear a fair bit of the early European thrash metal bands like Sodom & Coroner in some of Rolf’s delivery & I’d be willing to bet that those bands were all over “Gates To Purgatory”. Particularly Sodom as you can hear it in the thrashier riffs here too.

But the big problem with Running Wild’s debut is in the song-writing I’m afraid. It’s just not a consistent enough album. I only like four of the eight songs with the B-side being pretty weak & seeing the album out in sluggish fashion. Many might disagree with me on this topic but I find the hooks to be too obvious & simple at times. I mean take a listen to the closing number “Prisoner Of Our Time” which is clearly the most popular track on the album. To my ears it just sounds pretty flat with very little energy & a chorus that’s trying way too hard. "Gates To Purgatory" is all a bit too accessible for a band with this sort of potential & I subsequently find it to be a disappointing listen even though it promised so much early on.