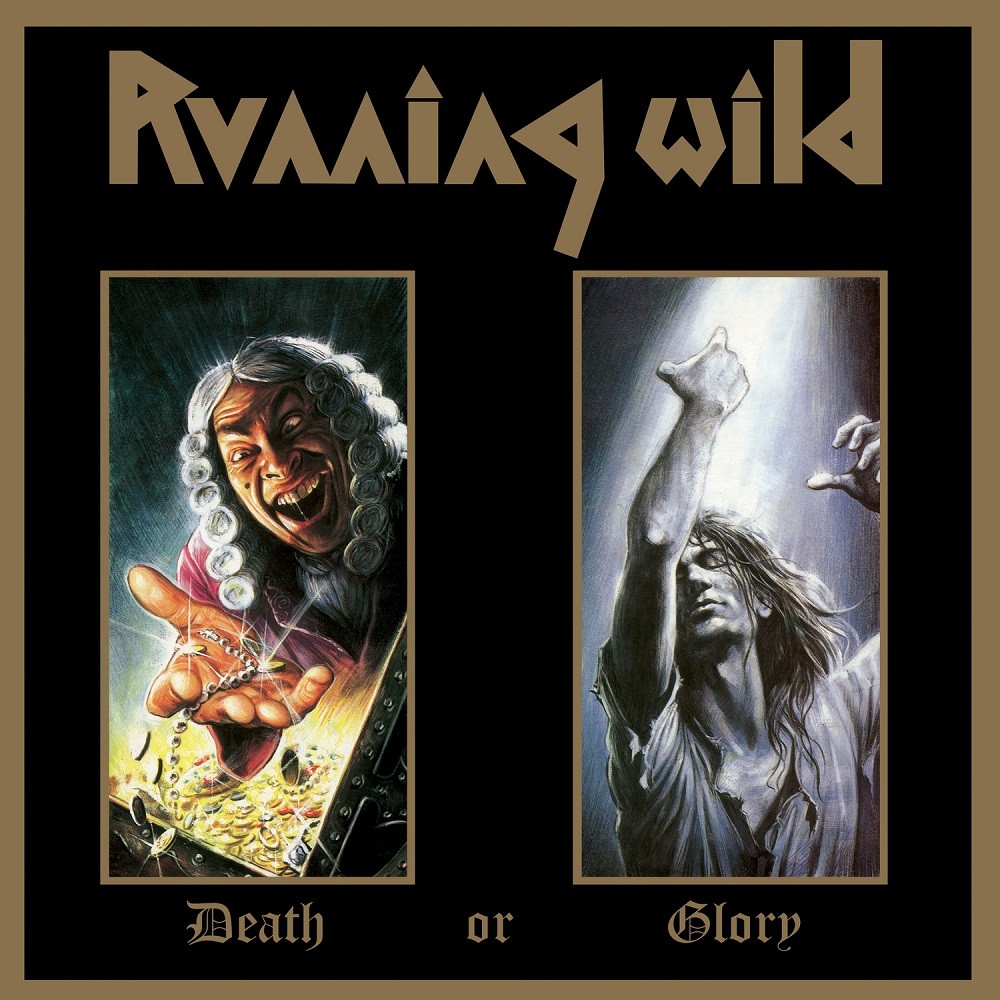 I have a lot of albums that I consider the "best albums" (5 stars) even though it's like a couple hundred of them, but no... THIS album, Death or Glory is one of the true best! Ever since the previous Running Wild album Port Royal, they've fully established a different epic lyrical theme...pirates! Though if you think this band isn't serious about that theme, wait until you hear Alestorm. Death of Glory sounds so glorious and I can't wait to listen to their previous two classics that started their pirate motive...

This album truly is a masterpiece made by some of the most genuine metal pirates around, especially a couple real highlights. But in order for me to get to those highlights, I'm gonna do what I almost always do; track by track! Hold on to your (barrel) seats...

The first track is the highlight "Riding the Storm". After the two-minute intro that sounds like it could've inspired the Pirates of the Caribbean soundtrack in the compositional sense, the vocals by Rolf Kasparek come in to shine, especially in the chorus filled with emotion. The riffs cross through like a violent thunderous typhoon into your head, as the charged-up verses and powerful choruses are brought together by the drums all in this unforgettable song. That's the pirate metal "Thundersteel"! Next track "Renegade" is a catchy tune, though a bit slower. "Evilution" is much slower, but never in a bad way. Near the one-minute mark, the guitar majesty starts, leading to a massive riff. Another solid song, for anyone wanting heavy metal similar to Sanctuary instead of the death metal invasion of bands like Edge of Sanity.

"Running Blood" (almost the band's self-titled theme track) is also great, giving the structure more style and the riffing more genius. "Highland Glory" is the instrumental intermission which has different diversity in an effective sequence of melodies. Then back in the speedy business, "Marooned" blinds you with awesome guitar rhythm, especially after the first chorus. The drumming is also some of the greatest here with interesting fills. There's powerful riffing in the outro as well. Yet another one of the greatest tracks in this album!

Then here comes the classic single "Bad to the Bone". You're gonna f***ing love this song whether or not you're a metalhead! SO AWESOME!!! Next up, "Tortuga Bay" is speed metal madness closer to their first two albums. The song itself is a h*lla d*mn fun headbanger! The title track has that same vein, though not as fast but still good, with a wonderous solo. The original vinyl version's last song "The Battle of Waterloo" is a big epic that you can't miss whether you're listening or reviewing. F***ING UNBELIEVABLE!! It starts with bagpipes during a march into a Napoleonic battle between French soldiers and pirates, then the battle rages on with mid-paced riff before a perfect transition into the marvelous majesty of the solos, especially the second one of evoking emotion. Then the song ends where it began, with the same great marching rhythm that began the heaviness. A true piece of pirate metal!

Similar to Blind Guardian's Somewhere Far Beyond, I say the original vinyl version is perfect as it is, but then comes the bonus tracks, starting with the one ending the CD version, "March On". This one is actually pretty boring and doesn't go anywhere. It would probably be decent in a more mid-paced heavy metal album, just not this one. The rest of the bonus tracks have appeared in the 1990 reissue and most other reissue afterwards as the Wild Animal EP, starting with the EP's own title track with a cool riff in the intro, but not a lot is special in this song. The pirate-themed lyrics are still cool. However, the vocals are weak and don't grab the listener as much as the album itself. All bad things aside, there's some more soloing greatness! "Chains & Leather" (re-recorded from Branded and Exiled) is the best, most kick-A song here! The riffing will have you headbanging in delight through the cool lyrics. This re-recording should've been the album's original CD bonus track! "Tear Down the Walls" is a cool song ranging from slow to fast, and the chorus riff is well-played. However, lame lyrics, weird-ish vocals, and a repetitive chorus demote the song to just OK. "Störtebeker" has f***ing awesome lyrics and riffs, the latter along with the soloing reminding some of Iron Maiden. Another fast song that should've been part of the Death and Glory album itself!

So despite that bonus track in the original CD version and half the Wild Animal EP being f***ing weaklings, the main part of Death or Glory has some of the best production. The ultimate pirate-themed heavy/power/speed metal album! Yo-ho, let's go!!

Running Wild are one of the earliest Power Metal bands around, starting as Speed/Heavy Metal but moving closer to true Power Metal by the end of the 80’s. With each release, they sailed further from mediocracy to uniquely speedy melodic pirate metal with delicious riffs and gruff but talented vocals. Death or Glory is the peak of their 80’s material and often cited as their magnum opus.

The opening track “Riding the Storm” is indeed possibly the finest Power Metal song that had been laid to record by 1989. The guitar leads weave melodic, infectious riffs around a constantly pummeling rhythm section that keeps the song at full energy the whole ride through. The vocal performance is just awesome. Never a dull moment in the epic rocking of over 6 minutes. The title track “Death or Glory” captures this in a similar vein. Though much shorter, the atmosphere is just as epic and powerful, and that chorus stands against the best. Two prime examples of what a perfect Power Metal song should be.

Unfortunately, while the rest of album is great, there’s nothing else that can really hold its own against the aforementioned tracks. It mostly just blends together as strong but unmemorable material. It’s also a bit of a problem when the album starts on its highest note and ends on its lowest (the slower “March On” leaves a bit to be desired and sounds like an arena rocker). Truly, Running Wild wrote some of the best Power Metal songs of all time, but Death or Glory as an album doesn’t quite match such standards.