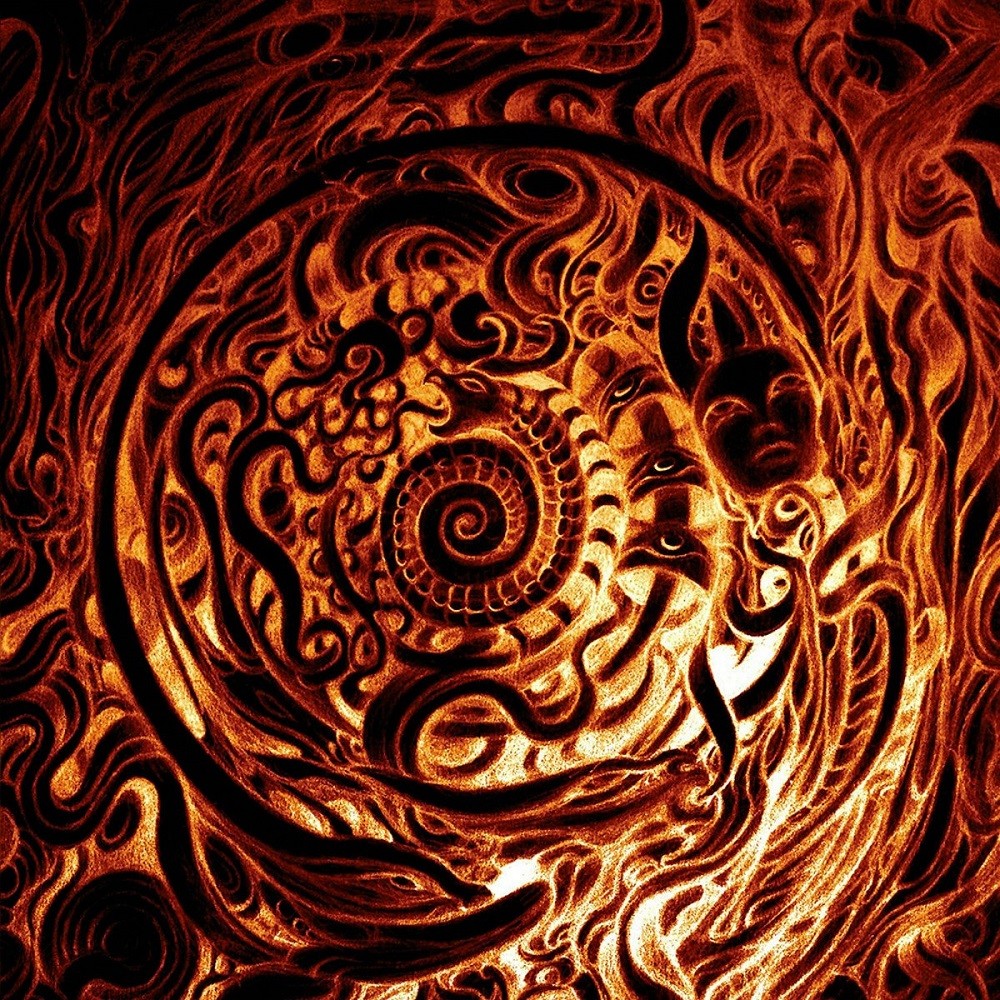 Esoteric emerged in the early 90's, quickly invented a new version of the music of Saint Vitus and Candlemass, and since then they've been inducted in the pantheon of doom metal.  Their funeral sound has lots of replicators but no equals... or at least that's the story.  Truth is, I've only heard a handful of funeral doom albums.  But that doesn't mean I don't like the genre at all, since there are plenty of slow-moving metal artists I like, notably The Ocean, Neurosis, My Dying Bride and Solstafir.  So it should be no surprise that I enjoy slow doom like Esoteric, and their most famous for its surreal sound is The Maniacal Vale.

Some people read the lyrics as they go along an album with indeterminable vocals.  Me, I say, "if it's indeterminable, then it's optional."  I decided to look at this album from the perspective of the aura itself and just let it all take me away.  "Circle," the opener, made the easy.  The 20-minute epic sacrifices melody and rhythm to draw you away into a dimension of deathly energy, lost in uncharted space.  You've essentially hit the astral Bermuda Triangle.  This is post-metal at some of its most atmospheric.  And honestly, I hate it when post-metal songs just play the same not constantly for their riffs.  "Circle" does that occasionally, but its atmosphere is so effortlessly thick and dense that you feel smothered.  This is what doom itself is supposed to sound like.

And it got to the point where every track on the album was essentially putting slight wistys and turns on that same trick, meaning despite the shifting in tones, the album is essentially a very clever one-trick pony.  Now this isn't a bad thing if the trick is still very good each time it's played, but I can't help but compare longer albums to other longer albums, especially when a focus on heavy atmosphere is involved.  As a result, I instantly compare this to other dark, deathly and atmospheric bands: Swans, Neurosis, My Dying Bride and Sleep.  With several of their albums, there's more creativity boasted, even in a longer runtime like the two-and-a-half hour Soundtracks for the Blind.  So I wouldn't put this album in the same league as that album or The Seer.

But for 100 minutes of doom metal, each of these minutes is beautifully produced and written, so the album still greatly succeeds at giving a doom metal fan what he wants to hear, especially is he's looking for the funeral sound.  It's unlikely that I would recommend this to the average metalhead to start them off in funeral doom.  But once they get into funeral doom, they should check this out.  They may end up loving it.

This album, in common with many funeral doom releases, is not for the faint-hearted. It's extreme length (101 minutes) and heavily introverted lyrics make it an inaccessible listen for many. But for the patient, who have maybe cut their teeth on more accessible extreme metal, this is a supremely rewarding listen and one of the premier doom albums of all time.
Whilst the lyrics are indeed introspective, focussing as they do on pain, loss and death, the music, despite being pulverizingly slow and heavy, also has a spacy expansiveness that acts as a counterpoint to the morbidity of the words and the desperation of the growling, howling vocals, evoking the majesty of the universe and outer realms, as if offering the listener an alternative to such morbid introspection.
Despite the length of the album and the reputation of funeral doom for being monolithic, this actually has quite a bit of variation, from earthy plodding to soaring majesty, and stupefying bleakness to visceral savagery. There's even some full-on uptempo death metal during the (relatively) short closer to disc one, Caucus of Mind.
The whole is an extreme metal band on top form, both songwriting and performance-wise, supremely confident in what they are doing and not willing to compromise in any way. It may be a fanciful thought, but after listening to such supremely satisfying extreme music as this, seemingly tapped in to the unspoken truths of life and the universe, it sometimes feels impossible to go back to (relatively) meaningless and unchallenging mainstream metal. This really is one of those albums that may genuinely change how you feel about the music you listen to.