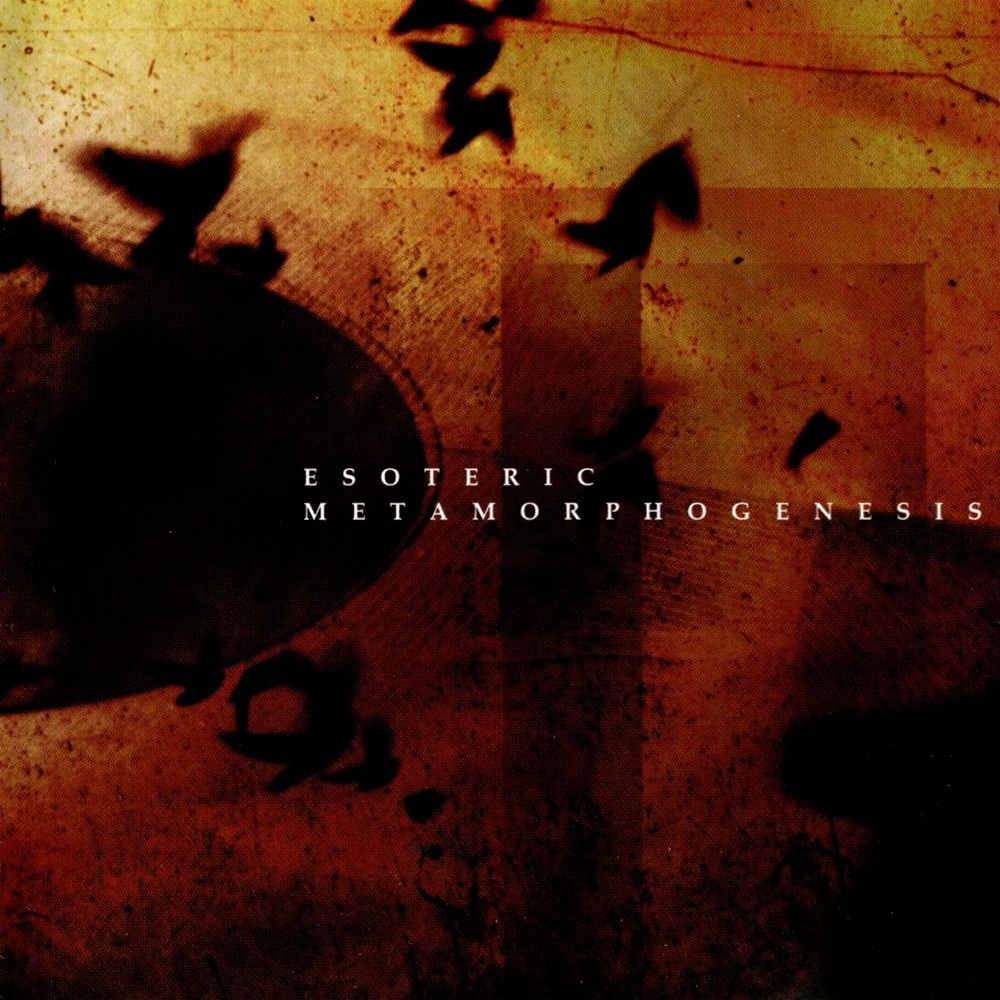 If you had read my previous review of the 105-minute long Esoteric album, The Maniacal Vale, you're probably familiar with my one criticism of the album: the length made it repetitive.  So you'd probably think the five-star rating for Metamorphogenesis comes from the fact that it's only 40 minutes long, and is there shortest album, especially since repetition is a staple of funeral doom.  Um, no.  That honestly has so little to do with it that it's not even worth mentioning.  It's true that Esoteric have a tendency to draw out their albums to an extent that harms the release itself.  This has been true since their second album, The Pernicious Enigma, which was a one-trick pony in every single way.  But the real glory of Metamorphosis comes from the fact that it's so jam-packed with new ideas, twists and musical influences that some have even described the album as "batshit insane."  Considering what we typically get for doom metal, we need an album or two that gets batshit insane.  I'd have loved for the album to be longer, but we still got 40 minutes of brilliance.  It's no longer a repetitive shift from funeral doom to death doom to psychedelic doom.  What we have hear is an eternally progressing 40-minute work that throws in random moments of drone metal, post-metal, straight-up death metal and more.  And each piece of the puzzle delivers a loud blast of rage that's trying hard to fight its own melancholy but always succumbs like a normal human does.  The best combination of musicianship and production that doom can have is the very reason this album exists: a production-oriented 40-minute epic of atmosphere and emotion, giving us something that Esoteric have never replicated.

It was hard to know what to expect when I revisited 1999’s third studio album from Birmingham funeral doom metal stalwarts Esoteric recently. I’ve had a wide array of experiences with this album in the past with my enjoyment levels varying greatly depending on my mood, my fatigue levels & the strengths & weaknesses of my listening device of choice. In fact, it’s not uncommon for me to find my first listen to be a hard slog as “Metamorphogenesis” can be particularly inaccessible at times & I usually find that it doesn’t open up until the second listen. It’s therefore very important to give it a few spins before making any sort of judgement & (despite my having checked the album out a few times before) my first run though on this particular revisit was still pretty tough going. This is largely contributed to by the incredibly dense production with the extensive layering of different elements seemingly melding into an impenetrable & relentless wall of nonsensical noise that requires you to have all of your faculties available to you in order to make sense of what’s going on. It certainly didn’t help that I was quite fatigued after work either as my brain simply wasn’t up to it but everything made a lot more sense on repeat listens. The use of headphones is also highly recommended as it seems to draw all of the disparate elements & layers closer together from my experience & once everything clicks you’ll see the record in a completely different light moving forwards.

“Metamorphogenesis” takes the form of three lengthy pieces ranging from 11 to 17 minutes in duration & adding up to a total of 44 minutes. This makes it a relatively short release for Esoteric when compared with their previous two records which were both double albums. But never fear! You won’t find any 3 minute pop songs amongst this lot with the tracks ranging from twelve to seventeen minutes in length & you shouldn’t expect to be humming along to many melodic hooks afterwards either. Interestingly, two of the three tracks begin with all guns blazing instead of employing the gradual slow build-up model that seems to be a standard with this sort of music. It can actually be pretty jarring if you’re not ready for it. Particularly with the first track as I always forget to prepare myself to experience a sudden barrage that includes multiple vocal & lead guitar tracks going right from the word go. But I guess you could say that Esoteric’s whole approach to music is confronting. Their unique style of funeral doom metal can be overwhelming & suffocating in its density with separation between the instruments having been sacrificed in favour of sheer weight & volume. The bass that forces its way out of your speakers is somewhat akin to that of drone metal in a way as Esoteric seem to employ the use of noise & speaker reverberation in a similar (but less obvious) fashion & the use of repetition is also used for a similar purpose. Despite the huge amount of different parts that are layered into each piece, these tracks are drawn out for days & I wonder about the influence of post rock on the band as there’s a definite similarity to the way they build towards a crescendo over a long period & with the listener not really noticing.

Unlike most purveyors of funeral doom, each of the three tracks included has its own unique personality but shares similar characteristics. The space & cosmic themes the band employs suit the instrumentation to a tee with loads of effects being utilized to take the listener out of their comfort zone. In fact, some sections seem to have been intentionally composed of completely disparate parts that make no real sense but ultimately contribute by putting you into a defined head space before the next section comes in to crush you with ridiculously heavy but equally beautiful instrumentation. The experience is noticeably psychedelic & the idea of a bad acid trip comes to mind on more than the odd occasion. But I don’t say that in a negative fashion. It’s simply that Esoteric sound like no one else on Earth on this album. Their use of dual vocals is both relentless & unintelligible but it’s used as more of an accompaniment to the overall soundscape than as a musical protagonist. The lead guitar work is also a constant with the melodies of bands like Katatonia & Anathema being the obvious reference only never in as twisted a fashion as you’ll be submitted to here with the various licks being drawn back into the wall of noise rather than sitting out front on their own.

Once it clicked with me, I found “Metamorphosis” to be an astounding album. It took me to realise that some of the things that initially caught me off guard were intentionally employed & that Esoteric wouldn’t have achieved such an otherworldly result without them for me to see the true genius in this music. It shares a lot in common with Australian doom/death legends diSEMBOWELMENT in its psychedelic qualities & thick & unique atmosphere &, while we’re on the topic of Aussie music, I also hear a lot of “Paradox”-era Cruciform in the riffs & structures with the band not being afraid of lifting the tempo on occasion too. Most doom metal is all about those riffs & Esoteric possess those in spades but they don’t feel the need to thrust them down your throat when there’s so much more to be said. Funeral doom metal can often be one-dimensional but “Metamorphogenesis” almost has too many dimensions for its own good at times. Esoteric can take you to uncharted parts of the universe with this music & I can’t recommend “Metamorphogenesis” enough.