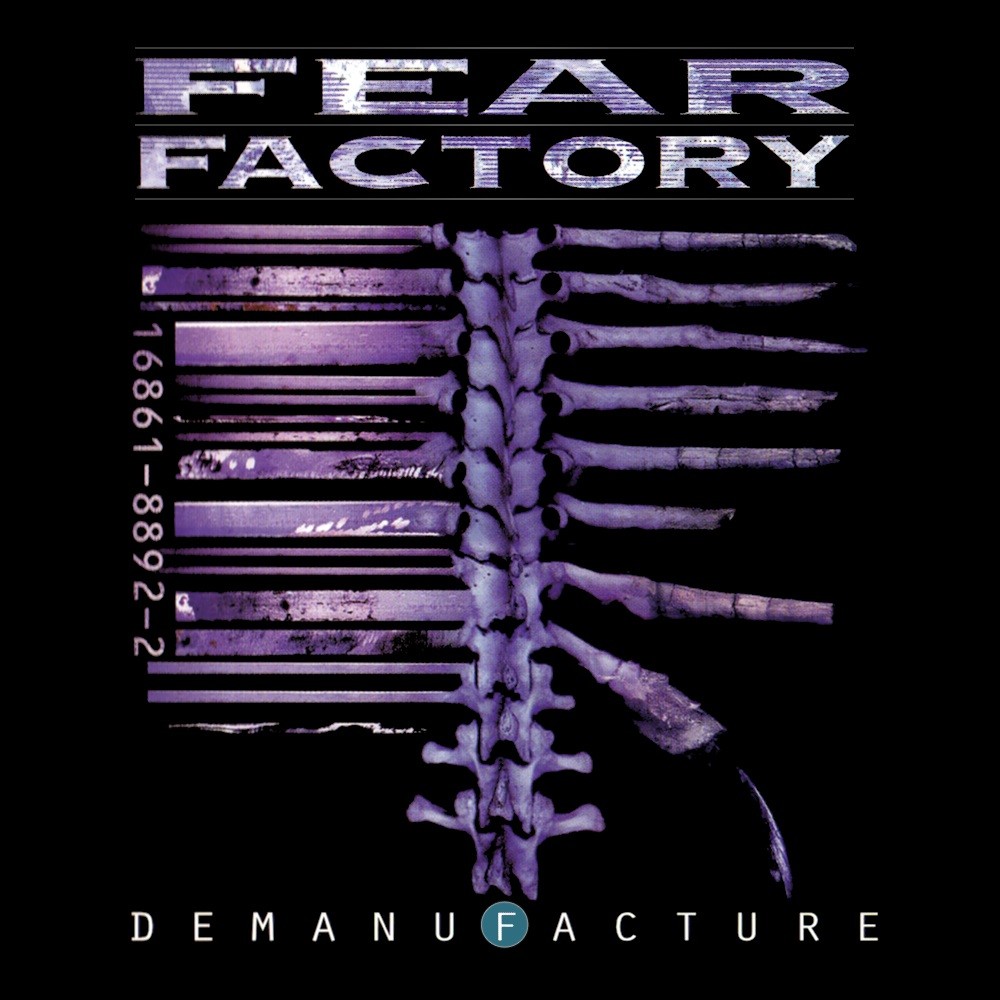 I first encountered popular Los Angeles-based industrial metal outfit Fear Factory in late 1992 following the release of their debut studio album “Soul Of A New Machine” which was gaining high rotation on my local underground metal radio programs at the time. The band’s sound wasn’t exactly my usual cup of tea as I was firmly entrenched in the more brutal end of the extreme metal scale by that stage however I hadn’t heard anything quite like Fear Factory before with their foundations seemingly sitting somewhere between the death metal I was so enamoured with & a futuristic industrial metal sound so I found myself intrigued. This quickly led to me handing over my hard-earned cash at the local record store & “Soul Of A New Machine” fast became a staple in the household diet of not only myself but also my younger brother Ben. I was much more wary of 1993’s remix E.P. “Fear Is The Mindkiller” given that electronic music was still universally regarded as a dirty word with metalheads but the idea of a follow-up album was definitely something that tweaked my interest.

Fear Factory’s sophomore album “Demanufacture” would finally see the light of day almost three years after their debut which was a very long time between drinks by the standards of the day. By that stage my tastes had sunken even further into the dark caverns of brutal death metal & blasting black metal so it wouldn’t see me racing to the shops to secure my copy on this occasion. Ben wouldn’t waste too much time in securing a copy though & I’d become exposed to “Demanufacture” on a daily basis from that point on, an exercise that became increasingly enjoyable over the first month or so as the hooks & concepts became more familiar. This certainly wasn’t the same Fear Factory that had made a significant dent on the metal scene a few years earlier. It was a more mature & refined Fear Factory that had cast aside most of its death metal roots & was now pushing a more accessible & melodic yet no less potent approach that would see them breaking down any remaining barriers that might have previously prevented them from becoming a household name in the world of every teenage metalhead. The machine-gun rhythms & precise execution that had made “Soul Of A New Machine” sound so fresh a few years earlier were all still there only this time there was a much stronger focus on song-writing with a combination of clean & more aggressive vocals being employed by front man Burton C. Bell which added an entirely new element to the mix. Bell’s gruntier efforts were a little less deathly than they had been previously but seemed to fit Fear Factory’s sound a little better while the clean chorus hooks gave Fear Factory an all-new accessibility as they maintained & expanded on the edginess that had made the debut so popular without ever losing artistic credibility.

Dino Cazares’ straightforward & predominantly rhythmic approach the writing riffs wasn’t anything new by this stage with the likes of Pantera having already popularized this technique over the previous five or six years & it was all fairly simple when you looked at it closely. However, Dino’s execution & timing was impeccable & this would see him taking some relatively simple riffs that were based on only a few notes & making them into something much more substantial than they would at first appear. A major component in his success in this regard was his incredibly tight relationship with his rhythm section & bassist Christian Olde Wolbers & drummer Raymond Herrera deserve a lot of credit here. All three musicians were focused on a single, incredibly well-defined outcome & we see them throwing their entire focuses into providing the listener with a physical reaction that sees their body tying in with the tight machine-gun rhythms. Herrera deserves some special credit here because this outcome could only be achieved through an exceptionally precise performance behind the kit. In fact, his use of kick drum is just as much as much of a protagonist in these riffs as Dino’s guitars are & this would become even more noticeable in a live environment (as I would find out on the accompanying tour). The intelligent integration of Reynor Diego's synthesizers & samples at key moments is also impressive as it provides additional layers of colour & contrast.

Interestingly, time has seen my affiliation with the album’s more highly celebrated tracks fading a little to the point that these days I actually regard the opening title cut as the weakest inclusion in the tracklisting. It’s a touch more accessible & obvious than the rest of the material with the other major anthem “Replica” sitting in a similar space. I’m not saying these tracks are poor though by any stretch of the imagination though, only that they offer me less appeal than the rest of the album & in truth this is probably more of a compliment for the overall consistency of the tracklisting than anything else. I mean there’s not a dud to found amongst this lot & I actually think the deeper cuts in the back end of the album are its real strength. In fact, these days I’m the most closely tied to the closing two numbers “Pisschrist” & “A Therapy For Pain” & these are the only cuts that I regard as genuine classics, particularly the epic goth rock-inspired final number which sees Fear Factory taking their most melodic leap of faith &, in doing so, achieving a triumphant & quite majestic outcome. Almost all of the other tracks sit at a very high standard however Fear Factory’s style was never closely aligned enough to my own tastes for me to become as excited as some of the fanboys out there. Sometimes this was to do with the clean choruses not quite cutting the mustard after some seriously great introductions & verse sections & when listening to the album with fresh ears I’d have to suggest that Bell’s clean delivery is both the strength & weakness of “Demanufacture” as his contributions at key junctures in each composition would either make or break the song’s chances of hitting the top tier. At other times it was to do with the strong groove metal component which is not really my forte if I’m being truthful. Pantera & Machine Head had clearly made a very strong impact on the band on the evidence of some of the more straightforward riffs on “Demanufacture” & this gave Fear Factory a real crossover opportunity given just how popular those bands were at the time.

At the end of the day though, it’s very hard to be critical of “Demanufacture”. It’s a high quality metal record in every respect & if my tastes were slanted a little more towards the more accessible end of metal then I feel that I’d probably rate it a little higher than I do. There’s very little doubt that it represents the high point of the band’s career & they’d struggle to recreate its incisive vitality & hook-driven memorability for the rest of their days. I’m very glad that I had the opportunity to experience the band while they were still very much in their prime as my subsequent experiences with a live Fear Factory have been generally underwhelming, mostly due to the Bell’s complete loss of any singing ability. “Demanufacture” should be essential listening for all fans of the industrial metal genre.

In my admittedly very limited experience, I find that industrial metal's need to emulate the dehumanising nature of technology often results in quite stilted-sounding music (bands like Static-X for example). It's as if the need to replicate the machine-like rhythms ends up becoming victim to that very dehumanising trait that the music seems to be railing against. For me the success of Demanufacture is that it is still quite an engaging listen, allowing a glimpse of the unquenchable essence of humanity despite the towering banks of computers and machinery threatening to overwhelm it, being led particularly by Burton C. Bell's vocals, the human centre of the album. On the Skynet/Matrix side, Dino Cazares' crisp and hefty guitar riffing is the very epitome of the technological domination of the battle space of each of the album's eleven tracks, the machine-like rhythms seeking to subsume the last core of humanity into the machines' hive mind and the synths just add to the isolation of the atmosphere, like a wind blowing through a landscape of huge automated factories - as far as the eye can see it's all straight lines and right angles with no natural curves or irregularities
So what the fuck am I talking about? Basically there are some killer catchy, almost anthemic, metal tunes on display here - Self Bias Resistor, Dog Day Sunrise and Body Hammer especially come to mind and the final minute and a half of Pisschrist still sets the hairs on the back of my neck on end - "Crown of black thorns, Human skin, ripped and torn, Where is your saviour now?" It has been a very long time since I last played this record, or any even remotely like it I guess, but despite all the water that's passed under that particular bridge, Demanufacture is still a pretty good listen and playing it now it feels a bit like a call from an old friend you've not seen for ages and didn't realise you missed as much as you evidently do.