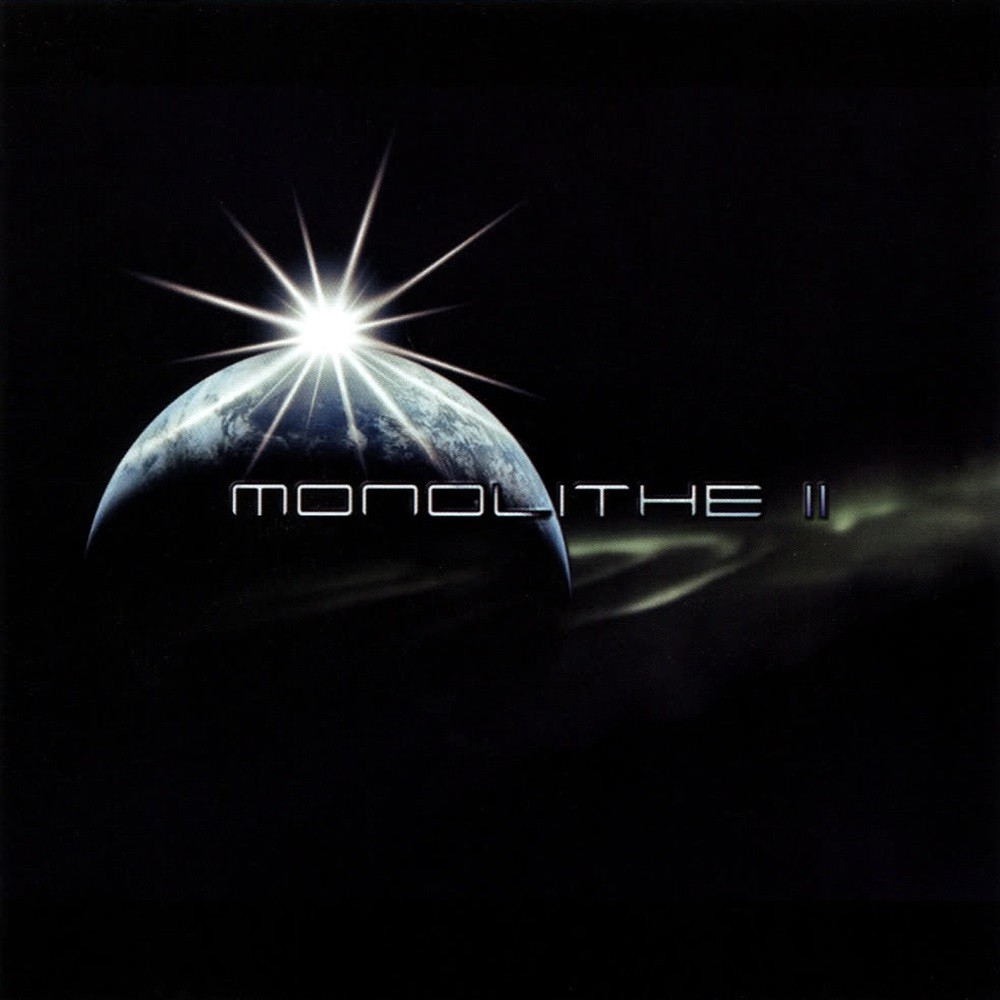 The funeral doom metal subgenre & I have a long & rewarding history as it’s a movement that I got involved with very early in its evolutionary timeline back in the early 1990’s. I really bought into the feeling of isolation it promotes & felt that it was just what I’d been looking for at the time. Over time though, I tended to find that it wasn’t the type of thing that I could listen to all that often without becoming restless & also that there weren’t nearly enough bands that were doing anything particularly different with the original prototype so these days I opt for an occasional return to key bands & releases that I find to be genuinely rewarding. After the last couple of days though, I’ll be adding French four-piece Monolithe to my list of agreeable options.

Single-track albums haven’t been something that I’ve had a particular interest in over the years. I rarely see the point in extending a single piece to those levels of excess with only very rare examples of releases that genuinely manage to captivate me by taking me on a cohesive journey that’s worthy of my undivided attention. Green Carnation’s “Light Of Day, Day Of Darkness” & Meshuggah’s “Catch Thirtythree” immediately spring to mind however for every win there are several examples that fall by the wayside. In order for a single track of that length to achieve a consistent level of intrigue it must take the listener through a number of rewarding movements that are easily differentiated from each other but still work together as a fluently flowing piece in its own right. Does the fifty minute “Monolithe II” work in this capacity? Well yes & no. Unlike Edge Of Sanity’s “Crimson”, this is definitely one long piece rather than sounding like a bunch of different parts pasted together & whether that’s something that you have the patience for is up to the individual really. “Monolithe II” certainly doesn’t stray too far from the theme it begins with but, at the same time, it’s not all that hard to identify highlight sections of the album such as the significantly more intense & climactic period that appears at around the 25-30 minute mark. It just takes a fair amount of building to get to that point with the atmosphere tending to sneak up on you so that when the peak finally arrives you’re not all that sure how you got there.

Monolithe champion a melodic brand of funeral doom metal that’s not unlike that of many of their peers however they do offer a point of difference in the consistent use of accordion as a melodic centrepiece along with the strong use of keyboards for atmospherics. There’s a conscious sense of grandeur about this album. It isn’t the most desolate example of the subgenre as the tempos don’t get as ploddy as some of their contemporaries & the overall concentration on melody gives it a lighter feel. For this reason, I often find myself reaching for comparisons with the death doom metal subgenre as there are some easy comparisons to be made with the simple melodic guitar themes of bands like My Dying Bride & Paradise Lost here. The death-growled vocals of Richard Loudin aren’t the most original you’ve ever heard either but they’re certainly serviceable. I do feel that he could have opted for a little more variation though as he doesn’t really command the listeners attention all that often, instead tending to compliment whatever melodic concept the instrumentalists are exploring at the time in order to accentuate the big atmosphere that Monolithe are trying to create.

Ultimately, “Monolithe II” is a very strong example of the funeral doom metal sound & I can understand other members awarding it some of their higher scores. For me personally though, there are a couple of things that will always keep it grounded in the upper realms of the also-rans. Whilst the use of accordion certainly creates an interesting point of differentiation, I can’t say that I think it fits the funeral doom format all that well as I find it to sound a little bit cheesy at times. In fact, I regularly find myself thinking that it might sound more at home on a Summoning record which isn’t a positive thing if you know my feelings on that particular artist. I’d also like to see Monolithe making a greater effort to change things up a bit. A stronger focus on light & shade might have made the 50 minute run time seem a lot less arduous in my opinion. Regardless of these minor blemishes though, “Monolithe II” definitely possesses enough atmosphere to successfully maintain my interest for its duration. It just doesn't peak in intensity enough to command my higher ratings. It’s an impressive accomplishment from a classy outfit but it’s not as emotionally engaging as the premier releases in the funeral doom subgenre.

For fans of Ea, The Howling Void & Remembrance.

I don't want to come on here and hate on funeral doom. It makes a lot of sense given the crushing atmosphere that is implied by the subject matter that it sounds like a dirge and gives you the crushing feeling of being lowered six feet underground. But holy shit is it boring! And this is not just a criticism of Monolithe, but many of this genre's most influential figures, like Bell Witch and Esoteric.

This album took me three attempts to finally get through it in a single sitting. And trust me when I say this: it was almost a fourth attempt because I was so drowsy and uninvolved in the music that was on display, but I forced myself to continue listening through to its deathly conclusion. I am not opposed to single track albums; Light of Day, Day of Darkness is one of my favourite records of all time. But Green Carnation had something that Monolithe desperately lack, and that is a sense of growth, or in the case of funeral doom, decay. It took this album nearly half and hour before it decided to modulate out of its main theme. Leading up to this, Monolithe waste time by having moments that seem like a divergence from the original theme, but only serve as temporary bridges from theme A to... theme A again. There is so much obvious room for refinement and cutting of the fat that this could have worked, but instead, Monolithe are convinced that long, unchanging atmosphere can win me over, when it actually makes me want to go to bed!

I feel horrible for the drummer in this band who does the bare minimum when it comes to tempo support, and is only able to add some occasional double bass and drum fills whenever its time to feed the cat... and the cat died five years ago. The guitar work is okay I guess; most of the record has a rhythm guitar who just chugs away with the lowest power chords, while the lead guitar sounds more like a continuous solo instead of a melodic lead to compliment the synth and vocals. And while I did enjoy the synths on this album, the vocals are so far back in the overall mix that you would be hard pressed to hear them if you weren't using headphones. And the low end of this album is severely lacking; the rhythm guitar is so prominent in the mix with its power chords that the bass has nowhere to breathe. It makes an album that is supposed to be dense and concaving feel remarkably timid.

For the death doom sound specifically, I am reminded of records like The Call of the Wretched Sea by Ahab and Songs From the North by Swallow the Sun. These albums are long, brooding and atmospheric as well, but these records both had the songwriting presence to lead you down the dark and terrifying path and bring you somewhere that is colder and more isolated than where you started. The Monolithe albums hear the starting gun go off, trip before the first hurdle, and then don't even attempt to get back up and try to finish the race; they stay in place. I'm generally not one to criticize an album that typically receives glowing praise, regardless of genre, but I just cannot tolerate this. If you ever wanted to know why my ventures into funeral doom metal are tepid, I present exhibit A.

Monolithe's sound has progressed over the years from their early 2000's monolithic (pun intended) funeral doom, through a more death doom-orientated middle period to their current progressive doom phase. As time has passed it has found the Frenchmen becoming more adventurous and slowly developing their sound which has inadvertently (or maybe not) made them relatively more accessible.

Anyway to this month's feature which is most definitely in the "early funeral doom" phase of the band's evolutionary journey. Monolithe II takes the form of a single fifty-minute track, in common with each of the band's first four albums and, the funeral doom newcomer be warned, it relies heavily upon repetition, particular of the opening theme, for the layering and build-up of it's pervading atmosphere. If you are an impatient type of metal head then you are probably best leaving it at that and going back to something more likely to get your blood pumping because this is not an adrenaline rush of an album. Rather, this is a carefully constructed release that cradles and envelops the listener in a sonic womb of slow, thick riffs run through with veins of atmospheric instrumentation that utilises keyboards, gorgeous guitar refrains and even, in a nod to their homeland's folk music, an accordion (provided by guest Manuel Mechling) which, surprisingly, sounds fantastic and fits in perfectly with the vibe the band are attempting to convey. Meanwhile, whilst the music cocoons the unwary listener, vocalist Richard Loudin croons into the ear with his deathly growl like some Babylonian god of dreams, one moment comforting, the next discomfitting. This really is the kind of album that you have to let wash over you and consume you, allowing it to enter into both your conscious and subconscious mind and the most rewarding listens are when you are able to give yourself up to it completely, let go and see where it takes you. For me this is genuinely relaxing and soul-cleansing music, in the same way as with certain ambient pieces, this is the kind of album who's atmosphere takes you out of the everyday and transports you to a less mundane place, opening up the imagination as it does so.

However, it must be said that there is very little variation in pacing throughout the entire runtime, nor is this the glacial crawl of real extreme funeral doom, sitting comfortably in a medium-paced range. Neither does it convey a cloying atmosphere of melancholy that is typical of the genre, often feeling quite uplifting, so again this may annoy some funeral doom purists for not being sufficiently funereal. Yet it does posses a few moments where the tone changes and becomes more discordant and when this does happen it can sound quite menacing. Overall I would say this is a beautifully put together album of extreme doom metal that rewards the listener the more they are prepared to invest into it. An immediate release this isn't and I can understand why some wouldn't care fot it, but as far as I am concerned this is doom metal heaven.