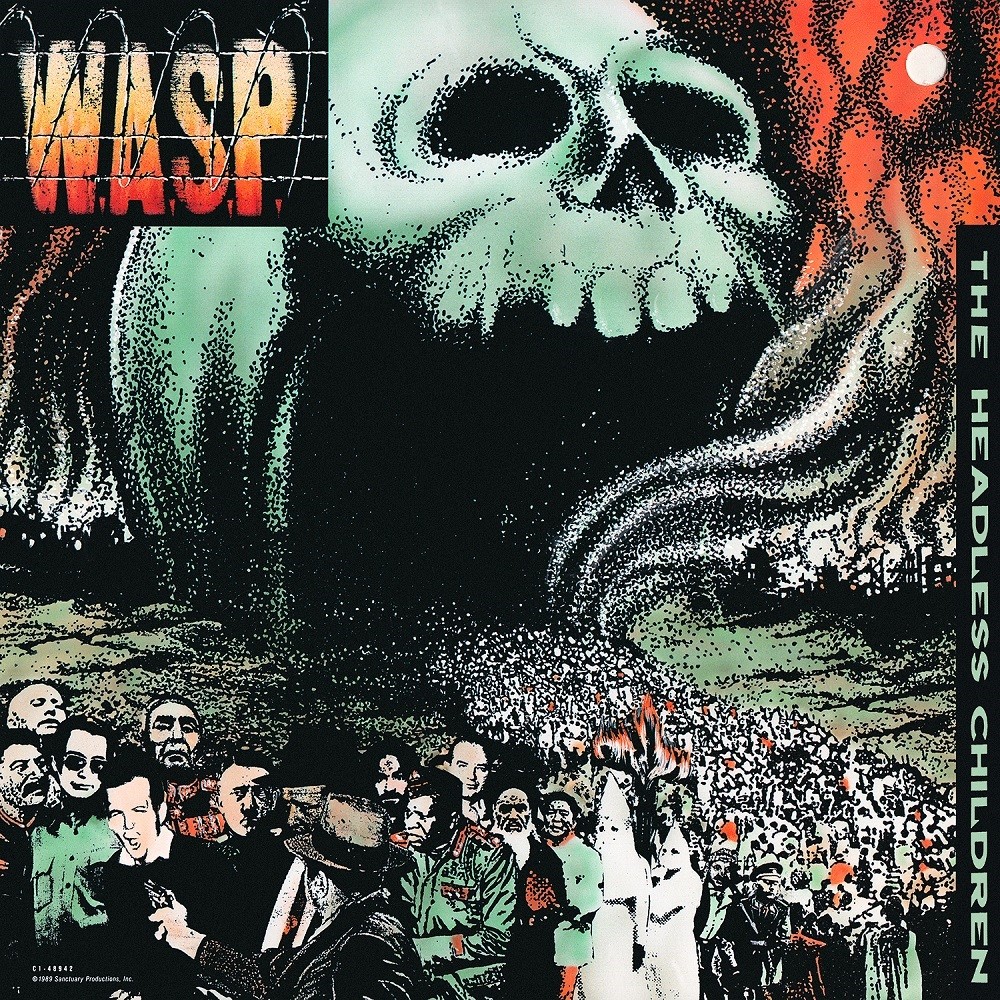 WASP is not normally a band I would take seriously. Blackie Lawless thinks he can deliver some of the most epic rock since the doomy founders of heavy metal Black Sabbath, attract women from massive crowds, and sound like The Who. However, he sounds closer to Slade, the band that would remind you that next month (as of this review) "IT'S CHRISTMAS!!!". Despite Blackie's silliness and the band being associated with the glam metal scene, The Headless Children has killer metal delivered to your doorstep. He might as well join The Cult (the band) as say stuff like "Woah-ow, baby!!" multiple times. The entertainment in this sure beats that of neo-folk!

I'm glad to start hearing what WASP is about with not their shaggy earlier material but instead an album where they get more serious and heavy. There's no need to question their metal sound nor f***ing compare it to their peers, except for maybe a guitarist drink-off with Metallica. The Headless Children shows the band ascending into more mature consistency, and that's what I like. WASP has done pretty much all of it right to bring their metal to the stratosphere.

The great opener "The Heretic (The Lost Child)" rips through more advanced melody than before in their usual heavy energy. The vibe is similar to Iron Maiden at that time with a dark tone of progressive melody for great ambition. Blackie takes over on rhythm guitar, allowing Chris Holmes to let his leads rip through the excitement of vibrant soloing and insane effects. Impressive guitar talent straight from Hell's kitchen (NOT the show)! Then they bravely tackle a cover of The Who's "The Real Me" in pretty cool chemistry. That's the kind of step Death has taken with their cover of Judas Priest's "Painkiller". The Who cover really is impressive, with Johnny Rod's bass reaching strong notability, though the drumming isn't too ideal while still good. RIP Frankie Banali... The title track is my favorite song here with gloomy choirs.

For any classic hard rock fans worshipping Uriah Heep, check out the intro of "Thunderhead"! That song itself is an effective ballad that would fit well in later albums such as The Crimson Idol. After those serious tracks, "Mean Man" is like a more awesome take on the Judas Priest album I've reviewed, British Steel. That song is based on the wild lifestyle of Chris Holmes, with awesome guitar talent from the man himself. A simply infectious song for a man raised by wolves! However, he left the band a year later for more time with his wife. Hammond sounds spread through "The Neutron Bomber", along with sounds of the police. Pretty awesome, right!?

The acoustic interlude "Mephisto Waltz" lets you take a break and look back at this amazing journey built so far. However, the one letdown that prevents me from giving this album 5 stars is the average ballad "Forever Free" that reminds me of a cheesy scenario of cowboys riding under flying crying eagles. The organ melodies still taste good. "Maneater" continues the raging metal. "Rebel in the F.D.G." (F***ing Decadent Generation) closes the album with the most exciting solo here along with rebellious lyrics.

Don't be fooled by Blackie Lawless' gothic appearance! This isn't the dreamy gothic rock of the Sisters of Mercy, this is real heavy metal of f***ing brilliance. The Headless Children might not be perfect, but it's still amazing and beats many other albums of the glam metal scene by a mile. Maturity pays off!

Seven years of recorded output into their shocking and graphic career, W.A.S.P. started to show some signs of mellowing.  The energy levels would be the same on their fourth album but here for the first time was evidence of the band coming of age.  Songs had a little more structure and the offering overall felt a little less "in your face" this time around.  Thankfully none of this was at the expense of the unadulterated entertainment value that tracks from the group always brought; the band seeking to maintain the memorability factor despite the advances in song writing so obviously apparent.

By the end of 1989 Blackie Lawless would disband W.A.S.P. for the first time (the other occurrence being some four years later) and had they gone out on this record then it would certainly have been a high note for the time.  Here was the upward swing in terms of improvement of Lawless' penchant for characterisation in his song writing.  Credited for writing seven of the tracks here, Blackie introduced fans to the likes of Neutron Ronnie and Maneater as well as the stereotypical Mean "Motherfucking" Man.  As with earlier outings these were all nefarious and vivacious characters that exuded a nonchalant and frisky lifestyle that most fans longed for.  The difference this time around was that things just felt a little more focused in terms of social awareness; a tad more grown up, missing some of the "ha, take that Grandma!" attitude of the first three albums.

The randomness of The Who cover at track two is perplexing though as is the pointless "Mephisto Waltz" that precedes the EP release "Forever Free" .  This instrumental piece really grates and just feels like filler from the first listen.  Like wise the aforementioned ballad is highly overrated despite being well placed in the album to maintain interest late on in the track listing.  That having been said the big tracks more than make up for these slack moments with "Mean Man", "Rebel in the FDG" and the title track all making loud and positive noises over the course of the ten tracks.

A definite step up from the first three albums and the start of a more mature and reflective style of song writing, The Headless Children smelled of a band going places and showing some real promise.  A promise realised in full three years later with The Crimson Idol.  Although this album doesn't stand up well in comparison with the follow up in terms of pound for pound stature, it still remains an important release in the progression of  band who had already left a virulent and obtuse mark on the world of metal and were now looking for a different spin to progress with.