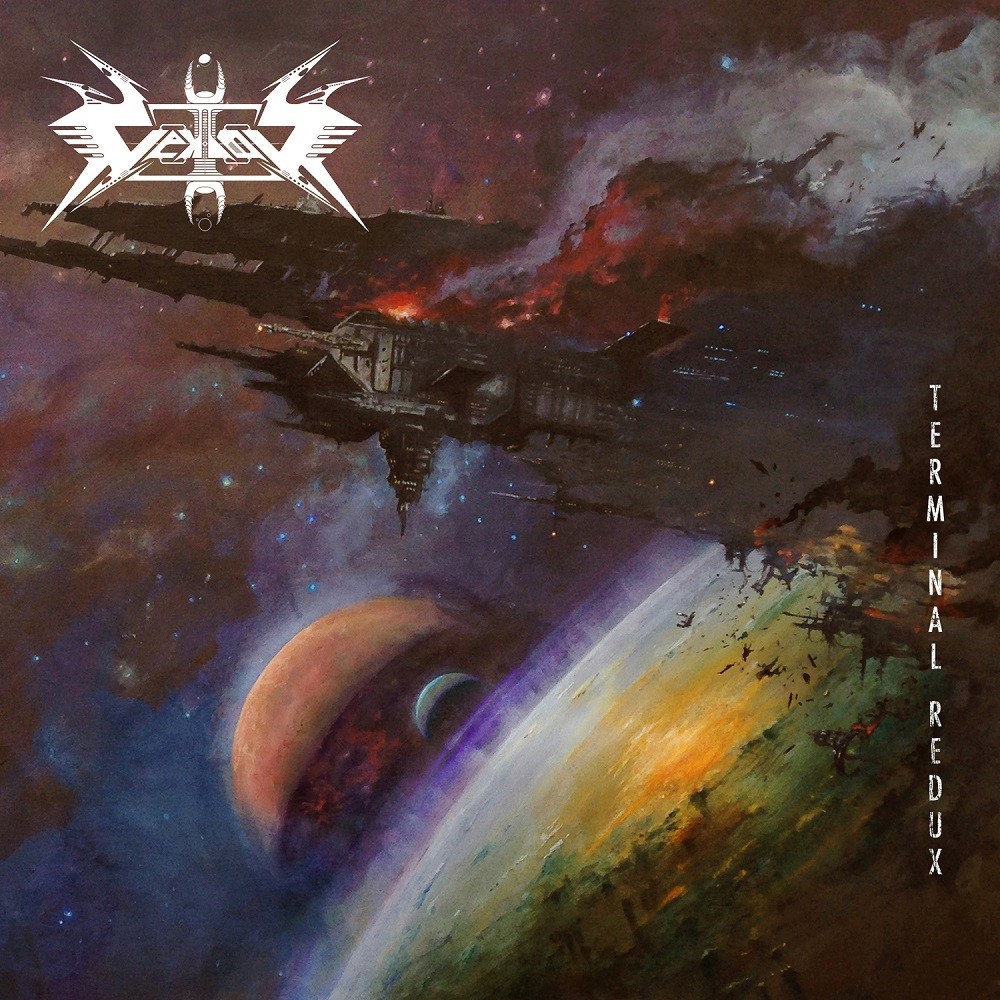 Think about this album in this scenario... One night, you're just lying down on your bed trying to sleep, when a brilliant bright light shines through the window. You look out the window and see a giant spaceship! You run outside and enter the spaceship, and it's a special spaceship that can give you an actual tour from Earth to the edge of the Solar System. Cool scenario, right? But that's NOT what Terminal Redux is about! This concept album is about something different but a cool sci-fi theme...

Almost 5 years after Outer Isolation, Vektor shows a new piece of sky-high expectations. Terminal Redux is their first ever (and likely last) concept album, about an astronaut using immortality to gain vast power and ends up in existential crisis, and a great metaphor about the space-thrash band themselves.

"Charging the Void" is a great epic to prepare for the incoming elements of this album. New elements are mixed with older ones from previous albums. Another thing new is clean singing, here being sung by what sounds like a soul choir, bringing to mind Disney film soundtracks such as Frozen and Moana. Fortunately, that does NOT cause harm to the band's music and instead adds more atmosphere. Of course, the other new element is the superb concept, but we'll use the scenario I made up throughout this review. The spaceship you are in blasts off from Earth and begins the tour to the edge of the Solar System. "Cygnus Terminal" is the first example of calmness mixed brutality in this album. In the original concept, this song lets you know more about the all-controlling Cygnus Regime with the astronaut's power rising within. Meanwhile in my scenario, the spaceship passes Mars during the Solar System tour. "LCD (Liquid Crystal Disease)" is one of my personal favorite tracks in the album and the most aggressive one too. It is the fastest track here and has some of Vektor's sickest riffs yet. There's a stellar breakdown after the first 3 minutes, like what?! Wicked! That song has lyrical commentary about how the world is dependent on technology nowadays.

"Mountains Above the Sun" is a well-placed melodic instrumental break for anyone who wants to take a breather, but it's a little too boring here. The only heavy part is the last 15 seconds, and it sounds too bluesy. Meanwhile, the spaceship makes a quick pit-stop near Jupiter to get gas. Get it?? It's a gas giant, LOL!! "Ultimate Artificer" is NOT the ultimate Vektor song, but it definitely makes up for that boring interlude. In the original concept, this song is about the astronaut's ultimate goal to restore order for the galaxy in a matter of life and death. Meanwhile in my scenario heavy gravity of Jupiter begins to pull the spaceship down, and everyone on-board has to flip switches to activate hyperspeed. "Pteropticon" is another aggressive song and a better contender for the ultimate Vektor song. The spaceship breaks free from Jupiter and hyper-speeds through the rest of the Solar System, continuing the tour. "Psychotropia" is another psychotic highlight. "Pillars of Sand" is another song that starts calm before the chaotic storm. After the spaceship passes Saturn, Uranus, and Neptune, a shocking discovery has been found; Pluto is destroyed and reduced to numerous asteroids (a good theory about Pluto no longer becoming a planet). Then some missiles appear out of nowhere and begin hitting the spaceship. You put on an astronaut suit and helmet with tons of air supply and shoot yourself out of the airlock. You manage to escape just in time for the spaceship to be hit enough to collapse and explode.

"Collapse" is, in my opinion, probably the weakest track of the album, maybe even by the band, sounding more like an attempt to imitate a Metallica half-ballad. The first half is a cheesy power ballad with David DiSanto's poor attempt in clean singing. In my scenario, after watching the spaceship explode with everyone in it perishing, you float in the remains of Pluto and lose hope in returning home. As the jazzy clean guitar strumming plays and the growling coincides with the clean singing, you begin wondering what those missiles were about and why they destroyed the spaceship. Then when the heaviness returns, which is fine but doesn't make up too much for that poor first half, you notice another spaceship run by an alien army from another galaxy who are planning on destroying the Solar System from Pluto to the Sun. You don't know what to do about it, but luckily there's an asteroid heading your direction, so you land safely on it and begin riding the asteroid. Both the first half of "Collapse" and the "Mountains Above the Sun" interlude are the two reasons why this album doesn't make a perfect 5-star rating.

But the epic finale "Recharging the Void" totally makes up for it. This is my #1 favorite of this album, maybe even by the band! Every single element of Vektor are compiled smoothly here. What's even more interesting is the small samples of many of the previous songs in this album to remind of your amazing adventure so far. Well currently, you're riding the asteroid and you find another giant missile following you, and riding that missile is the alien army leader. You find a Lightsaber-like weapon in your astronaut suit pocket, and the alien leader also has a Lightsaber-like weapon. You and the alien leader engage in epic Lightsaber battle until you manage to cut off a fin of the missile, causing the missile to turn the other way and hit his spaceship, destroying it and killing himself and his alien army, accidentally. As the soul-like singers and David's clean singing return in a softer ambient part, you feel relaxed and confident, glad to be on your way back to Planet Earth. As the song builds back up to heaviness, you realize that considering the speed and size of the asteroid, it might actually end up destroying Earth. You start to panic, again not knowing what to do. As the guitar riffing comes in at 3 minutes left, you find a keytar in another pocket on your astronaut suit and start playing the sh*t out of the keytar to over-energize the asteroid in an attempt to destroy it. That climax is BEYOND epic, almost reminiscent of some of the greatest Wintersun epics ("Starchild", "Sons of Winter and Stars", etc.). When the asteroid is about to break, you jump off as it explodes into small chunks floating in other directions. You saved the Earth!! However, you're still in the same speed as the asteroid and heading toward Earth, so you have no choice but to accept your impending doom as you enter the Earth's atmosphere and burn into dust and ashes as you fall fast. Right at the final "YOU!!!" ending, your ashes hit the ocean and sink into nothing. And then you wake up from that epic dream, lying on your bed, all fine and everything. End of scenario!

Despite not being as perfect the other two Vektor albums, Terminal Redux might actually be one of my favorite metal albums of 2016. This is a true thrash masterpiece with as much sci-fi as Star Wars. Metal and Sci-fi shall NEVER DIE!! But I really hope Vektor doesn't, and it doesn't look so well, since everyone except David DiSanto is out of the band and he's currently facing legal troubles involving domestic abuse. But I guess we will have to see what the future of Vektor holds.....

Terminal Redux is the sweeping sci-fi metal epic I always suspected Vektor were capable of.

What stands out most to me about this album is how it blends songwriting that could be called "ambitious", "progressive" or even "artful" with a simultaneously unrelenting technical assault. The balance of both sides of the metal coin that Vektor achieve here is one that very few bands have ever pulled off, and the subtle black metal textures just make their sound even more unique and otherworldy.

Aside from the overarching lyrical story, Vektor take some bold musical risks on this album. And they ALL pay off...thousandfold. The purposeful inclusion of things like clean, female and chanted vocals add a layer of tension, build-up and pure climax to Vektor's sound that wasn't there before. These elements are placed so perfectly within the progressions of the songs that they just feel so incredibly natural and impactful. For example, the subdued clean lead vocals in "Collapse" are surprisingly emotive and offer a respite that enhances the impact of the album's grand finale "Recharging the Void", which is my song of the year and also the closing statement of this band as we have known it. The 14-minute thrash opus throws together all of the aforementioned elements that are touched on separately throughout the album into what can only be called an epic. Words cannot express my love for the chanted female backing vocal melody near the end, utilized perfectly to forge a sonic bridge back to the album's opener "Charging the Void" and enhance the grandiosity of the biggest moments. The song is a roller coaster through time and space, with highs and lows building up to a climax that explodes into your ears like a star going supernova. The closest comparison I can think of would be the Fall like a burning star! section of "Starchild" off Wintersun.

While the epics that bookend Terminal Redux are amazing and innovative and surefire classics, this is not an album that loses much steam in the middle either. "Cygnus Terminal" is interesting conceptually and includes an absolutely beautiful guitar solo that sort of springs forth out of nowhere and unfolds like a majestic tapestry of stars. "LCD (Liquid Crystal Disease)", "Psychotropia" and "Pillars of Sand" are more traditional Vektor thrashers, fast technical masterclasses chock-full of awesome headbanging riffs and memorable, kickass vocal parts. "Ultimate Artificer", which was a huge grower for me after a few months of skipping it, sits somewhere in the middle, shorter than the proggier songs but with a sprawling blackened climax that hints at the heights of "Recharding the Void" to come. The only song that still does not do much for me is "Pteropticon", which just feels a little forgettable and by-the-numbers compared to all the other extraordinary songs on offer. Without it, this might be a 5-star album.

Whatever the future of Vektor may or may not hold in light of the band's recent announcements, Terminal Redux would be one hell of a way to go out. In addition to being Vektor's greatest achievement, Terminal Redux is also one of the greatest achievements in all of technical/thrash metal and 2010s metal. This album should be cited as a classic and influential landmark release for decades to come.

Congratulations Vektor and thank you for turning many a nighttime stroll into blast-offs through stars and across aeons.