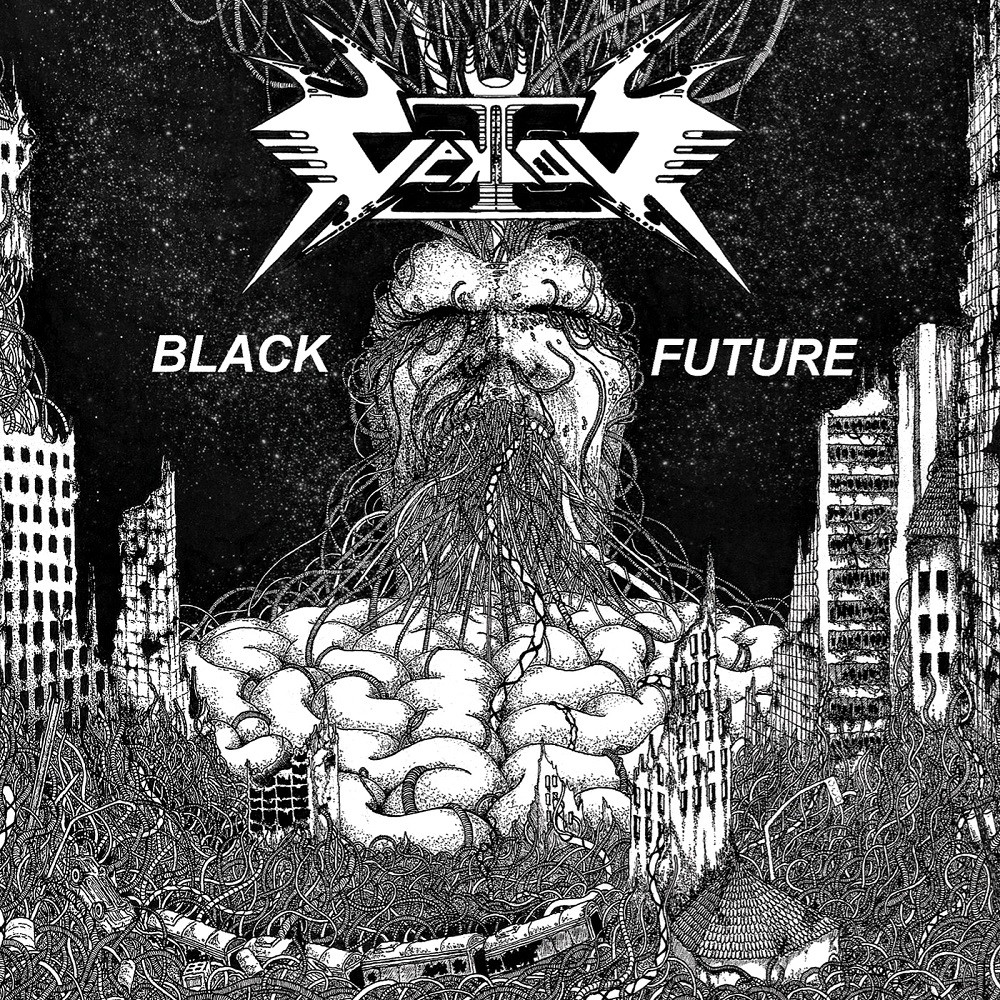 Black Future in the Black of Night...One Soul's Solo Flight

I don't freerun too often, mostly because I'm a lazy ass who would usually rather spend an evening watching 5 episodes of Netflix, but Black Future had me going when I threw it on for the first time that one fateful February night in 2016. From the punchy groove of the opener to the building epicness of "Forests of Legend" to the sprawling transcendence of "Dark Nebula", this album - on first listen - gave me one of the most exhilarating adrenaline rushes I've ever experienced.

For ~2 hours nonstop, I stormed around Austin's urban landscape in the black of night while blasting this album's incredible energy. It almost seemed like a soundtrack custom-tailored to my experience. As I sprinted up a particularly steep hill, the crescendo of riffs in "Forests of Legend" reached its climax just before I triumphantly reached the top! The bouncy thrashing of "DNA" as I jumped stones across a river. And so on.

Going in, I was well-aware of the hype it has received from the tech/prog/thrash crowd, but it still managed to exceed my expectations. Vektor harkens to a diverse array of influences, but it is its own snarling beast. Like all genre classics, it builds upon the work of predecessors to form sounds new and original. In delightful contrast to many modern thrash bands, there is no obvious comparison. Black Future is one of those grandiose albums that is executed so beautifully that the momentum sweeps you off your feet as it goes on. Melodic, yet tenacious and primal. Not to mention the ace musicianship. Yet, a common criticism I'm seeing is that many of the songs could be shortened to even further sharpen their impact. I agree with this for the most part. This album has a bit of fat that, if trimmed, could push it to the next level. That said, I'm a hypocrite. The two 10-minute tracks are by far my favorites.

"Dark Nebula" in particular stands out as a legendary song that I will still be listening to many years from now. The traces of black metal extend from just the vocals to all the other instruments as well for this one, and the progressive composition lends itself to a degree of emotiveness I did not expect from Vektor.

All of the time spent, all of the years

All of the moments that led me to this place

What will I do now that I am here?

Riding further into the night

A search to be content with what we are

And to look and find a place among the stars

A place we never planned to be...

The way this part played out reminded me of something Primordial would write in one of their sorrowful, brooding hymns like "The Soul Must Sleep". One of the reasons I like to parkour/freerun at night is because there is no one else around. No cars. No noise. Just empty spaces. Eventually the exertions of my body fade into the background and my instincts take over, allowing me to drift into a sort of music-induced introspection or meditation. As "Dark Nebula" guided my journey across parking lots and bridges, those above lyrics really pierced me as I was thinking about my life. Emboldened by the swirling darkness of "Dark Nebula" and the darkness around me, I defiantly decided that I AM content with what I am.

Fuck loneliness and fuck all the people and things I've spent my life longing for. All I need is myself. Me. I. And music like Black Future that allows me to escape on my own from the unplanned places life's journey will bring me. I ran the rest of the way home with a defiant grin. Now, if you'll excuse me, I'm going to go freerun to Terminal Redux.

A few people might think Vektor is a Voivod ripoff, but...BOY WERE THEY WRONG!! They just don't see how much of a difference this band makes! First off, the instruments really work well together with precise drumming, tight riffing, and bass with more than one note per bar. The instrumentation is really cool, but what's really amazing is the vocals by David DiSanto. Forget about his domestic violence present for a while and check out his vocal range that's beyond belief. His vocals are in the same kind of level as Destruction's Schmier, but his high soaring screams are near-impossible! I bet he does what Michael Jackson used to do, grabs his own b*lls hard.

The guitars are so unique and really stick out in this album. One unique thing that marks a different approach is the F-tuning (a half-step higher than standard E tuning). I think more bands should start tuning their guitars up to F or F# 6-string, or even C or C# 7-string. When they play a riff that sounds familiar (other than the higher tuning), suddenly a different never-before-heard riff smashes into your face, while keeping constantly high quality. What's also pleasant is, the solos are magically placed in fields where you would never expect. But in the parts where you do expect a solo, they are short and end up coming out anti-climatic. However, the guitarists are really skilled, and despite those solo setbacks, they can master them as super well as DragonForce.

The title opener is probably the best track of the album. They really balance the thrash and progressive styles perfectly without having to copy anything. "This song won't write itself," rushy people say, but it's as if that song did! "Oblivion" is another great song, but it gets a little dull. It's late-Emperor-esque intro is actually the "Spiral Galaxy" intro from their demo Demolition. After that, it's on to the actual old-school speed metal intro before the Destruction-like shrieking comes in. Also, the end is a bit rushy, another good reason why I prefer its Demolition version. "Destroying the Cosmos" is another song that was re-recorded from the Demolition demo, and while I like this one better than the demo version, it doesn't quite reach the standards of the other songs besides "Oblivion". However, that solo-riff combo throughout literally the last minute is one of the most epic song endings I've ever heard! Great strength in an otherwise "meh" song!

"Forests of Legend" is an absolute highlight and the first of three 10+ minute epics. It begins with an eerie acoustic intro that sounds like the progressive thrash "Bard's Song (In the Forest)", before the heaviness begins building up before crashing safely into early-Megadeth-style speedy thrash. After that, it's back to the eerie acoustic section before another glorious outro! "Hunger for Violence" is a Voivod-like composition, opening with strange symmetric chords before heading into Theory in Practice-like violent heaviness. "Deoxyribonucleic Acid" which is what "DNA" stands for, opens with a speedy version of an Iron Maiden riff before its scientific thrash ascension.

"Asteroid" is less technical and more rock-ish in the first few minutes, and while not quite reaching the climax, an incredible charge thunders in with solid bass, sounding like when Lemmy's bands Hawkwind and Motorhead collide and travel into the future. The second 10+ minute epic "Dark Nebula" is probably the least superior of the epic trio, but it's still great. It shows a bit more of a Pink Floyd influence than Voivod while keeping the technical thrash virtuosos. "Accelerating Universe" is the 13 minute true diverse crowning highlight, initially starting with Metallica hammering thrash, it gets more epic and heavier throughout, even developing an amazing psychedelic atmosphere in the halfway point, before building back up into a heavy speedy ending.

My vocal criticism towards modern thrash metal has been well documented over the last few years. If you may have missed it, I have a huge problem with thrash metal bands, old and new, that believe that it is simply acceptable to ride on the coattails of nostalgia. These sorts of groups never bother to push the boundaries of what thrash metal can potentially be, and they almost all do it with the same, heavy as hell guitar, no bass production. It makes a genre, which at one point was the pinnacle of heavy metal music, is now over-saturated with hundreds of groups trying to be the next Slayer, Metallica, etc.

Of course, there are exception, which brings us to Vektor, a Pennsylvanian based thrash metal band and their debut record, Black Future from 2009. This album borrows elements from many different sources to create what could have been described at the time as a one of a kind thrash metal experience. They were clearly trying to fit into the mold of bands such as Coroner and Voivod, but ended up making a genre all their own and one that is now being copied by groups such as Cryptic Shift today.

And where this album gets it right is in the production. For as simple a formula as thrash metal is, it baffles me how many groups can get this wrong and make the same mistakes with frequency. Vektor redirect this by giving the bass a very important role during the albums slower sections, and while the faster, pure thrash sections split the difference between riffage guitars, and real bass lines, allowing for the vocals and lead guitars to soar. And boy do they ever! David DiSanto has a real grit in his vocals that make these lines hit with authority. His vocal timbre is certainly an acquired taste however! If you recall Tom Araya's early days and the howls you would get on records such as Show No Mercy and Hell Awaits, well take that and put it on crack! These squeals are ridiculous and might put some people off, at least initially.

Vektor have a knack for songwriting and it pays off here. I really enjoy the form in which these songs are built and how every single note is given prominence. Vektor are not contempt with introducing an idea at the start of a piece, then modulate somewhere completely different and never return to that original idea again. "Black Future", "Deoxyribonucleic Acid" and especially "Forests of Legend" all have tremendous connectivity and should be commended. I will say however that some of these transitions do not work as well as Vektor thinks they do. I have a suspicion that many of these transitions were tried only one way. Sure, going from theme A to B sounds great, but what about going from B back to A? It does get a little disjointed at times, and the dynamics as well as sudden tempo changes leave me with a sense of whiplash. This seems to be a recurring problem even today in progressive music.

"Accelerating Universe" and "Forests of Legend" both highlight that Vektor are able to create long songs and have them feel unified. This is very important because, a long song that doesn't develop can get boring very quickly, but a song that jumps around too much can feel pretentious. And with that, I basically described my biggest problems with both thrash and progressive metal in the modern era SOOOOOOOOO....

I really enjoy Black Future by Vektor. I'm not going to call it my favourite record of theirs (that would probably be Outer Isolation), but I can see where this band was going and, even though a recent reality check has kept this band from doing anything for about five years, their presence is still felt in the underground of thrash metal today. Revocation, Black Fast and Cryptic Shift all owe a lot to Vektor.