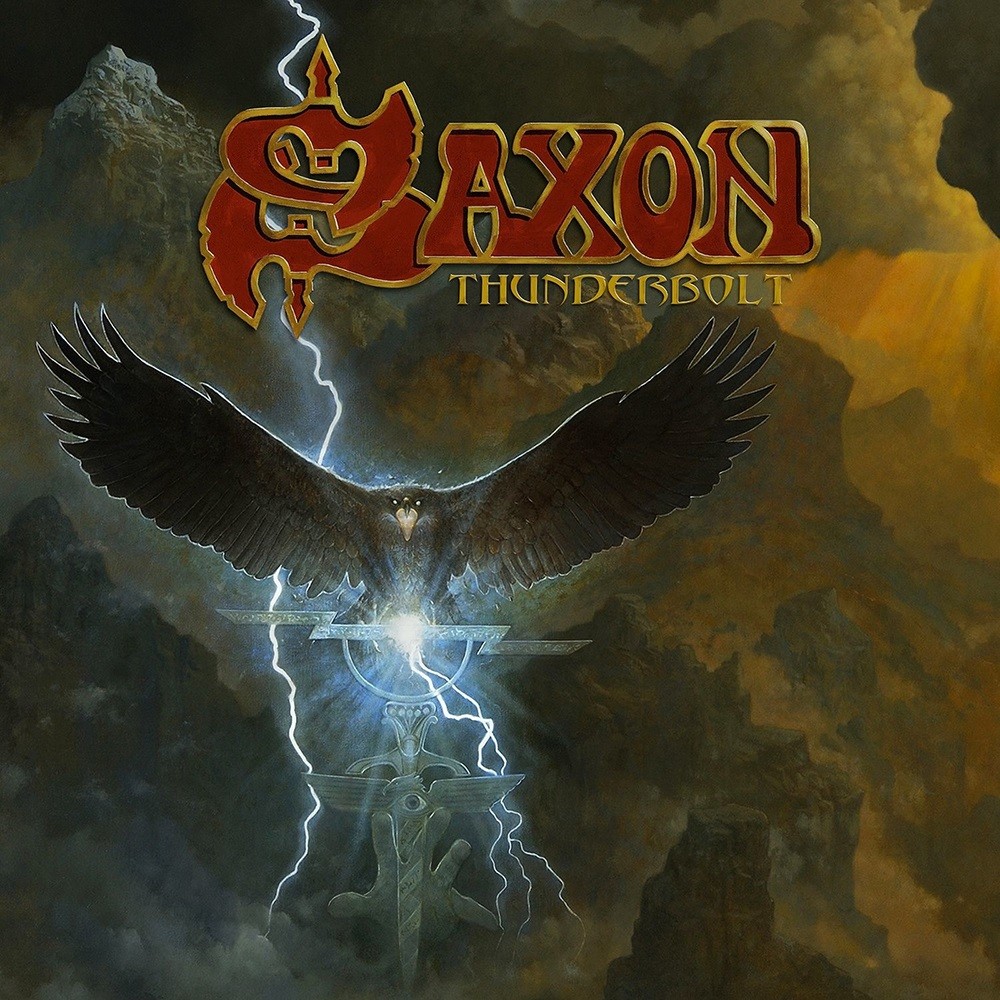 As mentioned elsewhere on here, Saxon hold a particular place of nostalgia in my heart for being the first band I ever played (but didn't own at the time) on vinyl.  I am almost duty-bound to check out most of what they put out even though it usually means some level of disappointment on some of their modern output.  However, like pretty much everyone else who has reviewed this so far I was caught off-guard by how good Thunderbolt is.  It sounds like a band that are younger than he actual age of the participants yet at the same time exudes a level of confidence that only comes with years of experience.

The main things about this album are the consistency of the energy levels and quality of the tracks on offer.  Riffs race across the record as the rhythm section maintains a pace of bash and rumble that allows for a bit of flair from the strings; the lead work being of particular note here.  Quinn and Scarratt are on fire here and Glockler sounds equally imperious on the drum kit.  Biff's trademark nasal vocals are distinct and almost haughty on the symphonic majesty of Nosferatu (my album highlight) and yet still have that down-to-earth twang and inflection to certain words that sound like a northerner trying to sound more eloquent than their accent permits.

I will not pretend to love all of the album, They Played Rock And Roll does not work for me as a tribute.  Not that I expect lyrical genius in all honesty but the lyrics here sound naive and clumsy with the Lemmy excerpt not really ringing as authentic and nostalgic as perhaps intended.  But you cannot deny the rampant battering of Predator even though the vocal effects get a little OTT for my liking, but where the majority of the quibbles arise on this record there usually is something of a much better quality not too far away.

Put Thunderbolt on for anyone just getting into heavy metal and they will lap it up.  At the same time it is fully rounded enough of an album to please the more established metalhead and even raise a few eyebrows along the way.

This is the first Saxon album I've listened to released after 1984 and I went into it with low expectations, expecting nothing more than a rehash of old ideas and a band into it's fifth decade of existence going through the motions because they don't know what else to do. Man, was I wrong because Thunderbolt actually kicks ass as seriously as anything the Yorkshiremen have ever put out. The band haven't stood still in the intervening years since last I encountered them, their sound has evolved in a more power metal-inspired direction and it really suits them. Their knack for writing anthemic songs has been reinforced with steel-edged metal for a heavier and, dare I say, more energetic sound. Sure, they still sound like the old Saxon at times - They Played Rock and Roll is reminiscent in many ways of The Bands Played On, but this is a more "metal-sounding" Saxon to be sure.

Talking of They Played Rock and Roll, I've got to confess to becoming a little bit emotional on hearing it the first time. As I've said before I was a HUGE Motörhead fan and I fondly remember the 1979 Bomber tour with Saxon supporting Lemmy, Eddie and Philthy. I attended that gig at our local venue with a number of fellow metalhead mates, a couple of who are now gone. We all had a fantastic night and the track kind of bought back memories of long-gone simpler times when all we had to worry about was how to get the money for gigs, booze and weed and fuck everything else.

I think the most surprising thing about Thunderbolt is how great Biff Byford's voice still sounds. The guy is seventy years old now and here he sounds better than he ever has. Studio jiggerypokery can only cover so many cracks, so the guy as obviously still got the pipes to deliver an impressive performance. Musically, Paul Quinn and second guitarist Doug Scarratt deliver some amazing riffs and the greatest adrenaline-fuelled solos Saxon have ever delivered are fired off with deadly precision. The production job is superb, with crystal clarity that certainly does the album no harm at all and brings out the best in all the band members.

Tracks such as Thunderbolt, A Wizard's Tale, They Played Rock and Roll and my new favourite Saxon track The Secret of Flight are as good as anything I have heard from the band previously and this is seriously challenging Wheels of Steel as my favourite Saxon album. Respect to such a veteran outfit for not resting on their laurels and still being able to go toe to toe with the younger bucks and not be left wanting. Colour me impressed!

Could be my age here, but I honestly don't get much of the appeal to NWOBHM. We have bands like Iron Maiden, Motorhead, and of course, Saxon dominating the popularity of metal in the 80s, yet the less overrated American power metal scene is hidden under our noses. Still this is a great try to check out what the Brits have made...

British metal legends Saxon created a pretty great piece of work to show they're not d*cks f***ing around for commercial success, which I've heard can pay off sometimes and other times don't. They can go as slow as Danzig and as speedy as thrash while staying in their classic heavy metal reign. The variable tempo and balance of melody and slight aggression continues in the less travelled roads of Thunderbolt!

The album starts with the unnecessary intro track "Olympus Rising". The title track makes up for that with their signature sound of compact power. The heavier "The Secret Of Flight" works greatly as well. Then we have the darker symphonic ambitions of "Nosferatu (The Vampire's Waltz)". This haunting power metal waltz continues the astounding vocals of Biff Byford and memorable guitar leads.

Some songs might make you wanna call this album "Thunderfart" (lol), like "They Played Rock and Roll", a poor attempt to tribute to Motorhead and their passed members. See, that's another problem with 70s British metal; it sounds closer to rock and roll, and that's the style Motorhead insist they have (...right). References to that band's classic songs also appear too obvious, and their guitar imitation-flattery is weak. But I say "Predator" hammers away that sh*tter with an amazing crusher that has Biff singing along with Amon Amarth's Johan Hegg growling. Annihilator-like dark riffs with harmonized vocals spread around. The slow majesty of "Sons of Odin" has a Manowar-Sabbath blend with powerful bass, simple riffs, and vocal emotion to work well live.

"Sniper" is the heaviest track here, sounding slightly heavier than Judas Priest and making sure your hand stays clenched into a fist. Another melodic headbanger "A Wizard's Tale" continues the hymn feeling they've had for so long. "Speed Merchants" has a faster vein of speed metal with riffs closer to the Canadian thrash scene of the earlier Annihilator and Razor, sticking to the song title well. The vocals and riffing are what many metalheads should here! However, dipping slightly is the closing track "Roadies' Song" with less inspired guitar work with staying distinct. That doesn't quite reach the incredible metal strength of other songs, but it stays pure to the sound.

Maybe later on, if I ever feel up to checking out more NWOBHM, I can try one of their earlier albums, but for now the stylistic Thunderbolt is what I'm sticking around for. This band can still stay consistent and awake in their 22nd album, and I believe many other Saxon fans would like it more than I do and stay faithful....

This one has really surprised me. I wasn't expecting all that much going into it to be honest. I've had a very long relationship with Saxon after having first experiencing them through 1981's "Denim & Leather" album back in the late 80's & then exploring the remainder of their classic trio of 1980-81 records. It wasn't until Ben & I conducted the Metal Academy podcast three or four years ago that I took a focused look at their self-titled debut as well as the three records that immediately followed their classic period. The debut was the only one of Saxon's first seven records that I didn't have time for with 1983's "Power & the Glory" surprisingly becoming my personal favourite, closely followed by their 1982 live album "The Eagle Has Landed: Live" & 1980's legendary "Strong Arm Of The Law" record. Strangely, I've never gotten around to giving a single post-1985 Saxon release a chance until now however "Thunderbolt" has unceremoniously turned things on their head as I actually think it may be my new favourite Saxon release.

"Thunderbolt" is certainly the most metal Saxon release I've heard to date. In fact, it's a seriously metal record in general which was always going to be a feather in its cap with someone like myself. The AC/DC & Van Halen worship that was so prevalent on Saxon's 80's material is nowhere to be found while the Judas Priest influence has been beefed out significantly & is more focused on Priest's post-1970's material now. Bif Byford's vocals are surprisingly as strong as they've ever been & are a real highlight, as is the stunning lead guitar work of the ever reliable Paul Quinn & new kid on the block (well he's been there since 1995 but I've never heard him Saxon before) Doug Scarratt. There are a truckload of great riffs included & they're accentuated by a splendidly chunky production job that sees this release completely shunning any references to the NWOBHM. In fact, if this record came out of the USA then you'd be seeing it being labelled as US power metal, such is the weight of its riffage.

The tracklisting is impressively consistent with only the lacklustre & lethargic chorus of "Speed Merchants" failing to keep me entertained. The album opens with a beautifully executed & suitably imposing intro piece called "Olympus Rising" that sets the tone for the album nicely. Then you'll find yourself thrust into a world that's simply full to the brim with metal pedigree. The anthemic album high point "The Secret Of Flight" is as addictive as anything Saxon have done in their career while the dark majesty of "Nosferatu (The Vampires Waltz)" captured me from the word go. I'm not sure I really need the raw version of that track tacked onto the end of the album though. It may not include the synthesizers of the original version however it doesn't really add anything to my life. The less impressive tracks are generally those that take more of an old school approach that borders on speed metal. These are still fairly fun inclusions but are certainly less substantial than the more ambitious & noticeably meatier mid-paced material. On the other hand though, Saxon records have traditionally included the odd commercial dud & thankfully you'll find none of those on this occasion so it's hard to complain much.

I have to admit that I'm well impressed with just how relevant Saxon still sounded after 42 years of existence & that fact that they've managed to achieve a sound that's better suited to my personal tastes than their classic material was is a testament to that. I've always liked Saxon but I rarely loved them. It's nice to see a group of old codgers that aren't afraid to get with the times & are still so clearly influenced by great metal music.