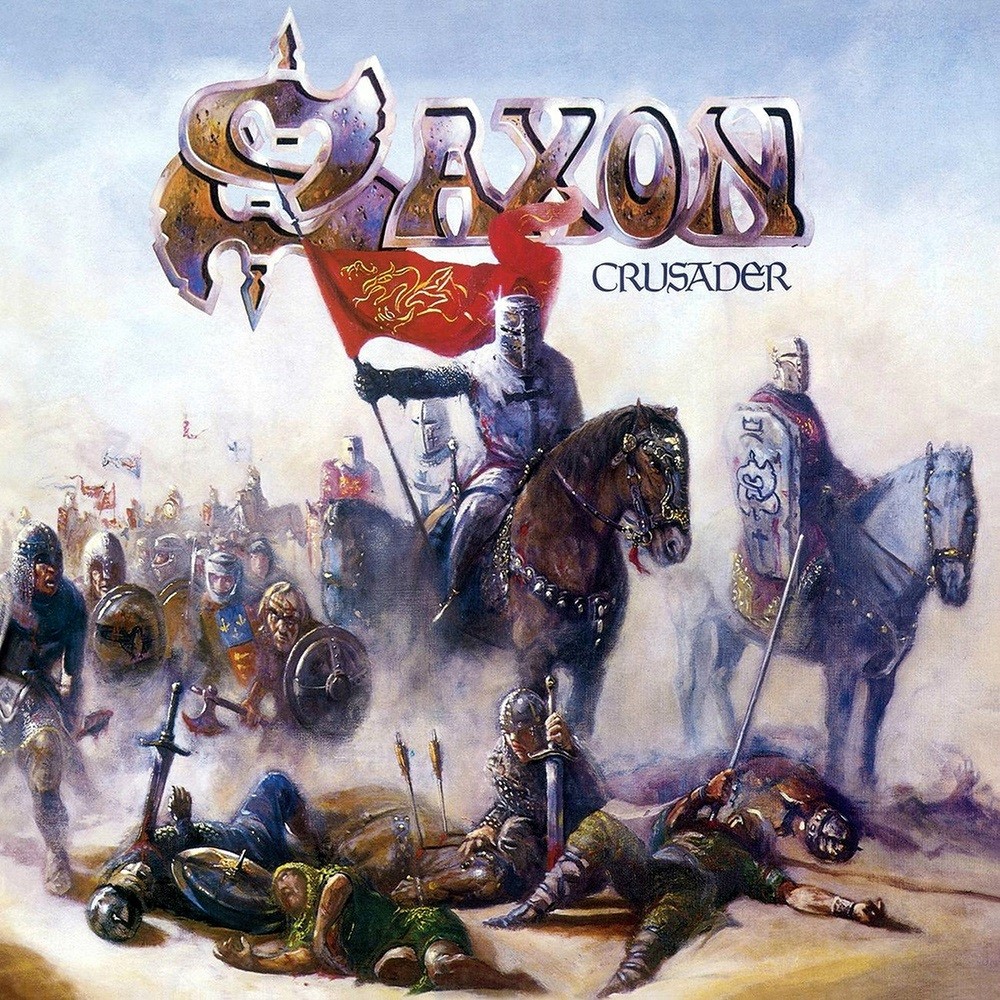 Saxon's importance in the world of metal is often overlooked.  As I mentioned before elsewhere on MA, their first four albums contain some of the most consistent material of the late 70's/early 80's and even Power & The Glory (although by no means terrible) holds a special place in my heart in terms of a nostalgic piece as opposed to the overall quality of the record.  Enter Crusader which on paper showed so much promise but unfortunately served little purpose other than to confirm the golden run of albums was well and truly over and the commercial appeal of the band was at the forefront of proceedings, sacrificing quality song writing in the process.

Now let's be clear here, Saxon aren't epic song writers.  A lot of the themes of their songs rest heavily on stereotypical subjects such as motorbikes, girls and partying.  This simplicity in the songs was completely their niche and I loved them for it because the quality of the musicianship carried the basic themes perfectly.  Once this dipped in quality then the holes where impossible not to fall through, and unfortunately Crusader is full of holes (craters arguably).

It is not to say that moments such as the sassy pace and enchanting lead work of just Let Me Rock aren't good enough, they are just not frequent enough.  When balanced with the awful A Little Bit of What You Fancy you have to wonder if the same band wrote the whole album.  The whole performance feels restrained even on the better moments of the record and there's a constant feel of each band member wearing a neon flashing light on their backs, blazing "Play Us On The Radio" in striking red font for all to see.  As a result there's a feel of a complete lack of passion in the record and a sense that the old NWOBHM vibes just got dumped in favour of friendly hard rock for the masses.

Layered backing vocals milk harmonies for all they are worth and do nothing to actually better the output as Byford is probably the only consistent performer on here and certainly the only one recognisable/comparable to previous output.  Not horrible, but a bloated album that craves attention more than actually earning any.

The trio of albums Saxon released in 1980 & 1981 marked the pinnacle of their career & 1983’s underrated “Power & the Glory” record saw the fanfare dropping off a little due to the early hints of a more commercially focused sound that was consciously constructed to line up better with the expectations of US commercial rock radio. Personally, I didn’t think it was such a bad thing. I mean Saxon had always had just as much hard rock in their sound as they did heavy metal & the song-writing was still very strong. But unfortunately for the band the glossier presentation & sugary backing vocals tended to work against them by giving their sound a slightly poppier edge that tended to alienate a reasonable portion of the metal underground. And this brings us to Saxon’s sixth studio album in 1984’s “Crusader” which sees the band continuing on in a similar vein to “Power & the Glory” only with even less of the metal that had carried it’s predecessor.

For all intents & purposes “Crusader” looks & sounds like it will be a return to a truer form of heavy metal early on. The artwork shows a scene from an epic battle with the victors standing over the bodies of their enemies & holding aloft their flag. The first two tracks also push this theme with the short introductory piece “The Crusader Prelude” setting the scene with the sounds of battle & the particularly strong & heavy title track doing a stellar job at recreating the lumbering slower tempo gallop of Black Sabbath’s “Heaven & Hell” & Dio’s “Holy Diver”. I can only imagine that long-time fans who had been disappointed with “Power & the Glory” would have been feeling very good about the world after their first listen to those two tracks. But then things change very quickly & they never really recover as the rest of the tracklisting is predominantly focused on Van Halen style hard rock with a strong emphasis on radio play. In fact, the only other track that pushes up into legitimate heavy metal territory is the cover version of The Sweet’s “Set Me Free” & I can’t say that I enjoy it much. But having said that, please don’t think that I’m shit-canning the rest of the material because I actually quite enjoy “Crusader”. For all of the contrived commercialism on display it’s hard to deny that Saxon are a damn fine group of musicians & song-writers & I struggle not to enjoy a good half of the material here.

When you read track titles like “Just Let Me Rock”, Bad Boys (Like To Rock ‘n’ Roll)” & “Rock City” I guess we shouldn’t really have been surprised by what we were hearing coming from the speakers but to be fair Saxon always had these sort of songs. It’s just that they make up a greater proportion of the album here. And of course, there are a couple of cheesier ballads included too but they’re pretty well done & they represent somewhat of a guilty pleasure for me as I can’t resist singing along to their choruses. For all of Saxon’s efforts, the production job isn’t as glossy & clean as your typical US glam metal fodder & maintains some of that signature NWOBHM grit. It’s hard to say whether that was always the intention or not. I’d probably suggest not but the guitar solos of Graham Oliver & Paul Quinn sound blazing throughout & that’s a real drawcard for me. This is amongst the pairs very best performances in that respect while front man Bif Byford was simply born to be a rock star; at least from a purely sonic point of view. So ultimately, I find “Crusader” to offer more than it’s given credit for. Sure it’s clearly the weakest Saxon album since their 1979 self-titled debut & the Van Halen worship is blaringly obvious at times but that doesn’t mean that it doesn’t offer anything for the more discerning & patient metal fans out there. I’d suggest giving it a listen with an open mind & drawing you own opinion.