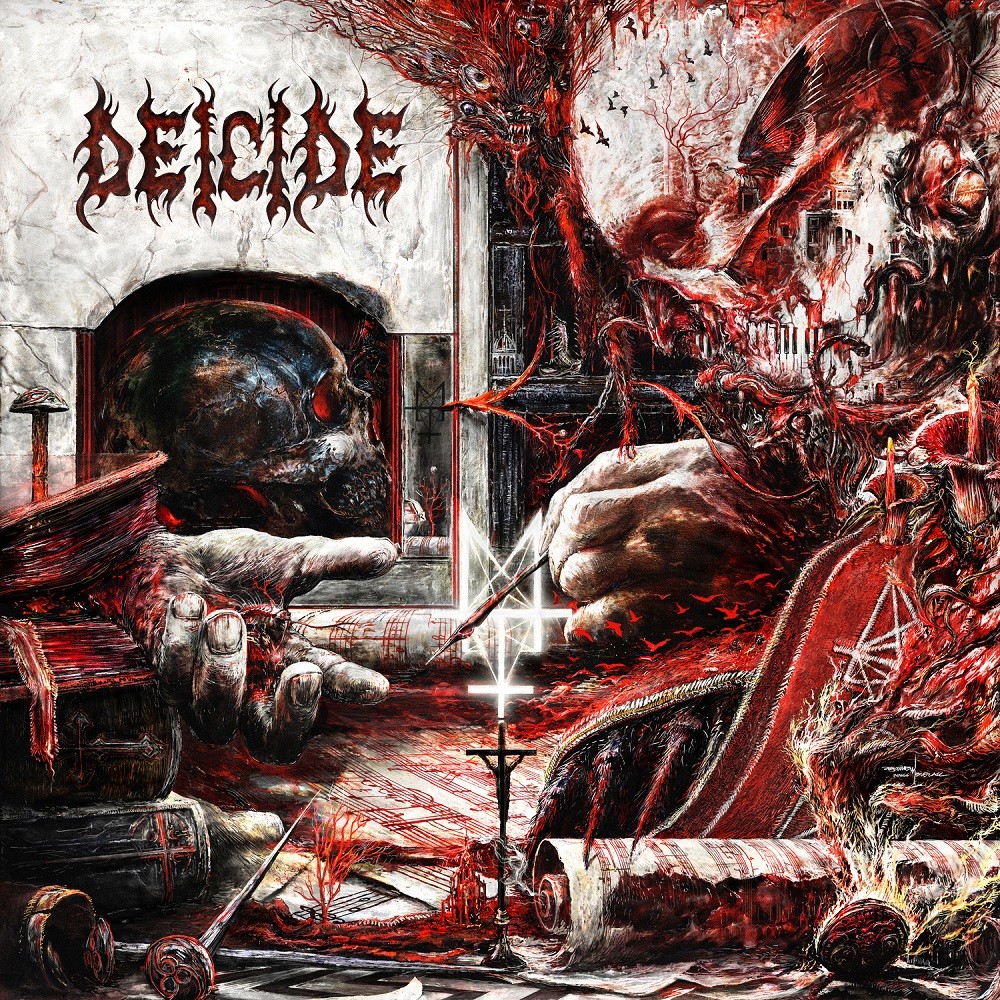 Glen Benton is 51. Fuck I feel old now too. Deicide are 30 years old (32 if we count the Amon era). Album number 12 from the fathers of Florida death metal is a strong effort considering yet another change of personnel has occurred. It is bye-bye Jack Owen, hello Mark English of Monstrosity fame taking up guitar duties and ironically I like "Overtures of Blasphemy " a lot more than Monstrosity's effort this year.

Whilst it can never make the "beast of a DM record" title I would give to the debut or"Legion" for example, "Overtures..." is entertaining. Whether it is the melo-death passages that litter the streets and alleyways of this record or the more familiar sacrilegious blasting fury of Deicide at their (old) best, there's plenty to balance the experience over these 12 tracks. Take "Seal The Tomb" for example, it goes immediately for the jugular, relentlessly chugging riffs alongside Benton's usual demented growls only to be tempered by menacing and interesting leads and sonics that carry the song along well. Listen once to this track and it is in your head for literally days after.

Then there's the vehemence of the lyrics of "Compliments of Christ" were you can feel the spittle from Glen's lips splattering your ears as he spews forth the vitriol he is best known for. "Anointed in Blood" opens like a lead jam session recorded mid flow before developing into a hellish gallop of fiery hooves, again perfectly completed by some well placed and well timed leads.

This is were Morbid Angel went wrong with "Kingdoms..." safe DM with little if any attention paid to the sonic wizardry of their sound. Take a leaf out of Glen's book Trey!

It is clear that this is no nonsense DM that  still has enough equal measure of extremity and assured and unapologetic attitude to hold it's own against most of the DM records released this year. It is not perfect by any means. I lose it on more than one occasion if I am honest ("Crucified Soul of Salvation" in particular hits my 'standby' button really nicely) and it is a couple of tracks too long making for an almost excessive feel to the running time. Whilst it is a well paced record there's definitely some "filler" present. But for any turkeys in here there is still thankfully the brilliance of tracks like "Consumed by Hatred" to snap you back to attention. "Flesh, Power, Dominion" is one of the strongest things Deicide have ever put to tape btw.