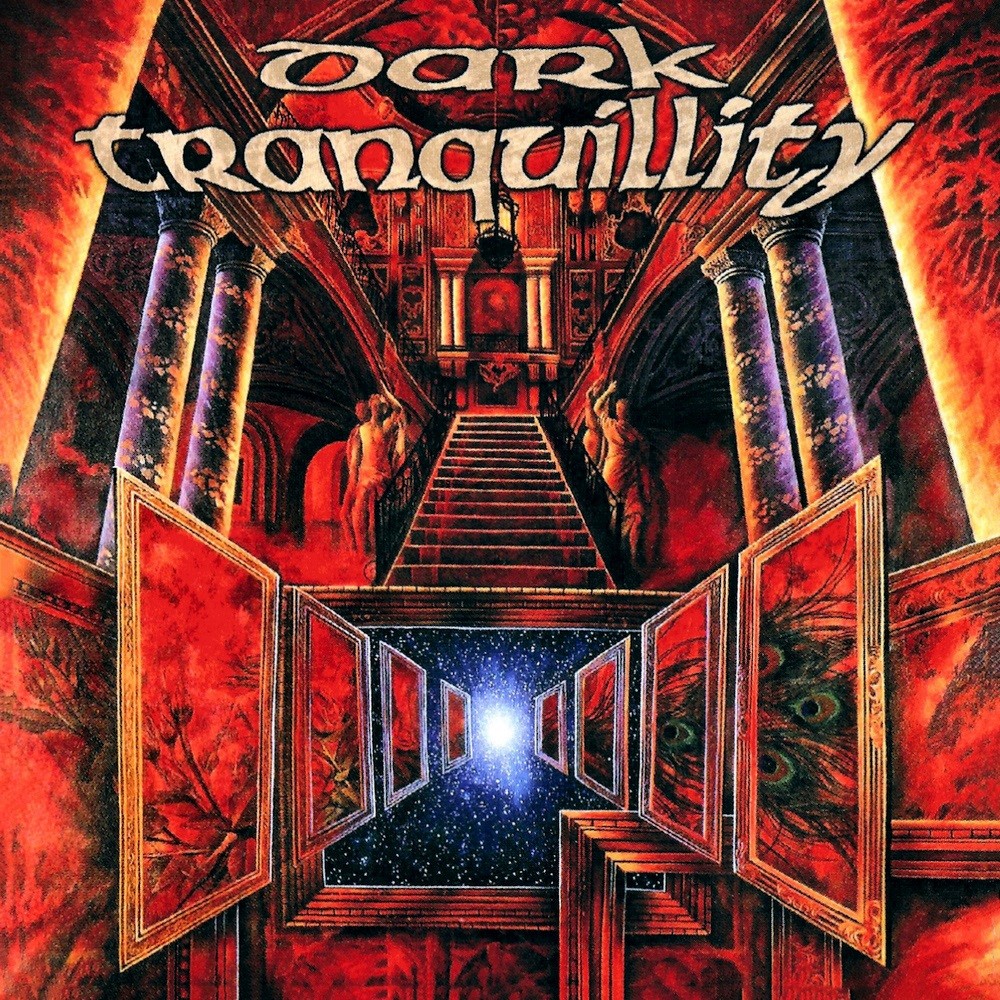 Right up there with the best melodic death metal albums and Dark Tranquillity's finest.

Dark Tranquillity were one of the first bands to produce melodic death metal and they’ve been going strong ever since. They were certainly pioneering, not to mention brave, when they decided that what the normally brooding death metal genre really needed was some sweet melodies. But it proved a huge success almost immediately and has inspired some of the most commercially successful bands in extreme metal. Their style has twisted and turned over the years, but it has never ventured too far away from the subgenre they helped create. They don’t try to be overly brutal or morbid. They don’t try to be overly technical or experimental. They simply try to create entertaining, good music and rarely have they failed to do so in over 15 years. It could be said that they’re a safe band these days, but then it’s nice to have an outfit that can always be relied upon to produce the goods.

The Gallery was the first great Dark Tranquillity album. Their debut Skydancer wasn’t bad by any means, but it displayed a band still finding their feet. It was certainly a good effort considering how different it was to all death metal preceding it, but The Gallery was where they really hit their straps. This album has numerous classic tracks that will have you grinning madly in no time. The sound is big and clear which is perfect for their style and gives each musician plenty of room to show their wares. There is a stack of variety contained within the 11 tracks with the velocity ranging from almost ballad like tunes through to ripping death metal. Dark Tranquillity are just as likely to inject a piano interlude or female vocals as they are to launch into a shredding riff complete with blast beats. It makes for an always interesting and at times surprising experience that rewards multiple listens.

If the album has a flaw, it’s that the second half falls away after a near perfect start. By the time Punish My Heaven, Edenspring, The Dividing Line and The Gallery have blessed my eardrums I’m feeling like this album deserves nothing short of full marks. But then the last few tracks don’t manage to keep this high quality going in my opinion. There aren’t really any particularly bad moments, but The Emptiness From Which I Fed and …of Melancholy Burning are just not quite there on the brilliance level. But even with this downside, The Gallery is a damn fine album that should sit very snugly within any melodic death metal fans collection. I know the genre receives a lot of flak these days due to an infinite number of crappy clones, but I’d like to think that bands like Dark Tranquillity should be exempt from such criticism. The lack of quality in other bands can hardly be their fault now, can it?!

The first classic album by probably the first Melodic Death Metal band, The Gallery's release in 1995 marked the coming-of-age of a sound that had been brewing in the Swedish underground since the early 90s.

A flurry of demos and EPs from bands such as Eucharist, At the Gates, and Unanimated, in addition to Dark Tranquillity, had established a primordial version of the "Gothenburg sound"... taking the raw tremolo riff-fest of Death Metal and infusing just a dash of melody and dynamic variation, with eyes towards gothic and philosophical themes rather than horror. Many bands have since achieved success by taking that formula in various directions in the decades since, but in my opinion this release marked the moment Melodic Death Metal truly became something separate and distinct.

Building upon influences hinted at in their earlier works, Dark Tranquillity intelligently took everything differentiating them from standard Death Metal, and took them even further. The compositions became even more progressive and ambitious in every way. More intricate and technical in the fast guitar-driven parts,  juxtaposed against increased presence of simple piano, acoustic guitar, tasteful bass. More emotional, varied and understandable vocal delivery to complement the more cryptic and, frankly, epic lyrics. More complex. More melodic. And more intellectual than anything this burgeoning scene had yet produced. In short, Dark Tranquillity finally became everything that the extremity-focused Death Metal of this era wasn't. Yet, somehow, it was still sonically "Death Metal" at its bleeding heart.

People rapidly caught on to the appeal of this juxtaposition. Remarkably, despite the explosive proliferation of the Gothenburg sound and Melodic Death Metal as a whole in the decades since, The Gallery remains notable not only for its pioneering influence but also for its sheer musical quality. Still to this day, The Gallery remains one of the gold-standards and essential listens of Extreme, Dark, and Melodic Metal alike.

Now, it's not quite a perfect album in my view, at least not from a track-by-track perspective, which is how I rate albums. Although every song is very enjoyable and captures that early-DT splendor, only about half of them ever caught on with me as regular listens in my rotation. Those songs, however (see below), are all-time favorites that I will listen to 'til I die. I just fucking love the band's sound at this moment in time and it flows so well and consistently across the album. There's a certain adventurous charm... a certain youthful passion... an emotional gravity to these songs that would never quite return in the same way after The Mind's I or Projector as the band aged and modernized. This isn't a shot at Dark Tranquillity's latter discography, which I enjoy, but they were just on something different in the 90s.

I'm just thankful I live in a universe where Mikael Stanne joined up with these guys and recorded this treat for the years. His pained, dramatic vocals and poetic lyrics are just so perfect for the sombre, bittersweet melodies Dark Tranquillity specialize in. This, right here, is the epitome of what I like to call "Prime MeloDeath".

All the classics often have at least one reviewer who are against it and think the albums is overrated. But this is almost never poorly rated! Forget the haters! The Gallery is the best Dark Tranquillity album and a true start of Gothenburg melodeath, though Skydancer deserves a little more credit.

Pretty much every riff is epic and melodic in a perfect way. The band focuses way more on songwriting than technical guitar soloing. The two guitarists never try to imitate Yngwie Malmsteen. The vocals are at a perfect mid-range and almost every word can be heard more clearly than in Skydancer. It's hardly accessible with a few songs that scatter around progressive rhythms. Drumming is at fast aggression. This is just melodeath, there's no point in labeling this album another genre like power metal. Even though In Flames' The Jester Race and At the Gates' Slaughter of the Soul are also established as the Gothenburg pioneering albums, The Gallery is the slightly greater one of the trio. I really wish I've never abandoned this band. Don't expect Dark Tranquillity to end up in a common festival, store, or iPod. This. is. GOTHENBURG!!

"Punish My Heaven" is a great fast way to open this album with beautiful melodic guitar sounding epic and almost neo-classical. Mikael Stanne, doing lead vocals for the first time, growls his way through melancholic lyrics with a tiny bit of clean singing. "Silence and the Firmament Withdrew" is a short mid-paced song. "Edenspring" is one of the greatest songs here, having fast aggression and epic melody mixed together in one song. "The Dividing Line" is also melodic but with more progressive experimental rhythms to expect in later albums, mostly their next album The Mind's I.

The title track starts with a folk-influenced acoustic intro before heading into dramatic heaviness. Similar to a few songs from Skydancer, there's some female singing, this time with a different female vocalist. "The One Brooding Warning" is once again faster and progressive, having a nice guitar melody. "Midway Through Infinity" gets into a chaotic start with blast beats and melodies, a clear definition of melodeath! Another one of the best songs here, but it is followed by something more awesome... "Lethe" is probably one of the most beautiful metal songs I've ever heard and the perfect defining track of this album. After a long acoustic/bass intro, the guitar and the rest of the instrumentation join in for some epic melodic neo-classical riff-wrath, as Stanne growls passionate lyrics of mythological fantasy, with the female vocalist joining in for one verse and a scream. In the end, the song fades back to bass, and just when you thought it was over, SURPRISE!! One brief heavy encore!

"The Emptiness From Which I Fed" is another fast track that serves as one more song before the epic grand finale. "Mine is the Grandeur of Melancholy Burning" is basically an almost 9-minute epic, but its intro "Mine is the Grandeur" is separated into its own track. Consisting of just a powerful duel of acoustic guitar and tympani, you imagine yourself in a medieval scenario where you walk through a grassy field at sunset. It segues into Of Melancholy Burning, starting with mid-paced riff power and soon, more of Stanne's powerful growls. Continuing that medieval scenario, you, the knight, are on a mission to save a princess who was sentenced to death for a crime she didn't commit. As you enter the tall castle tower, you walk up the long spiral stairs, slaying the king's guards along the way. In the middle of the song, the melodic riff-wrath gets faster and the female vocals come in once again. You finally reach the king's throne room where the princess is about to be shoved out the window as her death sentence. Despite her pleads for you to save her, it's too late. The king shoves her out the high window and, as the female vocalist does her final scream, the princess falls off the really tall tower, plummeting to her death. You feel so bad about the failed mission and mourn the loss of the princess. During the heavy climax with the "Mine is the Grandeur" riff, in your rage, you engage in a one-on-one sword battle with the king, but the king overpowers you and impales you through the stomach. In the brief beautiful acoustic outro, the king leaves his throne room, and you're left there bleeding to death. To be continued...

The re-release comes with 5 bonus covers, but I don't feel like talking about them in this review. Anyway, this album would surely have listeners craving for more and listening to this album so many times without getting bored. It's NOT totally the greatest album in the world but it's pretty close. It is still my favorite Dark Tranquillity album and a true pioneering force in Gothenburg melodeath. I would definitely recommend this for any fan of epic aggressive melodeath. Please, just buy it!