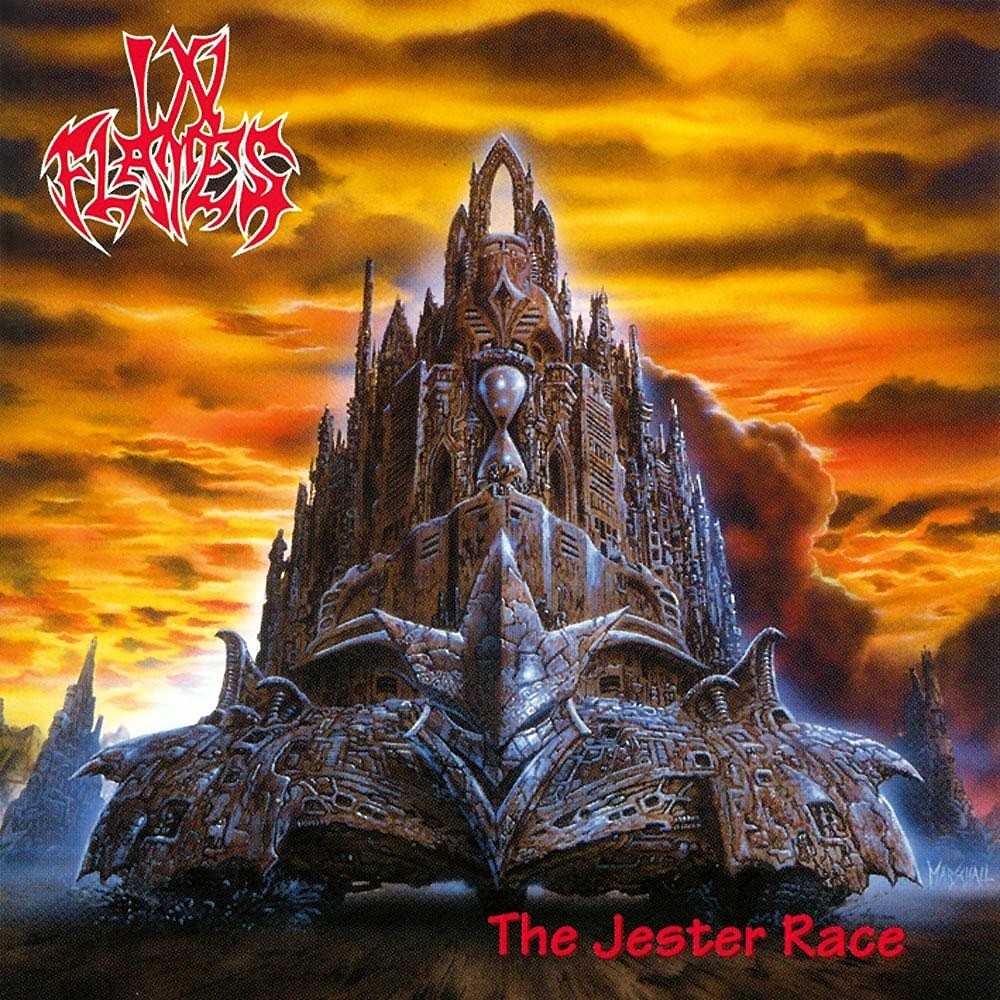 An enjoyable melodic death metal album, despite what others might tell you.

There are very few bands in metal that can cause as much controversy and differing viewpoints than In Flames. For every individual out there, that considers albums such as The Jester Race to be the holy grail of metal, there is another that sticks needles in Anders Fridén dolls nightly in an attempt to end the agony. The reasons for this war are many, but the main one that comes to mind is that In Flames are popular. So popular in fact, that the band has sold well over 2 million albums, which is far more than anyone even remotely associated with death metal is apparently allowed to sell before they get labels such as “sell out” and “mainstream crap”. I made a pact with myself a long time ago that I would judge every album on its merits rather than its popularity and while that may not bode well for this Swedish outfits later recordings, there’s no doubt in my mind that The Jester Race is both relevant and pretty damn good.

The Jester Race was the first In Flames album to contain vocalist Anders Fridén and drummer Björn Gelotte, yet while those two members certainly made an impact on the result, the band had well and truly found their sound on 1995’s Subterranean EP. I thought the band showed great improvement over their sketchy debut full length on that EP and had cut some of the experimentation that hadn’t quite worked on their previous effort. The same catchy melodic riffs can be heard throughout every track here, along with easy on the ear leads and nice injections of acoustics at regular intervals. It’s all harmless stuff which is what riles up so many death metal fans so much, but it’s also highly entertaining and well…fun! The band can still crank things up with some heavy riff / intense drumming sections on tracks like Dead Eternity, but you always know that the aggression is short lived, with another uplifting melody just around the corner. It’s the type of album I can listen to when I’m just not particularly in the mood for Cryptopsy or Nile like intensity, yet still wish for something undeniably metal.

While it must be apparent that I find a lot to enjoy on The Jester Race, I’m still not convinced that it deserves to be placed among the top tier of metal albums. The blatant Iron Maiden worshipping instrumental Wayfaerer does push things too far with some very weak riffs not to mention truly awful synthesizer leads that have me reaching for the skip button faster than you can say “why the f#$% would you do that”! I also think the title track drops the ball a bit and cringe every time Anders hollers “here we go” like an English football fan repeatedly. Speaking of Anders, I don’t mind his vocal style at all, but it must be said that he would get a lot better with experience. There’s no denying though that tracks like Moonshield, Dead Eternity and December Flower are some of the best the band ever produced, and good examples of the Gothenburg sound. I still prefer Slaughter of the Soul and numerous Dark Tranquillity albums far more than anything In Flames have produced, but credit where credit’s due. The Jester Race is hugely influential and for the most part, an enjoyable melodic death metal album.

So here's a turn up for the new year, a melodeath album that Vinny actually likes!  "Where is the real MacabreEternal?" I hear you cry, "We demand his safe return immediately!"

In terms of the Gothenburg scene At The Gate's The Red In The Sky Is Ours was my pick of the scene, with its demented vocal style being of particular note for me.  In Flames somehow passed me by until this past week and after a couple of spins of The Jester Race I am sold on this particular slab of melodeath.

What this record does so well is balance the melodic elements so very well with the death metal parts.  Whereas the Dark Tranquillity style of melodeath feels awash with keys and polished riffs, at this stage of their career In Flames has a more core death metal feel to proceedings.  It is still very melodic but it is integrated so well into the mix that it carries so much better.

There's a variety of influences present here too, ranging from progressive sounding follies to acoustic musings as well as incorporating flagrant rock riffs to boot.  The record is written with a skill that often belies a band just three years into their existence at the time.  For a bunch of guys in their early to mid-twenties there's a real maturity to proceedings over the ten tracks on display.

I have started 2020 off with a neat new discovery (albeit a 24 year old album)!  I clocked the 2014 digipak, The Jester Race + Black Ash Inheritance with bonus tracks and live tracks also.  Worth a punt.

Long Long Ago, In Flames were not just another alt. metal band, but rather a titanic pioneering force in the realm of Melodic Death Metal. With this seminal release, they combined the aggression and atmosphere of the extreme metal underground with the accessibility of 80s melodic heavy metal more seamlessly than any band before them. Some scorned the band for "polluting" death metal with their unrivaled melodic sensibility, but what they started on this album could not be stopped.

Even In Flames' most ardent detractors cannot deny that the band had a knack for b e a u t i f u l heartfelt melodies. This shows up in the acoustic passages (Moonshield, Jester's Dance), the guitar leads & riffs (Dead Eternity, December Flower), and even the solos (Wayfaerer, Dead God In Me). During In Flames' five-year heyday (Subterranean through Whoracle), literally every guitar melody they crafted was solid gold. And even though Anders Friden probably isn't as talented as Subterranean vocalist Henke Forss (let alone Mikael Stanne), he sounds better on this album than he ever has since (he actually has a low register with some legitimately powerful death growls here!). Jesper Stromblad is one of my favorite guitarists and he is consistently great on this disc as well. The band is going at full force and you can just tell they were really enjoying writing and playing this music together. The production isn't as pristine and polished as on successor albums, which I actually count as a plus. It lends the music a sort of mystique they would lose later, though I love the next few albums as well. From "Moonshield" (one of the best album intros ever with its folky acoustic passage and how it transitions into the sorrowful melodic riffing) to the epic closer "Dead God In Me", every song here is instantly memorable and could be listed as a highlight.

The Jester Race, along with At The Gates' Slaughter of the Soul, inspired legions of imitators over the next decade and still today. But THIS album was the original - and remains a work of unique inspiration and quality.