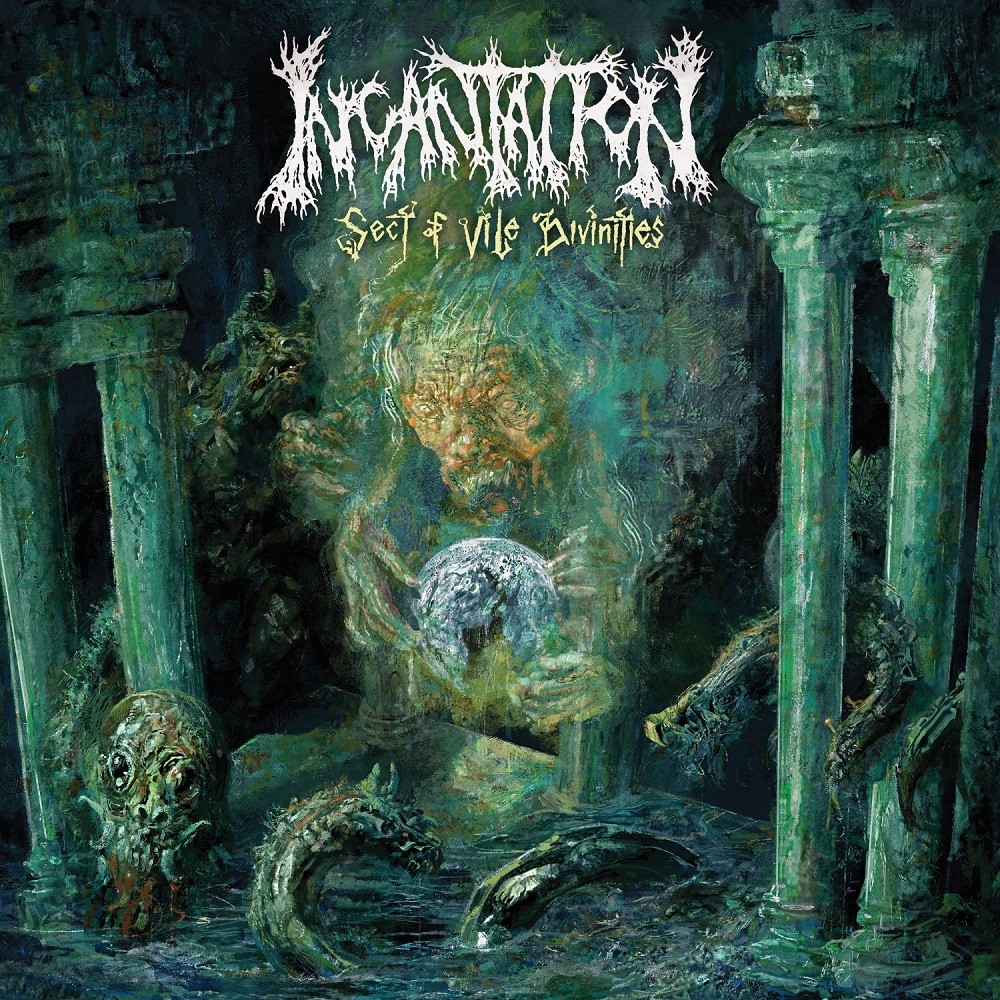 After the opening blister of Ritual Impurity (Seven of the Sky Is One), although I cannot deny that it gets the blood pumping, I feared this would be one of those breakneck death metal albums where the emphasis on battering everything into submission renders it all a blur of indistinguishable, fever-fuelled noise. Luckily after that initial onslaught, the band slow the tempo a bit and the tracks come more into focus and is a far more enjoyable prospect as a result. Second track Propitiation has an extended build-up that reminds me a bit of the intro to Seasons in the Abyss, before exploding into a cracking, throbbing chunk of malevolent death doom. The album then continues with a trade-off between those manic, pummelling, fast-tempo bursts of energy and the hulking menace of the slower-paced doomy sections. John McEntee's vocals are undimmed by time and he still produces an archetypal death growl, despite his fifty years, that many try and fail to replicate.
So, in closing I've got to say that this is a pretty impressive album for a death metal band edging thirty years in the game, showing no dimming of the fire in their belly and a damn sight better than most of their peers have managed for many a long year!

Album number twelve from arguably one of the most copied acts in death metal sounds like a band at a much younger and more energetic stage of their careers than the known history of the band would have you believe.  As John McEntee comes for his 51st year he continues stand astride the monstrous death metal machine that is Incantation, delivering another consistent if not predictable album that finds the band in their now very familiar territory yet somehow staying relevant still.

Coming into it, I had the expectation of how Sect of Vile Divinities sound and it absolutely lives up to those expectations in the main.  Things feel slightly more accessible on this outing though and the tracks seem more open and evenly paced.  I sense there is more groove to the riffs as well and a sense that a more structured approach has been taken with the songwriting.  It is by no means a reinvention of the Incantation sound but it is a more measured feeling album from my experience of the last couple of studio releases.  Some of this may be down to the lead work being handled this time by Sonny Lombardozzi (with Dismemberment's Luke Shively also being involved) but I think in the main the fact is that there can't be much more mileage left in the Incantation sound of a band that has churned out pretty much the same style for nearly thirty years.  Swanö's mix job is of the usual quality you would expect and you can hear all parts of the engine firing here but I think overall this is a much more considered album from the band.

Overall, songs are in the shorter format with no sign of the eleven and sixteen minute efforts that made elements of Vanquish in Vengeance and Dirges of Elysium so laborious to get through.  This album takes the shorter formats of Profane Nexus and condenses them that bit further to deliver stabs of quality death metal that say their piece and then get out of the way ready for the next track to deliver it's menacing messages.

I won't pretend this is death metal that is new in any way, shape or form.  You've heard this before, most definitely from the same band no doubt (despite the tweaks to the sound I mention above).  But there's still a nonchalant confidence here that sort of tells you to expect nothing else and if I am honest, I don't want anything else.  Pretty much for the same reason that I still look forwards to Cannibal Corpse releases, I know exactly what I am getting from Incantation.  I am not sat here waiting for wheels to be reinvented, I just want my death metal fix and I want it done well.  Box ticked.