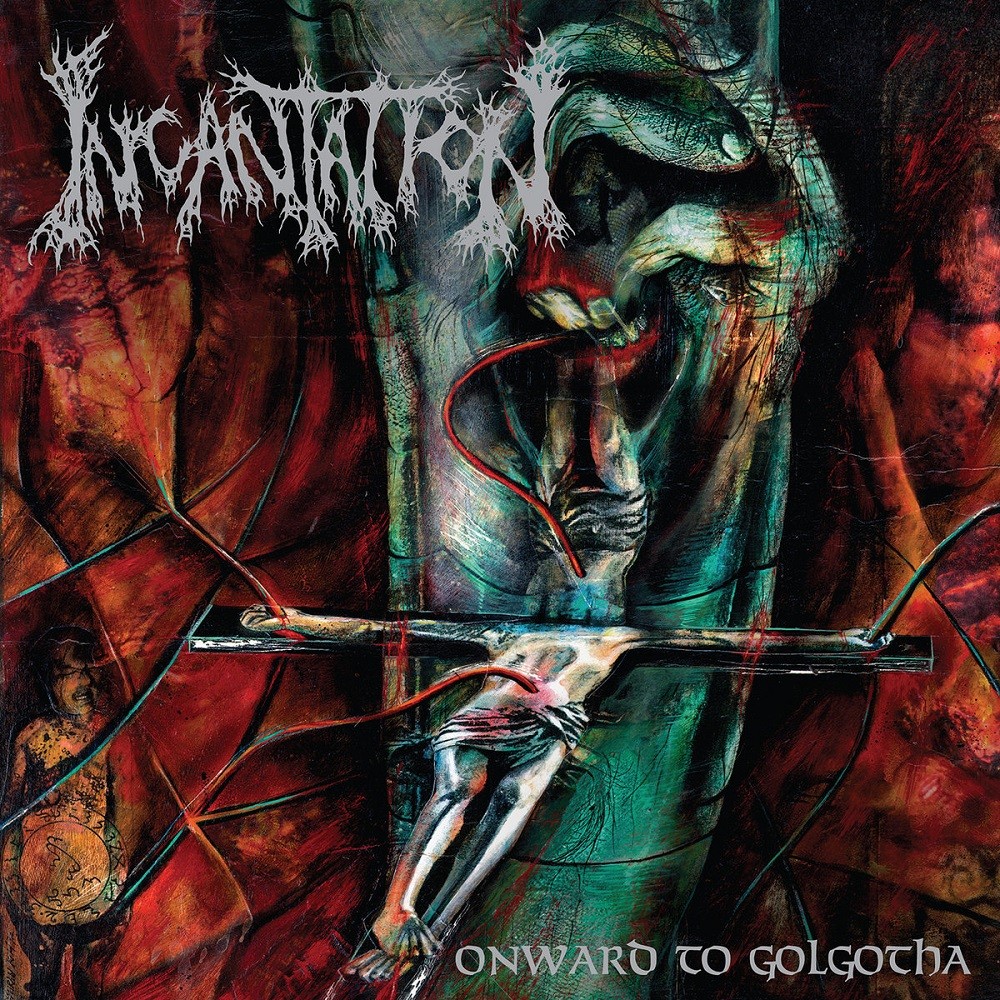 I've listened to this album several times over the past few weeks. I have to say that the first few times I did, the album just kind of passed me by without really grabbing me. That may seem strange, particularly as this is rather brutal death metal with a great, heavy production. How could an album so intense not keep my attention and allow my mind to wander? In hindsight, I think there are two answers to that question. Firstly, there is virtually nothing catchy about Onward to Golgotha. No massive hooks that you'll be humming through the day. The lyrics are indecipherable for the majority, so you won't be singing along any time soon. It's crushing, oppressive music that relies on pitch black atmosphere and low tuned, damn heavy musicianship. Secondly, I think I found something rather comforting in all this morbid filth. I've found myself pondering life and all its intricacies while Incantation give me a good sensory battering simultaneously. Maybe it's the nostalgia of a time when death metal was much more exciting. When overproduced clones hadn't all but destroyed the scene.

Anyway, I'm glad I kept at it, as Onward to Golgotha is a massive album and once given the time, will start to connect as it was intended. The band that comes to mind the most is Immolation, particularly the dark twisted riffs and extremely low death growls. But Incantation also have a doom element that shows up throughout some of the longer tracks that almost sounds like funeral doom in its oppressive nature although it never reaches that level of plodding minimalism. Tracks like Christening the Afterbirth remind me of death metal era My Dying Bride with all the guitar squeals, but Incantation is a far heavier affair than those British legends. In the end, I highly recommend this album to any old school death metal fans out there and look forward to checking out some of their other earlier albums. Highlights for me are Rotting Spiritual Embodiment, Christening the Afterbirth and Deliverance of Horrific Prophecies.

Incantation's debut album is probably one of my more under-appreciated death metal albums when looking at the real "classics" of the genre.  As Ben alluded to in his review, there's some elements of inaccessibility to contend with at first but once you get a few spins under your belt things really start to embed in the old memory banks.  It is an album that crawls and races in equal portions is how I best describe the experience.  The pace is varied but the sound is always heavy and unrelenting.

For a band just three years into their existence, Incantation manged a debut in 1992 that was the embodiment of death metal.  Oppressive, dark, unapologetic and extreme in every sense of the word, the liner notes on the CD booklet took the opportunity in the "Thank You" section to say "Thank you all.  Disciples of Blasphemy, together we forever reign in darkness, as our souls roam horizons lost, we indulge in spiritual Desire!"  If you're a death metal fan, those words invoke sufficient levels of nefarious excitement in you to be forever an advocate of Incantation from the off, lost in the allure of the darkness they conjure over the course of Onward to Golgotha.

It's straight into a frenzied pace from the second the album begins and as I say it will take some degree of concentration to follow the record over the 11 tracks.  Along the way you will get to the death/doom blend that many subsequent bands have replicated over the years (I mean Incantation must be the most copied band in the history of music) as Pillard and McEntee riff the very flesh from your bones.  The drums of Jim Roe and the bass of Ronny Deo the perfect backdrop to the soundtrack to the sound of the apocalypse.

As a foundation stone, the debut record sets out Incantation's stall perfectly.  What has followed since on subsequent releases has been consistent with the promise that the first offering showed in piles.  Incantation have always been death metal and  after twelve full-lengths, numerous EP's and live releases the band have never once strayed  away from their relentless style.