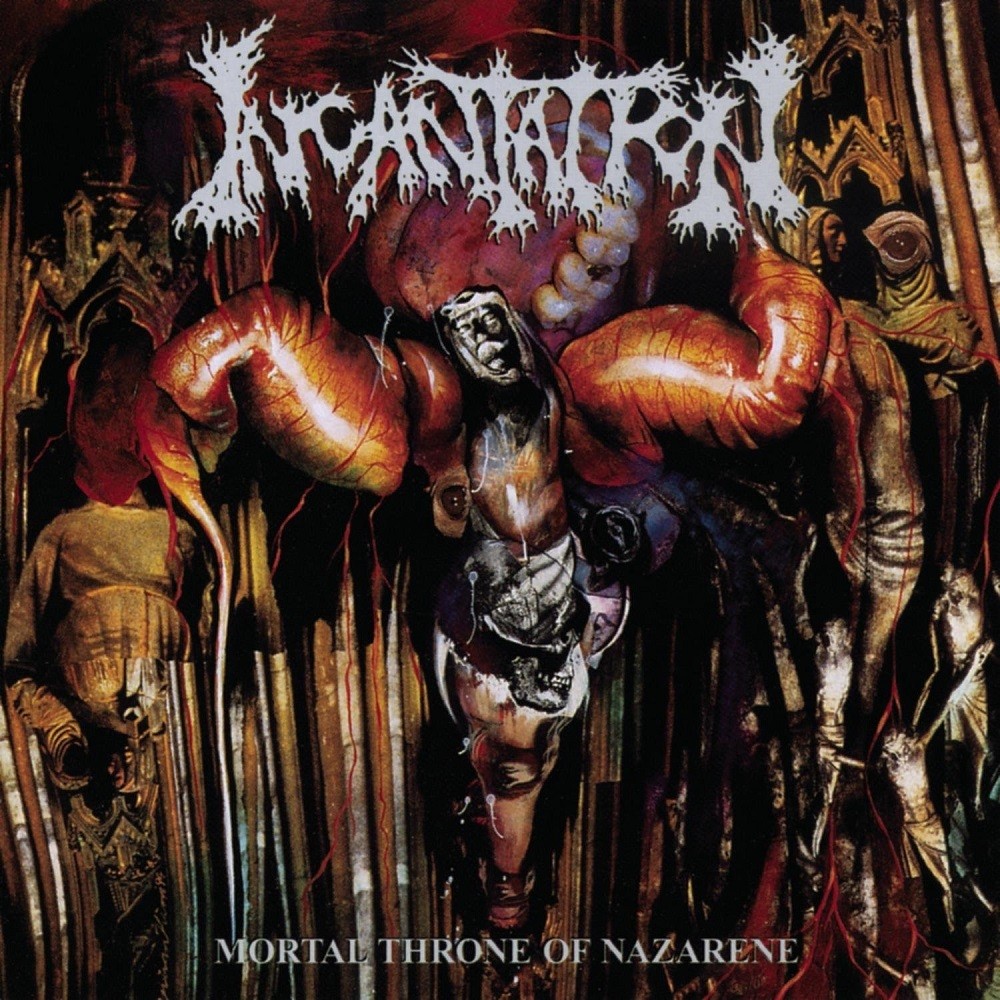 I got on the Incantation train as an unsuspecting but enthusiastic teenager when their 1992 debut album “Onward To Golgotha” entered my mail box via a US tape trader shortly after release & it made a significant impact on me. I really enjoyed its dense, murky atmosphere & deep, suffocating vocal delivery although I had to admit that the production & performances were a little looser than I was comfortable with at the time which prevented me from placing it on the pedestal that some of my death metal peers seemed to. But never fear… Incantation would return soon enough & would bring with them a similar if slightly more refined sound for 1994’s sophomore album “Mortal Throne Of Nazarene”.

Interestingly, the band’s label Relapse Records were reportedly unhappy with the results of the initial “Mortal Throne Of Nazarene” recording sessions & asked the band to re-record the album in its entirety which they reluctantly agreed to do. The final product is the result of those subsequent sessions but the whole fiasco clearly left a bad taste in band leader John McEntee’s mouth. The original recordings would be released as “Upon The Throne Of Apocalypse” the following year, an album that I eagerly but unsuspectingly snapped up at the local record store only to find that it was indeed the same album with a different production job & the tracklisting reversed. It probably served me right given that I’d again secured the “Mortal Throne Of Nazarene” release through tape trading & therefore didn’t have easy access to a tracklisting. To be fair though, I actually prefer the original recording despite the obviously over-pumped levels & slightly more cavernous feel. It just seems to have a little more depth & power but both versions have their positives.

Now, fans of “Onward To Golgotha” needn’t have been concerned when going into “Mortal Throne Of Nazarene” for the first time because, despite some small adjustments to the band’s sonic arsenal, this was still very much the Incantation that they’d grown to love & adore with the debut. The guitar sound is noticeably thinner & less bass-heavy which gives the riffs more definition & enables the performances to sound a little tighter. More importantly though, the doom/death component that I found so appealing on “Onward To Golgotha” has been accentuated further & (much like their brothers in gore Autopsy) those parts have inevitably always lined up with Incantation’s most captivating material for me personally. In fact, I'd go so far as to say that they easily compete with the elite masters of the death doom metal subgenre with Aussie legends diSEMBOWELMENT often springing to mind, particularly during the second half of opening cut “Demonic Incarnate” & the epic eight minute closer “Abolishment of Immaculat Serenity” which is the clear album highlight in my opinion. The vocal performance of second guitarist Craig Pillard certainly helps to accentuate the overarching feeling of dread as his delivery is significantly more oppressive & suffocating than on the debut which saw my levels of intrigue sky-rocketing. When you place those vocals over the doomiest moments on the record you get some truly intimidating music that could only be regarded as death metal for death metal purists. I mean if you kinda like death metal because your friend played you some At the Gates, Behemoth & Death records when you were drunk after a party one night then you’ve got a lot to learn because this band takes the death metal aesthetic to extreme levels.

Much like “Onward To Golgotha”, the dirty production job can see the faster material tending to fly past you in a blur if you’re not paying close attention on your first couple of listens & this makes the album significantly less accessible than your average early 90’s death metal release but repeat listens see the intricacies of the riffs starting to become apparent & you’ll soon discover that McEntee has mastered a more angular take on the tremolo-picked riff that doesn’t conform to traditional rhythmic templates. He takes an unusually off-beat & angular approach to his melodic yet undeniably brutal progressions that catches your ear & leaves you wondering what it is that’s different about it. Drummer Jim Roe tends to focus more on power & brutality than complexity in order to allow the layers of guitars & vocals the room to fully engulf you without ever descending into a pit of sludgy noise while the thick sound of Dave Niedrist’s bass guitar provides further weight to an already imposing wall of corpse-ridden death.

I probably didn’t realise the class of this release upon first listen. I just knew that it appealed to my underground death metal ethos on a level that I wasn’t used to experiencing & was overcome by the urge to return to it over & over. In time I’d come to the realisation that I’m simply a kindred spirit of McEntee’s when it comes to this sort of music. I feel the same thrill that he does when I hear his riffs for the first time & I crave the same sort of atmospheres that he strives to create. For that reason, I find it hard not to rate “Mortal Throne Of Nazarene” as a classic release despite the fact that tracks two through six tend to be hard to differentiate due to a combination of the murky production & the similar song-writing concepts. But sometimes you just have to go with your gut when it comes to music & you shouldn’t have to explain yourself when a record sees you buying into the composer’s original concept in a major way. As far as Incantation’s overall back catalogue goes, I’d suggest that 1998’s “Diabolical Conquest” might be the band’s pièce de resistance however this record isn’t too far behind it to tell you the truth & it should be compulsory listening for all fans of the purest, grimiest, most grisly death metal in existence.