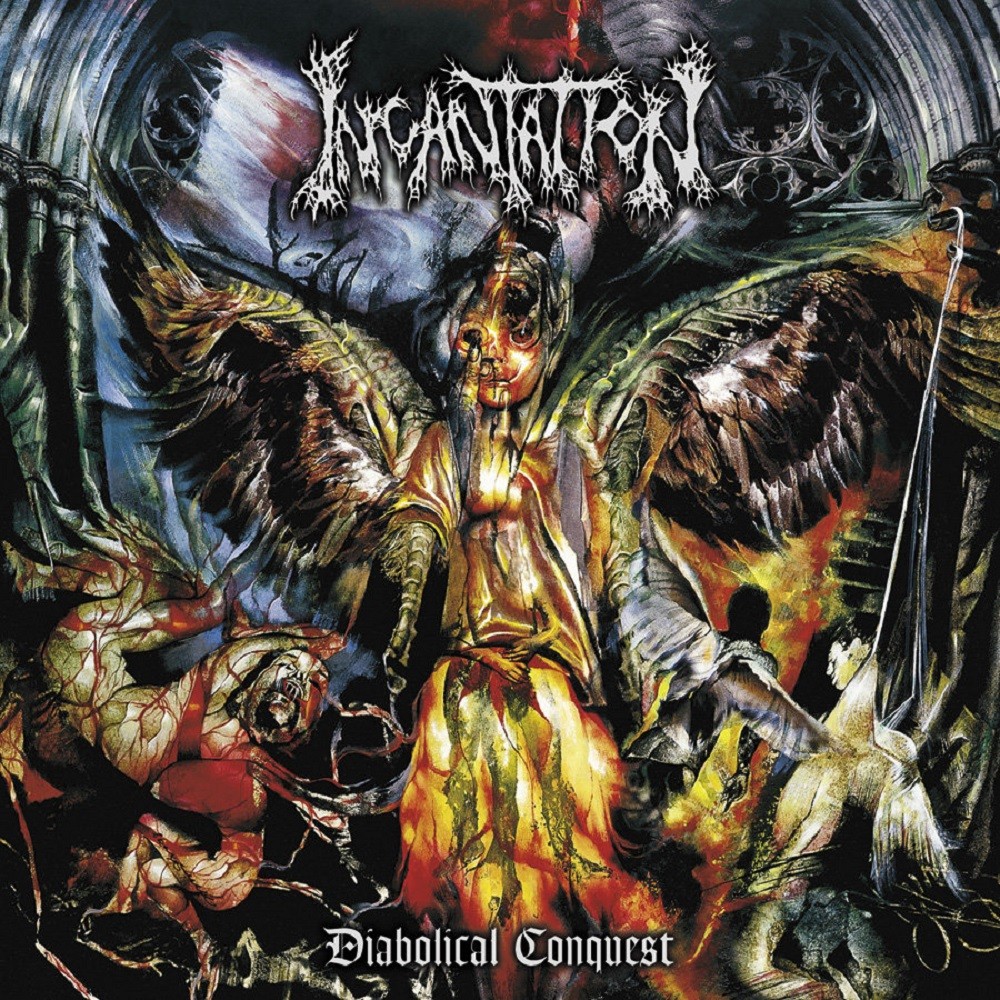 I first had my attention drawn to long-time New Jersey death metal stalwarts Incantation way back in 1992 when I was still a teenager & at the height of my obsession with the genre. Their debut album “Onward To Golgotha” made a significant impression on me & received lots of play time over the next year or so although it never quite reached classic status for me personally. It’s dank & deathly atmosphere was the very definition of what death metal aspired to be though & ever since I’ve come to regard Incantation’s discography as some of the purest death metal you’ll find. I mean if you only have a passing interest in death metal then you may find a band like Incantation to be a bit of a challenge as they favour atmosphere & darkness over precise execution & memorable hooks. In fact, that approach was both “Onward To Golgotha”s strength & weakness if you know what I mean. I find that I’m always enjoying myself but the individual songs lacked the variety & definition to allow them to rise to the top tier of the death metal elite. I found just as much appeal in Incantation’s even murkier & sludgier follow-up “Mortal Throne Of Nazarene” & even invested in the alternative mix of the album known as “Upon The Throne Of Apocalypse”, both of which I found to really float my boat without ever threatening to tip me over the edge into genuine classic territory. So by that stage Incantation was still firmly entrenched as a high quality & consistent second tier death metal act; the sort of band I’d always check out but would rarely find myself gushing over for years to come. 1998’s third proper studio album “Diabolical Conquest” would see the band finally starting to meet their enormous potential though. Not by doing anything noticeably different to before (which is interesting in itself given that they only had one band member remaining from their debut by that stage), but through some intelligent fine-tuning & the sharpening of some already fairly deadly instruments.

Upon first listen it’s easy to discard “Diabolical Conquest” as just another Incantation record. I mean it’s nothing you haven’t heard before, right? The intentionally sludgy & mossy production, the gorgeously muddy guitar tone, the monstrous bass tone, the loose-ish performances that ooze of underground credibility, the ultra-deep & repetitive vocals (courtesy of The Chasm bassist Daniel Corchado in his only appearance with Incantation)... This is Incantation doing what they do best & being completely unapologetic for it but repeat listens will see the full weight of this album’s arsenal slowly becoming apparent. The band have taken the opposing extremes of their sound & pushed them further to give themselves a greater dynamic range while also returning with their biggest & best production to date which offers greater clarity without ever losing its filthy grip on the underground. I’d suggest that this is a more brutal record than Incantation’s earlier releases with a little more emphasis being placed on blast beats. There’s no time for guitar solos here. Incantation intend to bludgeon you into submission & I’ll be fucked if they don’t succeed. But then they also accentuate & take full advantage of the slow, dirge-like doom/death sections that highlighted “Mortal Throne Of Nazarene”, leaving the listener to wade through the mire whilst being almost overcome by the sheer dread of what lurks beneath. Personally, I’ve always felt that Incantation were at their best when they dropped the tempo as I feel their sound is better suited to the greater definition the additional space allows for so this element of the record was most welcome.

The tracklisting is extremely consistent with no single track coming close to being subpar or even dropping the quality level below the “high” marker for more than a few moments. “Diabolical Conquest” is very much the embodiment of a band that knows their craft well. If I’m being overly picky I could suggest that (very much like the band’s first couple of albums) there’s not all that much to differentiate five or six of the shorter tracks which tend to take a very similar approach, particularly the more blasting numbers. But if I’m honest, this album falls into unique company in that its acclaim is mainly drawn from its more substantial inclusions & rightfully so too. The clear highlight is the closing sixteen minute epic known as “Unto Infinite Twilight/Majesty Of Infernal Damnation” which sees Incantation fully embracing their doom/death side & producing one of the great works of the subgenre in the process. It possesses a very different feel to the rest of the album & leaves the listener wanting much much more. In fact, it may well be the crowning achievement of Incantation’s career to date &, given that its lengthy run time takes up a third of the album’s total duration, its impact on my overall impression of this release cannot be understated. The other genuine classic amongst the eight tracks is “Desecration (Of The Heavenly Graceful)” which once again sees the band working with more moderate tempos & accentuating their best elements. This is premium, peak-time death metal that will have your purists frothing at the mouth.

“Diabolical Conquest” may not offer a lot in the way of experimentation or originality but it never claimed to. It always wanted to be a death metal record & it subsequently achieves it in emphatic fashion by presenting one of the truest amalgamations of the death metal aesthetic you’ll find. I mean I literally find myself envisaging corpses climbing out of their tombs in the graveyard at midnight when I listen to this record & isn’t that what good old-school death metal is all about? Sure its fanfare is heavily reliant on its highlights but you could just as easily say that it’s the strength of the filler material that enables someone like me to score it so highly. I don’t think it’s worth over-thinking things when it comes to a band like Incantation though. They clearly do what they do for the love of it & there is rarely a fuck given about what’s trending right now or for what anyone else thinks. At my core I’m a death metal obsessive over any other subgenre & this album makes no attempt to hide the fact that it’s a death metal record for lovers of death metal. Is this Incantations’ crowning achievement? Quite possibly. I’ve swapped & changed my opinion on that a few times over the years but I’m gonna go with it for the time being given that I recently revisited “Onward To Golgotha” & couldn’t get above a very solid 4/5 rating. Perhaps it’s only taken me this long to come to my senses due to the fact that, unlike Incantation’s earlier releases, I didn’t get onboard the “Diabolical Conquest” train until a good eleven years after its release due to my wandering musical eye having taken me further afield by that point in time. Regardless, this is peak time, premium level death metal of the highest order, complete with a timeless authenticity & a deathly atmosphere. There will always be an audience for this sort of thing & it isn’t limited to one particular age group. Those with an ear for the underground will forever rejoice in such an uncompromising & punishing display of blasphemy.

For fans of Immolation, Disma & Autopsy.

I am far from any great authority on death metal, there are huge swathes of releases I am not that keen on, it's obsession with brutality, coupled with some of the more distasteful imagery and at the other end of the spectrum, the constipation of technically obsessed DM leaves me mostly unimpressed. I do love a good old-school release however, in the vein of Autopsy, Morbid Angel and the like. I've paid scant attention to Incantation previously, only having heard their debut and their latest albums before (both of which I did enjoy). So I went into this expecting something pretty decent, but man, this is earth-shatteringly brilliant death metal of a kind I hear too infrequently. It takes the OSDM sound and couples it with more ambitious songwriting that involves multiple changes in tempo during each track from battering brutality, through medium-paced riff-fests to death doom crawls. The vocals are archetypal abyssal growls that have, presumably, helped to define what a death metal singer should sound like, the guitars have a perfect filthy solidity to their tone that buzz and batter like a chainsaw crossed with a sledgehammer. The one thing that really stood out for me though, was the supergnarly bass sound. That growling bass guitar during Ethereal Misery is absolutely insane and has got to be one of my favourite pieces of basswork ever. All this is before we even get to the sixteen minute closing epic, Unto Infinite Twilight / Majesty of Infernal Damnation, a proggy (in a good way), sixteen minute death metal saga that doesn't try to impress with technical flashiness, but rather the quality of the songwriting and the searing intensity of the bands performance. I'm also guessing here that this track was a big influence on Blood Incantation and their similar epic on their Hidden History of the Human Race album (another DM fave of mine coincidentally).
I love it when an album comes out of nowhere and grabs me by the throat like Diabolical Conquest has done. I'm gonna go out on a limb here and, even after only a couple of listens, I reckon this is a five star classic and one of my all-time favourite death metal albums.

In a discography of varying quality of output, Diabolical Conquest might just be the best record Incantation have ever released.  This is in no small part down to Daniel Corchado (of The Chasm) delivering a sterling performance instead of original vocalist Craig Pillard who had by album number four departed from the band.  Corchado also played guitar and bass here too and he (and indeed the whole band) sound sharp and on top of their game.  The bass thunks and rumbles throughout and gives a real sense of atmosphere and threat to the tracks.

Gone are the more murky elements to the band's sound, even the more doom-laden sections are more coherent somehow with the riffs sounding clear and imposing as opposed to lost in some maelstrom of chaotic mixing.  As a result there's an edge of optimism to the sound on the album, not happy smiley-face optimism, more of a satisfaction that the band is working as a unit and ideas are coming to fruition well.

Losing none of their trademark power and baleful atmosphere, Incantation kind of cleaned up their act somewhat on Diabolical Conquest but still were instantly recognisable as the band fans had grown to love over the preceding eight years of their existence.  They embraced the new blood and ensured they maximised the benefit of having an experienced and talented addition like Corchado in the ranks.  It was a shame that John McEntee couldn't convince him to stay longer than just one album as the output for the years since has fallen way short of the quality of this album.

Let's acknowledge that this wasn't just the Corchado show though.  McEntee's natural ability to constantly express himself through death metal is as strong as ever here in both his playing as well as his song and lyric writing.  Likewise, Kyle Severn gives a strong performance on his first Incantation studio album, blasting his way effortlessly through each track.

Probably the last great Incantation album right here folks.  Add it to the collection if not already in there.