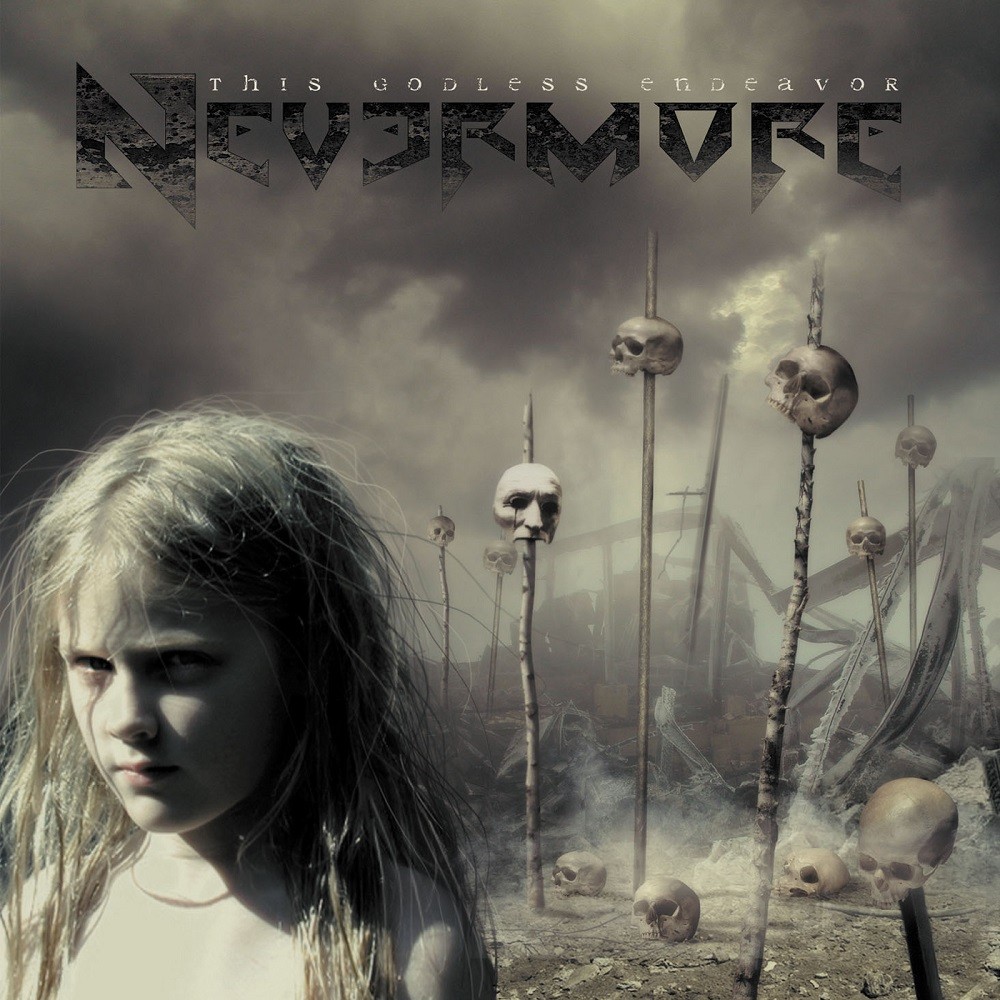 I am always suspicious of bands that are the darlings of the metal press, as Nevermore certainly were at one time. Mags like Kerrang!, Metal Hammer and Terrrorizer always seemed to be the bitches of the record labels and would schmooze whatever crap the labels were pushing at the time. This is why I spend so much of my time mooching in the metal underground listening to obscure shit no one else cares about I suppose. I have no objection to popular bands, I just like to discover them my own way, not have them pushed into my face by some music press hack at the behest of a record label marketing exec. Furthermore I had somehow garnered the impression that Nevermore were some kind of Dream Theater clone (which certainly didn't help endear them to me).
Anyway, encouraged by positive reviews on this very site, I took the plunge and so, This Godless Endeavor is my first experience of the band. While it is undoubtedly true that they are more Dream Theater than Dream Death, luckily they eschew the endless technical wankery I associate with that bunch of insufferable prog metallers. At first listen I wasn't all that impressed I must confess. Having approached the album from the perspective of a member of The Pit, I was expecting a lot more on the thrash front, but the album seems to contain very little true thrash. I would say it's more akin to the thrash-derived power metal of early Iced Earth. So I then came at it from a different perspective, with more of an open mind to the prog elements. Now my current yardstick for progressive metal are albums like Blood Incantation's Hidden History... and Venenum's Trance of Death, both of which exhibit a degree of visceral aggression which contrasts the intellectual progressiveness and gives a more complete experience in my opinion. This Godless Endeavor does exhibit a little of this primal aggression, but it feels stilted and constrained compared to the more cerebral aspects of the album, which are still the main focus. However, even I must agree, it is done very well, there are some quite memorable, well-written songs and the performance is excellent. I can certainly hear why many people are fans, but it doesn't quite hit the intangibles for me. Sure, I'll nod my head in appreciation at a riff, a solo or a vocal melody but at no point did it make make me want to shout "FUCK YEAH!!" and I think the very best metal should do just that.

Every now and then, an album gets released that when you listen to it, at some point... "HOLY S***!!", you would scream at the risk of one of your parents hearing you swear, "This album rules!" Whether it's a riff, solo, or intense vocals that might trigger some spine chills. It's not every day that those passages of ascending metal standards can cause a music shock.

This Godless Endeavor is an album with the rare chance of being consistently full of those triggering passages in almost every song, causing this Nevermore album to be earth shattering than an earthquake! This is another perfect Nevermore album, with quite a lot of diversity.

One of said passages brings the album to a heavy start when the first track "Born" opens. The lead guitar riff during the chorus has some tremendous technical insanity. "Final Product" is an amazing catchy song with excellent drumming. "My Acid Words" starts with a brief doom-like intro before speeding up with an appealing technical riff. The passage that leads into the solo is definitely one of my favorites with high-level drumming and guitar work.

"Bittersweet Feast" has some wicked rhythm. "Sentient 6" and the title track are what I would consider the two epics of this album; the former is a lyrical continuation of the almost 10-minute epic "The Learning" (from The Politics of Ecstasy), and the latter is longer, nearly a minute under "The Learning". "Sentient 6" is a slow ballad overall, but it gets heavier throughout with an appropriate solo, and lead singer Warrel Dane's vocals slowly ascend from melancholic to hostile but still clean. "Medicated Nation" has some of guitarist Jeff Loomis' more gracefully heavy playing. The interlude "The Holocaust of Thought" has a wonderful bass tone and nice soloing melody.

"Sell My Heart for Stones" is another ballad that sounds more mainstream yet still powerful. "The Psalm of Lydia" is the heaviest, most technical song on the album, probably by the band. The intro and part of the first verse both have a crazily technical riff, and there's a killer guitar solo battle in the middle of the song. "A Future Uncertain" has some marvelous acoustic playing in the intro, and the rest of that song can be considered a classic-sounding song because the main riff and lyrics are similar to the ones in an old-school Nevermore demo song "World Unborn". The aforementioned title track also starts with an acoustic intro, before switching to the irresistible epic itself, and it has the best sweeping passage of the album right before the climactic ending.

There are so many adjectives that many other reviewers of this album have used, but I think this is probably one of the most technical, masterful, heavy, intense, and to sum it up, awesome albums yet. I highly recommend getting this album, maybe a few copies to give to your metalhead friends!