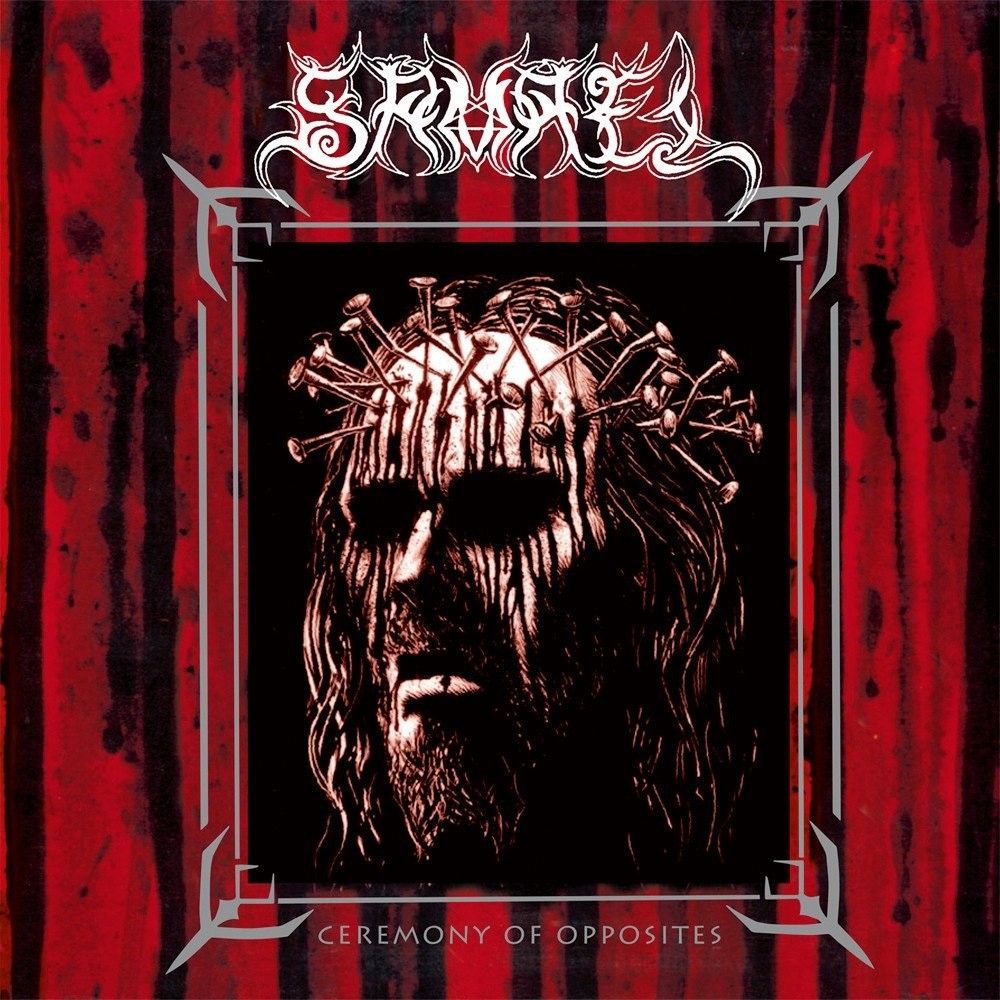 While I certainly enjoy Samael's first two albums, there's no doubt that Ceremony of Opposites is where they really lifted their game. It's immediately apparent that the production level is far superior than what came before it, with a fantastic, crunchy sound and clarity for all musicians involved. But perhaps what's not immediately apparent is how much it differs musically from Worship Him and Blood Ritual. Ceremony of Opposites still has the classic slow to mid paced riffs and drumming, along with keyboards for atmosphere and Vorphalak's distinctive black metal vocals. There's still nothing particularly technical about anything the band do and thematically, things haven't shifted at all. But while on paper it sounds like just another Samael album, it’s something much, much more.

Vorphalak's riffs are both heavy and extremely catchy, making the entire album a memorable experience. His vocals still contain that unique accent that created some awkward moments on earlier albums, but he appears far more assured of himself here. Xytras' drumming is much more aggressive without ever approaching any sort of high speed. He brings in some double bass kicking at times but never anything resembling blast beats. Still, each beat is incredibly precise and intense and it's all a perfect example of when restraint is far more effective than flashy extravagances. One of the biggest changes for this album is that Xytras didn't perform keyboards on it, with a guy called Rodolphe taking over. It's strange that this occurred as Xytras handled this aspect on every album prior to this one and every album since, but it certainly gives Ceremony of Opposites its own unique flavour. His little flourishes add greatly to every track and give tracks such as Baphomet's Throne a life of their own.

Ceremony of Opposites is very possibly the best album this Swiss band would ever release, with only Passage coming close in my opinion and most of their newer material disappointing greatly. It's 36-minute running time seems to fly by and while I can easily attach words such as memorable and catchy to this material, it never comes across as soft or even particularly melodic. It's just well-crafted mid paced black metal with an industrial edge and great atmosphere. Highlights for me are Black Trip, Celebration of the Fourth, Baphomet's Throne, Flagellation and the title track. If you want to find out what the black metal side of Samael was all about before they went purely industrial, this is a great place to start.

Since Black Metal has proven to be one of the most forward-thinking and impressive genres even into the 2020’s, I’ve found myself listening to a lot of it as I search for my favorite albums of the year. The scope of the genre is extremely broad and while most associate Black Metal with lo-fi production, tremolo riffs, and blast beats, it wasn’t even close to the only style of Black Metal to come out of the explosion of classic albums between 1992 and 1995. Ceremony of Opposites is incredibly far removed from the likes of Darkthrone or Emperor but still manages to convey the Black Metal feel through a few but important constants in the raspy vocals and small hints of synth-y orchestra in the background. The rest is a battering mix of heavy chug riffs, almost Industrial Metal sounding drums, and rolling bass riffs that sometimes forgets that it’s a Black Metal album altogether, especially on tracks like “Son of Earth”. I consider Black Metal to normally be a more natural sounding genre, mainly because of Atmospheric Black Metal’s tendency to make every album about walking through some snow-covered forest, but also because of how freeform and messy it can be at times. Samael turns that notion on its head entirely and offers up an almost mechanical sounding riff-fest on Ceremony of Opposites and I’m all for it.

I’ve grown to really enjoy the more complex tremolo progressions or the brutally technical melodies of extreme metal genres over the years, but at the bottom of my heart I’m a simple person; I like a solid, heavy riff. I’m not sure if there’s a riff on this album that I don’t like, with Samael bringing a chunky and poignant production quality that contrasts with the normally thin sounding production of Black Metal at the time. It may not have the heft of Death Metal production, but it almost gets there in the more rhythmic tracks like “To Our Martyrs” and “Flagellation”. Given the more mechanical style of the drums and guitars I’m not sure why the classic Black Metal orchestra synths sound so good and give the tracks a ton of creepy atmosphere, but they pull it off somehow. All of this comes together in short but satisfying tracks that barely reach the 4-minute mark most of the time. Each track revolves around its main riff but certain sections in “’Till We Meet Again”, “Crown”, and closer “Ceremony of Opposites” take interesting detours into a more traditional Black Metal style. “Ceremony of Opposites” especially showcases this with its even slower tempo and ample use of Atmospheric Black Metal style synth, ending the album on a note that feels like it shouldn’t fit the album, but it helps to tie everything together nicely in my opinion.

As much praise as I’m giving this unique take on classic Black Metal, it’s a fairly simple riff-fest at the end of the day. Even though there’s some nuanced and neat additions like the background orchestration and some killer bass grooves hidden beneath the pounding of the kick drum, I doubt this album will be much of a grower for me or most people. I think Ceremony of Opposites caught me at a good point in my listening where I wanted nothing more than to rock out to some gnarly, grooving riffs, but it’s absolutely had enough depth to keep me coming back for more. The riffs of “Black Trip”, “Son of Earth”, “Mask of the Red Death”, “Baphomet’s Throne”, and “Flagellation” show that this less theatrical, stripped down version of Black Metal earns every merit that it gets. It also shows that Black Metal is truly a genre that can be pushed, pulled, or stretched in any direction to create exciting and quality music, depending on what you’re looking for. I can see my opinion of Ceremony of Opposites dropping over time but for now I think it’s a phenomenally fun album that doesn’t miss a single time when it comes to riffs.