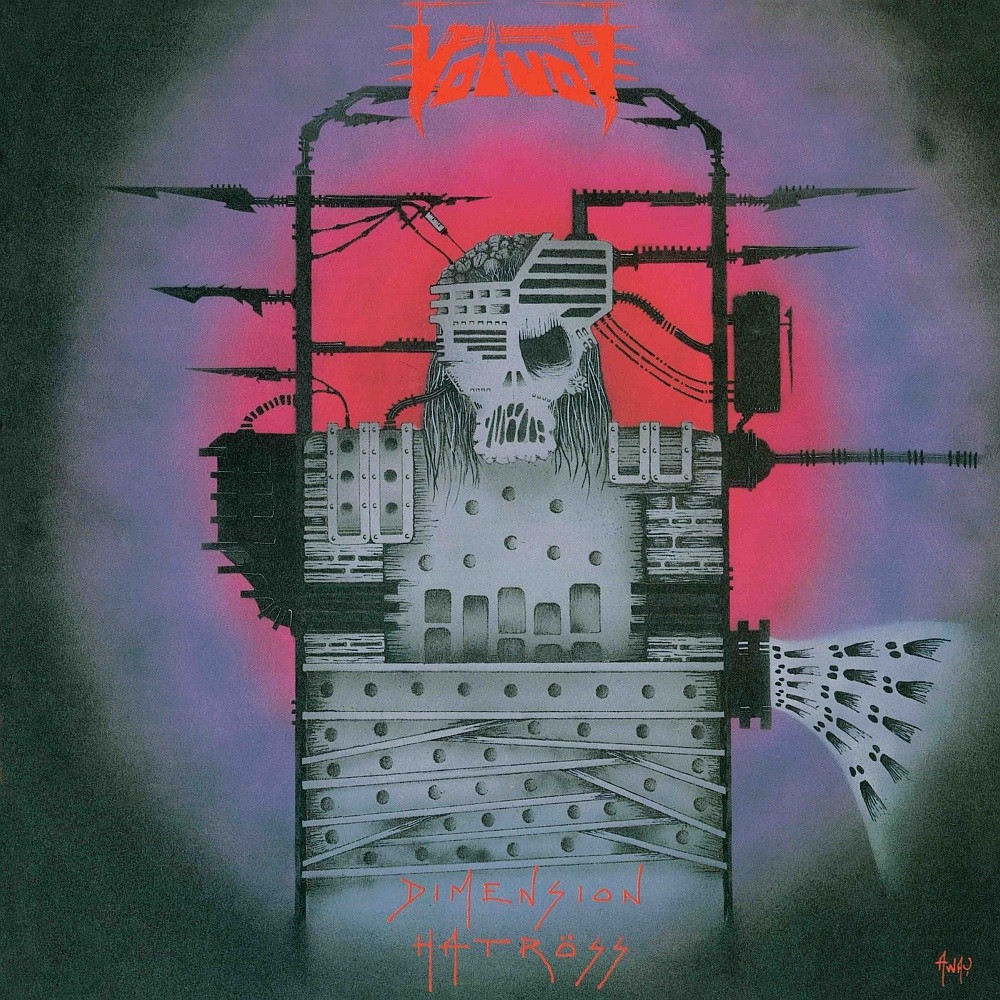 It sure does take a long time to get your head around a Voivod album. There is so much going on, with creative musicianship flowing seemingly full tilt. Killing Technology didn't quite grab me the way I was hoping it would. I found segments to be fascinating but then quite a few other parts didn't really click. I still find this to be the case with Dimension Hatross. The reason I give this album 4 stars though is due to their being fewer of these awkward moments and more of the intriguing, awesomeness.

It's obvious that these crazy Canadian's set themselves no boundaries when writing music and the word progressive can comfortably be thrust next to the words thrash metal. They mix a weird sci fi element with a more punkish atmosphere to create something completely unique. Snake's vocals are improved also with far less hardcore aggression and a whole lot more clean melody. It's a bit off putting at first but it works perfectly once you're used to it.

Overall, I'd have to say that Dimension Hatross is a good album, but I still can't say that I love the album from start to finish. I'm not sure that's the point though. There is so much adventurous, genre defying activity throughout that it's hard to appreciate it all for what it is. Maybe with more listens it will become even clearer. I'm sure the same can be said for Killing Technology. With time I may come to love that one too!

Whenever there's experimentation, their results are often mixed reactions from many critics. The negative reception is due to those changes being suddenly different from the sound they're used to, whereas bands like Voivod take things slowly when gradually changing their sound for a fresh complex result. And on that same year, Metallica also released a more progressive thrash metal album before making their abrupt switch to the heavy/alternative metal that was received negatively...

I guess you can call Dimension Hatröss a progressive thrash metal album, but only a few traces of thrash remain, those traces being just the fast thrashy tempos. Those tempos are dominated by all its changes every few measures.

The experimentation begins in "Experiment" after its turbulent intro. But it's not until "Tribal Convictions" when those rapid tempo changes come in after the second verse where Snake (Denis Bélanger) does some sneering like a snake. Another clear example of different tempo changes is "Chaosmöngers", having over 5 time signatures, far more than just two or three you find in non-progressive metal albums. Its chorus and bridge is a bit punk-inspired in both the music and vocals.

The 4 and a half minute long "Technocratic Manipulators" demonstrates highly creative originality, packing powerful metal punches. Why did I mention its length? Because it can be progressive without turning into a 20-minute epic! After a calm dark ambient intro with a few bass touches, the crossover-ish dynamics erupt with speedy riff rhythms and signature snarling vocals. Near the two-minute mark, the song makes a weird evolution into old-school Hawkwind-like spacey guitar rhythms. Many styles and influences all in dexterous textures in only under 5 minutes. A truly awesome feat! "Macrosolutions to Megaproblems" is another favorite with a memorable rock-ish chorus.

"Brain Scan" has some things worth mentioning including a jazzy chorus with complex drumming. You've read right...jazz! More of those jazz influences come from the otherworldly diminished chords of Piggy (Denis D'Amour) (RIP). "Psychic Vacuum" has many bizarre tempo changes, with each verse having a different tempo from one another. Same with "Cosmic Drama" which has an unusual sneering chorus. The bonus cover of the classic "Batman Theme" has fun wild soloing, especially in its beginning.