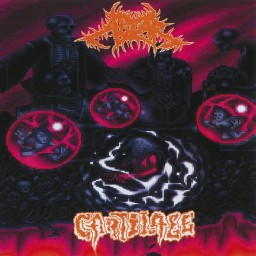 In the early 90's death metal underground, split releases became more popular for spreading the music of underground bands among smaller independent record labels. One fine example of such a release was the Altar / Cartilage Split Album from the cult Drowned Productions label, which presented one band each from two of Europe's most prolific and distinctive sounding underground death metal scenes, Sweden and Finland. This album is sometimes unofficially referred to as 'Ex Oblivione / The Fragile Concept Of Affection', named after the titles of the two individual recordings of the bands, but officially the album was simply titled Altar / Cartilage - Split Album.

Starting the album is Sweden's Altar, who thrash their way through five songs of very raw yet very musical and well written/played old school death metal showing some musical roots in dark evil thrash, yet sounding cryptic and underground in the early 90's death metal way. The songs here vary in tempos from slow and heavy to fast and aggressive with mid to low range aggressive old school death growls. The production is very underground sounding and more like a demo but works reasonably well for this style of death metal. All songs are strong so picking a stand out song is not easy, but I especially liked the five minute plus closer and title track 'Ex-Oblivione'.

Following Altar is Finland's Cartilage. The good thing about this split album is that despite the two bands being from two different countries / scenes, their music does not differ too much in style (unlike the Masacre / Profanatica split album from Osmose Prods did for example) and therefore the music from the two bands combines very well for a split album of underground death metal of the day. Cartilage also appear with five songs of raw, cryptic yet very well written and musical underground old school death metal. The tempos range from slow, heavy and gloomy to fast aggressive sections with mid to low range evil old school death growls. The Cartilage songs here are a good example of early 90's death metal in its earliest form, yet were less musically rooted in thrash, and show the characteristic obscure and cryptic atmosphere of early Finnish death metal. The production is raw and underground yet strong and brings the band's music across very well. Stand out track here for me is 'Consanguine to Understanding'. Interestingly, the CD version of this album included two bonus tracks from each band, not present on the LP version. One difference with the two bonus tracks from Altar is the lower tuned guitars, yet the musical style overall remains the same, which shows very well how the band's sound evolved. The two bonus tracks from Cartilage include the intro and opening song of their demo, 'The Altar', a personal fave of mine since that demo was my introduction to the band.

This album is a cult release from the deeper underground of the early 90's death metal scene and is difficult to find. Do not despair fellow death fiends, for it has been re-released as a 2xCD set from Xtreem Music with additional bonus / demo tracks from each band. There is also a very good quality bootleg circulating that is an exact copy of the original CD that will be of interest to collectors. Either version is highly recommended for old school death fanatics who like their death metal cryptic, raw, and underground. [Originally written for Devoured Death fanzine #2, published Feb 2022] 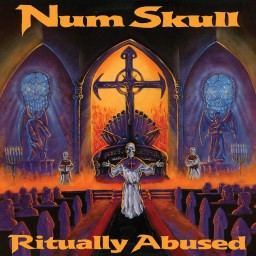 When looking back at the lesser known thrash bands of the 80's, it is not common to find a band that should have been an absolute world beater. Num Skull is one such band. Their debut album 'Ritually Abused' blasted on to the underground thrash scene in the same year as well known thrash albums such as 'South Of Heaven' or 'Eternal Nightmare', yet it easily tops both of those, such is the quality of the songwriting, musical performances, and production of this album.

Playing a style of violent and at times hyper-fast thrash not heard from so many bands of those days, Num Skull play with all the fury and speed of bands such as classic Dark Angel, Sadus, and Bloodfeast at their absolute fastest and most furious. The bands mentioned are actually the best guide to the sound of Num Skull, sounding very similar to those bands much of the time in the riffing, vocals, and fast tempos. Yet Num Skull gave all those bands a serious run for their money for songwriting, and easily surpassed them in production, the album's production is that good, it is simply phenomenal for an album from a lesser known band on a small independent label.

Listening to this album, it is a wonder how this band played like fiends possessed with such furious speed, violence, and aggression and execute it all so well and at a level not often heard among the classic 80's thrash bands. With such a strong album, it is also a wonder how on earth this band did not get better known and signed by a label like Combat or Metal Blade, such is the quality of this album. Perhaps what played a role was the fact that Num Skull were from Chicago, which did not have as well known a scene or characteristic sound as those of the SF Bay Area or NY thrash scenes of the day. Nonetheless, 'Ritually Abused' is one of those unhailed classics of 80's thrash that has gotten more recognition in the old school thrash revival era of recent years than it did back in its day.

Better late than never for this great album to get the recognition it always deserved now that is has been re-released officially by Relapse Recs, and there are also some unofficial versions circulating. It is difficult to pick stand out tracks, they are all that good, but personal faves would be 'Kiss Me, Kill Me', 'Turn Of A Screw', 'Death And Innocence', and the title track. Get this and prepare to be thrashed into oblivion.  [Originally written for Devoured Death fanzine #2, published Feb 2022]