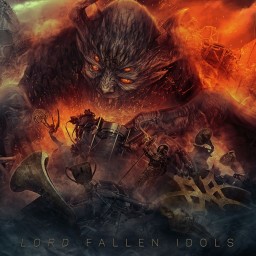 With Fallen Idols, Lord returns with their first full-length album of completely original material since 2013’s Digital Lies. It’s been a long time between drinks for the Sydneysiders, who have been at the vanguard of the Australian metal scene dating back to the previous incarnation of the band, Dungeon, led by vocalist/guitarist/mastermind Lord Tim that emerged in the late-90s. Lord (and by extension Dungeon, whom Lord paid acknowledgement to on the highly recommended 2014 box set The Dungeon Years) have been knocking out great music since.

One thing Lord can always be counted on for is consistency. I know going into one of their albums I’m going to get some infectious choruses, great clean – but not overdone – production, and some shredding leads, as they tilt back and forth between their speed/power/traditional metal hybrid. Whilst they certainly do have a well-established framework that they lean into, they always manage to subtly sprinkle in a touch of flavour here and there, such as the more aggressive vocal stylings on opener “United (Welcome Back)”, “Chaos Raining”, and “The Edge of the World”.

This is super effective on a track like “Chaos Raining” as the moody and menacing mid-paced verse really opens up when the chorus finally hits after being held back for almost a third of the track's runtime. “United (Welcome Back)” kicks off the album with a long, smouldering scream, as well as utilising a call-and-response between the melodic harmonies and aggressive gang vocals during the chorus. “The Edge of the World” is easily the most venomous track, featuring blast beats, pummelling double-kick and scything riffs that really wouldn’t be out of place at the more violent end of thrash.

There are also some nice, understated symphonic touches as well on tracks like the aforementioned “Chaos Raining” and, in particular, on closer “Master of Darkness” (which I have a hunch is an ode Darth Vader. That is how my inner-nerd is reading it). These symphonic touches work really well behind an assertive opening riff, building towards a strong, melodic chorus through several sections that further displays the group’s attention to songwriting that unfortunately is sometimes lacking in modern metal. Lord has always been able to gauge when to go balls-to-the-wall and when to taper the intensity back and allow the melodies space to carry the piece forward.

“Counting Down the Hours” brings the intensity and tempo down, and is a nice moment of calm, dare I call it a power ballad, between the more aggressive “Chaos Raining” and “The End of the World”, that allows a chance to breathe several tracks in a listing that is surprisingly up for most of its runtime. In the hands of others, such a song may come across saccharine, but Lord has always pulled this style off with aplomb, and it’s a shame they don’t go towards this territory more.

Tracks like “Kill or Be Killed”, “Nod to the Old School” and the title track offer some of the more immediate vocal hooks. “Killed or Be Killed” with its gang shouts of the track title and big vocal harmony sing-along that is potentially the most anthemic of the entire disc (also bonus points for the Halford wails). “Nod to the Old School”, which at 3:49 is the album’s shortest and most immediate track, features infectious riffs and an immense guitar harmony. I’m also a sucker for any chorus that has the band drop out with the vocals continuing before slamming back in. “Immortal” opens with a mid-paced thrash riff that is absolutely incendiary, before giving way to some of the most emotive vocals of the entire set.

The production is nice and crisp without being too clinical with great performances all round. The bass sits nicely, with a warm but aggressive growl to it, and the drums punch without ever overpowering the mix. I really cannot praise the lead work of guitarists Lord Tim and Mark Furtner enough. Always tasty, “Wilder than the Wind” probably features my personal favourite lead work, with some short guitar bursts pre-verse, before a ripping extended lead that evolves over several riffs that expertly showcases all the tools that are in the kit before dropping you off into the final chorus.

Lord is practically part of the metal furniture in Australia at this point, and they have been so reliable for so long that it is very easily taken for granted. Whether it is their best release is hard to say for this very reason, but “Fallen Idols” definitely has a little bit for everyone who are accustomed to the more ‘traditional’ side of metal but with an unmistakably modern bent. Such an approach is a Nod to the Old School certainly, but always Immortal! 4 FISTS