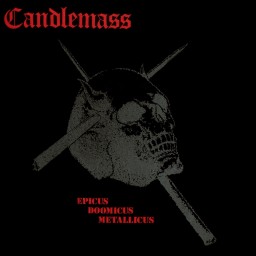 Let's review the best album of history song by song with it's main creator Leif Edling, Doomfather and his memories.

"If you should play one song for a person that never heard the band before, this is it" he says. Solitude by Candlemass has been the soundtracks for many people's lives and many other want it to be played at their funeral. It is such a great way to describe what is death and it means for us in artistic ways.

"Two people have told me that a person very close to them have taken the car out to the woods and shot his head off while listening to this track" Leif says. I always tended to emphasize the effectiveness of this track on me by dreaming of this desperate event and maybe I was encouraging myself or trying to get inspired from it, I am not sure.

And "the chorus is inspired by Venom's Buried Alive" Leif says.

"This is probably my favorite track on Epicus. I love long intro, the chords that I worked on for weeks and weeks" Leif says. Demon's Gate is a perfectly crafted track with just enough amount creepy build around the intro, melodic riffs, haunting atmosphere and terrifying lyrics.

"Mats (the drummer) is of course responsible for the level of the drums in the mix. We lowered them when he wasn't around or turned his back but still, some of the loudest drums I have ever heard on a record" Leif says. Yes, this intense drum play also marks Epicus with a unique, distinctive stigma that belongs to hell originally. Drums of hell and horror, that's how I describe them.

"So one day, I think it was just a couple of weeks or so beforethe recordings of Epicus and we hadn't found us a singer. It was totaly impossible. So Mats came to rehearsal room with this tape. Johan was singing" Leif says. In my opinion there is no better vocalist for Candlemass to fit their style. With his intense performance on Crystall Ball and the rest, Johan Langquist is the best singer by far. His style is so dynamic, he is able to adapt Candlemass's bleak style perfectly and he naturally sounds sentimental somehow. Originally he was a hard rock singer in his band called "Jonah Hex".

"I have a vague memory of reading The Lord of the Rings at the time and it could be about Lord Saruman and Palantirs" Leif says about Crystall Ball. I tend to deem this crystall ball as an artistic interpretation of earth which we see "visions and dreams" when we look at it.

"Gaze into the crystal, see what it tells

It can bring you all fortune, do you so well

Visions and dreams you can see in the Crystal ball"

"This song begins with a count-in in Swedish. When we toured with the guys in King Diamond they told me that they bought the album, thought it was absolutely amazing and we must be from America until they heard the Swedish count-in! They told me they almost fell backwards" Leif says.With this little intro, Black Stone Wielder is a magnificent fantasy oriented track. It is telling a tale from far and unknown lands that lurk in a luminous haze and mystery.

"Lyrically this is my version of the story of three wise men and what they were looking for. I worked on the lyrics and music a lot and almost drove my girlfriend crazy at the time. Lots of sleepless nights in my one small room apartment in Uppland Vasby." he says. Just like any other track on this record, Black Stone Wielder is a carefully composed one and thriven with passion. It's creators put a lot of efford and dedication into it. None of the passages from this album was a template that you can simply put together and make a song. There was no "know-how" back then and all of these are handcrafted materials that swarm with creativity.

"A song that originally was named "in shadow of the cross". I worked on the verse quite a bit and eventually it became "Under the Oak" Leif says.

And for the people that have heard this track first time on Tales of Creation and think Marcolin did better, here what it's creator thinks. "I am okay with the re-recording of this song on Tales of Creation, but this version is so much better" he says. A raw and warm guitar tone is in the front line of this epic track it has become it's character.

This is my favorite track from this album and it is my favorite album to this date too. So this makes A Sorcerer's Pledge my favorite song of all times and the riff that begins at 02:46 is the best riff ever written to me.

"Johan had been listening to the songs only for a week or so and wasn't sure about how to sing it. With that in mind his performance on Epicus is even more admirable" Leif says.

Knowing that the vocal performance on this album is not planned at all makes this record an anomalie or a miracle in my eye. Whether it was mere luck or distinctive originality that made this album so good, and despite it's problems with preperation Epicus Doomic Metallicus still stand glorious among ruins, on vast plains and in derelict dungeons.

I always loved the keyboard arrangements around the intro and deemed it as a distinctive mark of epic doom metal style. It is a shame that modern epic doom metal bands that follow Candlemass don't rely enough on this type of usage of keyboards. [b9Keyboards are one on the core elemts that form it's epic shape and shouldn't be denied.[/b]

"This song is about a mad old sorcerer that thinks he can extend his life by drinking young virgins blood. To me he is like a cross between Dracule and the wizard Merlin" Leif says.

And last few notes from Leif on the album:

"Actually it was a miracle we managed to play in Thunderload Studios! It was bloody cold in the studio. We had to wear gloves in the recording room because the studio was placed below the subway at "Universitetet in Stockholm and we were there in the middle of the winter! Frost came out when we were breathing and the recording room was so damp! It was almost impossible to play guitar or bass or drums!" Leif says and maybe it was the cold that gave this bleak doomy feeling to this milestone.