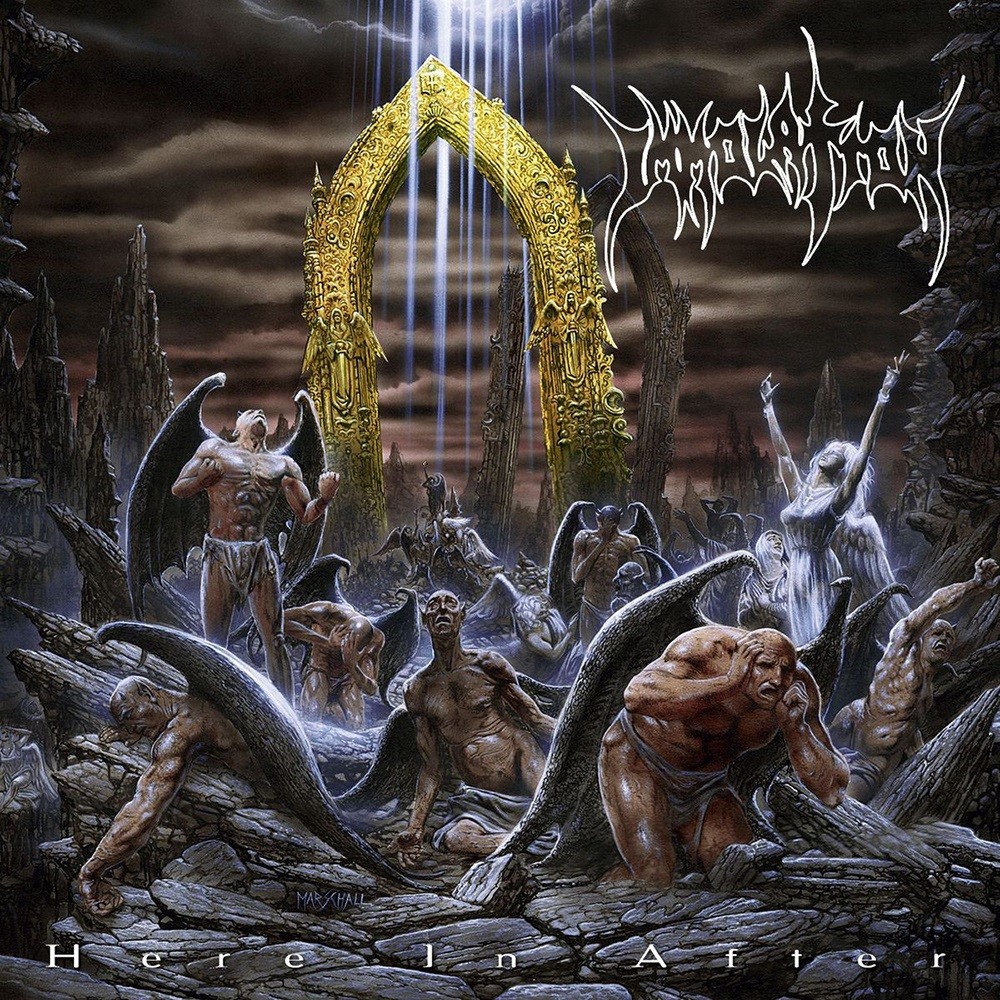 It sure was a long time between Immolation’s classic debut album Dawn of Possession and this follow-up. Five whole years passed by with only a compilation of early demo material (1995’s Stepping on Angels…Before Dawn) seeing the light of day. It’s not as though they had any line-up changes to deal with either as the same band members perform on both releases. Roadrunner ejecting Immolation off their roster (along with most of their death metal bands) could certainly have had something to do with it. There weren’t that many labels out there that were willing to take the risk of recruiting death metal bands as the genre was generally considered to be in decline by 1996. But I’m convinced that the real reason Immolation took 5 years to get their shit together and record Here in After is that they used the time to gain knowledge directly from Satan himself. There’s no other explanation that could lead to the sound that Immolation came up with for this album, and one assumes that this lesson in pure evil takes a considerable amount of time, not to mention some form of sacrifice to learn.

This album is nasty. I know death metal is by its very nature aggressive and hostile, but this is something else. Morbid Angel stepped up the evil with albums such as Altars of Madness and Blessed Are the Sick, but Immolation took it one step further here by producing a seriously oppressive and filthy sound. The production is raw and muddy, which certainly adds to it all, but it has to be said that the album would have benefited from a slightly cleaner sound, without sacrificing the tone at all. Robert Vigna and Thomas Wilkinson are the main men behind the menace, unleashing discordant and chaotic riffs all over the place. The mood they create is suffocating and just a bit violating, yet they keep things entirely in check, never letting their apparent technical prowess get in the way of good solid death metal. They hinted at this jagged, squeal filled sound on Dawn of Possession, but the subsequent years spent in Satan’s company clearly helped them fine tune it into a staggeringly brutal weapon. They were obviously proud of the result too as they’ve carried it forward on all future albums.

Craig Smilowski deserves a fair bit of credit too as his drumming really gets the most out of the riffs, even if the production doesn’t completely do him justice. It would be the last time he would perform on an Immolation album before Alex Hernandez would take over, but I can only imagine he left on his own terms as his performance here is far better than adequate. Ross Dolan’s vocals are brutally guttural as usual and suit the anti-Christian content perfectly while remaining entirely decipherable. He’s an underrated vocalist in the realm of death metal and is at the top of his game on Here in After. It should be apparent by now that I really enjoy this album, but it’s by no means perfect. I’ve already mentioned the production issues, but I should also state that not everything the band tries is successful. With so many crazy riffs and wild leads it’s not surprising that the odd section sounds a bit off, but there are far more hits than misses over the 37-minute running time. If you enjoy modern Immolation, then there’s no reason at all not to get Here in After.

Immolation are as I have stated elsewhere one of the more under-appreciated death metal bands of the genre.  For nearly three decades they have produced consistent releases, stamped by their unique sound and style that conjures a distinct sense of menace and threat whilst still retaining a high level of accessibility.  Taking their entire discography into consideration, their first two albums are the standout releases and there's debate aplenty about whether it is the debut or the sophomore release that is the finer moment.  Right now, there's very little in it for me with both releases offering their share of merit to both the band's development and the continued establishment of the genre that was considered to be on the wane by the time Here In After was released.

Taking the elements of the album in singularity inevitably draws you to the angular leads and complex riff patterns of the guitars.  But they also deploy clever use of melody to induce cheek-aching depths of melancholy.  Check out the wail of the guitar as Christ's Cage seeps into your ears, dripping in despair and despondency but so cleanly killed off by the fastidious riffing that adds urgency to the track as it gets going.  The next standout component for me are Dolan's trademark vocals; never quite dropping into bowel resonating guttural growls, they inhabit a gruff and yet intimidating space that offers the lyrics a sense of clarity and therefore a transparency to the levels of hatred being espoused for all things religious (I Feel Nothing).

Sticking with Dolan for a minute, his bass is also really obvious in the mix as it rumbles along in the background without ever becoming intrusive or overly "twangy".  At times I feel like we are listening to some Gorguts style structures but the bass never quite runs away with things and as a result there is a real feel of composure to the delivery of most tracks.  Finally, the drumming of Smilowski offers a consistent if not altogether that remarkable performance.  Amidst the furious blasting there are runs, flurries and fills that should really have me feeling their impact more but unfortunately they do feel to be the one victim of the mixing job and sit just that little bit too far back in the mix.

When you put all these parts together the sum is one that is brimming with compelling and pressing death metal that never feels rushed or hasty but retains an accessibility that makes its synthesis decipherable to most death metal fans.