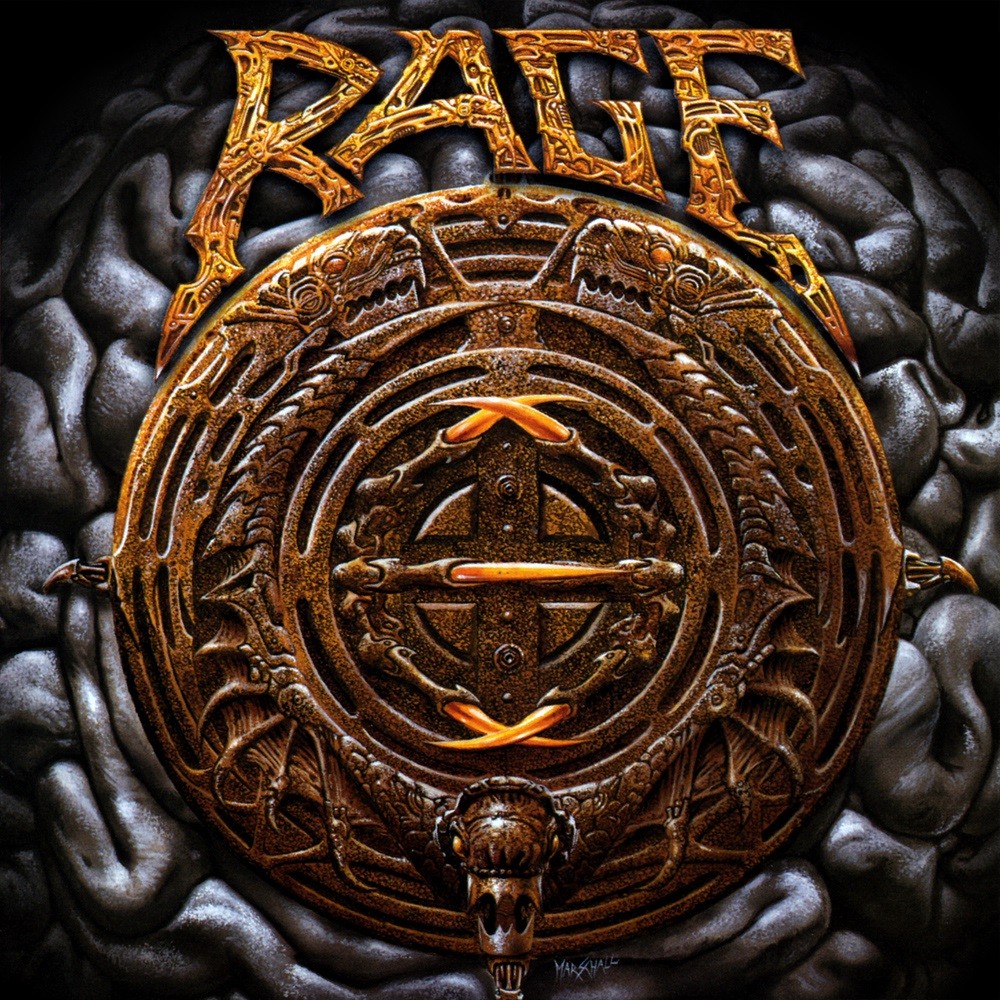 I imagine, since power metal is such a popular genre, that many non-power fans would be put off by the 70-minute runtime.  I know I was.  Then again, one of my desert island albums is 70-minutes long, but it was a very diversified album, so I couldn't be too quick to judge.  I played this after not having heard it for at least a couple of years.  Hell I haven't heard it since my second power metal album binge.  I had hoped that the length wouldn't ruin anything, as the album seemed to have a lot of different genre tags attached.

Rage just blasts in your ear right when the album turns on.  A very Kursch-esque singer, Peter Wagner, gets right on maximizing the capacity of his masculine voice without overdoing it.  This title track here is a full-blown THRASH SONG, and it blatantly shows, probably even too blatantly.  So I know heaviness isn't a problem, and if Rage knows what they're doing then they'll be able to keep up with the 65-minute album Black Hand Inn by Running Wild, which is very similar in genre, heaviness and tone.  "The Crawling Chaos," however, seemed like it was just continuing where the title track left off but with a slower tempo, so I didn't fall in love with this song.  Then "Alive But Dead" came on with its low acoustic intro and deep near-growls used in a rhythmic monotone.  It doesn't take long for the song to turn into a darker thrash metal tune, but the process of evolution is carefully handled and perfectly timed.  The song relies on mood and the mood is effortlessly brutal and full of the band's namesake.  "Sent By the Devil" is kinda monotone, which is a little annoying, but it's great to have speed play a major role in the song after a cool, slower-moving one and have the consistency of the album stay perfectly fine.  That's something Black Hand Inn didn't do.  But as far as writing goes, this is total filler, proving that the album is too long.

"Shadow Out of Time" picks the album right back up with its sense of angel and its rhythm.  Here the band focuses on trying to write something worth listening to.  The solo guitarist, however, seems more focuses on wanking on his guitar rather than focusing on the quality of the solo, and only when another guitar overlaps with it does it focus on melody.  "A Spider's Web" is only three minutes, and speed metal influence is obvious, with little hints of prog metal to give it a unique flair during the verses while the bridges and chorus are focuses on a punk-infused speed sound.  Honestly, this was the most impressive song thus far, and has the best solo of the first few tracks.  "In a Nameless Time" is a ten minute epic building itself on the monotony of atmosphere and effects, and once Wagner gets half-singing half-whispering, the slow thrashing begins before the thrashing bridge begins, and this cycle of verse and bridge continues into a melodic thrash-power chorus that progresses like a lyrical poem.  Obviously, darkness and mood are the dominant factors here, as the verses feel pretty doomy.  The midtro, however, is taken by acoustic guitar and violin for some sort of fancy "power epic" purpose, but it feels a little out of place, and that's the closest we get to a guitar solo in its ten-minute run.  However, once the thrashing starts up again, the heaviest part of the song begins, and the thrashiness is at level 10.

"The Icecold Hand Of Destiny" is a straight-up heavy metal song by every definition.  Decent rhythm, moderate tempo and lots of heaviness work for the song, but it doesn't stand out enough to be anything but filler, but the second half has a good guitar solo and the song gets a little proggy, so that's good.  "Forever" is a more straight-up power metal song.  Its opening riff feels exactly like something from an F-Zero game, notably GP Legend.  However, once the riff ends, the deeper guitars and thrashing drums take over, so I had to wonder how these two genres would mingle.  Once they did, the guitars playing the opening riff were too low-tuned and drowned out in the chorus to really matter, so the riff itself lost its effect, but the instrumentation and rhythms are still very good.  :Until I Die" starts with an incredibly rhythmic speed metal riff, and gets right down to the signature tropes of the genre, including tempo, layout and jam factor.  But considering how no other song on the album sounded like this, the surprise was pleasant.  The heaviness never once suffered.  It continues with "My Rage," which is more focused on being as heavy in guitar tone as possible, not relying on speed to express this, and as the shortest song on the album it doesn't get tiring.

"The Price of War" starts of with rhythmic thrashing which, I'd have to say, boasts some of the catchier thrashing on the album.  And this song has one of the best solos on the album, which is a big sigh of relief because guitar solos obviously are not a strong point on this album.  "Start" goes right back to the power metal sound that Rage is associated with, but it's a very standard song that I wouldn't repeat again.  And finally, we get to the finale, "All This Time."  Like many other power metal albums, this song acts like a ballad and even carries some symphonic influence in the mix.  It's doing whatever it can to be an actual ending to a lengthy album, and from a melodic and moody perspective, it does just that.  I wish, however, there were more songs like this on the album.

Honestly, I'm not sure why this is there most popular album.  It seems like the filler often gets in the way of it progressing as a noteworthy power metal album.  The heaviness is incredible, and that drives the whole album, and Wagner gives it his all in every song.  Let's not forget how utterly diversified the album is.  The issue here is that it's got such obvious flaws despite how enjoyable it is.  The solos aren't great and the filler is obvious.  Thankfully, there isn't A LOT of filler, and the pros are undeniable.  If you've got 70 minutes to spare, this album's worth checking out once or twice.

I guess the first thing to say is that I'm not a big fan of power metal. I prefer my metal to be aggressive and dark, and power metal often ventures into more upbeat and at times particularly syrupy territory. I only set about reviewing Rage's Black in Mind album due to the combined facts that it was listed on RYM as thrash metal and had a damn good rating. Yet while I've been listening to it over the last few days, the thrash metal genre has been voted off the album, leaving it (correctly in my opinion) listed as solely power metal. So here I am reviewing a power metal album, completely out of my comfort zone, but all the better for the experience.

Having never heard German band Rage before, I didn't know completely what to expect. I'm not completely surprised that the album has been getting a few thrash metal genre votes as there are numerous thrashy riffs popping up throughout. But the atmosphere and song structures are much more within the realms of power metal, with numerous softer "ballads" and slightly upbeat, almost happy tunes mixed in with the odd shredding. Some of the guitar work on the album is excellent indeed, with some great riffs and fantastic leads. The vocals are a bit of a mixed bag for me. Peter Wagner comes across as a mix between Dave Mustaine from Megadeth and the guy with the funny voice on Police Academy. At times he's really entertaining and then at others (mostly the softer sections) he's awful.

At 68 minutes in length, Black in Mind is certainly an endeavour to get through. But there are undoubtedly some entertaining tracks amongst the 14 on offer. The title track, The Crawling Chaos and In a Nameless Time are cool as are the riffs on A Spider's Web, but it must be said that there is a fair amount of filler alongside them. There just seems to be a section that disagrees with me within just about every track, but that's likely to be my personal preferences getting in the way. I'll give it 3 stars but if you're a fan of power metal, you'll want to add another 1 to that score. It's not something I'll listen to much, but I can see the appeal for sure.