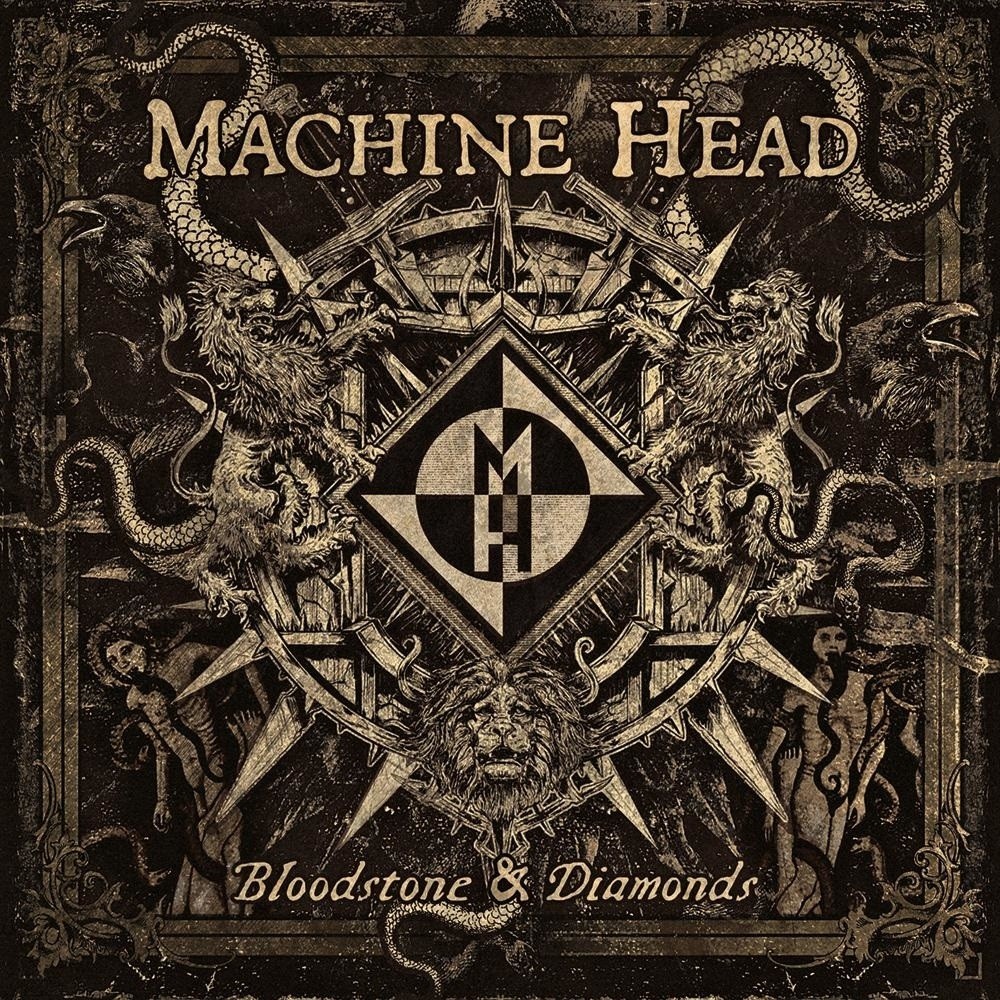 I just realized that the theme of my Ultimate Metal Family Tree extra-credit assignment is...last albums from a few bands before each one's change in style that is less tolerated than before; for myself, Coroner and Sentenced, and for other metalheads, Asking Alexandria and Machine Head. That's right, I'm reviewing Bloodstone & Diamonds, Machine Head's last groove/thrash metal album before their return to nu/alt-metal in Catharsis!

I probably would've reviewed the album before this, Unto the Locust, because of how epic people think it is, but I chose this album based on how much the band has lived up to since The Blackening ever since climbing the ladder higher album after album, ending their streak here. This would be their last album where the new stuff is tolerable...

First is the monstrously epic "Now We Die". This song has a stable structure never shaken by any repetition. Instrumental variety include the addition of violin harmonies used perfectly as vocalist/guitarist Robb Flynn continues his searing roars. Huge choruses soon lead to an unbelievable breakdown and soloing. All this great metal action and it's only their first song! Then there's the next track "Killers & Kings", which is harder, better, faster, shorter! Drummer Dave McClain blasts through the fast technicality with subtle cymbals to go with the bass. You might think a breakdown would hurt the song's flow, but that's not the case here. A thunderous breakdown is unleashed as a compliment instead of an insult. The music in "Ghosts Will Haunt My Bones" is pretty good where the bass playing of Jared MacEachern shines excellently and is never drowned out. He may be new to the band, but he plays as professionally as their alumni. "Night of Long Knives" greatly grinds through with fast riffs and solos, plus strong lyrical aggression to fuel the fire with the anger needed for their signature attitude.

"Sail Into the Black" is, at 8 and a half minutes, the album's longest song, but it's not as impressive as the first two tracks. The first half is just mesmerizing softness with subtle piano and acoustic guitar for dreamy atmosphere. Then the second half is the usual true Machine Head aggression. Then a couple more problems arrive starting with the repetitive "Eyes of the Dead". The other slightly problematic song "Beneath the Silt" is kinda interesting but could've been slightly shorter and more straight to the point. The war-like feel created "In Comes the Flood" mixed with political lyrics of rebel soldiers raiding the White House nicely help create the war theater in this album.

"Damage Inside" is a darker slower song showing Robb Flynn's soft sad cleans to fit with this short ballad. Then "Game Over" flips off the softness back to the band's true aggression. Samples from the Spontaneous Evolution audiobook can be heard in the otherwise instrumental "Imaginal Cells" brings interesting facts and mysteries to light. The great ending "Take Me Through the Fire" is heavily memorable with brilliant choruses and riffs to close the album in a groove/thrash metal bang.

All in all, this album is unbelievably great, and even though it's different from their prior two albums, it's definitely better in my opinion, and Machine Head did a splendid job there. A nicely recommended diamond in the rough bloodstone!

For all the hate I hear vented on forums at Machine Head for being "unimaginative Metallica riff copying pish! Debut rocks but been downhill since, blah blah" I wonder if there are actually 2 bands with the same name and I am fortunate enough to be hearing the better version of the two?

2011's "Locust" was superb - patchy towards the end but so full of energy and pure raw metal intensity that to recognise it as anything other than a top notch release is ridiculous. With Duce gone you could have been forgiven for thinking "Bloodstone & Diamonds" would be a sub-par effort made by a band struggling with the loss of such a key member. The departure of founding bassist Duce energised Machine Head and the new album was full of riffs, hooks, chops and (again) strings! It was balanced to boot, the romp being mediated by some effective and deliberate pace changes be that mid song or to build a track.

In terms of a mainstream metal album you will find nothing to rival this in the whole of 2014, Flynn has a direction and vision that he has kept going now for eight albums (at time of this release) and whilst "Bloodstone.." does little to reinvent the Machine Head wheel what it does do is cement the expectations fans have come to expect from one of metals long standing groups. Yes the song lengths do need a trim in places but this is never going to be "Burn My Eyes", anyone sat around waiting for another album on par with the debut needs to move the fuck on and realise that for any band in 2014 "Bloodstone.." is an excellent release. Recognise "BME" for what it is and celebrate it for what it was but to benchmark a whole career worth of releases against such an opening release is ridiculous and pointless.

Look instead at the glum. misery of "Sail Into The Black" or the epic proportions of "In Comes The Flood" and see that although the hints of nu-metal are still in the throat of Flynn or on the groove of some riffs ("Beneath The Silt" especially) this was a band matured and perfectly at ease with its standing in the world of metal music. The guitar work on "Bloodstone..." follows on superbly from the brilliance of "Locust" - I am a sucker for dueling six strings and so am very fucking happy with the widdly bits on display here!