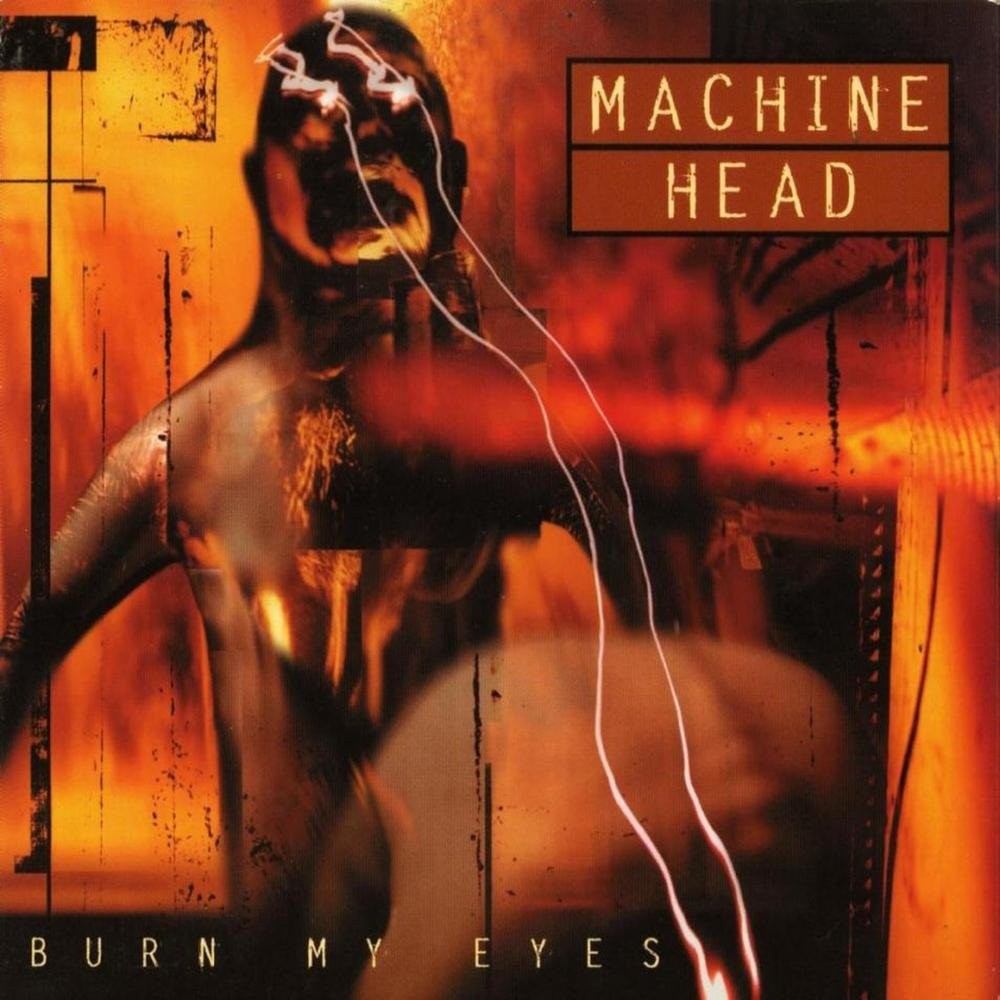 Entertaining groove metal album that should please all those Pantera fans.

Before I discuss the merits of Burn My Eyes, I'd like to state that Machine Head are not necessarily my type of band. This very American styled groove metal generally grates on my nerves, with the exception of two very good Pantera albums in the early 90s, and so I'm probably not the best person in the world to review a Machine Head album. Despite this statement, I can most definitely say that Burn My Eyes is a good album that I thoroughly enjoy despite my initial hesitance.

The band seem to get a fair amount of flak (just read some of the reviews on this site) for a lot of their work, and perhaps some of that is justified for their later releases. But Burn My Eyes has enough great riffs and grooves to keep just about any metalhead happy, so I think a lot of the negativity directed at this release is a little harsh. Apart from the great chunky guitar work, the drumming is also awesome, and Rob Flynn's angry vocals suit the music perfectly. On that note, it does make me wonder why Rob didn't offer his vocal services to Vio-Lence while he was part of that band, as their otherwise decent thrash metal was all but destroyed by a truly horrendous singer (if you can call him that).

It is true that some of these tracks overstay their welcome just a little, with many of them running close to six minutes in length. It's also true that after the incredible one two punch of Davidian and Old, the album struggles to reach those heights again. But I can't say any of the remaining tracks are bad and in most cases they're damn entertaining. The band change things up throughout the album and don't thrash all that hard for much of the running time, but every time things are starting to feel a little stale, they'll crank things up with a monstrous riff.

All up I'd say Burn My Eyes is one of the better thrash metal debuts to come out since the golden era (ie. 1980s) and anyone that enjoys Pantera will get a large kick out Machine Head. I can't speak for any of their later albums as I haven't spent any time with them, but this debut is well worth your while. Highlights for me are Davidian, Old, A Thousand Lies, The Rage to Overcome, Death Church and the thrashing Blood for Blood.

The early 90's was an odd time for metal. With most of the previous decades heroes being driven underground, going through a phase of substandard releases, or shamelessly trying (and failing) to latch onto the grunge scene that was taking the world by storm, heavy metal needed some fresh new faces to take the reins and steer the genre to pastures new.

With groove metal bands like Pantera standing tall, hardcore heroes like Biohazard bludgeoning their way into the action, and later bands such as Korn and Limp Bizkit taking the music in totally different directions, there was one band that fused elements of all these subgenres together, and so with the immortal lyric of "let freedom ring with a shotgun blast" did Machine Head burst onto the scene.

With some very fat, grooving riffs, plenty of middle-finger attitude and hard-hitting lyrics, Machine Head exemplified metal in the early 90's, when fans were care-free and passionate, ravenous for the next headbanging anthem. And there's plenty of 'em here! 'Old', 'The Rage to Overcome' and 'Davidian' (one on the bands best songs), are all reasons why Machine Head would be one of the bands to usher heavy metal into the post-grunge era of modern music.

The album does plod along at times and comes across as repetitive, which is why it only gets a three-star rating from me. Robert Flynn's vocals suit the music perfectly, although the overuse of harmonics (and in particular, stabs in the music with harmonics filling the gap) does become a tired trick after hearing it in the third or fourth song. But overall this is a solid debut, and 'Davidian' is easily one of the finest metal songs to come out of the 90's, so it's a damn good album just for that.

This is the album that seemingly half the fan base of early nineties metal have been waiting to be followed up for over 25 years now.  Rarely do I hear conversation or read reviews of Machine Head output post this record that doesn't mention the debut.  "This ain't no Burn My Eyes!" is one such common comment as if there is a genuine expectation that anything is ever going to match one of the most impacting and meaningful releases for most fans growing up with metal in the nineties.  As is perhaps human nature, the success of a band at one moment in time becomes a stick to beat them with in years to come.

The majority of criticism that gets levelled at Machine Head is justified in my book, not that there is anything wrong with a band exploring new avenues and directions but with Flynn's unpredictable nature there is always a threat of you just not knowing what is coming next whenever a record release from the band is announced.  This (aside from the fact that I believe that Burn My Eyes was a one off record anyways) should be evidence enough that the debut was never going to ever get followed up in the strictest sense of the term.  Instead we should celebrate the brilliance of the debut as opposed to chaining it around the neck of the band like some wearisome burden.

By the time this record was released I had been into metal for five years and things were just starting to get a little stagnant for me.  Nu-metal was in the early stages of development and I had already decided it wasn't going to interest me that much.  Virtually every penny I earned went on vinyl, CD or cassette and my shelves in my bedroom were stocked full of everything from Pantera to Morbid Angel, from Bon Jovi to Judas Priest and I felt like I heard everything.  My liking of Pantera was what I recall being the thread that lead me to Machine Head's debut album. A Vulgar Display of Power had been a big influence on my taste in terms of groove metal and Burn My Eyes seemed almost a natural progression for me.  The record felt fresh, brimming with angst-ridden energy and brooding violence.  It sounded like how I (and no doubt every teenage metal fan at the time) wanted their own band to sound like if they ever started one up.  It was equal parts catharsis for the moody teenager as it was unbridled vehemence for the older hormones floating around in my blood at the time.

The tracks just stacked up like a string of devastatingly powerful wrestlers making their entrance one by one into some all out royal rumble.  It was most definitely an album that in 1994 I would have awarded five stars to.  A quarter of a century's worth of hindsight has seen the number of stars diminish as my tastes have changed and I rarely come back to this record with any regularity nowadays.  I still stick to my point earlier on in the review that this record should be celebrated for what it delivered to both me personally and the metal genre as a whole at the time.  It is still a brilliant and very important album.