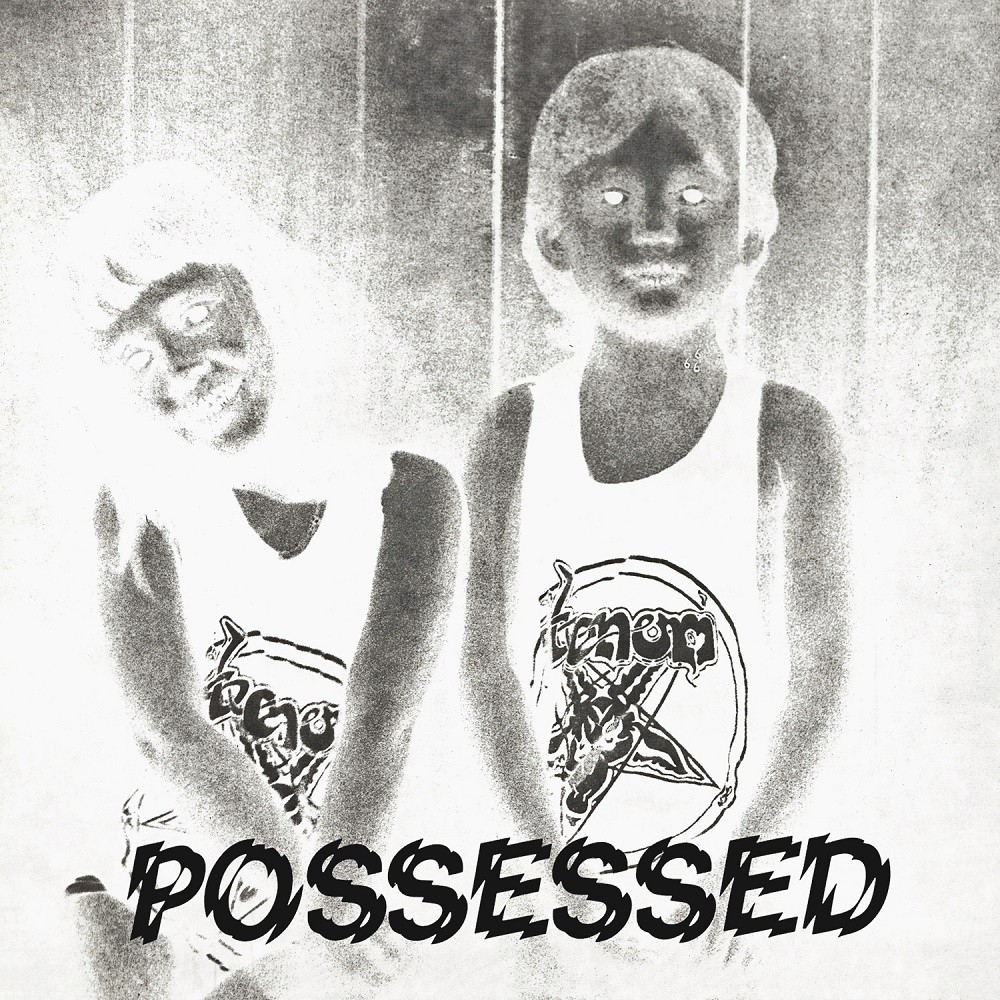 Venom... The band that invented black metal, evident in their first 3 albums; Welcome to Hell, Black Metal, and At War With Satan, the second of which inspired the name of the genre. They are the center of 3 things I generally try to avoid; classic standard speed metal that I have no interest in, black metal that I try to finger-cross away, and the early 80s that past my taste year range prime. Well of course they invented black metal, but it's mostly just speedy heavy metal, just super sayin'...

After their (in)famous satanic black metal-inspiring trilogy, fans of those albums started to think this one, Possessed, is where the band descends into sh*t and p*ss. This album might now have the band's earlier savagery, but I think this still sounds pretty good. The holocaust of deadly black shall please some masses!

The album begins with "Powerdrive", a song that would definitely newer bands of speed/power metal (DragonForce? Maybe...). This song is absolutely made for metalheads to headbang. I've heard that song is the best Venom album opener since the debut's "Sons of Satan", but in a more controlled but still killer manner. I would be curious, but I shall spare my religious side, thank you very much! "Flytrap" continues the speed metal, but in a calmer tone that would have other 80s metal acts sound like sh*t in comparison. There's also a funny solo that you gotta hear to believe. "Satanachist" is not as memorable as the previous two, but once again fast and killer. "Burn this Place (To the Ground)" is a faster slaughter despite the lack of coherence in songwriting.

Then we take off into the infectious beginning riff of "Harmony Dies", a cool song with catchy verses and a solo that would have you imitating it until your air-guitar goes up in smoke. The title track is midpaced with the lyrics and vocals by Cronos being focused on more than the riffing. The verses get intense before the headbanging chorus ("I am possessed by all that is evil"). Other than that, the song is pretty generic. Also it's one the PMRC's "Filthy 15" at #14. I think the lyric "We drink the vomit of the priests, make love with the dying wh*re") was enough to make Tipper Gore vomit. "Hellchild" is another wild speeder and one of the best in the album. "Moonshine" is another song welcoming you back to their debut Welcome to Hell, but with generic riffs brushed aside by nice rhythms. Another great solo comes on to continue your air-guitar skills until the strings break. Then there's a better ending.

"Wing and a Prayer" is a well-composed instrumental that is faster and worth headbanging to. "Suffer not the Children" is another typical speeder, but that title though, THE F***!?! What's up with that!? It seems like younger kids have turned into a****les being rewarded for doing G****MN NOTHING in their pitiful lives!! Is one of those rewards the chance to appear in this album's artwork (drummer Abaddon's son and producer Keith Nichol's niece). "Voyeur" has some worse moments. "Mystique" has some mystical moments, like the weird beginning aura, disappearing when Cronos' vocals continue. "Too Loud (for the Crowd)" is a nicely loud song brought down by the miserable chorus.

So despite never wanting to taste the venom of Venom, I think of Possessed as a good 80s metal album. Venom fans should really get this. I would tell non-Venom fans to f*** off, but that would be rudely hypocritical because I'm in that category. This album is not totally bad, but I politely decline the invitation to the band's old satanic Hell....

The third album from Newcastle’s black metal pioneers Venom (1984's “At War With Satan”) hadn’t exactly set the world on fire. Venom had played an almost unparalleled role in the creation of extreme metal with their first two records; 1981’s “Welcome To Hell” & “1982’s “Black Metal”. But a change of direction towards a more slightly cleaner & substantially more progressive approach hadn’t pleased their many fans & critics so the pressure was on for them to release something that was more in line with the public’s expectations. Personally, I very much enjoyed “At War With Satan”. In fact, I regard it as my favourite Venom album to that time so I can’t say that I would have agreed with the common consensus that the band should return to their roots but I guess I lost out in that argument because, on the evidence of 1985’s “Possessed” album, the band were listening to the market & delivered a product that they believed would alleviate the concerns of those disgruntled fans.

The cover artwork features a photograph of two young children sporting Venom singlets but it looks like they’ve just taken the negative of the photo which creates an eery & quite demonic looking result. The boy shown here is actually drummer Abaddon’s son while the girl is producer Keith Nichol’s niece & I think the image has the desired effect as it nicely ties in with the album title & the band’s evil image but doesn’t look too flashy. The record would again be released through Neat Records who front man Cronos had a strong affiliation with after working there for many years, & producer Nichols had been responsible for producing all of the Venom albums to date so it would have been a comfortable recording environment for the band.

But the result of the efforts would seem to be a strange outcome really. From the very first second of the opening track it becomes plainly obvious that Venom have returned to the dirtier, grimier sound of their first two outings, only this time they’d pushed the threshold a fair bit further as the production on “Possessed” could only be described as atrocious. The rhythm section is far too loud in the mix (particularly the drums) with Cronos seemingly struggling to find room for his vocals & Mantas’ fuzzy rhythm guitars being completely lost in the mix although his solos are often afforded far too much volume & come across as completely overpowering at times, despite the fact that there are no rhythm guitar tracks underneath them. All of this leaves a good portion of the tracklisting sounding like a complete mess with the unbalanced mix ensuring that Venom’s already fairly loose performances would struggle to obtain anything close to cohesion. But I don’t think that any of this was just bad luck mind you. I’d be very surprised if the band & their management hadn’t decided to employ as dirty a sound as possible in order to try to recoup some of their lost street cred following the failure of “At War With Satan” to fully capture acceptance from the underground metal market.

As with the production, the song-writing has returned to the shorter, simpler style of the band’s early material with 13 songs being included on the tracklisting. Fans would have felt that the combination of Motorhead styles rock ‘n’ rollers, up-tempo speed metal bangers & more traditional heavy metal numbers felt quite familiar as it was nothing new for Venom. Drummer Abaddon still can’t play his instrument with his excessive volume in the mix helping to further highlight his obvious technical deficiencies. Particularly in the double kick work. It’s pretty surprising that he hasn’t improved more over the four years since “Welcome To Hell” but perhaps that’s been contributed to by the minimal amount of live shows the band had taken part in by this point in time. I’m not sure it really matters though as these inadequacies are half the fun of a Venom record. But in saying that, the improvement in Mantas’ lead work is quite striking. His solos are now much more accomplished & he doesn’t shy away from showcasing his newly found chops. Unfortunately for him, I do think that his more refined & melodic approach does clash with Venom’s overall image a bit. Cronos on the other hand, is his usual charismatic self & his overall contribution is high quality. Particularly his powerful bass playing which sees him portraying a new level of confidence in his instrument that’s only enhanced by his excessive presence in the mix.  Unfortunately his vocal performance is substantially nullified by the very same production flaw & this leaves Venom’s main attraction sounding noticeably muted.

“Possessed” would receive mixed reactions from fans & critics with even the many die-hard fans of Venom’s earlier works struggling to get onboard with the new material. The common consensus online seems to be that the band had lost their mojo as far as the song-writing goes but I disagree with this theory. I honestly don’t think the quality of the song-writing is anything majorly different to what we’ve heard from Venom before. It’s just that it’s not presented in an appropriate fashion with the hooks being lost in an inadequate lo-fi production job which highlights Venom’s weaknesses over their strengths. I mean a lot of this material was actually written before “At War With Satan” ever hit the shelves so you shouldn’t expect any major overhaul of their traditional style here.

Sadly, the failure of “Possessed” to make the commercial impact that the band had hoped would signal the end of Venom’s classic period & also erased any chance of them going on to be held in as high a regard as the thrash heavy weights they’d influenced. This was the critical moment for Venom’s careers & they blew it. It would appear that Mantas could see that because he left the band to pursue a solo career shortly afterwards but not before Venom could record one more studio album in the as-yet-unreleased “Deadline” record. Mantas would return to the fold a few years later but it’s well documented that he was unimpressed with the result of the “Possessed” record.