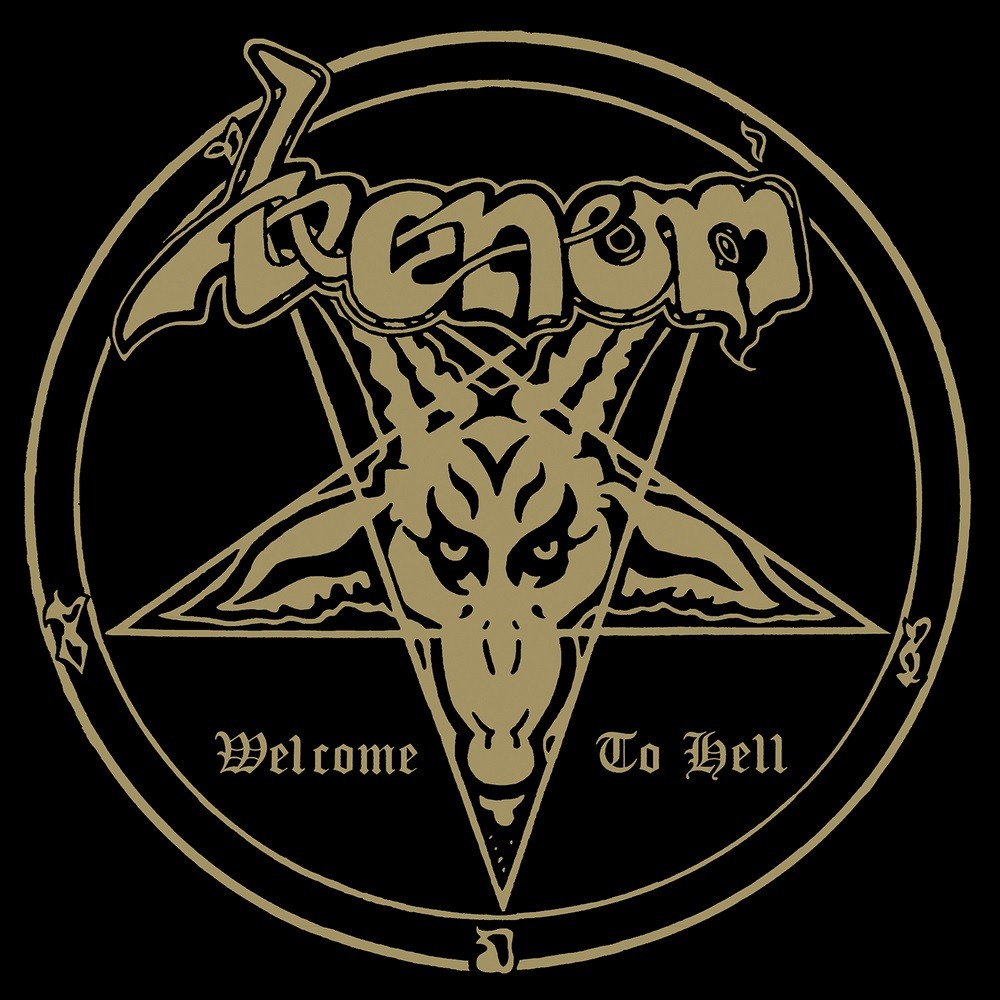 As with many visionary metal bands, Venom were derided mercilessly in their early days. I remember the UK music press (including Kerrang!) lambasting them at every turn as a band that couldn't even play their instruments properly. Of course, those same people have no recollection of ever having done so and claim to have been supporters of the band from the outset - hypocrites. Of course Welcome to Hell sounds sloppy, but that only adds to it's charm. The album took the speed metal of Motörhead, added some cartoonish satanic imagery (that later bands took FAR too seriously) and then went at it with a youthful enthusiasm born of the UK DIY punk scene. In fact, with his north-eastern accent Cronos often sounds like the legendary Mensi of The Angelic Upstarts.

Newcastle-upon-Tyne, in common with most of England's northern cities, was a grim place to grow up in the seventies and early eighties, but where the punks took out their frustration with songs about how shit everything was, Venom sought catharsis and escape through songs based on Dennis Wheatley books and Hammer Horror movies. Bold, brash and full of balls, this was an album that was made by a band who clearly did not give a damn what anybody thought about them. Often lumped in with the NWOBHM, I would argue this has far more in common with Discharge, GBH and The Exploited than Iron Maiden or Saxon, but they were too punk for the metal crowd and too metal for the punks, so for a long time had to plough their own furrow with only their diehard fans for company. The band's outsider cred is what probably endeared them to the even younger up and coming bands they influenced including Metallica, Bathory, Mayhem and the band probably closest to them in term of attitude, Darkthrone. I would argue that without Motörhead there woud never have been a Venom, but certainly without Venom there would not have been a black metal scene as we recognise it.

Of course the album shouldn't only be judged on it's historical importance. Any fan of high-energy, down and dirty speed metal, particularly in the vein of Lemmy and his crew should love tracks like the title track, Witching Hour, In League With Satan and my personal favourite, Live Like an Angel (Die Like a Devil). All hail Venom, the outsiders of the outsiders and the patient zero of extreme metal.

Venom get way to little attention nowadays in my daily album listening.  As such I tend to forget how important they are in weaving the very fabric of extreme music that dominates my digital library as well as my physical copies that frequent the shelving in my lair.  By the time Venom released their debut we had already seen five Motörhead records, two Iron Maiden albums and nine Judas Priest records.  The numbers are important here, I don't just quote them for statistical purposes.  Of the seventeen albums cross the three bands mentioned, arguably Welcome to Hell was the most influential on the more extreme sub-genres of metal, taking the speed metal elements and sloppy songwriting and putting in the foundations for a whole new expansion of heavy metal in years to come.

Listen to this record and you can hear where Bathory got their vibe from; that murky sound, low production value, intense and adversarial attitude and a non-chalant, tongue-in -cheek undertone to it all.  Welcome to Hell is performed by three lads with no fucks to give, having a great laugh and perhaps unknowingly shaping the future of one of music's loudest and most obnoxious genres.  Going into this review I found a reissue with several demos, singles and outakes that takes the record to a twenty-two song Venomfest which I have gorged upon for the past two days.  Listening to some of the demo and outake tracks it is obvious that this was a band living their best life.  Writing deliberately provocative lyrics and noisy as fuck arrangements to maximise the shock factor.

And this is what needs to be taken way from the listening experience more than anything.  Forget for a minute how influential an album it is.  Put down the microscope and stop analysing what sub-genres and sub-cultures it created.  Instead appreciate it as a record full of unbridled and unrestrained aggressive metal passion, delivered by three young musicians with obvious but not excessive talent aimed at doing nothing more than enjoying a good time and not caring two shits who they pissed off in the process.

What do you get when you cross New Wave of British Heavy Metal, early Motörhead adjacent speed metal, and the original hardcore punk scene of the 1980s? Well you probably end up with a band like Venom and their legendary debut record Welcome to Hell.

Now for an initial playthrough, that might seem like a lot to digest. But Venom are not only able to pull off the best elements of each playbook with fluidity, but they also managed to create an album that has stood the test of time remarkably well! To be completely honest, I had never listened to this album in its entirety prior to writing this review, but I immediately recognized some of these tunes as soon as they began playing, without being aware that they were Venom songs. That is a true testament to this bands legacy.

Of the three branching genres that I could recognize while listening to this record, NWOBHM is the tag that I would attest to this album the least. In contrast to other artists who were releasing similar sounding music around the same time, Venom were far more crunchy than their contemporaries. The riffage on "Welcome To Hell", "Poison", "One Thousand Days of Sodom" and "In League with Satan" is unlike anything you would expect to hear on those early Iron Maiden and Diamond Head records. The vocal timbre is less power metal and more thrash, the riffs are faster and more distorted, the hooks are less anthemic, but somehow resonate just as effectively. Perhaps the tag of Speed Metal would make more sense.

But I hear a lot more distortion and alienation from Venom than a group like Deep Purple or Motörhead. No, the genre that I tagged Venom as was Original Hardcore Punk. While bands like the Dead Kennedys, Black Flag and Bad Brains were gaining attention in the United States, Venom were taking that sound and implementing it over these NWOBHM/Speed Metal compositions and it sounded phenomenal. The albums starts with "Sons of Satan" and while the hooks might not be there, the fast tempos are. The distorted riffs are very powerful, and anchored by some very solid bass, while the vocals is howl-singing, like you would hear in Black Flag or Bad Brains.

But what separates Welcome to Hell from other Hardcore Punk albums of the eighties is its forward thinking. While you might not hear it initially, Venom were stoking the flame for a new generation of metal. One that took it to the extreme, literally. "Witching Hour" and "Red Light Fever" are the basic foundations of black metal with its tremolo riffs, relentless percussion groove and howled vocals. Throw on top of that all of the Satanic imagery and scattered atonal soundscapes found throughout the project and you'll find a lot of appreciate here.

Upon listening to Welcome to Hell, I quickly realized how much gross influence this album has had within heavy metal, as well as how wide of a range its intended audience is meant to be. Is it Speed Metal? Is it Hardcore Punk? Is it Black Metal (no it isn't, but the recurrent themes do bring an interesting point)? No matter what angle you view this album from, Venom's debut record is one for the ages.