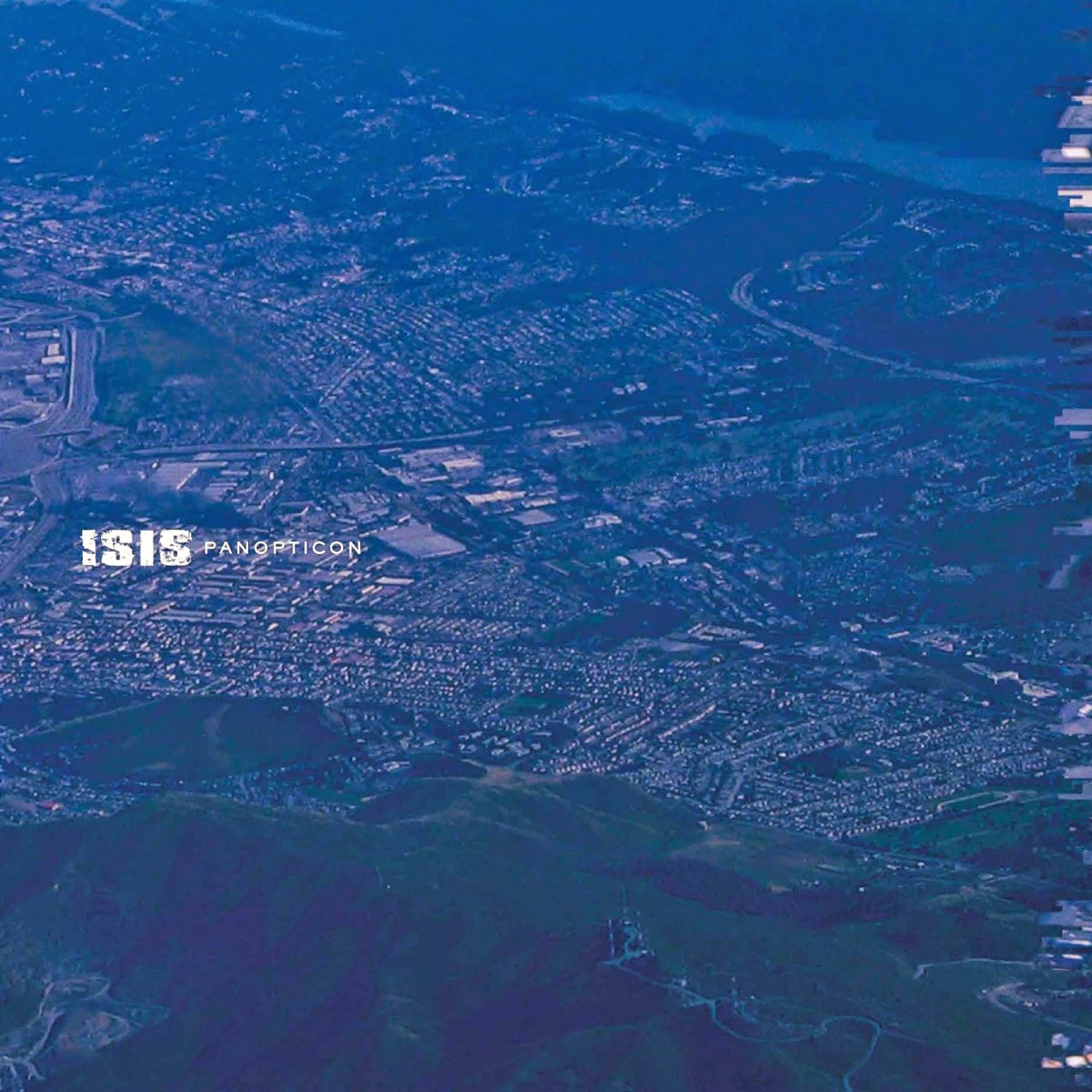 Metal is the object of much sneering from the elitist arbiters of cultural worth, probably due to it's blue-collar origins and appeal and general lack of liberal bias. In the past it may well have brought some of this dismissive attitude on itself, but since the turn of the millenium there have been a number of metal bands who are not content to merely rehash the same metal tropes and to elevate their work beyond a mere collection of songs, but rather to use their musical songwriting to produce pieces that can be considered as being actual art. Isis are one such band, emerging from the sludge metal scene, they began adding layers of atmosphere and more subltle sonic textures to the sludge-inspired heaviness, until, by the time of Panopticon, the album was more like an aural oil painting, composed of varying shades and textures of sound to make an imaginative and atmospheric whole that transcends the restrictions of the scene that originally spawned them.
At times meditatively calm and gentle, at others febrile and raging, the light and shade of human emotion are laid bare in musical form, this interpreting of the human condition being one of the central tenets of what makes good art. This, in common with the rest of Isis' work (and atmospheric sludge in general) is not really for the casual listener and is one of those albums where you get more out, the more you are prepared to put into appreciating it.
Now I'm not claiming this to be any revelatory work of unparralelled genius, in fact I actually prefer previous album Oceanic, but I think that albums like this can only enhance the reputation of metal music in the wider world outside the genre's diehard adherents and as such should be heralded as taking metal to a new level of cultural significance.

Let me take you back to 2004, a year in which two monumental sludge metal albums came out, but took the genre in two very different directions. The first is Mastodon and their album Leviathan, one of the most accessible and universally legendary albums of the 2000s, perhaps even the entire 21st century at this moment. On the other side you have ISIS and Panopticon, an album that dives more into the post-metal and atmospheric sides of doom/sludge metal. Both albums are heralded as all time greats by those who have heard them, so this begs the question, who was more influential?

Well if we go from a mainstream point of view, that answer is Mastodon. They have been the flag bearers for modern metal in the 2000s and even followed up their 2004 album with one that is objectively better with Crack the Skye. ISIS are coming off of one great album with Oceanic and deliver atmospheric bliss.

As a result, their songs are long and drawn out as opposed to many of their contemporaries, making their music much less accessible, but influenced many great similar sounding post-metal bands later on, including The Ocean and Cult of Luna. But much like their step siblings in the black metal scene, ISIS are much more for creating an environment that is brimming with melodic ideas and phrases from the lead guitar, vocals, and even bass lines (on a track such as "Wills Dissolve")! I love how the album begins with "So Did We", an excellent indicator that this isn't going to be a dirge-fest. When "In Fiction" comes on later in the track listing, the vocals don't enter until about half way through, however the slow build to a release is pulled off so well. A true indicator that this group has been focused on creating anticipation, as well as re-routing the listener's expectations.

Now when you have an album like this, where dynamics are key, it becomes integral for the production to sound really good, and this sounds excellent. The guitars always seem to draw albums like this back, specifically modulating from soft to loud. With this, the guitars sound full and gritty, without sounding like they have simply been turned up behind the mixing board. The drums are also sound very developed as well; like with the guitars, dynamic control from Aaron Harris is on complete display instead of feeling like simply being turned down by the producer later on.

I will say that like with many post-metal albums in a similar vein to this one, while the extended sections do sound nice and build up to some incredible highs, this album (and the individual tracks themselves) can get a little tiresome after a while. I really enjoy "In Fiction", but it is very easy to get lost in the extended intro as it builds in what feels like a snails pace. Also, I do wish that the group would have implemented Aaron's vocals more than they did; it would have made for some incredible payoffs on tracks such as "In Fiction" and "Altered Course".

I really do enjoy when heavy metal groups decide to take a pre-existing genre and add progressive/post-metal elements to it and Panopticon is just that. Although this would have been expected at the time considering the sky high expectations following Oceanic. There is a reason why this album is revered in the heavy metal community by those willing to take the dive in. This is an experience that should not be missed.