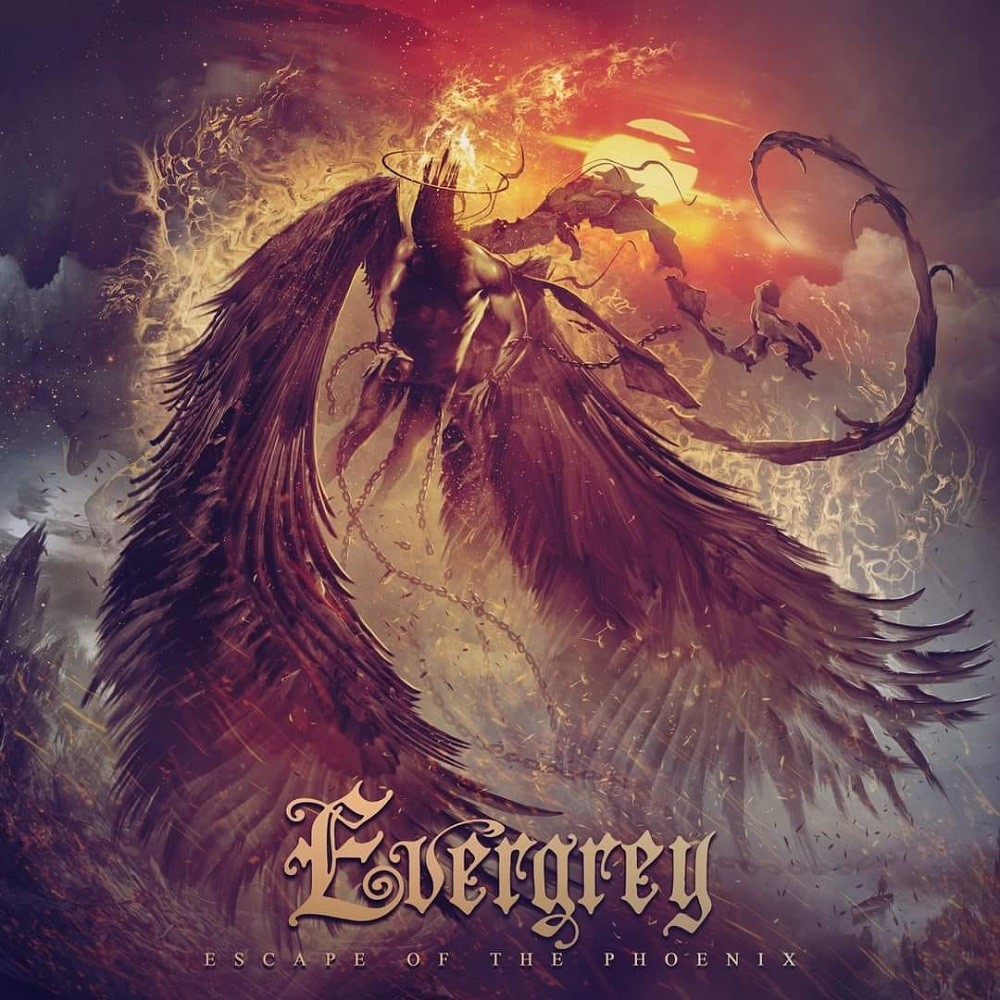 Is it any surprise that Evergrey have been left behind by so many in the progressive metal/power metal scene's within the last ten years? As this band gets older, their power metal has become much slower and has been incorporating more prominent djent elements, meanwhile the bands very plainspoken progressive metal focus has become very tired over the years, and many have moved on to something that is more showoff-y and technically impressive.

But for those of us in the loop, Evergrey have been making some remarkably consistent albums over the past few years, even despite a brief hiccup with The Storm Within back in 2016. They did progressive pirate metal with The Atlantic in 2019 that almost made me forget that Alestorm existed. And following the bands thematic rain period, the ashes are now given their chance to burn brightly.

The question is how brightly do they light up the night sky? I would say about the same as the bands last album. This album is more brooding without going full on post-metal; many slower tracks that use gradual building through dynamics and melodic growth. You won't find much in the way of modulating time signatures or wank guitar solos. But the songwriting and the development of the melodic phrases and ideas from the band are well executed and never feel stale. Even on the albums worst moments, which I would argue are "Eternal Nocturnal" and "Run", they happen to feature unique song structures that still make them standout on their own. But most importantly, these tracks all sound like they belong together. There is no dramatic whiplash effect from one track to the next on this album. For a band to be able to pull that off with such efficiency is commendable.

The albums weakest moments are less so full songs, but rather moments within each song. Some songs feature extended djent breakdowns which I was never a fan of on The Atlantic, the synth leads on this album sound like they have gotten worse since the last album, fortunately they only end up serving as minor speedbumps on songs like "In The Absence Of Sun" and "Stories". And while the bass/fundamentals on this album are very solid, it still suffers from the progressive metal/djent "problem" of having an overmixed kick bass drum.

But overall I do like Escape of the Phoenix. I think that Evergrey have fully recovered from their misstep of 2016 and have found themselves a very nice solid ground of easily accessible progressive metal, especially for those approaching this from a power metal background. The songs are nice and fluent, they never feel like they are overstaying their welcome, the album does not run out of interesting ideas, and it all fits together into a very nice package. It's a bit of a shame that this band has been so overlooked throughout the years. Perhaps we can help this Phoenix rise again.

After my review for The Atlantic, I just knew the time would come for me to review Evergrey's newest album, Escape of the Phoenix! While this marks Evergrey's first album to not to be part of the conceptual trilogy of their previous 3 albums, the band's epic voyage continues...

It was around 2014, at the time when Hymns for the Broken came out, that I first started listening to Evergrey. What sets them from other bands apart is the unique progressive power metal sound with slight doom elements, filled with melody and drama. It might not be for everybody, but I kinda selectively like some songs and albums, some of which have more emotion than their prog-power metal roots.

Right at the start, "Forever Outside" begins the band's amazing race through the album with dark aggression and heavy energy. They've picked up the aggression from The Atlantic, including the down-tuned guitar. There might be slower songs to come in better pace than the half-boring half-incredible The Storm Within, but not as super-great as The Atlantic. I didn't think "Where August Mourns" would be so beautiful, but it is, with deep texture. The keyboards subtly work through the verses to balance with the heavy guitar. The chorus is catchy with successful appeal, but the bridge and solo make a beautiful gem. It feels like guitarist Henrik Danhage can get me moved with his beautiful expressive playing without ever going as technical as Converge. "Stories" is a good ballad of accomplishment. The intro is so beautiful, and the beauty bleeds into the rest of the song. I sometimes feel how misused the length is for the ballad, but the bridge is lasting enough to keep it a good song. "Dandelion Cipher" is my favorite song here, both the title and the song itself. The energy oozes through the song for real prog-power metal. It's not complex, but the groove melded well with the melody.

I admit how a bit boring "The Beholder" is, but I don't mind waiting some time for more punch. What I like is the solid guest vocals by James Labrie (Dream Theater) that counterbalance with the croons of lead vocalist Tom S. Englund. I also didn't like "In Absence of Sun" a lot when it first started because I had enough of the ballads and wanted something more upbeat. However, as the song went on, it greatly but slowly builds up into a great climax that is needed before the speedy energy of the next song... "Eternal Nocturnal" is simple but kicks a** with its rad groove riffing and memorable chorus.

For the title track, here's what I think; title tracks have to be really good and summarize what the album sounds like, and this one lives up far beyond what I was expecting. This is the heaviest song of the album and probably by the band! It continues the good guitar tone of the album, heavier and darker than the band has gone before while keeping the melancholic atmosphere and emotional melody. You would definitely bang your head to this song until you fling your face clean off. "You from You" isn't really remarkable, but a solid break between headbangers. "Leaden Saints" is an AMAZING SONG with the best riffing and most undeniable groove that would have you not only banging your head but also your a** harder than if you're doing a "booty scooty" whether you want to or not. The song is remarkable with memorable verses where neat vocals flow over relentless groove, along with a phenomenal chorus and incredible solo that would have you coming back to this song many times. That song itself deserves 5 stars! I also respect the band for the beautiful album ending "Run", which might be difficult to decide whether it is a good ending or not because one moment that's a fast verse, and the next is a slow emotional chorus. Either way, the band has won another amazing metal race!

So will Evergrey release another album in the future? Most likely if all goes well, but the final Before the Dawn album having a similar title has me slightly worried. Is there any other band that can greatly balance powerful songs and ballads? Probably not. Escape of the Phoenix might not be perfect but it made a great impact for metal this year!

For what it’s worth, I’m admittedly a fan of the new style Evergrey has broken into, starting with 2014’s Hymns for the Broken and, according to them, culminating with 2019’s The Atlantic. Slowly but surely Tom Englund’s riffs have been tuned lower and lower, to the point where I’d consider the tone and chug structures to almost be full blown Djent, but they’ve hung onto enough of their other keyboard and vocal performance aspects to become quite a unique group nowadays. Although there isn’t much progressiveness left in their sound, they’ve successfully carved their own little notch in a more anthemic, drop-tuned chug riff style that I think suits them rather well. I really enjoyed my time with The Atlantic so I figured that Escape of the Phoenix would be another solid album, given Evergrey’s relative consistency, but they may have repeated themselves a bit too much here.

I feel as though I was fortunate to skip over most of Evergrey’s 2010’s material, since I wasn’t as burned out by their relatively samey output when I checked out The Atlantic. Coming into Escape of the Phoenix with any sort of expectations kind of ruined it though, because this album is very much a direct continuation of their previous album without too much else going for it. Englund’s riffs and vocal melodies are as strong as ever, if not also predictable as ever. Even though it’s hard for me to hate their base sound, Escape of the Phoenix doesn’t have the same album progression that has gripped me on some of their previous releases. The riffs and choruses of “Where August Mourn”, “A Dandelion Cipher”, “Eternal Nocturnal”, "Escape of the Phoenix", and “Leaden Saints” stand out so much more than the rest of the album, while “Forever Outsider”, “Stories”, “In the Absence of Sun”, and “Run” fade into the background as mostly filler tracks. “You from You” works as the standout ballad and guitar solo and “The Beholder” surprised me immensely with a James LaBrie feature that actually sounds fantastic as both vocalists harmonize incredibly well with one another. If there's one win that I can take away from this album, it's that it gave me some modern day material that I can say LaBrie sounds fantastic in.

Escape of the Phoenix is very much a mixed bag, with the great tracks making the others completely obsolete in comparison. That being said, having 6 great tracks and 5 completely mediocre ones comes out to be a net positive in the end, so I can't be too upset. Evergrey had much better album flow than this in the past, with the nautical themes and stories of The Atlantic grabbing my attention much more than the same old musings about someone carving their own path through this treacherous world. Fans of Evergrey’s sound will definitely be satiated by all the catchy choruses and effective drop-tuned riffing, but Escape of the Phoenix left me feeling a bit empty. Englund’s admittedly great vocals can only write so many similar anthemic choruses until the charm starts to wear off, so I suppose I’ll have to see where Evergrey stands for me in a few years from now with their next one, because this one has already started to chip away at my patience.