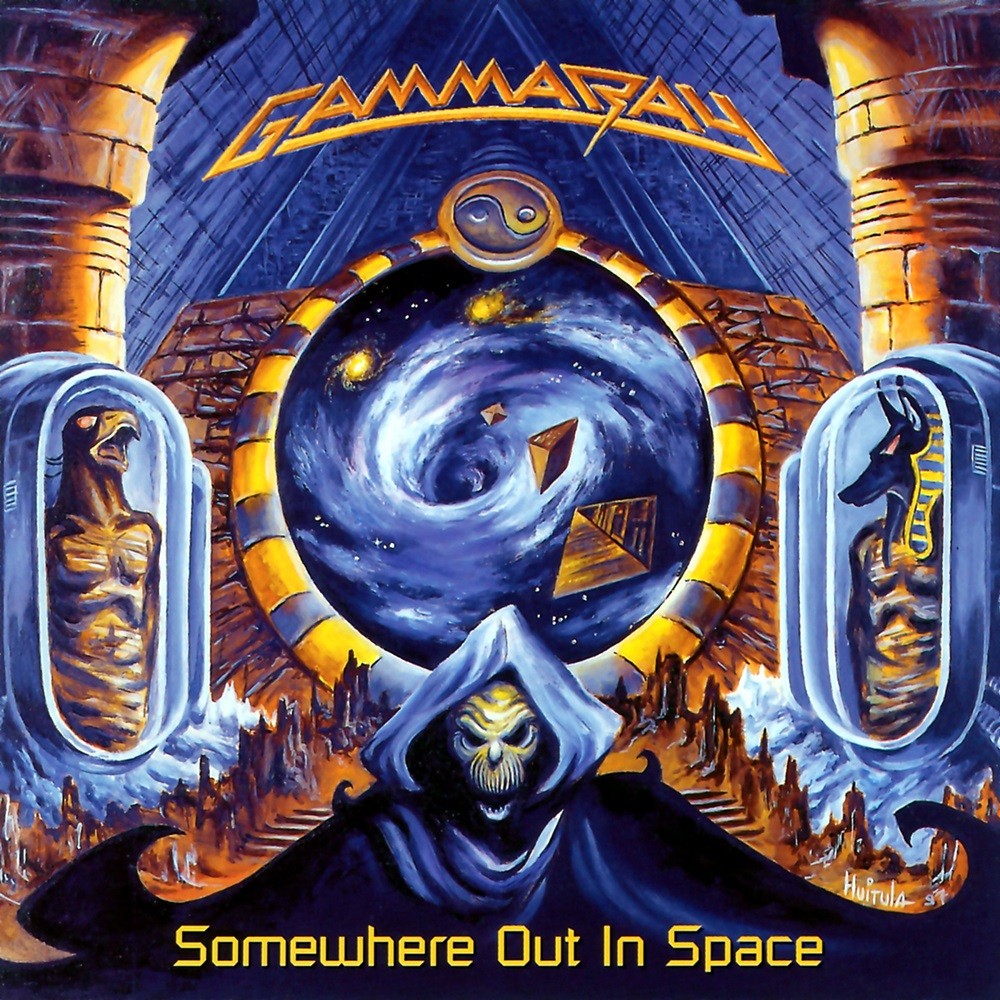 You can very well know how unbeatable Gamma Ray has been in 1995's Land of the Free and the 10 years since then, an exciting yet bizarre run since guitarist Kai Hansen took over the singing. My reviewing goal has been to review the 4 albums that were made by the end of the 20th century (including the compilation album Blast From the Past) to witness the most impressive energy they've had. With those aforesaid albums done, this young reviewing man is already halfway through his mission! Somewhere Out in Space saw a new lineup that would stay intact for a decade and a half creating an ambitious extraterrestrial concept album. This is their own "Somewhere in Time"!

Despite keeping their power metal name, the heavier weight of metal would hit the listener at the start of the album. While the fun balance of melodies, rhythms, and vocals are around, they pack more punches and smacks than a gym-addicted boxer in a match against his naughty kid. New drummer Dan Zimmermann shows a great example of that power on his drumkit, adding greater impact to the otherwise subtle emotion. Meanwhile, his bandmates stay strong and bold through the speedy neo-classical-ish riffs.

The greatness of the band returns for this album with "Beyond the Black Hole" with moments such as between the second chorus and solo, having ragged bass machinery. Soon it leads to operatic vocal fury, then at the 4-minute mark, the guitar and percussion erupt heavier than Gojira (the monster, not the band) for fiery leads. Following this is "Men, Martians and Machines" with powerful rhythm in the chorus. "No Stranger (Another Day in Life)" settles things down as a catchy mid-paced tune. More of those tooth-drilling moments can be found in the thrashy title track, my favorite of the album. The riffing fits so well with Gamma Ray's then-newfound E-flat tuning. The Helloween-inspired "Guardians of Mankind" is worth playing in your car radio in full blast during a nighttime highway drive. This anthem is packed with high vocals and an uplifting chorus, as the guitars and keyboards speed through. If any of you think that song is poor and generic, it's no wonder that kind of power metal can be struggling for you. That song, despite the sci-fi lyrics, epitomizes the whole definition of European power metal.

"The Landing" might be considered a very short power metal song of wasted potential, but it prepares you as an intro for what comes next... The melodic "Valley of the Kings" plunging from space to the pyramids Star Trek-style, is actually one of the most memorable and catchiest tunes in the album for me, but that's probably just my earlier power metal taste talking. However, the ballad "Pray" is a true disappointment. Sure there is emotion, but it doesn't have enough strength and is left in the barren cold. If it wasn't for that sh*tter, I would've given this album a perfect 5 stars. And if you think the long 7-minute "The Winged Horse" would be bad as well...it isn't, in my opinion! This 7-minute epic once again defines the power metal melody of Gamma Ray and would inspire younger soldiers of the genre. The guitar tone dazzles through in wonderful surging speed that should be worth chasing. "Cosmic Chaos" follows as a pointless drum solo, but it's not as awful as that ballad.

"Lost in the Future" continues the melodic thrashy madness of the first 4 tracks, but that bizarre bridge though... Anyway, the intensity and unexpected moments are what make the album enjoyable, the former especially with the screaming guitars and vocals, as the leads are in stark contrast with the rhythm section. "Watcher in the Sky" was borrowed from the debut album of Kai Hansen's other band at that time Iron Savior, and it has brooding verses. "Rising Star" is the interesting prelude to the album's epic finale... "Shine On" is basically half-heavy half-ballad. The first half is the usual speedy power metal, whereas the second half is a sentimental ballad. Fantastic ending to this album! Unless you have the Japanese edition with the storming bonus cover of "Return to Fantasy" by Uriah Heep, which I would definitely recommend.

Somewhere Out in Space does not entirely reach the glory of Land of the Free, but it's a great album that shows how unbeatable they are. You might get tired after that hour-long listen, but it's worth it. The formula of melody and intensity would continue in their next few albums. In the meantime, this album is a great one to pick up from space!

Favorites: "Beyond the Black Hole", "Somewhere Out in Space", "The Guardians of Mankind", "Valley of the Kings", "The Winged Horse", "Lost in the Future", "Shine On"