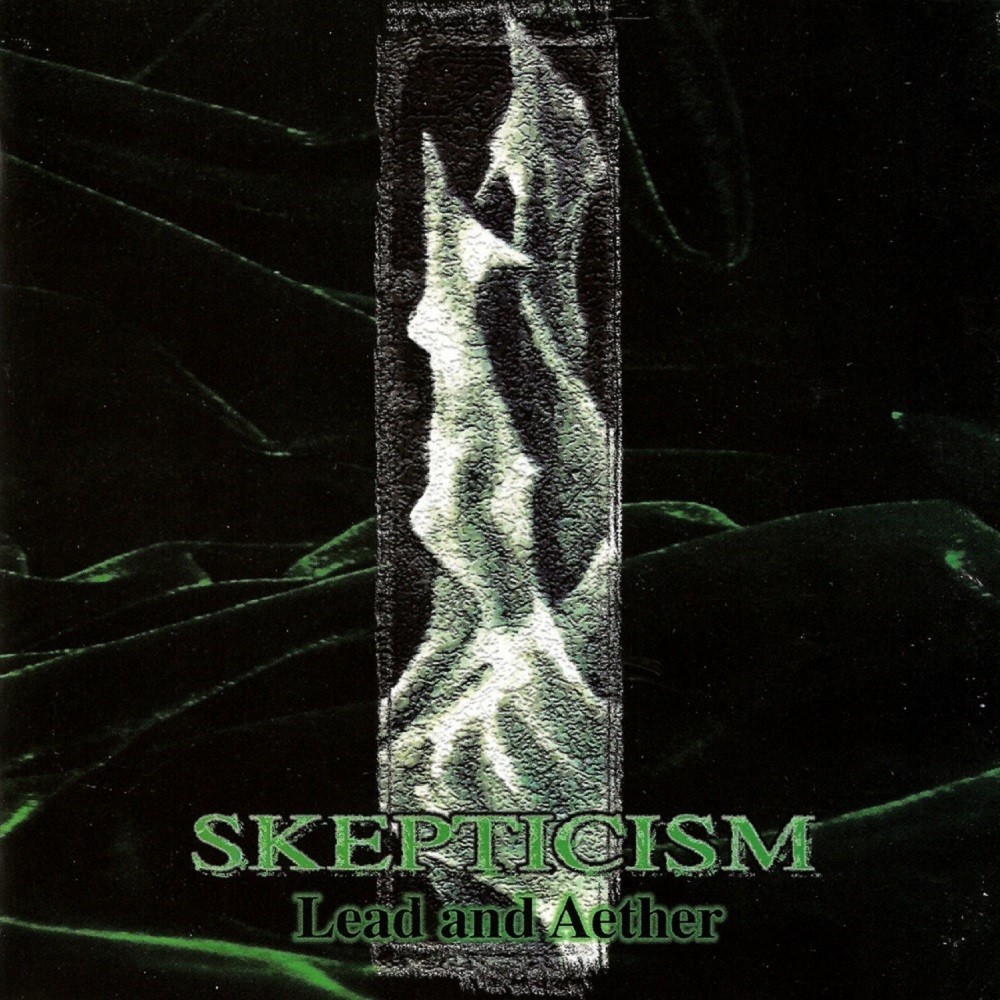 Very little is known about the ways of Skepticism and the Finnish brains behind it. I normally start my reviews by exploring the context of an album, focusing on whatever relevant information I can find regarding the band’s movements that might help in judging the expected outcome. Due to all the secrecy surrounding this funeral doom metal band and the limited information available, I can only focus on the music alone, which I’m sure is exactly the way they intended it. Starting off exactly where they left off on the accompanying Ethere EP, Lead and Aether is really a continuation of what came before it. The album even begins with the same organ composition that finished Ethere in a purposeful attempt to link the two releases. Once opener The Organium kicks in though it becomes apparent that the production has been given a boost, with the muddy, distant rumble of the debut replaced by a comparatively clear and powerful sound. That inimitable grandeur that Skepticism seems to create at whim is well and truly present however and the atmosphere is devastatingly thick within less than a minute’s playing time. There’s something primordial about Skepticism that connects with me on a deep level, despite explanations of their methods often painting a picture of a dreary monotony. It may be plodding and repetitious, but the result is unique and affecting.

Second track The March and the Stream is simply put, one of the finest examples of funeral doom metal in existence. Having already appeared on Ethere, this track was already destined for greatness, but Skepticism took it one step further, building Lead and Aether around a vastly different take of this haunting experience. It’s clear that the version of The March and the Stream found on Lead and Aether is the “true” Skepticism version, with typically elongated, heavy riffs and church-like organs combining with the colossal drums that give the track such an epic atmosphere. That’s not to say that it’s the superior of the two though, as the sparser, and strangely touching, piano infused version found on Ethere is just as effective. I’d probably call it a tie and am perfectly happy to listen to what is essentially the same lengthy track on both releases. The other track to reappear on Lead and Aether is closer Aether. This time I can’t say there is all that much to differentiate the two, with only the gradually fading, acoustic accompanied close on Ethere being replaced by a rather abrupt stop on Lead and Aether, standing out as a noticeable difference. It’s a good track regardless, but its inclusion perhaps negates the value of Ethere, which would be a shame given the other track that makes up that EP, Chorale, is such a beautiful Skepticism piece.

The remaining three tracks on Lead and Aether are of a typical consistent quality for this band, not really venturing far from the slow moving yet epically grand procession that worked so well on their debut Stormcrowfleet. The organ still plays a major role, with the riffs often used to give weight to proceedings rather than taking centre stage. Matti’s indecipherable growls and the wonderful battle-like drum sound merely add to the majesty that pervades the entire album. Despite all the plaudits I’ve thrown at Lead and Aether in the past couple of paragraphs, I’m not going to go as far as giving it a full five stars. The main and only real issue I have with it is that it occasionally slips out of my attention zone. So often when I put this album on, I find myself enjoying the first ten to twenty minutes immensely, before suddenly realising that another twenty has gone by without me really noticing. If I forcefully give my undivided attention to all six tracks, then Lead and Aether is a fantastic experience, but it’s almost too comfortable (comforting?) at times to the point where my mind just wants to drift away. Of course, this could be seen as a positive rather than a negative with the album successfully achieving its hypnotic goal, or maybe it just doesn’t quite do enough to remain enthralling for the entire forty-seven minutes. Either way, there’s no denying that Lead and Aether is an essential part of any funeral doom fan’s collection.

Skepticism were formed in 1991, releasing a death metal 7" in 1992, before a change in sound resulted in them, along with fellow Finns Thergothon, being credited with the development of funeral doom metal. In 1995 they released their debut, the seminal and oft-praised Stormcrowfleet album.

This, their follow-up to that genre-defining release, consists of half a dozen tracks of exceedingly slow and oppressive-feeling doom metal. The tracks range in length from six to ten minutes, but the all-enveloping, smothering nature of the music makes them seem longer (in a good way). The sound is seriously downtuned, with slow, deep, drum beats, as if some unnamed titan's heart can be heard beating in the bowels of the earth. The vocals are barely distinguishable as such, sounding like the grating of a huge block of stone as it seals the entrance to a subterranean tomb, blocking out all light with it's bulk. The keyboards and guitar are more subdued than is usual but I don't feel that this album is particularly melancholy or depressing, but it projects more of an ancient martial atmosphere that may feasibly have accomanied the passing of a company of war elephants as they leave on a march to conquest.

There are quite a number of similarities between this and the aforementioned Thergothon's Stream From the Heavens and both albums can justifiably be held up as the standard against which all other funeral doom releases are judged, epitomising all that this style of extreme doom is about. They both are able to project epicness and true heft with, what is essentially, a stripped-down style of metal.

As an interesting aside, the band released an EP, Ethere, around the same time that has alternate versions of a couple of the tracks from Lead and Aether, The March and the Stream and Aether which seem starker and less oppressive than their album counterparts. Both versions are great in different ways and make the EP a very worthy companion piece to the full-length.