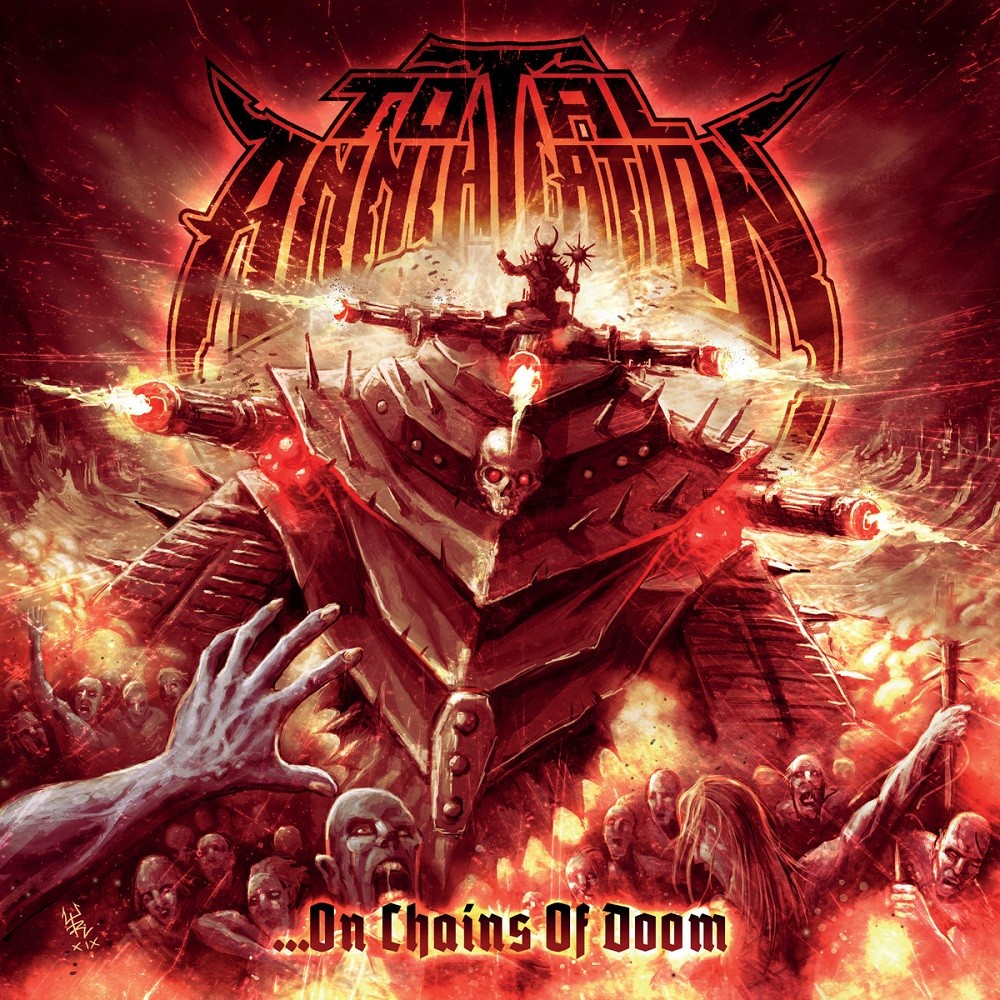 First off I've got to say the production on this album is first rate - the sound is crystal clear and every instrument can clearly be heard - in particular there are a couple of early moments when the bass shines throught to great effect, at the end of opener Falling Fast and during the chorus of Reborn in Flesh. The guitar sound is crisp and the drums have a great "snap" to them.
The songs themselves are fairly aggressive death/thrash, borrowing heavily from the Kreator template and in this comparison is sowed the seeds of TA's destruction, because compared to the Teutonic giants this will always come off second best. The songwriting is decent, if not earth-shattering, but to be honest it's virtually impossible to sound original playing a fairly limited style of metal like thrash after nearly forty years of the genre's history.
The vocals, whilst being mainly well-suited to the style are just too similar on every track. A slower track like the first half of Dead Souls for example, would really benefit from a different vocal style - Daniel Altwegg's delivery seeming to limit what is the album's standout track. In fact Dead Souls is the track that gives me some hope for the band as technically the members are all exceedingly proficient, but it seems like the songwriting (along with the vocals) are limiting them. However Dead Souls proves that they have it in them to write excellent thrash metal and if they can produce more in this vein then they can yet put out a great album.
As it is, this is good, if somewhat predictable, aggressive thrash metal from a band I feel are capable of more and I seriously hope they manage to take that extra step up.

Why do I get the feeling that Total Annihilation are Kreator marks? One only needs to look at the cover art for the bands 2020 album ...on Chains of Doom and they will find immediate callbacks to the great Kreator output of the 2010s (Phantom Antichrist and Gods of Violence). And then the album starts and the comparisons continue into the music itself. And I've never been opposed to worship like this, as long as the artist in question does enough to separate themselves from their influences.

Total Annihilation have a much heavier sound in general with huge riffage and pure harsh vocals instead of the hybrid vocals of Mike Petrozza. They are also not as strong songwriters as Kreator. It has its moments for sure; songs like "Dead Souls", "...On Chains of Doom" and the closer "Black Blood" are well constructed with more than enough unique ideas that keep each track interesting, as well as making the pure thrash sections more efficient. Beyond that though, I did not find that much that separated "Reborn in Flesh" from "Iron Coffin" to "Tunnelratten".

The album sounds nice. Production is fairly solid throughout even if the bass/rhythm guitar independence is lacking. Bass drum is not overproduced, guitar solos are sparse, but have a significant impact when they appear, the vocals are pummeling with force and while this is still a thrash album, the riffing is not the main focus of those tracks. The rhythm guitar does sound a little tinny at times, but the bass gives it life.

Overall, I think that ...on Chains of Doom is a respectable thrash metal album in the 2020s. It has some positive moments that make it stand out from its influences, the production is mostly solid, and the intensity is there. But beyond that, too often do I listen to this and think "Wow, this is something that Kreator would have left on the cutting room floor five years ago!" And while I'm sure this is inevitably my negative bias towards modern thrash metal, it still does not excuse the fact that I can't tell this album apart from Phantom Antichrist at least half of the time.

As a fan of the more intense European thrash metal sound, last year's third album from Swiss five-piece Total Annihilation (entitled "...On Chains Of Doom") ticks a lot of my musical boxes. It's beautifully produced with a seriously brutal guitar tone that's more in line with death metal than it is thrash. It's also very tightly executed with the band working well within their technical limitations to give us a relentless brand of thrash that's not afraid to slow things down for some crunchy doom style sections on occasion. Front man Daniel Altwegg has a grindy & fairly monotonous European style of vocal delivery that keeps Total Annihilation firmly situated in the underground & the total run time is just about right for a modern thrash record. So it's needless to say that I quite enjoyed "...On Chains Of Doom".

What's stopping me from reaching for the higher ratings is a few things. Firstly, the composition is lacking in ambition & the construction of the riffs is relatively basic which brings some of these tracks an element of heard-it-all-before. The song-writing is also a little lacking in the way of memorability with none of these tracks standing out as particular highlights despite only one track falling short of an acceptable standard (see "Experience The Terror"). And finally, the guitar solos are very ordinary & don't really serve much of a purpose as they don't enhance the music in any way. It's pretty obvious that this is merely a technical limitation & if I were in the band I would have advised against including them at all.

But, all criticisms aside, "...On Chains Of Doom" is a very heavy & generally enjoyable thrash record that makes up for its flaws with pure aggression & a good understanding of what makes underground thrash special. In fact, I'd take it over the more highly regarded 2020 Warbringer & Hexecutor albums we featured recently.

For fans of Legion Of The Damned, late 80's Kreator & "Agent Orange"-era Sodom.

Some fifteen years into their career, Swiss thrashers Total Annihilation are only up to full-length number three. Indeed, last year’s release was their first for eight years and although I have no idea why such a lengthy absence occurred from the band it is obvious from the off that …On Chains of Doom is a record that is put together a band who know their stuff to some degree.

Perhaps predictably for me, I chose a band who play that more intense death/thrash style of metal for my first featured record on MA. That having been said, opening track Falling Fast has some passages that rely on the heavier side of that death/thrash sound and Daniel Altwegg performs in the death metal realm of the vocal spectrum. There is no high-pitched squealing from him as per a David Di-Santo for example, instead his gruff and slightly guttural tones impress a consistency that unfortunately becomes one of the albums challenges, but more on that later.

Riff wise, as you would expect, this is a chuggfest of a record. The tempos are driven well by the twin guitar attack of Nicholas Stelz and Jurgen Schmid, with the former giving some stellar sonics as well as the recognized lead guitarist in the band. He is absolutely superb on Tunnelratten with a blistering solo, full of energy and brimming with flair and talent.  The guitars in general sound clear in the mix without feeling blunted by the production and the drums thunder along nicely in the background albeit a little too far in the background, to the extent that they lack some degree of presence in proceedings. Even on slow-burner Dead Souls which builds and builds they seem to be a tad muted overall.

Despite the variety of pace and tempo on the record, I do not feel overly excited by much of anything I hear. On the aforementioned Dead Souls, the band build up to a good track of powerful and groovy metal but the build up just sounds redundant and almost stagnant at times. It is like they flog the concept as opposed to develop it and what should be a standout track on the album comes off as a let down overall.

Looking at that artwork I am expectant of a full-frontal assault but in fact I end up with the odd sortie into battle with little in the way of heavy shelling or machine gun fire. To keep with the war theme, it is an album that is more of a sniper than any artillery personnel. It takes pot shots at ideas it thinks it can hit and whilst it usually hits the target so to speak the penetration of the bullets only goes so far and the fire patterns are predictable. This leads me back to my earlier comment on the vocalist. If you are going to use this vocal style, then the consistency needs to be tempered by something, anything, to create sufficient distraction and avoid monotony setting in. Despite the obvious quality of the guitar work here, it is not enough to defer attention away from track after track of the same vocals and so the band are reliant on changes of pace and tempo in writing songs that whilst they try to develop and build, do not always deliver.

The two singles that turned me onto this record to check it out in the first place are by far the stronger of the eight tracks. Reborn in Flesh is a memorable blaster of a track and Black Blood continues to play to the strengths of the band. Other than that, penultimate track Tunnelratten is the only other real standout track with it’s clever variance of pace without the sacrificing of any energy.  It is these three tracks that save this album in all honesty and if the band can consistently hit the vein of form displayed on these tracks then they will realise their full-potential I am sure.