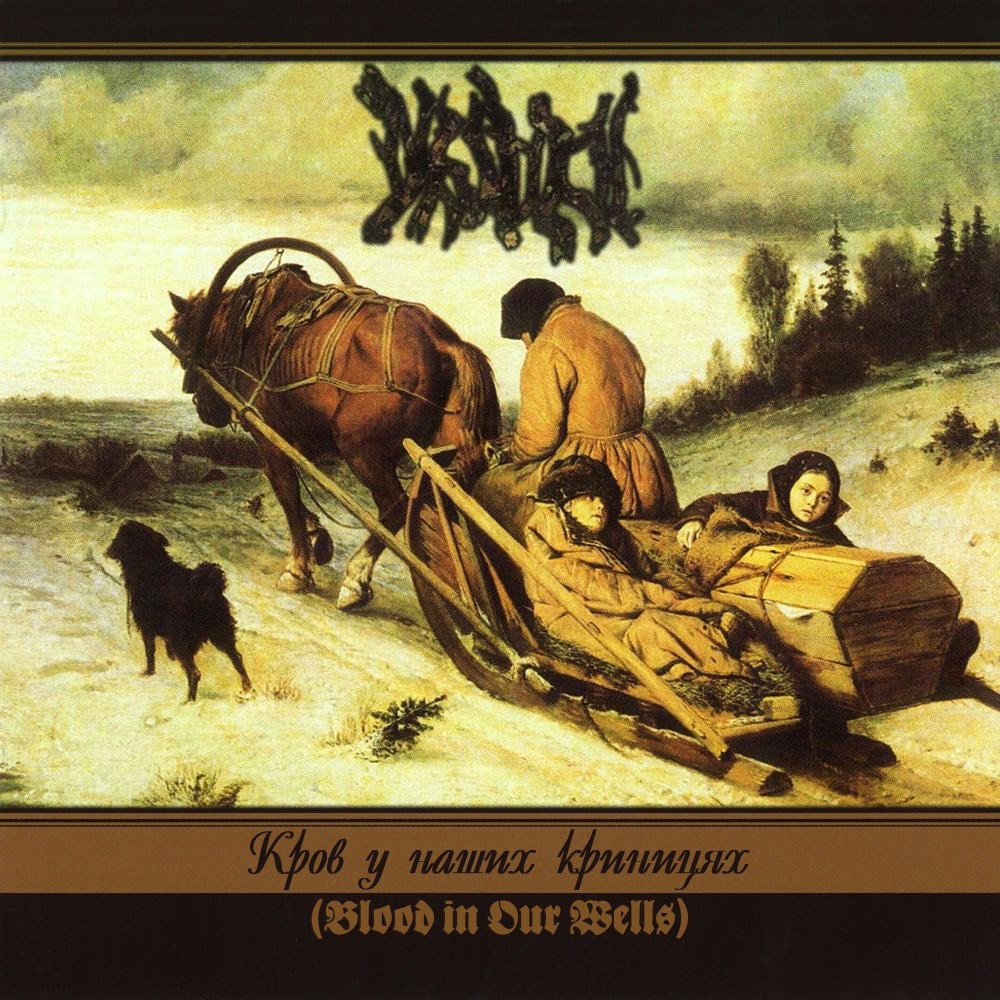 I wasn’t what you’d call an early adopter of Ukrainian atmospheric black metal exponents Drudkh as I didn't become aware of them until my return to metal in 2009 & by that stage they’d already released six or seven full-length albums. I seem to remember 2004’s “Autumn Aurora” being the first of their releases to grace my ears but it wouldn’t be long before I’d venture forward to their highly celebrated 2006 record “Blood In Our Wells”. I remember it leaving me quite impressed at the time & it subsequently got a fair few revisits over the coming weeks however I don’t think I’ve returned to it since so its finer details are a little bit hazy now to be honest. Hence this overdue revisit I guess so let’s see how it’s faired more than a decade later, shall we?

A well-executed ambient piece opens proceedings before the first waves of lush, sweeping black metal hit your ears & “Furrow Of Gods” begins very strongly, ably assisted by a clear, immersive wall-of-sound production job. Some well-placed keyboards provide further emphasis to a dreamy atmosphere that relies much more heavily on melody than it does on intimidation & blasphemy. Unusually for black metal, dualling guitar solos enter the fray & show the musicians responsible to be more than capable in that area. Unfortunately, the closing stages of the nine minute piece take a direction that I’m not terribly comfortable with as we see Drudkh experimenting with folk melodies within the context of their metal framework. I immediately put my guard up but thankfully the damage had already been done earlier in the piece & that kinda sums up my feelings on the album to an extent. There are definitely flaws here that I find a little off-putting but the overall package is impressive enough to overcome them. “When The Flame Turns To Ashes” is another example of this as it once again starts out very strongly but loses momentum towards the end of its eleven minute run time through the use of some melodic guitar work that could have shown more attention to detail given that the top strings are slightly out of tune. It’s by no means a bad track. It just doesn’t quite live up to its potential.

On the positive side though, “Blood In Our Wells” finishes very confidently indeed, firstly with the most surprising inclusion on the tracklisting in “Eternity” which sports a rockier first few minutes that seem to have been inspired by gothic rock artists like Sisters Of Mercy before returning to more serious territory in the back end. I found that opening section to be a little off-putting on first listen however subsequent revisits have found me giving in to its infectious & more up-beat nature. As is not unusual for me though, it’s the least popular of the metal tunes that has made the biggest impact on me with closing instrumental “Ukrainian Insurgent Army” dishing up some truly spine-chilling guitar arpeggios that owe a great deal of debt to Burzum. It was a great way to finish a very consistent tracklisting that offered no genuinely weak inclusions.

The blackened vocals of Thurios aren’t the most compelling you’ll find in the subgenre. They’re more serviceable than they are gripping but they get the job done well enough. I often find myself reaching for Rotting Christ as a point of reference across the course of the album & I think it might be Thurios’ vocal style that’s the main similarity. Vlad takes a restrained approach behind the kit so as to give the melodic guitar work as much room to breathe as possible & it works pretty well. I do enjoy his ride cymbal work but I don’t think it’ll surprise too many of you to read that I prefer a more exciting brand of extreme metal drumming than this. I guess I’m just taken outside of my comfort zone on a number of fronts really but Drudkh have still managed to win me over through sheer focus & quality of execution. I mean the folkier moments certainly detract from the overall experience for me a touch but they’re really not all that prominent or regular so the Pagan black metal tag is bit of a stretch. I've never been much of an advocate of flashy solos in my black metal either but they seem far more tolerable within the context of Drudkh's less aggressive & abrasive tone.

There's little doubt that I prefer a darker atmosphere than the one Drudkh are pushing here which almost hints at a dreamy positivity I’d usually associate with the blackgaze movement but somehow it all seems to hit close enough to the spot to still command a very solid 4/5 rating. At the end of the day I just think “Blood In Our Wells” is a quality extreme metal record. I don’t subscribe to the claims that it’s any sort of classic. It’s clearly a couple of steps down from the best work of the Burzums & Wolves In The Throne Rooms but it’s still a damn enjoyable experience that has a reasonable amount of success in creating a distinctly Ukrainian black metal sound built around melody & atmosphere.

For fans of Ygg, Winterfylleth & Wodensthrone.

When it comes to atmospheric black metal, Drudkh can justifiably be considered one of the prime movers of the genre, despite a bit of a drop-off during the early part of the 2010s, and are one of the bands, along with WitTR and Winterfylleth, who really got me excited about this type of nature- and folk history-themed black metal. For me, this is Drudkh's finest hour (well, fifty minutes actually) and one of the greatest atmo-black releases of all-time.
Unfortunately Drudkh have been dogged by accusations of far right sympathies, despite professing to being apolitical, and dedicating the album to Stepan Bandera, who was head of the Organization of Ukrainian Nationalists (a group labelled as fascist by many historians) isn't going to discourage their accusers any. Personally I am only interested in the music, having no time for extreme politics and will approach it in the same way as with Varg Vikernes' Burzum and pay no mind to the political connotations either overt or implied.
Musically the album takes the form of an atmospheric wall of sound that towers over the listener like a great mountain range or gathering thunderheads, both expansive and airy, but also threatening and dark. The production is great and allows the music to fill every space, from the faint echoing on the drums and the rumbling basslines to the crystal-clear riffing and emotion-filled vocals, every members part is given life and allowed to shine, none to the detriment of any other. Most of the songs are around the ten-minute mark and, as is typical with most atmospheric black metal, they feature a fair deal of repetition, but that is not a criticism, the repetition feels as if the band are laying down a series of layers that build up the album's atmosphere. Occasionally there are some really nice melodies, as towards the end of Furrow of Gods that, I guess, are based on Ukrainian folk music. The album also features some excellent soloing that is unusual in atmo-black, although it doesn't jump out and take over the music but is still fundamentally a part of the whole, like in any good ecosystem. The lyrics are taken from poetry by well-respected Ukrainian writers of the nineteenth and twentieth centuries such as Oleksandr Oles and doubtless extol the beauty and majesty of Ukraine's natural landscape.
As I said at the start of the review, this is Drudkh's best album, but I would go further and say that it is, debatably, the best atmospheric black metal album out there.